Salt for Sauerkraut? DIfference from Sandor Katz's Fermentation books? Kefir folklore?
Cal, I really don't know, but if they function like salt in all other uses, I can't see any drawbacks. Great question, wish I could help!
show more
9 years ago
food preservation
Wardeh's recipes - how traditional are they?

Recipes are mostly traditional and not way out there. Though I think this book has a bit of everything and that's what makes it special.

Chris Kott wrote:Thanks, Wardeh. My opinion on the first taste question is mixed. I tend to think about my first experiences as a child with such things as pickles, which I didn't like, along with sauerkraut, though it was the polish version, and as such introduced in a cultural context it was accepted as a staple, and so I didn't give it any thought. Then there was sour cream, which again features heavily in polish cuisine, and yogourt, which, in all its various flavoured forms, was always one of the easier things with which to interest an otherwise disinterested kid. And then there is the case of buttermilk, which my grandmother swore by, and to this day I still can't stand. My inclination is to think that early experimentation with fermented foods were likely borne of desperation and lack of other food. I think that once people started to keep their foodstuffs a little longer letting them ferment at the end, someone likely stumbled upon the fact that, with proper storage, fermentation can be used to store the surplus of food that would otherwise spoil before it could be eaten, and so would not be bothered with. I think it reasonable to assume that fermented food caught on because it allowed for the longer-term storage of surpluses of food, making survival easier. I would guess that the health benefits of fermented food would have been largely overlooked; I think fermented food would have started as a survival food, a way to keep food long enough so that people didn't starve to death before the first greens of spring became available. In light of the fact that it would already have been keeping them from starvation, I think they would have stopped looking for other benefits at that point.
The cross-cultural common threads, though, culinarily speaking, are a puzzle. Would fermented food been a choice of travellers, and that the travels of normal people that didn't make it into the records spread the idea of pickled cabbage?

I agree that the storage issue would have been huge for these people. I think the healthfulness of these foods would not have gone unnoticed and was probably made a priority, though. Fermented and sacred foods were often reserved for the young or others with increased need for nutrition (like conception and pregnancy).
show more
9 years ago
fermentation
History of Fermented Foods

John Polk wrote:I find it interesting that the northern Europeans created saurkraut, while the Koreans made basically the same thing with their kimchee. Two widely separated cultures determining that an easily grown plant could be fermented, and stored for winter use.


Yes! I love this.
show more
9 years ago
fermentation
History of Fermented Foods

Chris Kott wrote:I just thought of another observation, a point in favour of the alcohol first theory. There are many different varieties of many different species of fruit that stay on the tree or vine or cane or whatever long past ripeness, to ferment within their own skins. I think it reasonable to suggest the possibility that pre-agrarian hunter-gatherer societies may have been able to make the leap easily enough from eating fermented fruit off the vine, likely getting intoxicated without any prior exposure to alcohol, to gathering said fruit for later consumption. It follows from there, especially if the fermented fruit were being stored in skins, that the anaerobic conditions' effect on the fermentation might even have been noticed and capitalised upon. What do you think, Wardeh?
-CK

I can confirm a huge increase in Vitamin C in sauerkraut!

Others...
incredible reduction in lactose when fermenting dairy
production of vitamin K2 when fermenting soy as in natto
show more
9 years ago
fermentation
do multiple ferments in a household affect each other?
I love that! Our is a house of culture, too!

You can have cross contamination. Once I had my sourdough starter going right next to a batch of cheddar and the cheddar didn't work. I learned my lesson on that one. But most of the time, I don't have issues with it.

What I now do when making cheese is add the culture when the milk goes in the pot, even before it is up to temperature. This protects it from cross-contamination (not 100% but I haven't had a problem since I started doing this). Here's a video I made on youtube about it. 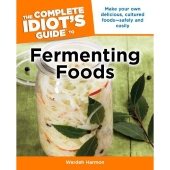 Welcome Wardeh Harmon, author of The Complete Idiot's Guide to Fermenting Foods
Thanks for the warm welcome everyone! I'm sorry I missed yesterday's questions (chasing them down now...) My internet went down yesterday afternoon and just came back up this morning.
show more
9 years ago
cooking
New to Fermenting: is salt, veggies all I need?

Michele Gila wrote:Love to eat them, new to making them. So do I really need some sort of additive to get veggies to ferment? Or can I just use simple ingredients and sea salt and let nature take its course? Thanks in advance!

Salt and veggies is all.

If you ferment fruits, you need a starter culture.
show more
9 years ago
fermentation