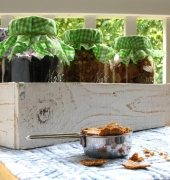 Puff grain cannon for home made breakfast cereals
The video is really cool and the POOF is very exciting. But I wonder, could one do this in a presure cooker? you probably would not want to just release the lid but it seems like what you are after is building up heat and presure and then dumping the presure all at once while maintaining the heat. Perhaps the safety valve on the presure cooker would not release presure fast enough though. I don't know.
show more
8 years ago
homestead

How To Keep Mounded Beds From eroding?
I have not done this yet so I don't know if it will work but my plan is to fill my paths with wood chips so that the soil doesn't wash into them too much. I also left some grass on the edges of the beds hoping it would keep the shape solid and that seems to be working so far. I have not noticed much encroachment even from the bermuda.
show more
8 years ago
organic

Multifunction outdoor rocket system
That is really amazing Matt. I am scheming for down the line a bit. Posted another thread on my idea, which is to build a rocket powered homebrew rig. seeing that kettle steam up there gives me hope that my idea might just work!
show more
8 years ago
wood burning stoves

Abe Connally wrote:The US throws away more than half of the food/biomass it produces. So, right there, if we managed our waste streams in a better way, we could support 50% more people on the exact same land and inputs that we are currently using.

The "Myth" of Sustainable Meat?
I thought Joel's response was good. If a little defensive, but you have to defend yourself sometimes.

On a lighter note, I thought this sentence fragment was amzingly aliterative


"pulsing of the predator-prey-pruning cycle on perennial prairie polycultures"

show more
8 years ago
food as medicine
Coprinus comatus?
I love shaggy manes. But I think they are best eaten for breakfast. My wife would, once in a while go out for a run and come back with her shirt full of shaggy manes that I would saute with a little onion and garlic, add cream and serve on toast. mmmmm. drooling now, and I already ate lunch even.
show more
8 years ago
fungi

R wannabe wrote:Any one that says 'X is the ONLY way' is stupid, ignorant, or has an agenda.

All ecosystems are LOCAL!!! What works for me doesn't work for my friends down the road, let alone a whole nation or the world all doing the same thing. What worked a thousand (or hundred or even ten) years ago might not work today as we have changed the ecosystem by our presence.

As far as the local vs. transport thing--it isn't so easy. If you grow that food where it grows best and then transport it, it could be less total input than if you try to grow it local in a less than ideal growing region. Local can add resilency to the food supply--whether it is from fuel shortages or large crop failures--but it is hard to feed a city either way. It isn't an easy thing to balance on the national/world scale.


Hear hear! I will say though, that instead of transporting crop X from where it grows well to where it doesn't perhaps it would make more sense to find a crop Y that grows well in places that crop X doesn't but provides similar utility.
show more
8 years ago
food as medicine

greg patrick wrote:OK, I'll bite. I don't see planting yams and spreading compost over hundreds of millions of acres as a viable option. I will admit that the area under my deciduous trees is pretty mulchy and nice, but taking acreage offline for a generation isn't necessarily a great option either when running cattle over grass would provide food and restore the land immediately.

First a quick disclaimer, I am a vegetarian (not vegan, ovo-lacto) and have no problem with folks that want to eat meat. Also it's been about 15 years since I took an anthropology course so my memory may be playing tricks on me. Additionally I have not read much about Joel salatin and his techniques.

Okay on to my actual point.

I remember from that 15 year old anthro course that one of the major causes of the dust bowl was the removal of bison and replacement with cattle. Bison, with their pointy hooves would actually aerate the soil thus increaseing the productivity of the plains not only through the dropping of manure but through the encouragement of aerobic soil bateria, opeing up of grass root zones etc. While cattle with their flat hooves packed the soild down and made it harder on the microbiota, worms, grasses, prairie dogs, etc. How is this addressed in modern sustainable grass farming? I can see raising bison on the plains being really good for the grass lands though, and they are an excellent nutrient dense food animal (As i typed that I got a little twinge of concience for thinking of any animal as simply 'food' but that's neither here nor there).

I think that an important thing to remember, and something that is often overlooked by 'militant vegans' as well as militant meat eaters (not talking about y'all, just saying that there are people that don't think vegetables are edible) is balance. are animals vital to the health of an ecosystem? of course. To think otherwise is foolishness. but so are plants, fungei, etc.

someone mentioned the importance of local production. I think this is more important that any other aspect of production. The added inputs needed to transport anything 1,000, 2,000 or 13,000 miles is never going to work out if you take petroleum out of the equation.
show more
8 years ago
food as medicine
Combining passions
Hey all,

This is still a very doughy idea but I thought I would put it out there for ideas anyway. worst case scenerio is no body responds. Well here goes

I am a homebrewer and love to brew beer, however, as much as possible I would like to step lightly on the earth and brewing has some seriously questionable environmental effects. I try to buy only organic ingredients and I buy as local as I can. These two goals can sometimes interfere with each other but that is another story.

"So where's the stove question?" you may be asking.

The BIGGEST worry I have is that I use propane to do the actual brewing. this involves heating around 15 gallons of water to around 180f and then maintaining a temp of around 150f for 1-2 hours and finally boiling around 13 gallons of liquid (now very full of sugar) for 1-2 hours.

**EDIT**
I am also considering working a solar water heater into the equation.
**END EDIT**

The maintaining step I accomplish with a big ol' beverage cooler but the initial heating and boiling is all propane on a big outdoor gas burner. So I was on here reading about RMH and I started to wonder if it would work for my purposes.

Two or three separate heaters, one for heating the water, one (or possibly a cooler area on the first) for maintaining temps (thus less plastic in my setup) and a third (or second) for doing the actual boil.

The additional idea I had was to creat this structure on three levels so that after water is put in the top I can move from one station to the next via gravity alone.

So other than the fact that this starts to look like a 15' long masonry behemoth does anyone have ideas? Critisisms (except of my spelling, no spell check on this computer). laudits and praise also gladly accepted.

100% natural way to eliminate yourself
Speaking of a platform for pooping, I had a professor back in College who designed and attempted to market a movable stand to allow for this on standard western toilets. I doubt they are still available though. This was back in the 80's that he was trying to sell them. He eventually added a magazine stand so you could read while performing your necesaries and managed to sell some of them by not mentioning the original purpose too much.

The one benefit to having a small bathroom is when the toilet is positioned faceing the tub. Then you can put yoru feet up and relax