superinsulation, how I did it.
Sorry this is very old. Wonder if I can still ask, what your heat loss numbers are/were like?
How did you heat it?

We are looking to build a new home here in VT, and I am trying to wrap my head around how to do this so it is very efficient without causing the price to skyrocket!

With a full 2 story building and unused attic, I think going R60 in the attic should be easy enough by blowing in cellulose. Default specs on this home are R50 cellulose in the attic already.

The basement is where I am not sure. I have seen suggestions to put rigid board under the foundation and basement walls, but have also heard of people just insulating the ceiling (floor joists of 1st floor), then basically leaving the basement unconditioned otherwise. The stock specs of the home call for 3" Thermax, which is ~R20. Prefer not to use spray foam whenever possible. Windows will be tricky also, as they seem to be able to add a lot of cost. Luckily, the home has great southern exposure.

One of things I was hoping to do was basically "steal" money from our HVAC budget and give it to insulation budget, and then be able to heat the home with 1 well placed Rinnai unit (their biggest one is about 38k btu - cost $1300), however it is only 83% AFUE, and then doing an on demand HWH, or .82 EF tank heater (Both about $1300 also). 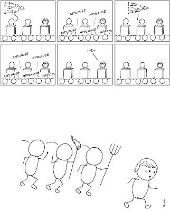 reason for permaculture, or in other words, is that trip really necessary?

Rob Meyer wrote:I live in NJ, the most densely populated state in the country, in a city too. It's not the most populated city by any means (actually, it might be the least populated city in the state), but I've been learning about and trying to apply permaculture for several years now. There's a group of people who are meeting in my town to integrate permaculture into our overall plan for the future, th rough the Transition Town model. Also, there's quite a vibrant and up and coming permaculture community throughout the state, and most of it centers around the urban areas, including new brunswick, jersey city, belleville, camden. Not to mention the fact that philly and new york have frequent permaculture events and several permaculture projects that I'm aware of.

It's not just about going back to the land. It's primarily a way of designing things (any and all things, including technology, cities, whatever) that models itself after ecology, focusing on the relationships between things instead of each individual component. So for a city, you don't view sewage as a substance that should be taken as far away as possible to be treated by chemicals, but rather look at the sewage itself for a function it could provide to some other useful element that might be desired, such as fuel (methane), fertilizer for plants, or possibly even using plants themselves to treat the waste. The ideal in permaculture would be to install composting toilets in every housing unit, which could then be harvested once safe for use, and used to grow food on the roof and balconies of the building. This turns an expensive waste disposal process into a useful resource. That's one of the main ideas behind permaculture, produce no waste, just like a healthy ecosystem.


out of curiosity, where in NJ are you?
show more
8 years ago
permaculture

How much do you charge or pay for fresh chicken eggs?
It ranges from $4-6/dozen. $6 is for certified organic free range. $5 no gmo free range. $4 free range .

How much would you say that it would cost a family enough to maintain a flock enough to provide 2 dozen per week?
show more
8 years ago
farm income
Opposites Attract; I'm into Permaculture, my wife is not

Matt Leigh wrote:Is anyone else in my situation. I want to live in harmony with nature while my wife wants to live the standard Mid-western suburban lifestyle. She wants to keep the lawn while I want to whole yard to be a garden. I would rather live in the country and she wants to live next to the mall. I want chickens goats and bees while she wants a de-clawed indoor cat. Any advise on how we can live in harmony? (Please no "get a divorce" responses since that is out of the question)

these are some pretty serious differences. What amount of compromise will she have. Can you turn half of the yard into a garden?
show more
8 years ago
homestead