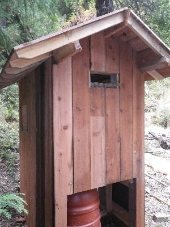 Can we talk about wood chip clay?
Chip Slip Sauna

http://www.dayonedesign.org/blog/page/1
show more
10 years ago
natural building
EcoBling---Is There a Below Zero Side to the Wheaton Eco Scale
If it's possible this is the word to describe it.

show more
10 years ago
meaningless drivel
anyone building with tire bale or earthbag in cold climate?
Tire bale just confuses me. Other than getting rid of a lot of tires I’m not sure what its benefits are. Thus far it intrigues me not at all.

I’m currently working with the county to get an earth bermed, rammed earth tire structure permitted. The intent is also to put up a hyperadobe structure of some sort so as to get experienced with it. The rammed earth tire structure is to be shotcrete inside and out. Both will be insulated on the outside, probably with straw. The interior walls of both will be a made of light straw/clay brick or cob depending on what is trying to be achieved. Both will be oriented to take advantage of solar gain in the winter.

This winter has not been bad but generally speaking we have -15 to -30º F for part of the winter.

show more
10 years ago
earth bag
Planting from flats
My first greenhouse was connected to a south facing window of our house much like a window air conditioner. This allowed the plants to be outside, under plastic and protected from wind and rain during the day. It also allowed the heat generated by the sun shining on the greenhouse to be passively circulated into the house through the open window during the day rather than needing a fan. A big advantage was the sunlight being reflected off the wall and striking the plants more evenly thus preventing the leggy, leaning, growth seen so often in plants grown on a window shelf with sunlight touching only one side of the plant. In your case this could be built large enough for 4 flats of starts and the flats brought in the house at night and the window closed to conserve heat. As the plants get older and need hardened to cooler temperatures prior to transplanting leave them in the greenhouse overnight.

Cucumbers: I find the best early results (if wanting to get a head start) to be germinating them indoors, 3 to 4 seeds in a pot about the size of an 8 oz cup or a little larger and letting them grow to the first true leaf (and no more than two true leaves) and then plant out. Cucumbers roots head to the bottom of the pot as soon as they germinate. The faster they are transplanted to the garden after the first true leaf is of a decent size the faster they are allowed to grow their roots deep in the garden instead of becoming rootbound in the pot. The same thing goes for watermelon and cantaloupe and squash.

Tomatoes: My best results are planting in a deep narrow container and allowing to grow to two true leaves. I then slow the growth down by cooler temperatures at night and then plant to the garden. If grown in too large of a container a lot of the soil falls off because root development was mostly down. This is not necessarily a detrimental thing just a waste of purchased potting soil. I have planted as young as 1 true leaf which allows the narrow container to be less deep. I plant up to the first true leaf in the garden.

Broccoli and cabbage: I sow in a wide not too deep container and then once they are of two true leaves I transplant above the cotyledons to individual containers. This helps me prevent them being leggy. Grow with cool night temps as they get larger.

Water the plants in the morning if in a window greenhouse so they don't dry out while you are gone during the day. My father-in-law commented that if you’re a little late milking the cow things were okay but if you’re late watering a tiny tomato it is a goner.
show more
10 years ago
organic
Planting from flats

Chris Dean wrote:A word of caution on planting directly, make sure you keep an eye on your seedlings. My first year of planting I scattered almost all my seed, and then found out too late that pill bugs were eating them all as they emerged. Not discouraging you from it, but in addition to watching them closely it may help to sow a portion and see if you have any problems before sowing everything.

Chris is right. Which leads us to: https://permies.com/t/11913/permaculture/Controlling-pill-bugs
show more
10 years ago
organic
Planting from flats
I would direct sow in your climate. Sowing in flats does a few things. You can control the germination temperature better. You don't need to thin as you will be transplanting far enough apart. You get a head start when there are still morning frosts. The plants do not need to compete with faster germinating/growing plants.

When they say to start in the refrigerator I think they are trying to imitate the conditions as if the seed spent the winter outside (stratification). Go ahead and follow those instructions unless you can accomplish it outside now.
show more
10 years ago
organic 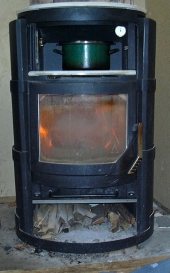 Questions for Ernie and Erica----Large RMH
Dale, I've got a piece of 8' diameter by 15' long by 1/2" wall pipe if you need to upsize your outer barrel. Hahahahahahahaha
show more
10 years ago
wood burning stoves
Cob House Washington County MO
If a cedar is going to support the center what is going to support the perimeter of the roof?
show more
10 years ago
cob
Exploring Water as the Primary Thermal Battery for Rocket Mass Heaters
So I finally bought the Rocket Mass Heaters book from http://www.rocketstoves.com/ and read it. Holy smokes people have put a lot of effort and thought into these things.


John Sizemore wrote:Problems with water would be construction cost. The materials would need to be welded in place and of higher strength.
Moisture. Hot water equals vapor and unless your tank was covered your home would become s steam room.
Calcium builds up in the water tank.
Legionnaire’s disease. It is a problem in hot tubs and other water bearing indoor locations. You would have a petri dish in the center of your home.

I can't argue with you there. The costs/difficulty of construction will go up depending on the configuration and one's scrounging ability.

To avoid indoor moisture buildup the water storage will need to be vented to the exterior in some manner. There may be other options. I haven't researched this one yet.

If calcium/mineral precipitation will be a problem I'm assuming distilled water can be used.

Legionnaire’s disease is a valid concern. I'm not sold on the idea of using a large volume of water which eventually ends up at the hot water heater as being wise. If not much hot water is being used and the water is held at the wrong temperature for too long prior to hitting the water heater a lot of bacteria growth can occur.

140º F will kill the Legionnaire’s bacteria. I suppose one needs to be aware and take the temperature of the water thermal mass above that on a regular basis. I have done no research to see what other options there are.


Dale Hodgins wrote:I think it would be important to ensure that the water is not allowed to cool the effluent before complete combustion is achieved. Wood stoves with water jackets are prone to creosote buildup if unburned hydrocarbons go up the chimney. The heat riser and several feet of pipe may need to be far hotter than a water jacket would allow.

Definitely the water will have to rob the heat after the heat riser to avoid the problems you’ve mentioned.


Dale Hodgins wrote:It would be a shame to have a giant water tank like this for thermal storage only. Water could be drawn off to heat a hot tub and for regular domestic uses.

It seems the Legionnaire’s risk will preclude the drawing off of water unless the 140º F can be maintained. If one desires to pre-heat the hot water heater feed I think coils robbing heat from the rocket mass heater water mass will be more prudent. The challenge will be preventing bacterial growth in the rocket mass heater water mass which, theoretically, one will not be contacting on a regular basis anyway.

That said 140º F may not be that hard to maintain for an extended period depending on how large an area one is trying to heat.

In this thread, https://permies.com/t/12344/stoves/Rocket-Powered-Sterling-Engine-water Dale has proposed the coupling of a Stirling engine powered generator with the RMH to produce electricity (along with other mechanical needs such as water pumping and clothes washing) while using water thermal mass as the coolant for the Stirling engine. After much consideration it seems to me that in order to most effectively use water as the thermal battery for a RMH the water needs to be located at floor level. In other words, if I understand how a thermo siphon works, if one if going to use a passive means to heat the water thermal mass the thermo siphon is doable but only if the tank is located higher than the heat source. Am I understanding this correctly? This would not allow the water thermal mass to be located in a cob bench unless the RMH was sunk below floor level significantly. Dropping the RMH below floor level may have it’s usefulness as can be seen in this thread: https://permies.com/t/5937/stoves/rocket-mass-floor-heater-finally. But can one really heat below the floor and a water thermal mass located in a bench on the floor? I suppose it’s a function of how long the burn is.

It seems to me that in order to realistically use water as the primary thermal mass one needs the ability to move water around on an active basis utilizing steam, a steam powered engine/pump or a Stirling engine powered pump. In other words to really utilize water’s heat storing/transferring ability well the ability to circulate the water though various connected by piping water storage vessels and through the heat exchanger piping either next to or inside of the RMH barrel becomes necessary. I am continuing to research what is the quietest and most simple method to actively circulate the water without steam.

Questions:
1) Is anyone familiar with a passive design for circulating water which works with the water tank and heat exchanger being at the same level? For all I know there is a simple method of passively circulating the water and I’m not bright enough to see it.
2) What is a simple, quiet pump design which can utilize Stirling engine principles to actively circulate the water?
3) Is there another mechanical, quiet, simple design which can utilize the heat generated by the RMH to pump the water?

Thanks for your input.

show more
10 years ago
rocket mass heaters
Rocket Powered Sterling Engine-water cooled, effluent to thermal mass
As I've been considering the ramifications of utilizing water as the primary thermal mass for a rocket mass heater I have come to the same conclusion. There are situations where electricity or a mechanical force is needed and a stirling engine or steam engine coupled with a rocket mass heater could provide those. I was up way late the night before last researching both.

The rocket mass heater has a great ability to heat water but getting that water to move to precisely where you need it is a problem. A pump powered by a Stirling engine or steam engine would be very useful and waste heat becomes a non-issue as it is captured somewhere. I think this is a perfect example of using technology to empower the individual.
show more
10 years ago
rocket mass heaters