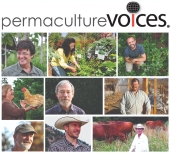 Jae Sabol II wrote:Any chance we could get a downloadable file with all these videos in it? I watch these while commuting and they crush my data. I could screen capture them all but it would take significant time so a downloadable zip file would be really helpful. The MP3 suggestion would be nice too, but there's enough visuals in these that I'd really prefer a zipped download so I can load them directly on my phone. Any possibility of this?

It is a good suggestion, but not something that we can offer at this time.  For now they are only streaming.
show more
3 years ago
permaculture voices
Paul Wheaton on Hacking Kickstarter, PDCs, Haters, Failure, and Doing Epic S*** [PODCAST]
Paul joins me to talk about his new Kickstarter and what he’s learned over very successful Kickstarter campaigns.

He also discusses what makes a good PC, choosing the right PDC, and how he deals with the constant hate that people throw his way.

Listen to the podcast on Permaculture Voices

show more
5 years ago
permaculture voices
Massive Influence - A Tribute To Toby Hemenway - Podcast Episode 150 featuring Paul
Given that Toby was a huge influence on me, I spent the last few weeks putting together a tribute to Toby Hemenway.  Paul and Jocelyn were two of the contributors to the episode.

The episode is a compilation of stories from peers, friends, and students paying tribute to Toby Hemenway who passed away on December 20, 2016.

Listen to the podcast on Permaculture Voices

On that page there are also 7 other podcast episodes featuring Toby and his work.

I hope that you enjoy these episodes.

My REAL Testimonial of Permaculture Voices 2015.
Awesome, love it. Thanks!

After listening to these and thinking a bit, there's a question I want to run past you. Would it be fair to identify all this in another way, as "the problem is permaculture for permaculture's sake"?

If so, I think that's a resounding human flaw in general.. The tendency to glorify one's niche at the expense of all others. Just look at religion (I say this as an Orthodox Christian). But, back in the world of soil.. I think it's the big reason why permaculture principles don't get a lot of traction in the ag world. Not that polyculture doesn't work (the chicken-egg of soy, corn, and wheat demand worldwide is another topic altogether), but it's easy to see people dancing in mud and ignore Mark Shepard. It's why Jack has a subset of his audience that is tired of him talking about permaculture, and another that can't get enough of it, but don't want to hear about guns. Frankly, it rears its head around these forums sometimes too.. among people who are supposed to be interested in the same thing! I think this might be what you're getting at when you talk about some declaring "It's not Permaculture enough!" when presented with a design or project.

What I'm hearing you say is we all need to take a deep breath, have a little humility, and, well, remember it's "people care", not "dogma care".

I think that is fair.

Part of what I am trying to do is distill out the BS from the truth. Too many people get sold the ultimate abundance of permaculture with grand promises and little models to back up those promises. This leads to wasted time and failure. So I am suggesting that each of us be our own skeptic and think a little more about what am I actually trying to do and what is the actually best way to make that happen if I look at the full toolkit and ignore perfection.
show more
7 years ago
permaculture voices
Podcast episodes 100-101
So, I see permaculture as the catch for a lot of people. It attracts people into this space who might not otherwise get involved in this space. What I am saying is that some people suggest that you can then just use permaculture knowledge to go on to ultimately purse your passions in a related field, and I think that this is wrong. Obviously everyone doesn't suggest this, but a lot of people seem to say permaculture is the answer to all. So I am trying to say, let permaculture attract people in, get them exposed to everything as they go down the rabbit hole. Then put the permaculture ethics in the back pocket and go study up on a specific subject that you are interested in from source of knowledge in that space.

For example, you could come into permaculture and then get into mycology and then go study with Paul Stamets or you could just find mycology and study with Paul Stamets. Are you actually better off going the first route versus the second? People seem to convey that you are for sure better off taking route one, and I would beg to differ that you are any better off.
show more
7 years ago
permaculture voices
Podcast episodes 100-101

George Meljon wrote:I listened to it a few minutes ago. I think it's a fair dose of criticism, but that criticism is not without it's generalizations and broad denouncements. The fact is, there is enough tension within the topic of permaculture that it would take hundreds of pages to discuss and critique at the level Diego and his source Mr. Harper are so in need of. But that's the calling they make. Somebody else would have to do that.

Lastly, Diego calls for people to go out and do agriculture and make a living doing it first, then layer permaculture on top. Then he says permaculture is the hook the brings people into farming. It's a clear catch 22. In general, I think the earth care- people care - return of surplus angle is important enough for anyone starting out that it can influence them in the right direction. Same with the small and slow solutions advice. You see a lot of people jumping into ag and buying all this equipment and going broke in 3 years. Diego even linked to a NYT op-ed piece by a young couple that did this, so I think he's too close to throwing the baby out with the bath water.

Read his article and then really start to think about permaculture and look at it through a critical lens. The criticisms may be generalized and broad, but so is a lot of what permaculture teaches. Broad generalization.
show more
7 years ago
permaculture voices

Permaculture Voices 2015
John Liu will also be there giving a talk on Wednesday.

show more
7 years ago
permaculture voices
who's driving to PV2?

Matthew Talicuran wrote:Hey I will be driving in from the east county San Diego as much as that helps. One of the things to consider is parking at the convention center its aweful. If you are driving in with a bunch of folks that are going to be doing the same things as you afterwards I would suggest group parking well away from the convention center and taking 1 car into the center parking. The peak traffic into the center can be bad as well as the daily price goes from $15 to $25 if there is something going on at petco park. Just a few thing to consider.

NOTE: The conference is not at the convention center. And it isn't in downtown San Diego.

DO NOT GO TO THE CONVENTION CENTER OR DOWNTOWN. YOU WILL BE IN THE WRONG PLACE.
You probably want to delete this thread to avoid confusion.
show more
7 years ago
permaculture voices
Permaculture Voices 2 - Podcasts with Speakers
This page has a bunch of newly recorded interviews with PV2 speakers.
Some of the information focuses specifically on PV2 - think how to get the most of out it. And some of the information is universally applicable outside of the conference world.
They are all various lengths, but for the most part they are short.

Today a new one was posted with Adam Klaus (who is active here on permies).

Big Steps Through Adversity with Farmer Adam Klaus
"I was just at a point where I realized that for me to make the next step forward with the farm, I had to make a big step."
How to evaluate the cost trade off for events, workshops, and other education material. What's the ROI?
There is a lot of value in being able to sit down, in person, with someone who has done what you want to do and pick their brain.
The emotional peer support at events is invaluable.