Jake Van
Posts: 32
1
posted 11 years ago
I have questions about the picture below.
1)It seems as though the pump is to run constantly during the day(assuming using PV). Is there a chance of overheating/over pressurizing the tank?
2)Would you need some sort of control circuit or t-stat?
3)Do on demand water heaters come on when fed with already hot water?
4)The cold water inlet provides the pressure to this system. Once it is full, would the cold water try to enter the system or would the heat bleed over into your pressure tank?

Peter DeJay
Posts: 104
Location: Southern Oregon
posted 11 years ago
1) The pump is probably connected with a thermo switch or a timer. it runs long enough to clear out the collector and fill the storage tank, then shuts off to allow the new batch of cold water to heat up in the collector.

2)no its a self contained unit. it automatically cycles on and off.

4)i dont follow your question. there is no pressure tank in this system.
Jake Van
Posts: 32
1
posted 11 years ago

rhymeswithorange wrote:
4)i dont follow your question. there is no pressure tank in this system.

Thanks for the reply! I meant the pressure tank in a well or cistern system which would be the cold water supply in this case. My guess is it wouldn't be an issue because when I feel the cold water supply pipe to my gas water heater, it is cool to the touch right where it goes into the tank (although I can't explain why this would be). Maybe there is some kind of special insulated or isolation fitting for attaching cold water pipes to water heaters.
Also 1 more question, is there a way to design this system so that it wouldn't freeze in the winter? I don't like the idea of a pipe filled with coolant going through my water.
Peter DeJay
Posts: 104
Location: Southern Oregon
posted 11 years ago
Ahh.. yes warmth travelling up the cold water supply to the HW heater is not an issue..it is physically impossible for it to heat up anywhere near enough to do any damage anywhere. Plus you are required by code to have a minimum of i think 16 inches of copper pipe on both the cold water in and the hot water out.

As far as freeze proofing, im sure there is a way. I hear you about the anti freeze running through your HW supply, but I must say that I've heard its actually more efficient to do it that way. Otherwise you would either need a drainback system for the cold supply to the solar collector, or else use PEX and cover it for the length that runs outside. Or maybe just insulating the copper pipe is enough? that would be a good question for an expert.
Jake Van
Posts: 32
1
posted 11 years ago
I suppose one could use a pet safe antifreeze. It takes such a small amount of regular antifreeze to kill you

ops: There must be a way to design a system so the collector drains when the solar goes off. The trouble would be to keep the pump primed after the collector drains into the house.
Posts: 44
Location: West Coast of Canada
posted 11 years ago
1. You would have a thermostat controlling the circulation pump.  It will shut off when the water is hot enough.  You would also have a pressure/temperature relief valve on the collector in case it overheated on a day when you weren't using much water.

4. Once what is full?  You mean once all the water is hot?  Cold water will only enter the system when you draw hot water out of it.  The amount of heat that conducts back down the cold pipe is negligible.


is there a way to design this system so that it wouldn't freeze in the winter? I don't like the idea of a pipe filled with coolant going through my water.

It's either that or you drain it when the temperature goes below freezing.

You can't put antifreeze in the water tank.  It would be a consumed item, so it would be expensive.  You don;t want to be drinking it, cooking with it or washing with it.


You can't put antifreeze in the water tank.  It would be a consumed item, so it would be expensive.  You don;t want to be drinking it, cooking with it or washing with it.

I'm talking about running a closed loop collector system with a coil in the tank with would transfer the heat to the water. I think a system like the one below would be just fine. I just dont want to use coolant (or any toxins for that matter) anywhere even near my water supply. I'm one of those wierdos who won't even drink fluoridated tap water

Rover wrote:
I'm talking about running a closed loop collector system with a coil in the tank with would transfer the heat to the water. I think a system like the one below would be just fine. I just dont want to use coolant (or any toxins for that matter) anywhere even near my water supply. I'm one of those wierdos who won't even drink fluoridated tap water

OK, gotcha.  That wasn't evident from the first diagram.  A closed loop system makes the use of antifreeze an option.

Still your only options are to use antifreeze or drain it in cold weather.  The pet-safe antifreeze is probably a better option than glycol, given your preferences.
Seren Manda
Posts: 62
Location: Northern Cali, USA -zone 9-
1
posted 11 years ago
Propolyne Glycol is an appropriate anti-freeze for a solar domestic hot water system.

Posts: 98
Location: Eastern Colorado, USA
posted 11 years ago
Your first diagram would be of a drainback type system, but it doesn't show that.  As shown, that could only be done in a climate where it never freezes.

The second type is your best option where you have winters.  There's absolutely nothing wrong with antifreeze in the heating loop.  It does not get in your water.

However, if that still freaks you out, you can do a two-tank system.  One tank would have two sets of coils -- one bringing in the heat from the collectors, and the other circulating out to the use tank to heat the water you use.  So one tank is strictly heat storage, the other your domestic hot water.  The loop between the two tanks could be water, since it would all be inside.  Hope that makes sense... hard to explain without a picture.

If you wanted to get really creative, I've seen a system that had a 1,000 gallon concrete cistern as a heat storage tank, with two sources of heat (solar and a heat exchanger from a stone fireplace) and fed off its heat to both hot water and radiant floor heat.  That could even be cheaper than buying those heat exchanger tanks.  You could think of it as a giant heat battery.  I can't remember how many BTUs of heat 1,000 gallons will hold per degree of temperature rise... but it's a lot.  Enough to heat a house through a couple days without sun in Minnesota, according to the article I read.
William Blakly
Posts: 1
posted 9 years ago
Interesting post. I think, the pump is directly connected with a timer and yes, its need some circuit. For more details visit: hiltonplumbing.com.au
Posts: 238
Location: AR ~ozark mountain range~zone7a
9
posted 9 years ago
I'm not a plumber, but it looks like to me, when you open your hot water tap, the cold water supply, simply by-passes the solar panel recirculation loop, the cold water goes directly thru your solar storage tank, and that might be why your water pipe is cool to the touch as it enters your on demand gas hot water heater. (see the pink flow line in the pix)

I don't know if installing a one-way check valve at that location will cause unsafe pressure, or other problems. 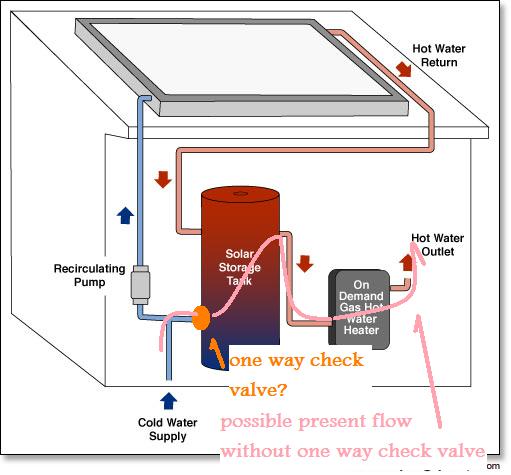 Brian Knight
Posts: 554
Location: Asheville NC
8
posted 9 years ago
Looks like a spammer dug up an old thread. I also think that the pic is a simplified visual aid and doesnt represent a real life scenario. But as James and others points out, check valves and other controls are needed.

Solar thermal is not for the faint of heart. They can be expensive, trouble prone and require maintenance. Unless one is doing most of the labor themselves its tough to make a system pay back the upfront investements. Steven Winter and associates studies on existing DHW systems is pretty disheartening for this technology although I feel more research is needed. Pools are a different story.

There are two things I dislike about the pictured system other than the lack of freeze protection. It appears the circulating pump is connected to the grid or main house power. These AC pumps can have short lives and usually have a big parasitic energy load on the system. I think a better solution is to use a DC pump (El Sid being most popular) connected to a small PV panel. Those pumps are much hardier and it doesnt require a control panel to tell it to come on (which can be tricky to set up and seem to fail often). When its bright enough to heat water the DC pump is doing its thing on its own.

If one has the proper location and climate, Heat Pump Water Heaters are a tough technology to beat. They are arguably much more cost effective than solar hot water.

"If you want to save the environment, build a city worth living in." - Wendell Berry