My huglekulture potato bed was a considerable disapointment!

Terri Matthews
Posts: 528
Location: Eastern Kansas
24
posted 2 years ago
The wood that I used had bugs in them, and as the swelling potatos touched the buried wood the bugs started eating the potatos. Fully 1/3 of my spuds had holes in them with bugs inside! There were roly polies and a cricket and such

The onions were OK, but then the onions are a shallower plant and not many touched any buried wood. In the future I will make a point to not plant potatos over buried wood!
Michelle Bisson
pollinator
Posts: 320
Location: Quebec, Canada
45
I like...

posted 2 years ago
Thanks for sharing so we can learn from this too!

Terri Matthews wrote:The wood that I used had bugs in them, and as the swelling potatos touched the buried wood the bugs started eating the potatos. Fully 1/3 of my spuds had holes in them with bugs inside! There were roly polies and a cricket and such

The onions were OK, but then the onions are a shallower plant and not many touched any buried wood. In the future I will make a point to not plant potatos over buried wood!


Great information.  I did potatoes this year but not on a hugel.   I haven't planted vegetables in hugels unless they are dug deep.   We did a keyhole hugel that we dug down about three feet and piled the dirt and amendments on top.   Stuff grows great.  The problem I had was using logs at the base to keep the dirt in place.  This area has become a mouse motel.  1/2 my vedge are eaten.  I'm hoping nature will kick in and send some snakes my way.
Chris Kott
pollinator
Posts: 3625
Location: Toronto, Ontario
504
I like...

posted 2 years ago
I'm sorry to hear about your misfortune.

I have had great success in growing potato guilds in my first and second-year beds, but I interplant with horseradish and garlic, and have many other scent-distracting measures as well.

I am also careful to ensure that there is a thick layer of mostly finished compost atop the woody matter, and then a layer of mineral soil, then topsoil, and more almost-finished compost on top, just under mulch.

I think that having enough soil between your spuds and the decomposing wood would be a good idea.

I also use marigolds as border plants, as well as sometimes between block plantings, especially if I expect there to be issues with soil-based pests. Most marigolds' root zones impart insecticidal properties to the soil in which they grow, some so strong (French or African, I think) that their use must be sparing.

Let us know what changes you make, Terri, and pics would be great. Good luck.

Dan Grubbs
pollinator
Posts: 685
Location: northwest Missouri, USA
94
posted 2 years ago
I took a slightly different path. I grew potatoes on contour. I used a bunyip level and determined a contour line on a slope within Zone 1 of my homestead. Along this line, I cut a narrow long bed in which to plant potatoes and hill them into a long row. This curved around the contour of the slope and captured the water running down slope. This allowed me to use very little irrigation for a robust harvest. It actually looked like a mini swale, though I wouldn’t call it that because structurally, it wasn’t designed to hold water. I harvested far more potatoes than I anticipated. I did have to fight the encroaching grass and weeds a bit, but that was more a management failure on my part, not a failure of the growing approach. Instead of potatoes, in this same “swale” this year I planted beets which did pretty well, too. Essentially, this is a long but narrow planting bed – 24 inches (60 cm) – on contour which is a kind of miniature terracing. I plan to keep the bed going forward and consider the approach successful; and, I will likely rotate various crops in this space to see what is optimal for this approach.

J Grouwstra
pollinator
Posts: 129
Location: Fryslân, Netherlands
53
posted 2 years ago
Like Terri's potatoes, some of my potatoes on the Hügelbeet were turning into a meal for beasties. I'm thinking voles in my case. In my opinion it's inevitable that you're going to attract all kinds of beasties if you're throwing a heap of organic matter in various stages of decomposition together. That's in part also the idea; you need the help with breaking it further down.
My original soil is extremely compacted clay, and the surroundings of my Hügelbeets are still like that. I think it's natural mice are attracted to my beds. The damage to my potatoes doesn't seem too bad until now, I've pictured the worst ones, most of them are unaffected. There are no little crawlers in them, that would be a lot more annoying.

There was no damage at all to the early potatoes, I've dug them up a while ago. Later potatoes are in the ground a lot longer, I always find they're more at risk from being eaten by something. So going for early potatoes on a Hügelbeet could be better than going for late ones. And I agree with a fair layer of soil on top of the raw parts of the Hügelbeet. 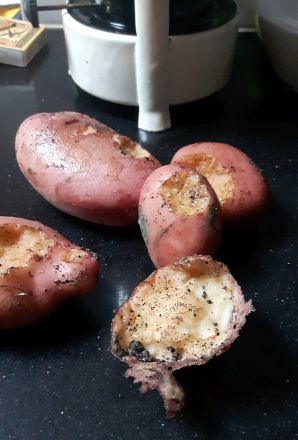 posted 2 years ago
Fascinating!  I did sweet potatoes (organic grocery store types)  in hugels last year and they did wonderful.  But I had them growing alongside other stuff, which probably deterred and distracted the bugs. (Fragrant citronella, bananas, blackberry, wisteria, and sweet olive tree. in the guild. and sweet potatoes as the groundcover and filler)  I had no pest issue at all

But then , I also regularly consume insect eaten food without hesitation. I have found the bugs tend to go for the best fruits first...

Let Peace Be Every Step