Give the grape another chance?

Morfydd St. Clair
pollinator
Posts: 181
Location: Hamburg, Germany
32
posted 2 years ago
When we started working with this Kleingarten, the previous owners had a plastic planter/arbor on the patio with a grape vine running over it (and the cottage, and anything else that stood still too long in the vicinity).  For 2 years, it leafed out, I saw little clusters of what looked like proto-grapes, then nothing.  A couple of years ago, we dug out the planter, gave away some roots, and planted the largest at the end of the patio to climb over a couple of linden trees.  It's come roaring back.  There are still no grapes.

Should I tear it out?  (Easier said than done - this thing is unkillable.)  Should I try grafting on something that I know produces?  (My neighbor's tasty grape is climbing over our mutual fence.)  It gets full sun, plenty of water, and heat reflection from the patio and cottage.  Is there a nutrient I can give it to convince it to produce?

Many thanks in advance!
Amit Enventres
gardener

posted 2 years ago
Sounds like a fruitless.  I'd tear it out and get a fruitful.  I'm not a big fan of grafting though so maybe someone else can chime in on the viability of that.

posted 2 years ago
Sounds like a great root stock, but might need a graft to get good fruit. Also, grapes do benefit substantially from thinning of the fruit/flowers. The fruit that do form will be much plumper and sweeter.

posted 2 years ago
If the grape isn't a fruitless variety, I think your main problem is that the vine is too big.

Grapes only grow on new growth, so all that old growth requires nutrients but produces no fruit.
If you looking at a vineyard you will see that they trim the vine back every year to a short stem with either 2 or 4 branches that are only 1/2 meter long or so.  All of the grapes grow on new growth that sprouts from those few branches.

It's kind of a trade off, the plant can produces lots of leaves, or lots of grapes, or a moderate amount of both.

posted 2 years ago
Usually you'd see some fruiting, especially if you'd cut it back,  but just in case,  this has some info on pruning generally useful to growing grapes. 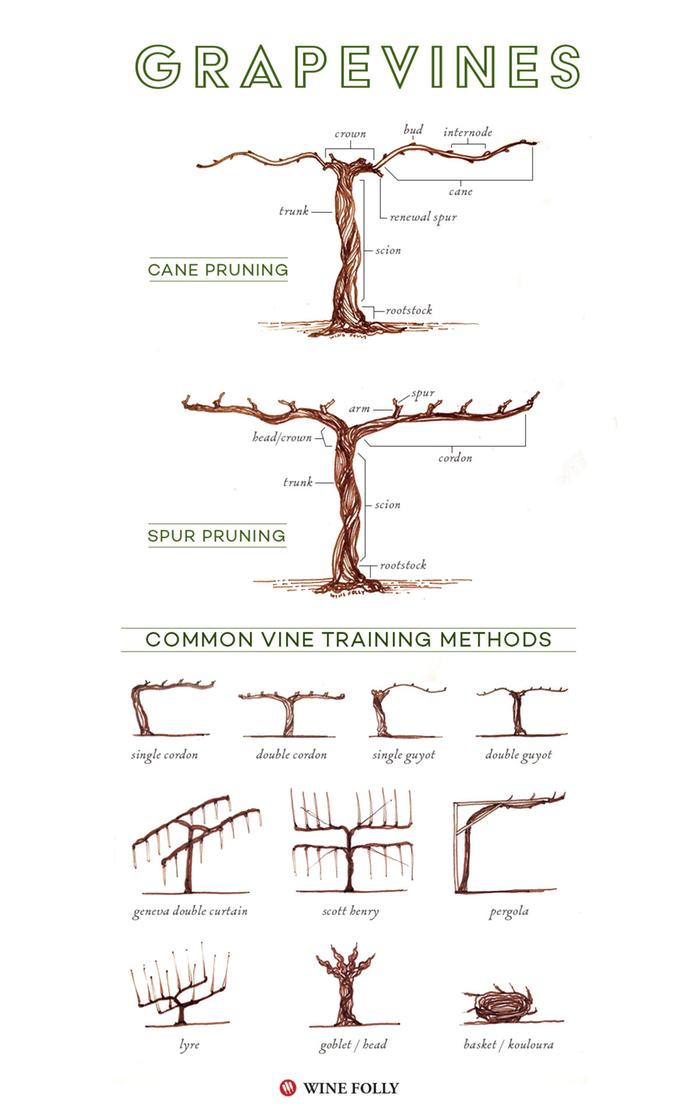 posted 2 years ago
I have similar grape vine, a volunteer from seed.
This will be second year I massacred it.
Last year it produced no fruit, but it did smother the black raspberry bushes.
My wife was not pleased.
So this year I ripped from 20 feet of fence and bushes.
I took it down, off the fence i had trained it to, and ran it down the fence line in the opposite direction.
I figure, even without grapes, its a robust plant with other uses.
As I cut the vine it bled profusely.
I tasted it,and it was fairly good.
I hate dolma,to me they taste like cigars look.
But I think the leaves might make a good potherb instead.


I also need shade for the house, and fodder for the animals, so I am practicing propagation with the cuttings.
Nothing special, just buckets of cuttings  in moist potting soil, covered by whatever is handy.
This creates a steamy humid atmosphere, moisture the cuttings can adsorb via their stomata.
At least, I think that is how it is supposed to work.


This same fence line has a mulberry that has never given any berries.
My wife frets about what the roots will do to the driveway wall.
I responded by cutting every last branch off of it.
I've done this twice, now I have another crop of pollarded poles ready to cut.
They happen to make the perfect marshmallow stick among other things.


I think that vine is a gift.
Do crazy stuff with it, you might do something amazing, and if it dies, no big deal.

Morfydd St. Clair
pollinator
Posts: 181
Location: Hamburg, Germany
32
posted 2 years ago
Thank you all for your information and suggestions!  I am trying to get it to grow up/into a pair of linden trees that will be heavily pollarded and pleached together so I've just been tying it into the trees and letting it do its thing.  I think I'll start some cuttings from my neighbor's grape* and look into grafting them.  I'll keep everyone posted!

*I'd only cut parts over my property line.  Even then I'd ask permission but he's never there as he got a garden closer to home.  I'd also want to get it this year as he's trying to sell the lot and I worry new people might cut the grape down.  If anyone knows someone in Hamburg who would like a gorgeous, immaculately maintained (until last year) Kleingarten, please let me know!