Colleen Oleary
Posts: 4
posted 2 years ago
Hi all! We recently bought a property for a small homestead and it is covered in Himalayan Blackberries! We have removed most of the vines and canes and are trying to dig the roots out but much of our soil is clay or rocky so it's extremely labor intensive. We want to do permaculture and Back to Eden method gardening and wonder if anyone has tried just cutting the canes down and covering with thick paper and THICK woodchips and having success eliminating the blackberries?
The network of roots is massive and they attatch to rocks and tree roots making it very difficult to dig out with a shovel or fork. I also hate to disturb my soil structure so much.
Any experience with this would be appreciated!
Kyrt Ryder
Posts: 947
Location: Graham, Washington [Zone 7b, 47.041 Latitude] 41inches average annual rainfall, cool summer drought
53
posted 2 years ago
That method will work if you are persistent to keep yanking the canes as they pop up. Eventually they will give up the ghost (and under mulched soil it will be easier pulling after a few months.)

Alternatively, pen pigs in with the blackberries until they dig up the rootballs.
Kim Goodwin
gardener

posted 2 years ago
We had the same problem. After years of trying to get rid of them (always naturally) by basically cutting them to the ground frequently, we finally went around and dug every one up that we could.  This was hundreds, in hard clay and rough soil.

Then we put cardboard and 6+ inches of chips over them.  And then pulled the shoots that came up.  They were much, much easier to pull then, and would just pop out.  They still came up again for years.

This may sound grim, but it's what happened in our case.  Western Oregon, coastal range mountains, deep clay, zone 8-ish, perfect blackberry haven.

What made the very rough process of digging them up easier - we hired someone to help.  And worked together.  We also did a large area of salmonberries this way.

Incredibly.  More persistent than Himalayan blackberries IF in a really wet area.  Salmonberries have much larger root systems, overall.  We dug so many, could have done a study on it.  Salmonberries have huge, long underground runners.  They go many feet.  Whereas blackberries rarely had that, at least not as far.  The blackberries normally had a large tough ball, with much smaller roots branching off.  The  salmonberries also have a ball of massive chunk o' root, but with the long runners going off in many directions.  Which is why they form those amazing thickets.

At least, this is how it was where we were!  We expanded the garden by half by digging up a thicket of salmonberries, and a separate big, deep thorny hedge of blackberries.

Funny thing happened.  Not having a chipper, we put the blackberries and salmonberries into a pile in the middle of the garden, to burn.  Then it rained awhile more.  The pile was as tall as me and it started growing!  A massive blackberry/salmonberry mound in the middle of the garden.  When it was finally dry enough outside to burn, the growing heap was almost impossible to light.  It took many days, and re-lights.  Amazing plants.

But, this takes a few years, and I wouldn't suggest this kind of operation for a garden bed (it's better for converting it from one type of hedge to another). When I wanted to turn a trailing blackberry/salmonberry patch into my son's garden bed, I tried to remove as many roots as I could, and then layered paper feed sacks and even some old cotton shirts to make a barrier, and then covered that with inches of duckbedding, and then put potting soil on top. This actually worked out okay. Some of the blackberries came up (I'm sure if they were Himalayan, even more would have come up). But, like Kim said, they are easier to pull, and often come right out. I did have to do quite a bit of weeding, and during the hight of summer, I would visit the garden bed at least twice a week to pull out tiny little blackberry shoots. That was last year. I found about three so far this year, but they were really tiny and easy to pull up. It's also hard to tell how many are migrating in from other areas. But, I managed to have a garden that grew really well the first year, and probably would have done even better had I done a double layer of material to smother the ground.

In another area, I wanted to make a nice place for my daughter's pear tree. The intended area was all salmonberry and invasive blackberry. Since I knew I'd be planting the tree on her first birthday, I started prepping the area while I was still pregnant. I first cut down all the salmonberry and blackberry as close to the ground as possible. Then I layered feed sacks and covered with about 4-6 inches of woodchips. I noticed some salmonberries and blackberries popping up through, so I clipped those short and put another layer of feedsacks on top of the whole mulched area and then added another 2-4 inches of mulch on top of that. About 6 months after that, I planted my daughter's tree. It's been another 5 months since then, and so far, no more blackberries or salmonberries have popped up. We'll see what happens when spring and summer are in full force, though!

The area I mulched for my daughter's tree (thread: https://permies.com/t/69253/Pear-Tree-Daughter-Birthday): 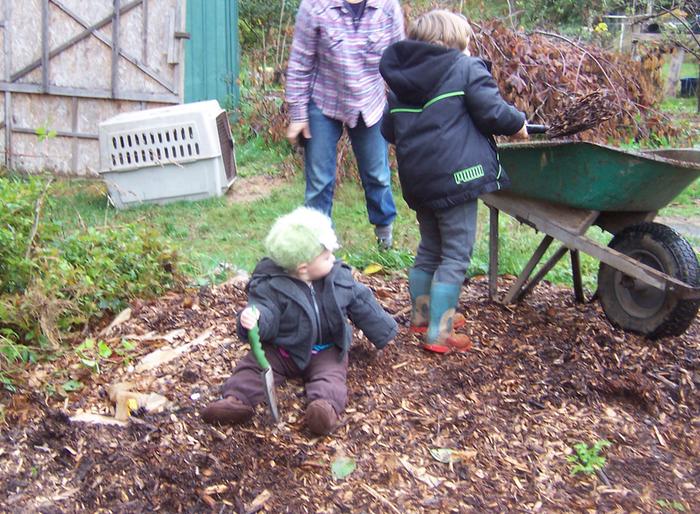 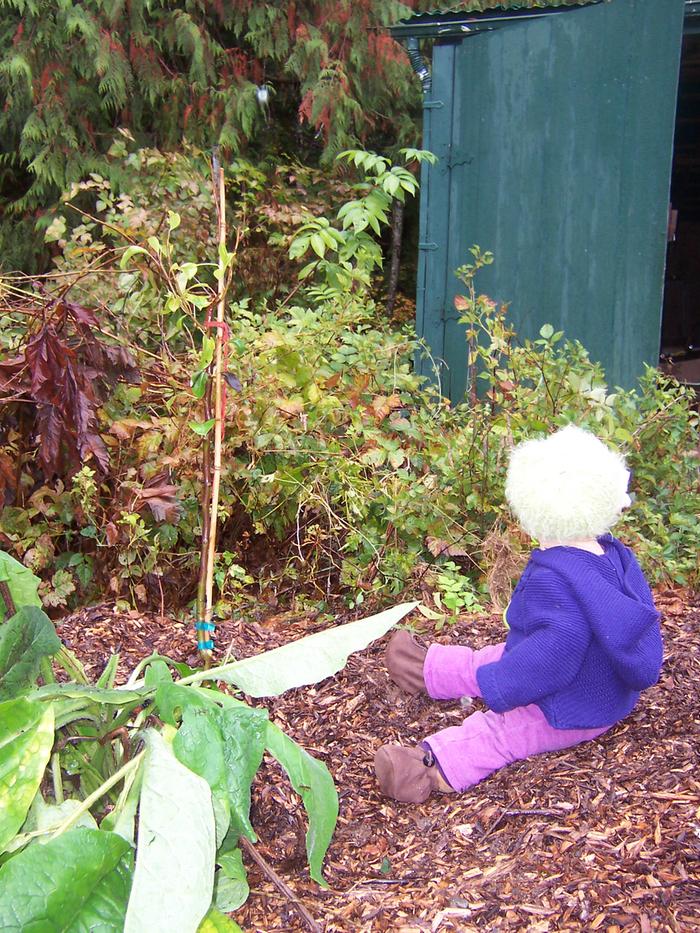 Here's my son's garden, with a before and two afters (thread: https://permies.com/t/58238/critters/garden-soil-poultry-poop-pine): 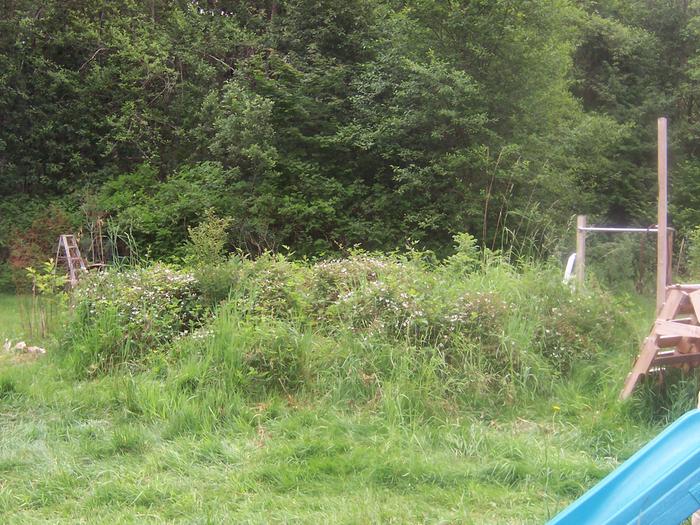 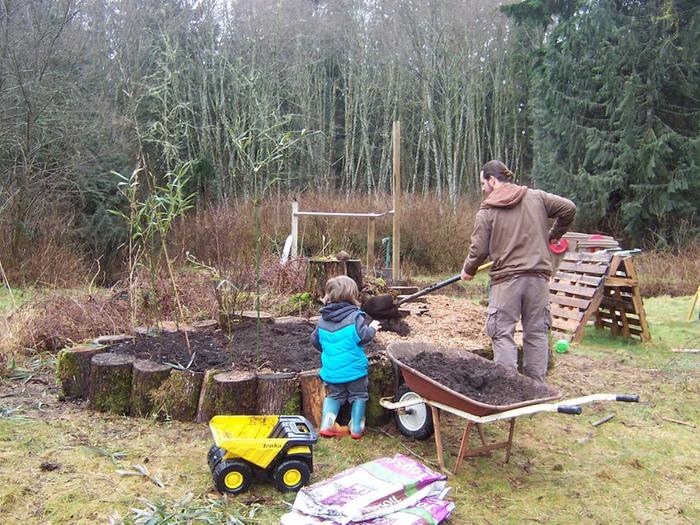 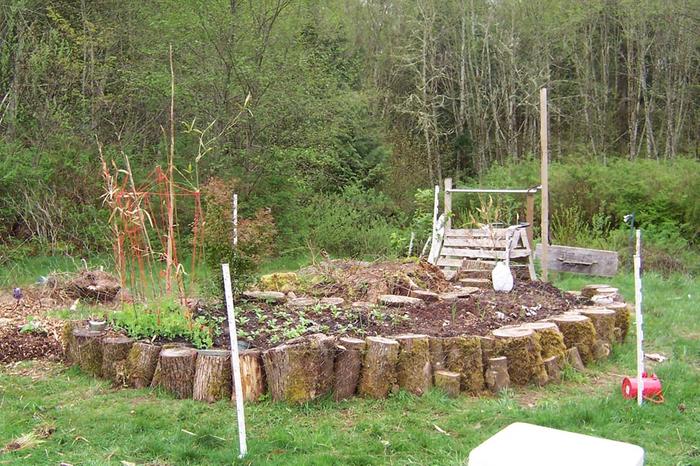 The Garden at Stony End
https://thegardenatstonyend.wordpress.com/


Primarily for juice/wine if I remember right?
Daron Williams
gardener

posted 2 years ago
I have been dealing with removing a bit over a third of an acre (14,500 ish square feet) of Himalayan Blackberries on my property. My solution was to use a gas powered mower the first time to get them all cut down. Since that first treatment I have been cutting them with a scythe every time they get up to about 1.5 or 2 feet in height. I find at this height they are really easy to cut with the scythe. It is a bit of work but it goes fairly quickly and the cuttings have been forming a nice mulch layer. This last fall and winter I saw a bunch of mushrooms popping up!

I'm now in my second year and while the blackberries that I have left alone (a small strip that is forming a nice living fence along a road) are showing signs of new growth so far I'm seeing only occasional signs of new growth in the areas I cut. I have been going through and digging up or just cutting the few that are showing signs of growth. I won't celebrate until it is summer but so far the blackberries seem to have been mostly knocked back. This was a very thick patch when I moved in that had been there for at least 30 years based on old aerial photos so I'm very happy with the success I'm having so far.

I have not tried to mulch the main patch but in other areas I have done some mulching on top of blackberries. They are very good at pushing through the mulch (cardboard and woodchips) so make sure to dig out any of them that do come through if you go that route.

I would recommend repeatedly cutting them back (about once a month) for the first year and then mulch the area in your second year if you feel like mulch is needed.

My long term solution is to plant things that will shade them out. I noticed that in my large patch that one section was not very thick and had sword ferns growing in it and even out competing the blackberries. This section was in the shadow of a large hawthorn. Just the one tree was enough to greatly reduce the growth of the blackberries on its north side. I'm planting a lot of native trees and shrubs in the main area that I have been working on since it is far from my house and is classified as zone 4 in my design.

Colleen Oleary
Posts: 4
posted 2 years ago
I really appreciate everyone's help and imput here!
Good to know that some have had success in this battle. It's a shame these plants are so unruly because they are actually one of my favorite berries. I'll probably keep a small amount at the very back of the property as a barrier and be able to enjoy some berries as well. Great idea about having it along the road Daron Williams. Good job in your battle with them!
I'll keep everyone posted about my success or lack there of. I was thinking along the same lines Kurt Rider and Kim Goodwin, as the ground gets softer under the cardboard/chips then the roots will pull up more easily.
Also Kurt, we have entertained the idea of a pig doing this work for us... I just have a family member whose not won over to this idea yet.

But it's by far my favorite idea!
I did hear of someone eradicating the blackberries by planting grass seed and the sod choked out a lot of new growth. He cut down the new canes with the lawn mower as he mowed the grass. Eventually had none.
But that takes years and we are itching to grow our own food and sell surplus at the farmers market and can't wait years to begin.
Thanks again and any other ideas appreciated!