Jon Piper
Posts: 20
Location: Central Connecticut - Zone 6
2
posted 11 years ago
Maybe I'm lazy, but I'm always trying to think up ways to eliminate the small amount of work involved in raising chickens... It would be great to just leave their coop door open and let them go in and out at whatever hour they please.

I figure chickens are very different animals from their predators, so there must be some kind of contraption that allows them entrance to a coop but not their predators. I have 2 possible ideas so far:

1. A chicken "seesaw" branch where the tipped up end acts as a booster step up to a high coop door.  The whole thing would be weighted such that the seesaw tips if something heavier than a chicken tried climbing up it

2. A chicken coop raised high off the ground with a tightwire streching from the coop to the ground. Maybe the wire would be encased in a loose length of PVC which would spin freely making it difficult for animals without wings to keep balance


Anybody every tried to rig something like this up? I'd rather not learn by trial and error...
John Polk
steward

Posts: 7926
Location: Currently in Lake Stevens, WA. Home in Spokane
333
posted 11 years ago
Predators do not fit one category.  Each has its own mode of operation, and own skill set.  I have seen a fox proof system commonly used in England that would be totally useless for raccoons.

Your seesaw system would work until 2-3 chickens used it at the same time.

posted 11 years ago
I've devised a so-far predator-light system (a snake got in one time).  Happy to post details if you need them.  Proof against raccoons, foxes, etc.

H Ludi Tyler wrote:
I've devised a so-far predator-light system (a snake got in one time).  Happy to post details if you need them.  Proof against raccoons, foxes, etc.

I'd very much like to see that. I too am a firm believer in "lazy farming".

I never fail. I don't believe in it. I only succeed at finding what doesn't work.

posted 11 years ago
I visited a permaculture property near me that had a fox-proof ladder for their chickens to access their coop. I've posted some pictures and a bit of description here:

James Stark wrote:
I'd very much like to see that. I too am a firm believer in "lazy farming".

Ok, I'll take some photos tomorrow to show how I made it.

Jeff Mathias
Posts: 125
Location: Westport, CA Zone 8-9; Off grid on 20 acres of redwood forest and floodplain with a seasonal creek.
4
posted 11 years ago
Once they are large enough you don't even need a ramp unless the opening is very high off the ground, then maybe just a perch or two they can hop or fly to but situated in a way that nothing could climb up to the opening.
For what is is worth; there are also a number of different ideas and possibly a purchasable product for automatic door openers/closers that I think I would look at if I had a real predator problem. Check out backyardchickens.com there is a lot of different solutions there regarding your idea.


"Study books and observe nature. When the two don't agree, throw out the books" -William A Albrecht
"You cannot reason a man out of a position he has not reasoned himself into." - Benjamin Franklin

posted 11 years ago
Here are the features I've found to be most important for predator-proofing our chicken house: 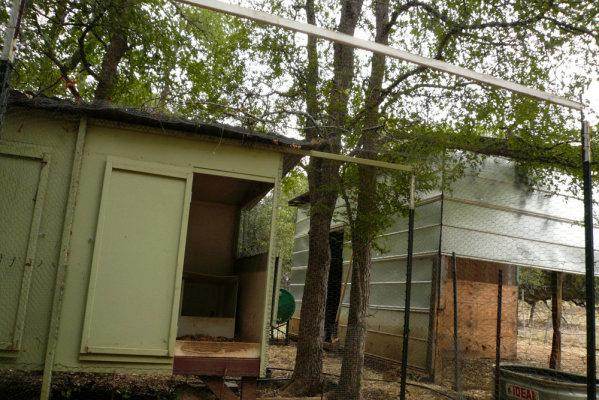 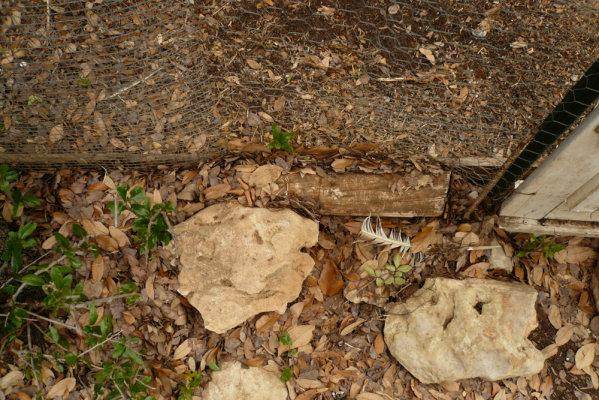 Half-inch hardware cloth on all outside corners so raccoons can't work in teams to spook the chickens into the corners and then grab them through the chicken wire (yes, this happened before I installed the hardware cloth) - 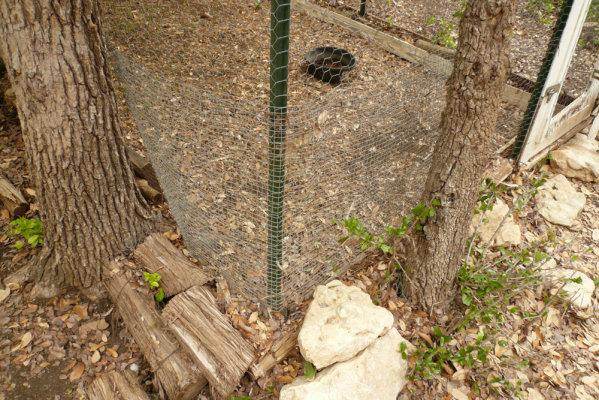 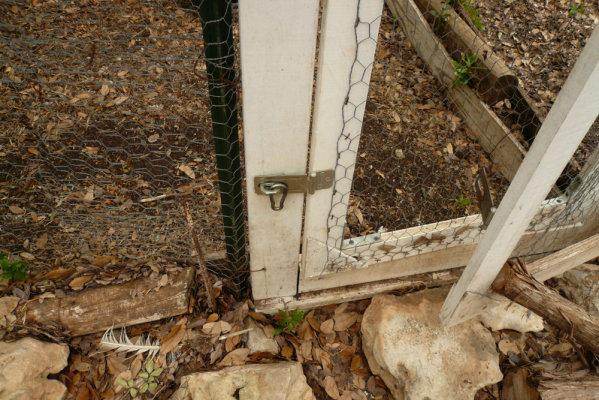 Jordan Lowery
pollinator
Posts: 1528
Location: zone 7
18
posted 11 years ago
ive been thinking about this as well and hopefully soon put it into practice as i want the chickens to put themselves away.

from what i can think the only thing chickens can do that most all predators cant do is fly(except for hawks and birds of prey but they hunt in the daytime). so if the door is high enough up for foxes and such cant get in or fit, and nothing to climb up on for racoons, snakes and such nothing should be able to get it theoretically.

the only problem i see is baby chicks wont be able to get in and out with the mom.

the fencing works great, but its expensive as hell.

i have a fenced in lot that is large enuff to  keep grass growing and then i let the hens out occasonally  for a few hrs just for the heck of it.  good for bug control.  but SUGAR BEAR is what keeps them alive.  both my coops have small doors on the hen entrances that shut and latch from inside but i dont shut them anymore except on the cold winter nights.  just to stop drafts.
Tyler Ludens
pollinator
Posts: 11842
Location: Central Texas USA Latitude 30 Zone 8
1170
I like...

posted 11 years ago
Beautiful dog!  I look at a big dog like that and wonder how I could possibly manage to feed him!

T. Pierce
Posts: 254
Location: Virginia
1
posted 11 years ago
feed costs believe it or not is at a very minimal.  i am pleasently surprised at how little she eats.  as i posted one other place.  there are some days, she doesnt eat at all.  her choice.  i buy a 40lb back a month  and some of that in the course of a month,  gets fed soaked to the fowl.  so figuring heavy thats lil over a pound a day.  the feed i buy is right at $30 per 40 lbs.

posted 11 years ago
$1 a day seems like a good price for protection of your chickens and plants!

T. Pierce
Posts: 254
Location: Virginia
1
posted 11 years ago
yes, im sold on this breed.  take the flock gardian outa their resume.  they are still a perfect family dog.  very loyal, devoted, and protective.  incrediably intelligent. and easy to train.  problem is, if they are for flock gardian, you cant make a pet outa them.    they will quickly be more devoted to you, than the flock.  mine was spoiled yet she still does her job well. hard to imagine how much better she'd be if she was raised correctly.
T. Pierce
Posts: 254
Location: Virginia
1
posted 11 years ago
back on the subject............

i saw this on youtube.  perhaps someone could modify this for chicken purposes.

v. Buckley
Posts: 1
posted 9 years ago
What breed of dog is that?
matt dee
Posts: 37
posted 9 years ago
I didnt really understand the second idea, but the problem with the first one
Is if two chickens try to go up at once.
I had hens ( and still do ). Up to about two years ago I let them wonder around the Farm wherever they wanted to go, and locked them in at night. After I Found my favourite hen massacared and the rest scared senseless I moved them into a different shed facing a field. I fenced off a good part of the field with metal gird wire. I haven't had any fox trouble since. So that's the protecting them done. And when you have broilers ( presumably ) a fox will always be on the look out.
And I would advise you close the door every night, for the health of the chickens.

Maybe I'm lazy, but I'm always trying to think up ways to eliminate the small amount of work involved in raising chickens... It would be great to just leave their coop door open and let them go in and out at whatever hour they please.

This is me as well and the most simple~and single most effective way~ I've found is exactly what you describe in the bolded print....leave the pop door open and let them come and go as they please. I've never had a pred in my coops and for much the same way as T. Pierce. My free dog that works day and night for just the price of one scoop of cheap dog food a day and has done so for the past 6 yrs with 100% effectiveness on predators. He's got a few good kills to his credit and has, more importantly, deterred many, many more from hawks, fox, coyote and bear. He may look a little relaxed in this pic but it's all a trick...he's ready to spring to action at any moment. Just wait...wait for it....he's ready.....shhhh..... 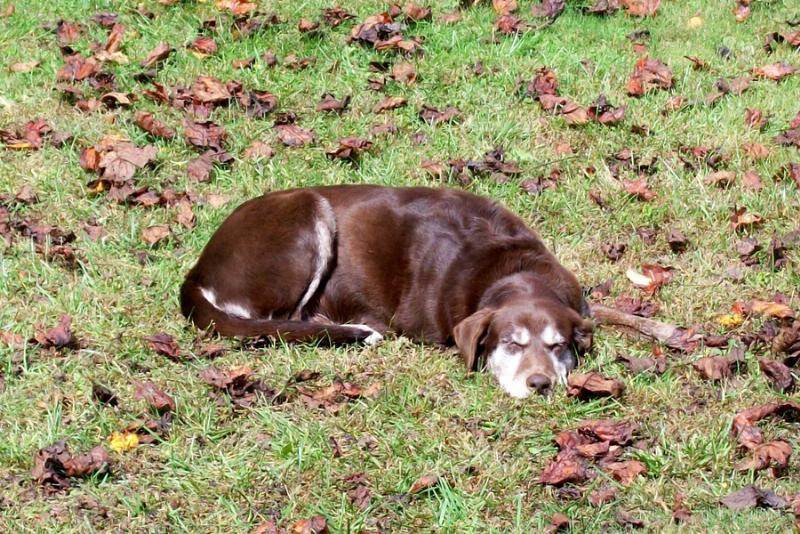