posted 2 years ago
I love typing on a typewriter for so many reasons.  For one, it's infinitely more legible than my handwriting.  It also slows me down and makes me think about how I'm going to end the sentence before I start writing it.  There is also the joy of finding a bargain at a Yard Sale, spending four days repairing it into tip-top shape. 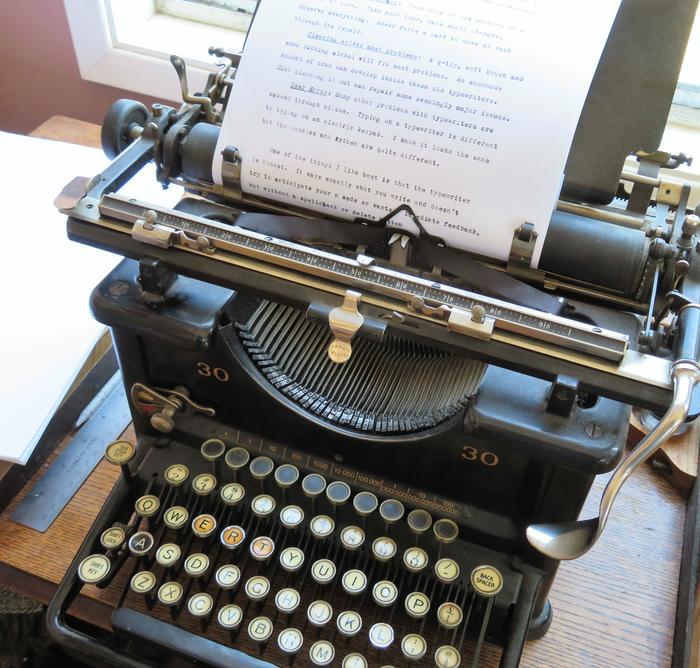 This big fella is a standard typewriter, something one would have had in an office.  It's had a lot of wear and several keys have been replaced over the years.  It's from the late 1920's early 30's and it's amazing it still works.  It's been well cared for before going into storage. 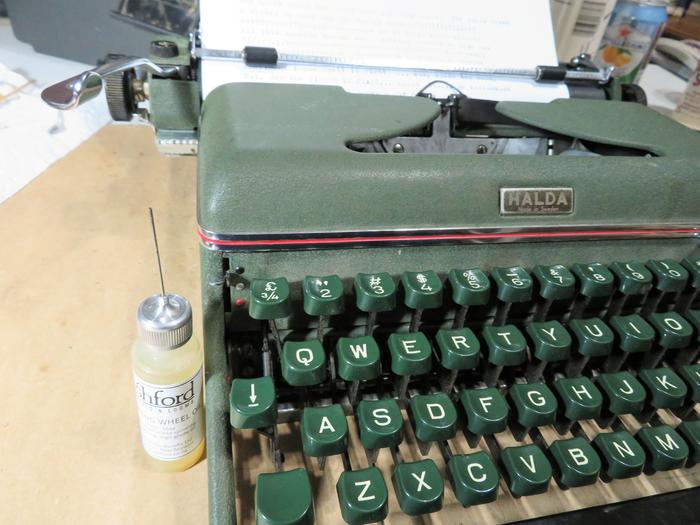 This one is a portable typewriter.  It fits in a case and is 'lightweight'.  Lightweight being a relative term in that it won't collapse a normal table while typing your memoirs.

Here, I typed out for you a short summary of everything I know about repairing typewriters. 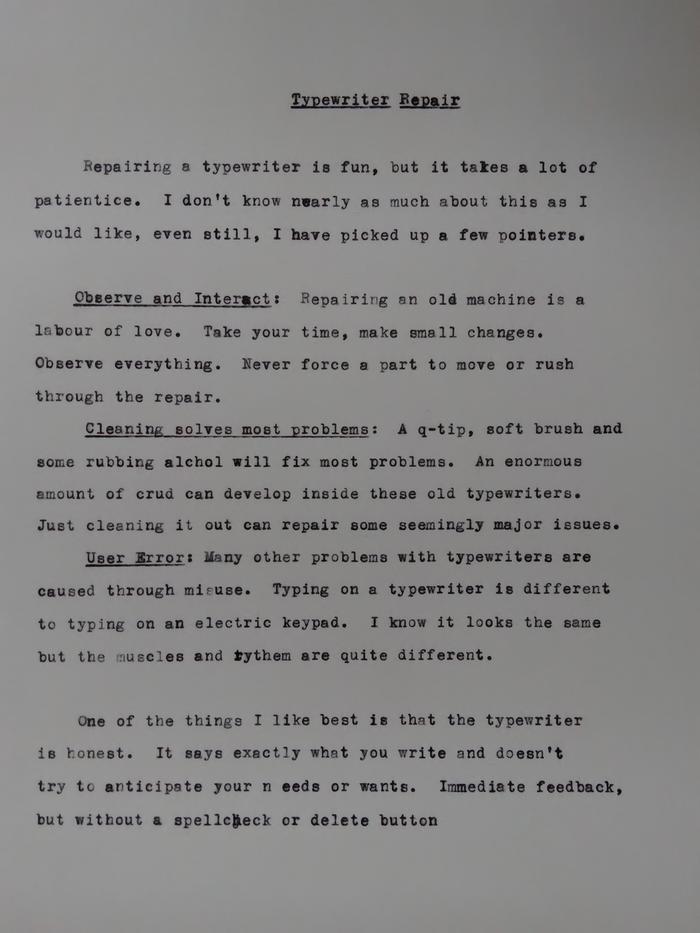 Well... possibly not everything.  You can see from my typing that there is a shadow in many of the letters.  This is because I need to improve my technique.  I'm pressing too hard on the keys and keeping my fingers on them too long.  Practice, practice, practice.  This is good because I have a lot of writing to do and need an excuse not to be distracted by the internet.

It's all well and good typing things onto a page.  I could share them with one - or with a bit of carbon paper, two - people.  What if I want to share with more?

The solution to that is technical.  A quick search on the google ap store showed me several programs that convert type into text by taking a photo of them.  This is my first attempt.

Repairing e typewriter is fun, but it takes a lot of patientice. I don't know nearly as much about this as I would like, even still, I have picked up a few pointers.

Observe and Interact: Repairing an old machine is a labour of love. Take your time, make small changes. Observe everything. Never force a part to move or rush through the repair. Cleaning solves most problems: A q-tip, soft brush and some rubbing alchol will fix most problems. An enormous amount of crud can develop inside these old typewriters. Just cleaning it out can repair some seemingly major issues.

User Error: Isny other problems with typewriters are caused through misuse. Typing on a typewriter is different to typing on an electric keypad. I know it looks the same but the muscles and rythem are quite different.

One of the things I like best is that the typewriter is honest. It says exactly what you write and doesn't try to anticipate your needs or wants. Immediate feedback, but without spellcheck or delete button.

but without a spellcheck or delete button

With the amount of dyslexia I have, it's amazing I was able to write that much with very few errors.  Handwritten scribbles usually have a lot of numbers and punctuation instead of letters.  I might get one word in 10 right.  But for some reasons the typewriter is a good match for the part of the brain that is learning how to spell.  Nifty.

That should be enough to get us chatting about typewriters.  Anyone else around here tickle their keys?

posted 2 years ago
The typewriter revolution is a great book.  It has all sorts of ideas on how to use a typewriter and tips and tricks on repair. 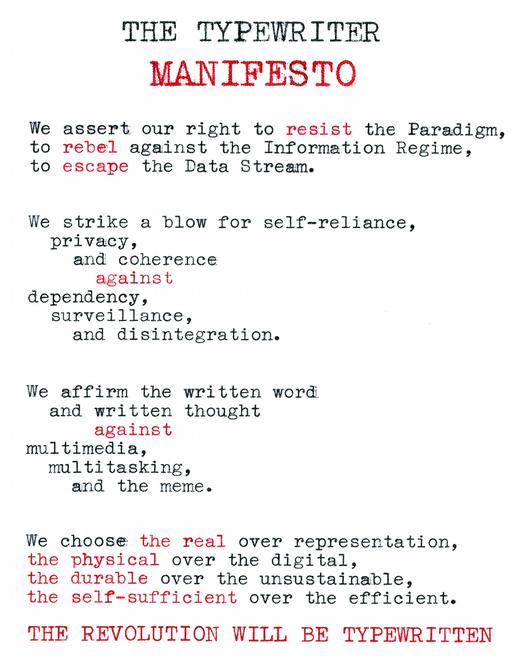 posted 2 years ago
This is another idea I really like.  It'

The USB typewriter kit allows one to transform a typewriter into an input device for a computer or tablet via a USB cable.  You install sensors to the bottom of the machine and it creates an electric signal.  If you don't want to use a screen you can store the keystrokes on a mini-SD card.  Nifty.

posted 2 years ago
Some wartime video on typewriter maintenance and use.

posted 2 years ago
Thanks for sharing.

I loved typewriters ... I had two manual ones similar to yours and a portable electric.

Using a computer keyboard is just not the same.

Are you able to find supplies like ribbons or carbon paper to make duplicates?

Rez Zircon
Posts: 268
Location: Brendansport, Sagitta IV
32
posted 2 years ago
Neat. I haven't had a real typewriter in some time (wore out the portable to where it was past repair, had several electrics die outright, and had two electronic models lose their minds and start typing gibberish) but the durn things are still an eye magnet. For people who "just use the computer as a typewriter" that USB gadget cuts the middleman.

Yes you can still buy ribbons and carbon paper, tho neither is cheap. Ribbons are about $9 each on Amazon and carbon or stencil paper is about $14/100 sheets.

You can extend the life of a ribbon by lightly dosing the top of the reeled cloth with fine machine oil -- as the oil migrates it carries ink from the unused edges across the whole ribbon. The results are less than perfect, but if you're not real fussy this will double or triple its usable lifespan. I've heard of re-inkers for typewriters too, but haven't seen one.

Ghislaine de Lessines
pollinator
Posts: 261
Location: Vermont, annual average precipitation is 39.87 Inches
43
posted 2 years ago
If you use a coupon at Michael's you can buy ribbons in all kids of interesting color options for $5-$6 .  I have picked up a black and teal one for my typewriter but haven't installed it yet.  It fits most older typewriters, not just the We Are Memory Keepers sold at Michael's.

posted 2 years ago
One thing about ribbons is that the spools that come with the machine may be specific to that machine.  Don't toss your spools.

I've noticed that the typewriter ribbons come on spools that don't fit my machine, but the ribbon is the right size, so I've been winding new ribbon onto the old spools.

r ranson wrote:One thing about ribbons is that the spools that come with the machine may be specific to that machine.  Don't toss your spools.

I've noticed that the typewriter ribbons come on spools that don't fit my machine, but the ribbon is the right size, so I've been winding new ribbon onto the old spools.

Been there, done that...

A too-wide ribbon won't work (it'll bind up, and trimming it narrower just makes it fold over) but you can adjust a too-narrow ribbon with cardboard shims cut to fit the spool. While most are nominally half an inch wide, there's some variation.

In a serious pinch, you could make your own from fine-textured ribbon fabric and some sort of oil-based ink.

Expect a very old ribbon to be dried out, but as noted... fine machine oil can somewhat rejuvenate 'em. Use a light hand -- a few drops, evenly spread, is plenty!

posted 2 years ago
These are some pictures of my Halda ribbon spool.  I only have one of these.  For the machine to work properly, I need two, otherwise, the ribbon won't automatically reverse.

The people over on typewriter talk have been absolutely brilliant at helping me get this machine working again.
halda-typewriter-spool.jpg 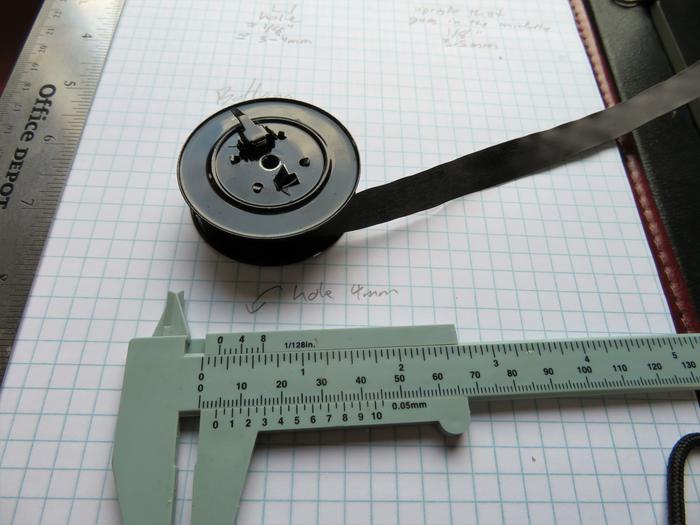 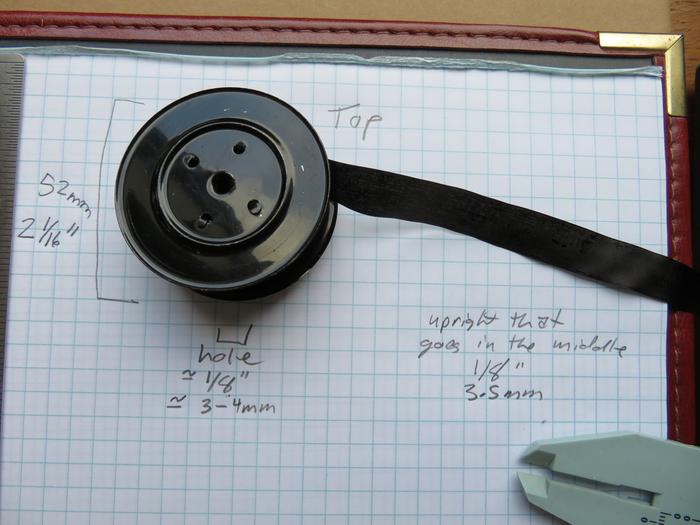 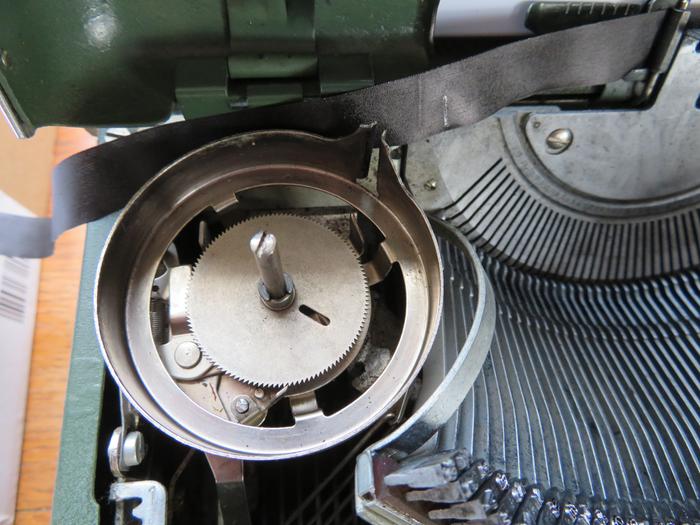 
Ha! Where was this idea when I was using machine oil to rejuvenate 'em? This sounds much better! :)

Rich Jones
Posts: 1
Location: UK
posted 2 years ago
When type writers lead the way you had to be able type to use them efficiently. With a PC and keyboard etc you can make all the mistakes you like first time around and still come end up with correct document in a fair time
Bob Case
Posts: 1
posted 1 year ago

r ranson wrote:The typewriter revolution is a great book.  It has all sorts of ideas on how to use a typewriter and tips and tricks on repair.

Any Ideas of what I have here?  Underwood 660 I can't find another one on Google? Does it really exist?
Underwood-660.jpg 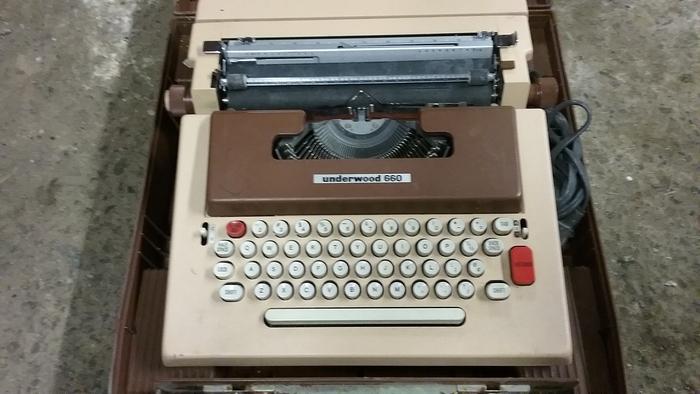 posted 1 year ago
I acquired a manual typewriter this summer - a big heavy thing, I think it's from the 1970s or 80s. It was free!

It was quite grotty, but I cleaned it. There was a spider living in it, who surprised me one day, but she was friendly. The typewriter is missing a few keys and I have yet to figure out how to set the right margin, but it came with a functional ribbon, so I have used it a bit - typing up a couple of letters and the first draft of a folk-tale retelling. It is noisy as all heck, and I used it too much at first, without taking breaks, giving myself a case of ouchy finger-wrists that lasted about a week!

I hope to use it to type out another first draft (of a shorter story! taking more breaks!) soon!

If I could get one for cheap I would likely try to get a smaller machine. Thinking the smaller ones make a little less noise? I swear neighbours four doors down can hear me when I'm typing on this monster!

posted 11 months ago
Daughter intends to give her teenager a manual typewriter for Christmas.  This thread appears to have much useful information, and I'm sending it her way.

I recall when the very first commercial word processors came out.  Our agency had two in the state headquarters in a room all their own.  And we all marveled at their capacity to move chunks of text anywhere you wanted on the page.

posted 10 months ago
I gave up my typewriter at Christmas. I wasn't using it as much as I felt it should be and the person I gave it to has more experience with typewriters.   I still think I might like a smaller/lighter typewriter at some point, but handwriting works just as well for me when I don't want to use the computer at this moment in my life!
Paul Sofranko
Posts: 58
Location: western NY (Erie County), USA; zone 5b/6a. Can't exactly tell where the boundary line is.
32
I like...

posted 5 months ago
There is an email messaging group dedicated to all things typewritery: it is found here: TYPEWRITERS@groups.io. It is the successor to a group of the same purpose on Yahoo Groups (which deprecated Groups last year.)

Old typewriters, new ones, how to repair, identify, get parts for.... the whole thing!

All that is gold does not glitter,
Not all those who wander are lost;
-J. R. R. Tolkien