posted 11 years ago
If one had a micro hydro situation where a large pond could be built at the water source, I wonder if one could get away with fewer batteries because you could just increase/decrease your flow on an as needed basis.

Dave Boehnlein
Posts: 298
Location: Orcas Island, WA
4
posted 11 years ago
I'm not sure how feasible this would be if you were using a pond as your energy storage, but I've heard about an interesting system for folks on perennial streams.

Doug Bullock occasionally mentions someone who lived along a stream and had a pipe of water routed through the house. You could apparently open a cabinet and pull a lever to move a pelton wheel into the flow. When you were done using electricity you just flipped the lever back and the pelton wheel would stop spinning.

If you had a large enough pond and knew how much water you needed to run to meet your energy needs you could probably use a system like Paul is mentioning by controlling the water release instead of the pelton wheel. Some considerations would be: energy consumption, pond recharge strategy (saddle dams would work well), backups, feasible pond size, etc.

Wikipedia has a nice summary of pelton wheel technology. http://en.wikipedia.org/wiki/Pelton_wheel

posted 10 years ago
That's not a bad idea.

But!  It would be nice to have something that could somehow automatically adjust to the shifts in demand.  So the pond becomes a big battery.

Joel Hollingsworth
pollinator
Posts: 2103
Location: Oakland, CA
7
posted 10 years ago
A small but significant part of the power grid here in California is a system that pumps water from our canal system into high dams in winter, when electricity is cheap, and uses that stored energy to help power all our air conditioners over the summer. This scheme also allows for some irrigation water to be stored outside its own watershed, which might otherwise be un-economical.

I think what you're describing would work best with a turbine where the load from the dynamo can significantly slow (ideally, stop) the flow of water.  In that case, an electronic power controller could be designed to extract power at an appropriate rate and minimal flow, i.e. to show the dynamo very high impedance when less power is needed.

posted 10 years ago
So!  It sounds like a potential solution exists!

What might it take to move the idea into reality?

Joel Hollingsworth
pollinator
Posts: 2103
Location: Oakland, CA
7
posted 10 years ago
If you have a chance to work with a good, young mechanical engineer, I would recommend that.  Preferrably team that person with an old machinist/tinkerer.

Look through all the classes of turbine on Wikipedia and/or in books, and see which ones would work to limit flow as they meet stiffer resistance.  Bonus points if running power into the dynamo can turn the turbine into the pump...that way the system can store energy from other sources.  Cull these designs according to how well they scale down, how efficient they are over the range of operation you imagine (I'm guessing low head unless you have dams very high up, obviously a wide range of flow rates, ..?), how defect-tolerant they are, and how available/easy to make the equipment is.

Then try a few as cheaply and quickly as you can manage, learn what you can from those early tries, and iterate as many times as you can.

On these criteria, and from the Wikipedia article on them, I think a Pelton wheel is wrong for the system you'd want to build on two or three counts.  But I honestly don't know what all else is out there.  I would even consider a peristaltic pump on a garden hose, coupled to a windshield wiper motor, at this early stage.

When they built the pond they destroyed a ho lot a top soil and many old trees. I have no idea how many microcosms and critter niches they destroyed.

Your idea of trapping an uphill source of water to use as power on demand is far better than the thread where someone wants to pump water uphill to create an energy bank.

BUT sometimes the grandest of ideas can be rethought by a simpler far cheaper idea. If you want the pond for other reasons you might better justify the costs, but then you might not want to spill out the water if you have the pond use as a food/water source.

Doug Bullock occasionally mentions someone who lived along a stream and had a pipe of water routed through the house. You could apparently open a cabinet and pull a lever to move a pelton wheel into the flow. When you were done using electricity you just flipped the lever back and the pelton wheel would stop spinning.

If one has such a stream nearby it can be used not just for power but reduce energy needs in the first place.  Cool water can be used to chill a "cold box" that would reduce your refrigeration needs.  The water can be diverted to cool the house during the summer.

A cold mountain creek makes you richer than Donald Trump.

Seth Pogue
Posts: 81
posted 9 years ago
You need a lot of head and flow to create appreciable wattagwe.  The < 1% slope trickle out of a pond ain't going to cut it.
Seth Pogue
Posts: 81
posted 9 years ago
If you have a utility intertie and are able at times to run your meter backwards, or  are totally off-grid and know for a fact that you often have surplus energythat your batwerysystem can't store, then if youcan find a high point onyour property where you can achieve 10-15 feet of head in under about 300 feet of run, and youcan afford $1700 for a pelton wheel and $3000 for 300 ft. of 10" dia. yelomine pipe, and have a friend with a backhoe and some bentonite to seal the pond, then it gets feasible to dig a pond for use as a battery.
John Bilhardt
Posts: 1
Location: South East
posted 3 years ago

paul wheaton wrote:If one had a micro hydro situation where a large pond could be built at the water source, I wonder if one could get away with fewer batteries because you could just increase/decrease your flow on an as needed basis.

Paul, I am very new to all of this.  I stumbled across this old post and was curious what solution you went with.  Thanks.
Travis Johnson
pollinator
Posts: 4958
1125
I like...

posted 3 years ago
I see no reason why this would not work. It works on a massive scale with nuclear power plant/hydro power combinations, why not on a homestead scale?

Hydropower is idyllic for power because unlike boilers, nuclear power plants, windmills or solar; they can be controlled at whim. If you need power, open the dam gate and you start generating power. If you need to stop it, just close the gate. If a stream or river has sufficient flow and consistency, then a dam is not needed; simply tap into the source of flowing water and power the turbine. However, since we all know energy can neither be created nor destroyed, and falling water is energy, a dam is simply a "battery" for hydro dams.

The great thing about hydro dams is, a huge amount of electricity can be generated in 24 hours. Overgeneration of power is such a concern that most microhydro plants are attached to electrical heating devices as loads. Lets say for instance you have microhydro and you have a dorm refrigerator in that cabin. You need to have a generator of sufficient size to live as you wish, but as that refrigerator cycles on and off, the load on that hydro generator will diminish and you will have an overpower situation. That power has to go somewhere, so most microhydro plants have electrical dumps to draw off that excess power, typically electrical heaters. To me using electricity to create heat that is dissipated to atmosphere is a waste. Why not power a pump that pushes the water back up the hill to the reservoir to resupply it at these overgeneration times? In essence you are recharging the hydro dams battery!

As for building a pond upon a farm, there are many reasons to do so besides this usage. Nor need they be expensive to build. I know of one guy here on this site that built a pond with a shovel and wheelbarrow and I wish I knew his name to give him credit for that! I don't have that fortitude, but will say I have never lined any of the many ponds I have dug, and heavy equipment can be rented giving homesteaders a low cost alternative to contracting it out.

posted 3 years ago
I speed up and slow down my micro hydro based on power usage and water flow. If the sun is shining and the solar panels are cranking then I can slow it down .. in the summer you can shut it off . Easy , turn a valve.However in the winter up north that is not  an option.  Fast running water will not freeze , very slow or stopped water will freeze quicker than you can imagine! Therefore you must have a big enough power dump for the excess power . A string of lights , a large fan , an electric heat element, yes even a water pump could be used. what ever your dump is it must be larger than your max generating capacity, and run continually . With a pond and totally buried pipes and your pelton in a heated room (like at a dam) you could stop a wintertime hydro... But who has a heated room for your pelton ? I work on dams on the columbia river they open and close turbines as power is needed and open waste gates when there is too much water. At nuclear  plants  they use cooling towers and ponds to store and cool water before turning back to steam. In fact any big business using steam for power has cooling towers and ponds. They use that excess power to pump the water wherever its needed. The difference is they make power on a scale that most micro hydros do not. they have the extra power to run anything ... most but not all micro hydros do not have anywhere near that kind of output... this is why they are called MICRO hydros that are making power in amps at D.C. not a hydro dam making massive kilowatts at A.C.
solar-hydro.JPG 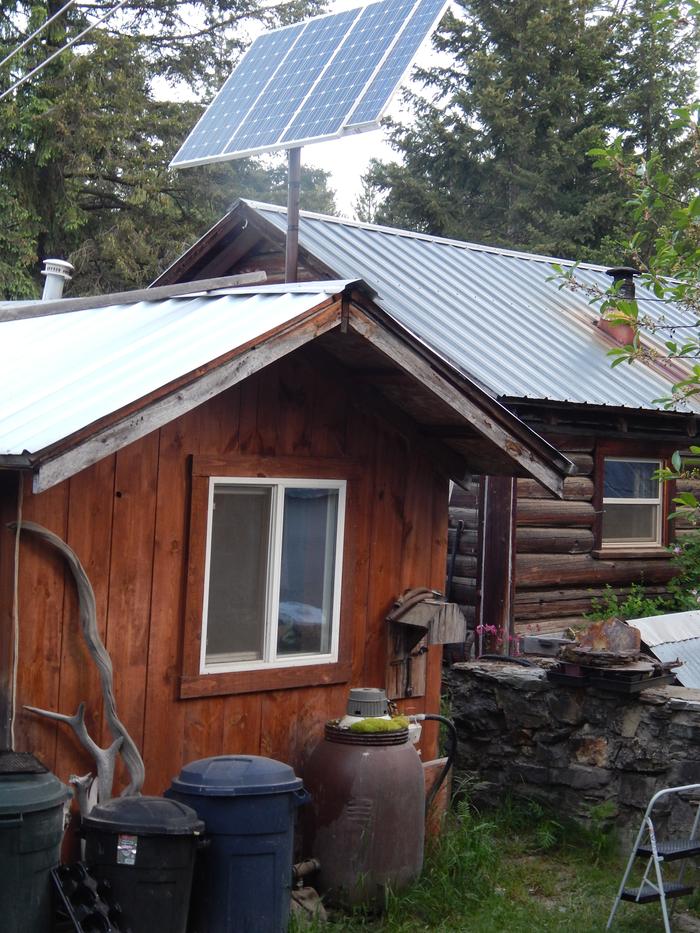 Troy Rhodes
Posts: 632
27
posted 3 years ago
Here is a free online calculator that helps to quickly answer questions about, how much power can I generate from xyz water source:


It is better to calculate than to speculate...