Pumpkins-what would you do with these?

Lindsey Jensen
Posts: 16
posted 3 years ago
Hey everyone! I have a bunch of buckets I started my pumpkins in & they are looking so happy & thriving! But I'm worried there is not enough room for them in the buckets for them to live & produce fruit, although they are putting on flowers now. If you were me, would you keep them in the buckets or transplant them in the ground? It's getting so hot here now so I really don't want them to die in the heat once I transplant them. Is it worth the risk? What would you do?
IMG_3577.JPG 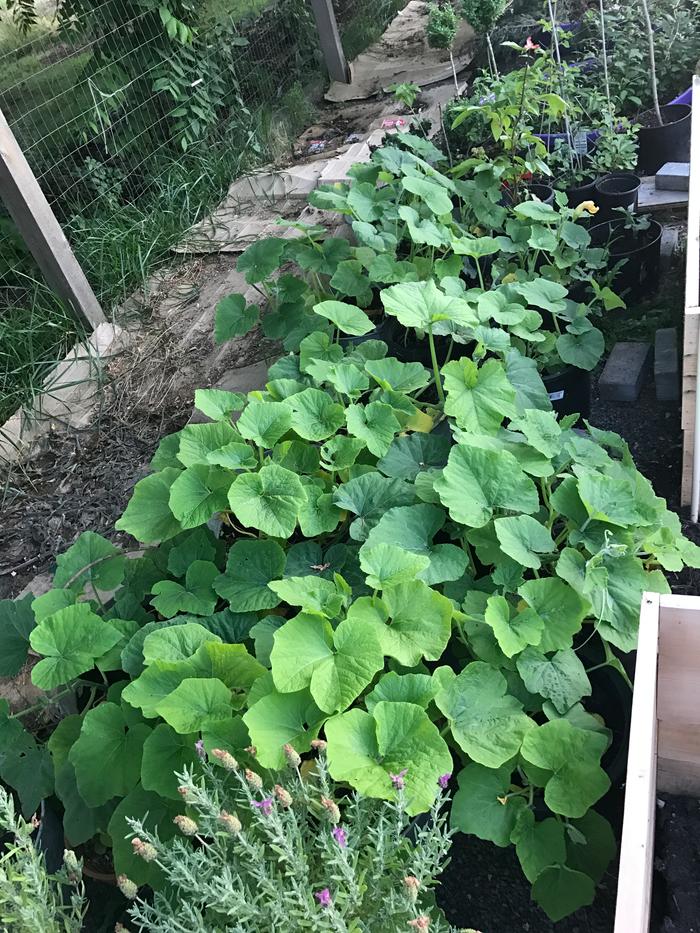 David Livingston
pollinator
Posts: 4328
Location: Anjou ,France
243
posted 3 years ago
I would leave them now but make sure they get the chance to form other roots by letting them trail over some bare earth maybe even burying some of the ends into the ground and dont let them dry out

Lindsey Jensen
Posts: 16
posted 3 years ago
Thanks so much for your response David! Do you mean that the vines of the pumpkins will root wherever they touch the ground?
Mike Haasl
master steward

posted 3 years ago
I've found that some squash form roots at the leaf nodes and some don't.  And I don't know which do which.  I would bury the pots a bit so they can root out the holes in the bottom of the pails.  If you're really ambitious, cut the bottoms off of the buckets and bury the bottom-less pots in the ground.  Then they won't have the transplant shock and they can get their roots down deep.

Lindsey Jensen
Posts: 16
posted 3 years ago
Thank you for your response Mike. How interesting--I never knew pumpkins could do that. Unfortunately the buckets are metal so I don't plan on cutting the bottoms out. Do you think my success will be short-lived with them bc there are as many as 4 pumpkins per bucket! 🤦🏻‍♀️😄 Meaning, do you think though they look great now, they may fizzle out or not produce anything? Thanks!
Deb Rebel
gardener

posted 3 years ago
I grew competition pumpkins and held a state record for awhile.

At each 'node' where there is a leaf, your pumpkin vine will want to make roots. I suggest you bury your pots/pails to ground level, get some old thrift store light colored plastic hangers and snap the last 3" off of each corner (some used crossed twigs but I fall a lot so not wanting to get hurt if I fall on these) and gently pin the vines to the ground by each node or every few nodes, until the nodes put down roots and anchor the vines. I've had to sever vines from the mother root (stump) part ways down after they rooted in, and they turned into their own plant and produced fruit, so.

At this point you don't want to disturb your stump roots, pumpkins never forgive this (they are very very picky. Later on you may need to shade your stump and protect it from getting wet so it doesn't get wet/stay wet and rot. An old tomato cage with a an old towel or piece of tarp works well, suspended above it.

The vine will produce both male and female flowers. Usually male first and close to stump, farther out females. You can tell because at the base the male will be skinny and the female will have a big round bulge. That will be the future pumpkin. You can pick off the males if you have no females, just as they open, batter them and fry them like fritters. Good. Females you can pick to control and space the number of sets you have on your plant.

If your days are hitting 90 or more F you may have difficulty getting fruit to set. If you have this problem, you can shade the female blossoms the day they open, onwards until the fruit starts to swell and you get to a certain size (depending on what type you are growing). I would save old resin lawn chairs that were cracked and put a concrete block on the seat to keep them in place. Just set over the fruit to shade from early to mid afternoon sun. Remove if your pumpkin starts getting too big to fit under the chair.

What kind or kinds of pumpkins are you growing?

Lindsey Jensen wrote:Do you think my success will be short-lived with them bc there are as many as 4 pumpkins per bucket!

I don't know if 4 pumpkins per bucket will work as they struggle to achieve maturity.  If it were me, I'd pick my favorite plant in each bucket and kill the others off by snipping them off at the surface of the soil (to not disturb the roots of the plant you're keeping).  But maybe other folks have better ideas?

Since you can't take the bottom off of the bucket, I'd definitely bury the pots fully like Dan suggests.  That will keep the roots cooler with the pot surrounded with soil.

Mike Jay wrote:I don't know if 4 pumpkins per bucket will work as they struggle to achieve maturity.  If it were me, I'd pick my favorite plant in each bucket and kill the others off by snipping them off at the surface of the soil (to not disturb the roots of the plant you're keeping).  But maybe other folks have better ideas?

Since you can't take the bottom off of the bucket, I'd definitely bury the pots fully like Dan suggests.  That will keep the roots cooler with the pot surrounded with soil.

I was hoping if OP puts the bucket in the ground and starts training vines and getting the nodes to root, she could THEN sever the plant at the soil INSIDE the bucket, after a few nodes root. Then sever at the first rooted node, separating the plant totally and allowing it to grow. So if there are four, train them all at 90 degrees to each other and after they root outside the pail, separate them so she gets more plants.

I assume these are something like Connecticut Field or a smaller pumpkin yet....
Mike Haasl
master steward

posted 3 years ago
Gotcha, that's worth a shot for sure

Lindsey Jensen
Posts: 16
posted 3 years ago
Wow, you guys are so inspiring!! Ok, I think I am going to try all the tips you mentioned! Thank you so much for all the general info about pumpkins too. I love growing pumpkins more than anything else and I have a lot of varieties...Musque de provence, jarrahdale, flat white boer, kentucky field, cinderella, black futsu, kikuza, valenciano, Kogigu, long island cheese...yeah...I like pumpkins LOL! Would love to see any pics you have of your award winning pumpkins Deb...or any pumpkin/growing/strategy pics...award winning or not hehe. Thanks again everyone for sharing your knowledge ♥
Deb Rebel
gardener

posted 3 years ago
Okay, most of the varieties you listed are smaller pumpkins (under 40-60 pounds, some are single digit weights. Figure at least as much space for each vine as watermelon (6x6' to 12x12'), the larger the fruit the more space it needs. You can also train your vines to cover the ground the way you want, I usually would do a Tbone with the main leader going straight, and the first two sides going straight out. With the pail situation you may have to trim a few of first few secondaries (tip them off where you need to ONCE you have some nodes rooted and severed the extras from the stump they started in the pail) The space, figure you plant the vine at the center of one side of the square, and train the main leader straight across the middle of the square, with the secondaries being trained out at 90 degrees to fill the space allotted.

Next year start them in breakaway pots lined with soy ink newspaper (no colored print) to make transplant easier. Go to a nursery and ask nicely if you can get some trade gallon pots from their bonepile. Most will give you, as they have to otherwise pay to haul them away. Cut down from the rim to the bottom twice to make the pot in two pieces (leave the bottom alone). Duct tape the cuts on the outside. Line with newspaper. Plant your seeds with the point down at 45 degrees and the edge of the seed BARELY showing. Start under light. It should take you 2-4 weeks to get your plant ready to go out, the smaller the variety the longer it will take to outgrow the pot.

For next time, when your pumpkin plants first come up and spread the cots (the two first roundish earlike leaves, look for which way the first true leaf is pointing. That is the way your leader vine will grow. When you plant your plant, aim that the direction you want it to grow as you put the plant in. Undo the duct tape, carefully lift the plant out, and set in the hole and firm in. The newspaper will protect the roots (pumpkins HATE their roots messed with) and disappear within a week. I have dug out more peat pots looking brand new after a year and they hindered the roots-a few will grow through but overall, bad news, in my experience. I have never dug a layer of newspaper out past a week in the ground.

If you only have two plants per pail then it will be easiest to make them run away from each other and fit the ground the easiest. They may put up a back leader if it is the one in the pail with the stump. Just tip it off right away and pick any blooms on it, off.

I just put in a huge brush hugel and planted in two pumpkin plants that grew from seeds I pulled out of my parrot's food. My Quaker loves them. Going to follow some of these awesome tips and definitely follow them next year. I already have a bunch of male flowers on them, but going to do the leader pinning as you said Deb so the two plants spread away from each other. We shall see how it goes!

The real world is bizarre enough for me...Blue Oyster Cult

posted 3 years ago
Pumpkin vines can be quite stiff. Some are, some aren't and usually what's closest to the growing tip is the most pliable. If you break the vine, it will quit growing that direction. Lose the end and anything between there and the stump will continue to grow, but. Best time to start training vine is after it 'lands' (they start growing UP then finally lean over and touch the ground and start "running") and while it's bendable.
Lindsey Jensen
Posts: 16
posted 3 years ago
You have been so helpful, thank you very much!