posted 3 years ago
Hi all,

I'm new here, thought I would get on a few forums to get your feedback on 2 cob/cork hives I recently built. They are the size of conventional beehives for easy addition of wooden frames and additional floors.
Here is a video showing the hives and how I built them:
Bees came in 1-2 months ago and seem to be doing fine.

posted 3 years ago
When I was in Portugal a few years ago I saw all the sheets of cork being harvested and thought they would make for wonderful insulating hive materials. I use poly-hives myself, rather than wood, because the extra insulation seems to make a big difference. When I was looking at the sheets - which seem to come with a natural curl - it occurred to me you could make something more like a cylindrical log hive very easily.

posted 3 years ago
Thanks for your reply ! Yes indeed cylindrical cork beehives are traditionally used in Portugal, as shown below. They are probably great for bees, but collecting honey was an issue because you basically have to destroy most of the hives, as they don´t have removable frames (unless you build tailor-made frames for each hive). That's why I went for a conventional-sized hive, but I'm planing to put a few of those cylinders around just as an additional habitat (not for collecting). Cork harvesting season is just starting.

By the way cork is really a cool material for plenty of applications, it just doesn't rot. I regularly find complete cylinders of cork on the forest floor, empty in the inside as if they had been harvested, except they were not - the cylinder is intact whereas when harvested you need a vertical cut to take it off the trunk. So the cork tree branch falls on the floor, and the wood inside slowly rots until there's nothing left but the cork around, which doesn't have any sign of rotting. 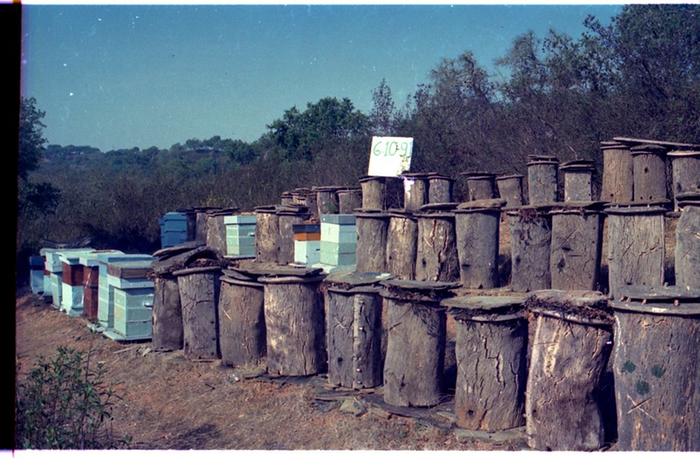