Posts: 1
posted 9 years ago
I live in southern BC (Kimberley)and plan to build a green house. We get great sun (more sunshine hours then most anywhere in BC). I want to grow all my produce in the green house including lettuce. I have a hillside with a southern exposure. My plan is to build a shed roof on it with the slope down to the north. My question is should I have a solid roof cover or something to let the light through?
Tom OHern
Posts: 236
Location: Seattle, WA
12
posted 9 years ago
You will want your glazing to be as close to 90º (perpendicular) to the sunlight as possible.  As this changes through out the year you will have to pick an average.  Often that is going to be about equal to your latitude but you can adjust if you are going to be using the greenhouse more during the fall, winter or spring. If your roof is more than ~30º to ~45º off from perpendicular to the angle of the sunlight you want to capture, most of the light that strikes that surface is going to be reflected away and the glazing will end causing more heat loss than heat gain.
Miles Flansburg
pollinator
Posts: 4665
Location: Zones 2-4 Wyoming and 4-5 Colorado
465
I like...

posted 9 years ago
pdixon,  I built my greenhouse into the side of a hill in my backyard in Wyoming. I collected rocks from the surounding countryside and stacked them in terraces. Built an A frame from a torn down house in town. Covered it with clear fiberglass panels. Had two window vents on the roof that I could open in the summer as well as a door and window on opposite ends. The rocks moderated the heat and the plants loved it in there. 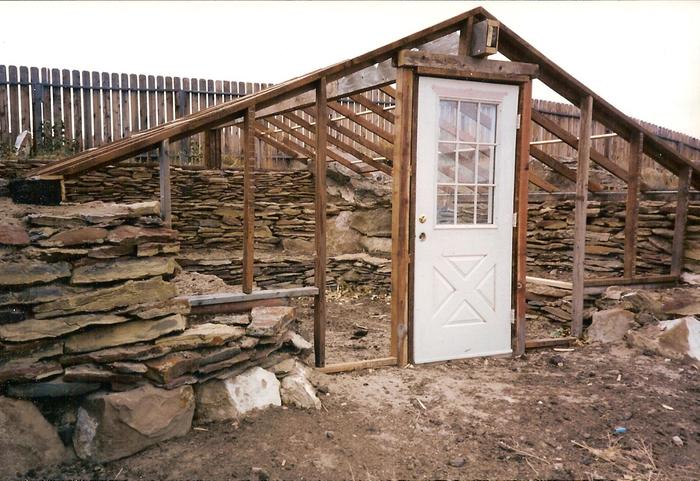 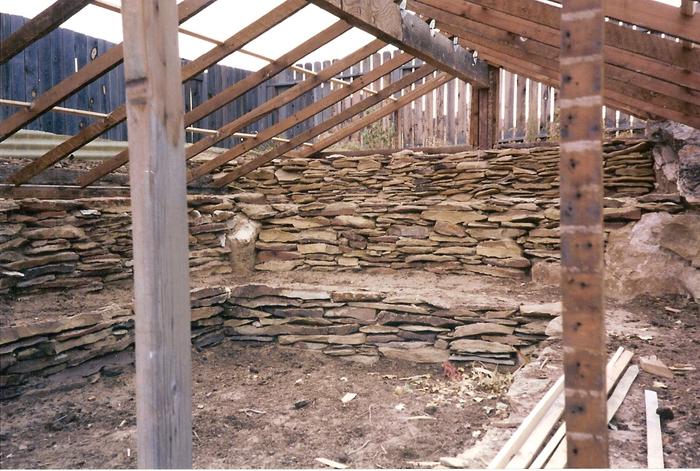 Posts: 70
posted 9 years ago
That is one of the coolest greenhouses I have ever seen! You must have plenty of field stone around there. 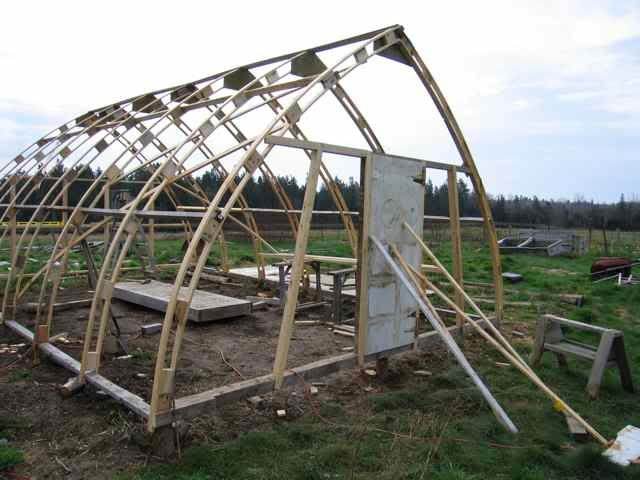 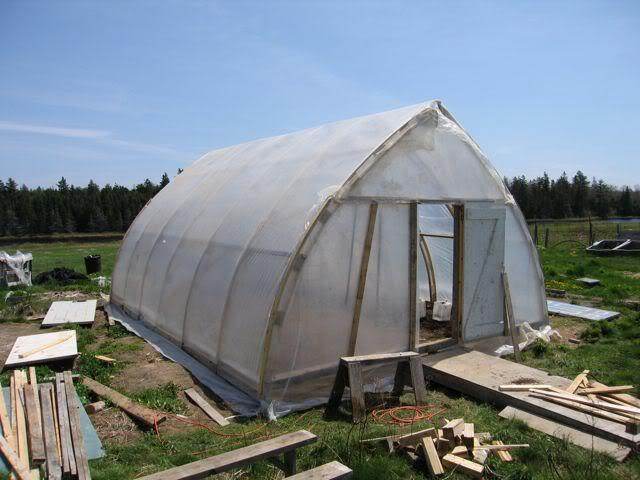 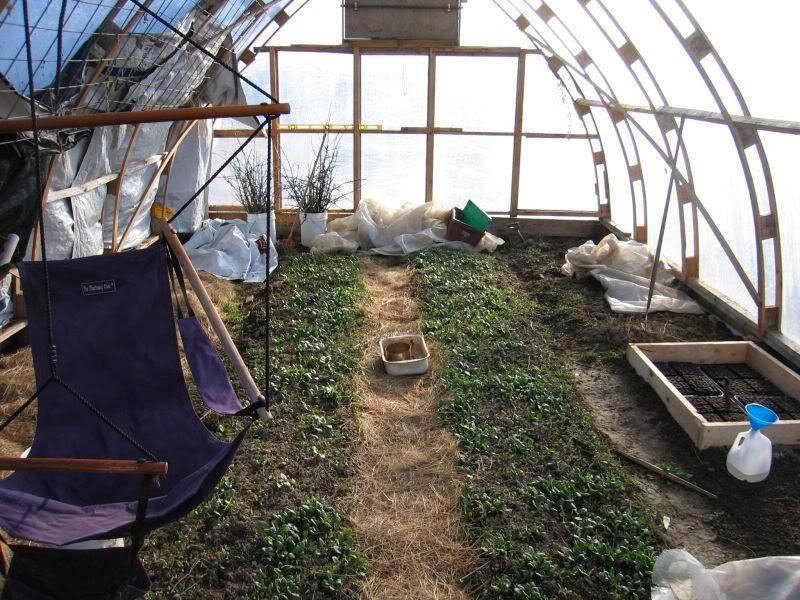 Posts: 70
posted 9 years ago
Reminds me of ship ribbing. What did you use for your bending members? Is it a plywood/laminate material or did you bend lumber? I like your design!

I've been trying to figure out what would work in terms of lumber for a greenhouse. I'm comfortable working with wood, but I didn't want to use 2x4's, it just seemed like overkill.

I imagine if someone took maybe 4 sheets of 1/2 or 5/8 plywood, and laminated them together (two sheets thick, with staggered joints, resulting in one 4'x16'x1 1/4" panel), you could probably cut curved greenhouse support members from that. I suppose you would need to seal them so they wouldn't respond to the high moisture environment of a greenhouse, but I think as long as they were cut 2'' thick they would have enough rigidity.

Just an idea. Probably not as cost effective as using that same plywood to build a bending jig to form galvanized electric conduit, unless it's lying around....
Posts: 61
1
posted 9 years ago
The arches are made from 6" blocks of 2x4 and wood strapping.  The strapping is about 5/8 x 2 1/2" true dimension.  Small tight knots are okay, but avoid larger ones.  The arches are bent to a 134" dia. circle, formed on a jig.  The blocks are 18" o.c.  I bend to the outside of the jig.  I use 3" galvanized deck screws rubbed through a wet bar of soap.  These screws cross in the middle of the 2x4 block, so if the block splits, the screws hold it.  I get these screws at a local surplus and salvage outfit.  I used 14' strapping and left the top two feet straight.  The foundation is cedar posts, cut level with each other, with a 2x4 run across the top.  The frames have 1 1/2" clear before the first block, so they sit down on these sills.

We've gotten a lot of snow this winter.  We got 16" in one storm, with some strong winds as well.  It slides right off.  Here on the Maine coast, this type of structure is fairly common.  People build them up to 20' tall to store their boats in in the winter.

I covered it with a used piece of greenhouse plastic.  That saved some money.  I used scrap and salvage wherever I could.  I really paid only for screws and strapping, and I built the 16x24' greenhouse for about $100.

Dan
Jordan Lowery
pollinator
Posts: 1528
Location: zone 7
18
posted 9 years ago
you want to aim for more light in the winter. the summer its not as big of a deal, and the greenhouse is best turned into a shade house for propagation in the summer or chances of overheating are high unless you like to waste money one cooling( or are a genius and invent some passive cooling system) so optimizing winter sun is your best bet.

look into passive solar greenhouses, reading what that has to offer alone will set you above 99% of everyone else who builds a greenhouse.

in very cold climates you can look at pauls video on a rocket mass heater in the greenhouse.

stewartrIL , ya in Wyoming there is alot of rock laying around. The flat sandstone was pretty easy to stack.

Posts: 1758
Location: Cascades of Oregon
153
posted 9 years ago
Wyomiles,
Pictures of that flat sandstone brings back a lot of Wyoming memories.
I like the ribs too.

Posts: 61
1
posted 9 years ago
My design is similar to this:

But there's no reason for that many stringers.  They're a waste of lumber and don't actually take any of the load, plus they block sunlight.  I used two 2x3 stringers on the north and one on the south, plus several courses of diagonal strapping on both sides (less on the south) for bracing.

I came across this greenhouse design a little while ago, and I found out about this forum while researching rocket stoves.

Chines solar greenhouses are made for rocket stoves. http://www.energybulletin.net/node/52317

There's a diagram at this site http://energyfarms.wordpress.com/2010/04/05/solar-greenhouses-chinese-style/

Bruce
Drew Carlson
Posts: 31
Location: Zone 5a Southern Wisconsin
posted 9 years ago
Has anyone ever had experience with this type of greenhouse heater and cooling system?

soil wrote:
you want to aim for more light in the winter. the summer its not as big of a deal, and the greenhouse is best turned into a shade house

Some of this is climate dependent. Here in northern Vermont we don't get summers warm enough to grow peppers, melons and other heat lovers very well. A greenhouse in our mild summers gives us a hot area where these plants do well.

In the winter we grow plants in the greenhouses that like or tolerate cooler temperatures such as greens, kale, broccoli, etc.

Tomatoes started in the summer do well through the fall, go dormant in our cool winter and then wake up again in the spring to produce an early bounty.

All of this is without heating the greenhouses. I resist the urge to heat the greenhouses with wood or petros. I have heated with compost and our livestock produce enormous amounts of heat that I would love to capture. I've various schemes for utilizing their bio-heat and their CO2.

posted 9 years ago
K9 I only have two more pictures.  You see the problem is I moved and left it behind. I just wanted to give folks an example of what can be done with stacked rocks and berm. 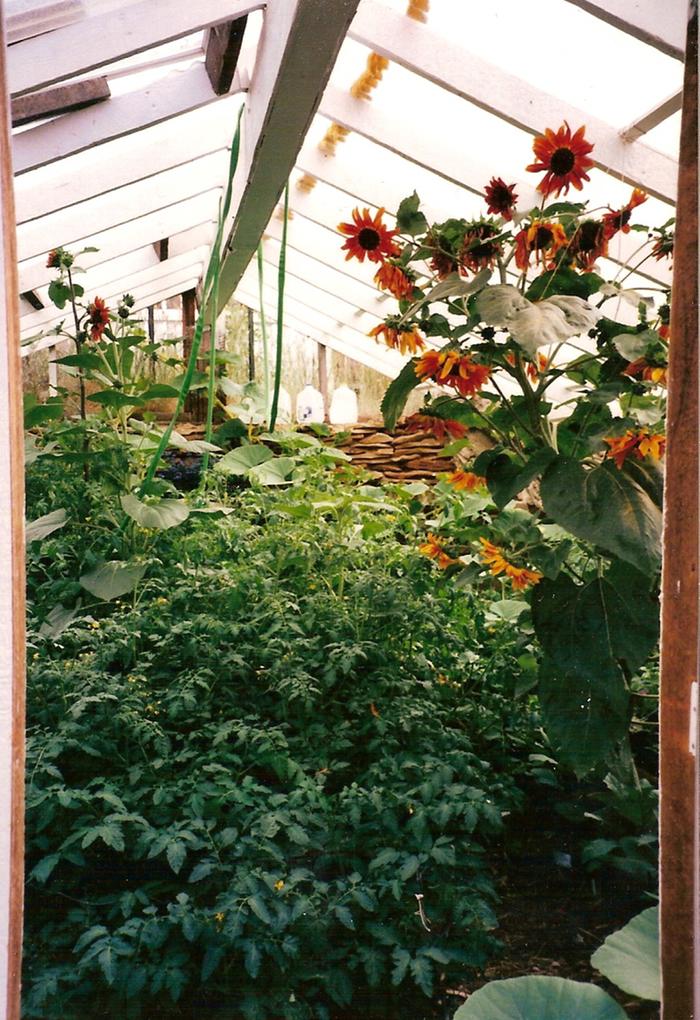 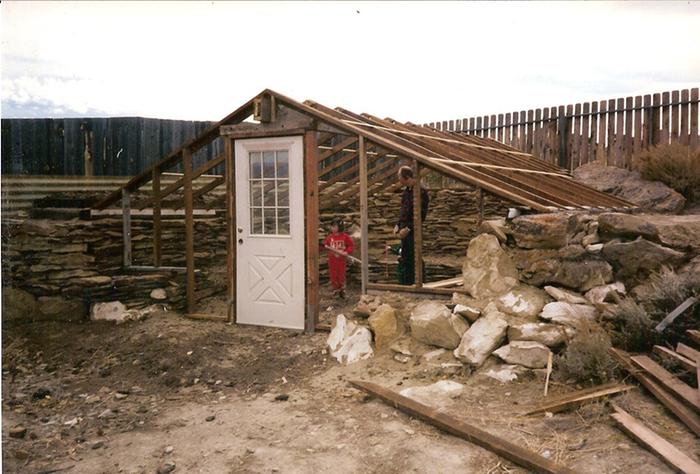 Remi Gall
Posts: 45
Location: Romania
posted 9 years ago
thanks Wyomiles , i wish i had access to rocks like those cause that is one awesome looking greenhouse