Vickie Hinkley
Posts: 53
Location: Toledo, WA
1
posted 12 years ago
Video links to my SW Washington heritage breed Tamworth pigs. In your video the orange pig is possibly a Tamworth - a pasture pig -﻿ possibly from my offspring. In 2005 and 2006﻿ we created the first successful breeding lines in OR, WA, ID and have since created a number of Tamworth breeders here. Plenty more pig videos - if you're crazy 'bout pigs!

Great videos, thank you for sharing.

I'm north of you on the Sound.  We raised our first pig and just had it butchered, dressed at 400+ lbs.  He was a duroc cross.  I would have loved to have a heritage breed, but he was a stray piglet, so we made due with him.

Maybe next year we will be ready for another piglet.  Can you tell me all about the Tamworth pigs?

I'll just link the 1st - starting at the farm - you can follow to the others if you like.

Plus one of my butcher pigs in the photo - 135 pounds/half hanging w/o head and leaf lard.
half-pork.jpg 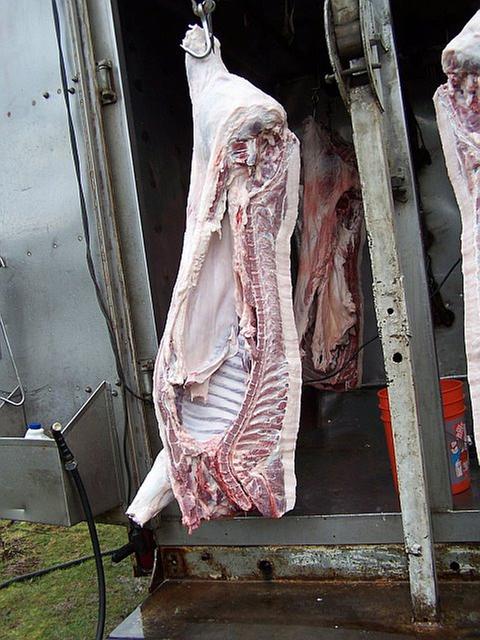 Thanks for the youtube videos.
Vickie Hinkley
Posts: 53
Location: Toledo, WA
1
posted 12 years ago
Tamworth Pastured pigs.  Strip grazing - not much but enough to give them forage and something to keep them busy.  Obviously this breed roots!

{{{Don't worry about my breathing - it's my aerobic exercise - smile}}}

Posts: 45
posted 11 years ago
What were your deciding factors for this breed as apposed to Old Spots or some other breed?
tel jetson
steward

Posts: 3694
Location: woodland, washington
183
posted 11 years ago
I have to say that they're not quite so cute when they're cleft in twain.  though I suppose it's difficult to snack on them while they can still snort at you.

the Tamworths I've encountered (at a friend's farm) smell strongly of maple syrup and walnuts.  they're supposed to be great mothers.  one of my friend's sows squashed one piglet per litter the last two years, though I suppose that could still fall within the realm of good pig motherhood.  I can attest to their violent defense of their young.  at least, I assume I would have been done violence if I had been just a little bit slower in getting the hell out of the pen.

friend bred the two Tamworths last with a hog from another heritage breed, Large Black.  not the most poetic breed name around, but it's an accurate description.  the piglets are evenly split between Tamworth and Large Black coloration.

Vickie Hinkley
Posts: 53
Location: Toledo, WA
1
posted 11 years ago
My late husband was researching heritage breeds, wanting a sustainable and thrifty breed. When he found the Tamworth online - the Irish Grazer spoke to pasture pig, which we wanted. Bacon Pig vs Lard Pig was key - so we were not be interested in the Old Spot, or any lard pig for that reason. Medium sized, good mothering, and good temperament were all key. However one extra factor - was actually a mistake: there was some private farm blogs/websites that said the Tamworth was NOT a rooter.  As our place is small - that was also a plus - but that is not the case - oh well.

That being said, I've had the experience of almost no rooting in ONE paddock, the one with a mature crop of chicory. That paddock lasted two full years, with two boars growing up there. PS: No toxicity issues in those two years, nor during their lives thereafter.

Personally, I like the great orange color, preferably with golden tones, but the orange-burgundy coloring is OK. I also greatly prefer the upright ears, bright golden brown eyes, long clean lines and no squished-up noses. Their energy, enthusiasm, and smarts. You've heard never put a hot wire across a gate that you ever plan to take them through?  95% of my experience with the Tams - young and old - experienced and not - they are smart enough to figure it out within 5 minutes - if that.  Also will strip graze - walking forward daily where the hot wire used to be.

As for violence or aggressiveness - when babies are screaming - absolutely they will threatened you. Also, strangers approaching is an alert, they let you know they are aware, then as they see everything is OK, the tone quiets. Also, more or less, I believe, based on how hormonal at that exact moment. I've noticed more with some mothers than others, if they are cycling or very postpartum, ramps up the crankiness.  Which seems logical and appropriate. Good, strong, survival instincts is something that we look for, or at least expect and understand in the heritage breeds.