John Weiland
pollinator
Posts: 2077
Location: RRV of da Nort
477
posted 5 years ago
I didn't realize that Robert Stirling's name actually lived on through a current company as well as for his invention of the Stirling external combustion engine.  Seems like the general technology is still being used to make efficiency gains in heating and cooling:

Anyone know of using this concept for making more efficient heating or cooling home-based appliances?

Devin Lavign
pollinator
Posts: 1063
Location: Pac Northwest, east of the Cascades
315
I like...

posted 5 years ago
The only practical appliance I have seen using Stirling tech is the wood stove fans. And they tend to run a bit expensive and be backordered a lot.
https://www.stirlingengine.com/product/stirling-engine-stove-fan/

BTW a youtuber Lindybeige recently put out a video discussing Stirling engines, and questioning why they weren't being used by people more these days.

posted 5 years ago
Yes, there is a company building Stirling Engines to power generators on a microscale, but while that seems applause worthy, check your excitement for a moment at the bottom of the ocean. These Stirling gen sets put out a whopping 800 watts and cost a staggering $22,000. Used aboard yachts where noise of typical gensets are irritating, and for people who can afford high end yachts, they have their place. They do charge the battery banks of sailing yachts quietly and efficiently, but at a staggering price that makes their use in homesteading situations cost prohibitive.

Other than that, there are no commercially made Stirling Engines available for sale other than industrial models. There are many reasons for this, but it all boils down to economics. Even the Stirling Engine touted up on Youtube as burning corn husks in India and producing power had massive issues.

Now do not get me wrong, I love Stirling engines and the concept. I dream of one day using compost heat and geothermal cooling to run a jenny that helps power my farm, but at the moment none are available commercially. I saw a few promising designs on youtube, sketched out some ideas, and someday may make them, but FOR ME and my situation anyway (which is far different than others), I am using my ambition in other endeavors such as heating water directly via wind power. I am not saying that is the direction everyone should go, but after researching Stirling Engines for a long time, sadly I felt it was a dead end rabbit path. I would love to be proved wrong though.

John Weiland
pollinator
Posts: 2077
Location: RRV of da Nort
477
posted 5 years ago
Actually, having had a few model Stirling's on the shelf, unless there is a way to power them more efficiently, I agree that *as a source of power* they are of limited use.  However, I became intrigued by the thermodynamics of the Stirling cycle as a way to create heat and, in reverse, cooling.  This dovetails a bit with the idea of by-passing electrical circuitry and just going straight to heating and/or cooling from a rotating wind/water-wheel turbine.  As for the technology per se, perhaps it's a done deal.....maybe this is already the way heat pumps work for heating and cooling, but the advertisement in the links above were suggesting that some application of the Stirling cycle was enabling more efficient cooling than standard refrigeration compressors were providing.  And that was leading me to consider if this application of the technology had made it's way (other than in standard heat pumps) into any up-and-coming HVAC implementations.  Would be curious if others more immersed in the field had come across this.

posted 5 years ago
I was en-thrilled to see a youtube video on this (video below). From what i've learned photo-voltaic/solar cells will cap at about 20% of their potential solar energy and the other 80% is in the form of heat. Stirling engines are about 40% to 57% efficient which means that they can harness from 36% to 45% of that potential solar energy. Which is far superior to solar cells.


Along with this I can see making a solar thermal powered water pumps (various designs).

Free means at no costs or restrictions, Freedom means choosing your own costs and restrictions!

Todd Parr
pollinator
Posts: 1793
Location: Wisconsin, zone 4
97
posted 5 years ago
One of the experiments I want to try but haven't gotten to yet is building a Stirling engine and using a Fresnel lens from a TV to power it.  I have one sitting around for experiments like "solar death ray" for cooking via the sun, but I haven't gotten to the Stirling engine yet.  The extremely high temps from the lens should be able to power a Stirling engine of some size pretty easily.  If anyone has tried it (and I can't believe someone hasn't) I would like to read about it.

posted 5 years ago
The above video states an efficiency of 17 percent not 46. That would be in line with the best pressurised stirlings I've read about and in line with solar cells.  More maintenance and moving parts so probably why there does not seem to be much interest. They were popular in their day as a safe alternative to steam but the more common  non pressurized ones have an efficiency in the single digits.  Some high end cryogenic coolers use them as well.  If you need the waste heat for something great if not there are more efficient solutions.
Best regards, David Baillie
Terry Frankeberger
Posts: 34
Location: West Tennessee
1
I like...

posted 5 years ago
This link has more about stirling engines such as the variations and efficiencies.

Free means at no costs or restrictions, Freedom means choosing your own costs and restrictions!

posted 5 years ago
I used to work at a joint test facility testing military communications systems at Fort Huachuca. When I first got there back in 1999 they had this really cool static display: 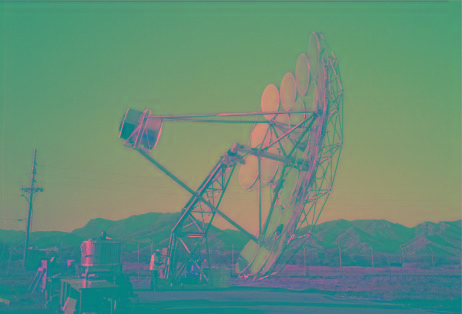 This was an experimental CSP run by the NREL.  It originally had a stirling engine in it, but they had so many problems with it that the replaced it with something else, might have been a stirling engine from another manufacturer, the guy that did the maintenance on it wasn't sure.  Anyway, that engine didn't work any better.

I call it a static display because the first two years I worked there is was broken and they had been waiting for parts to repair it since before I got there.  They finally got the parts in and repaired it, it ran for about three weeks and then broke again.  In the five years I worked there, I don't think it was up and running for more than 3 or 4 months total.

Sometime around 2005 they finally gave up on it and removed it, I imagine it was latter sold for scrap.

Stirling engines can work fairly reliably if they are CONSTANTLY running, however they don't respond well to operating intermittently, like running during the day and being off at night.  Part of the problem is that in order to work they require very tight tolerances.  Since they tend to be made out of a variety of dissimilar materials that expand and contract at different rates when hot vs cold, keeping tight tolerances under both conditions is challenging.
Another part of the problem is that to get really high efficiency they tend to use helium, or some other gas for a working fluid.  With the movement for tracking and the high temperature differentials they would frequently end up with leaks which would shut it down again.
There are probably other problems as well, those were the two main ones that stuck out in my mind.