One-Straw Revolutionary: The Philosophy and Work of Masanobu Fukuoka by Larry Korn

posted 5 years ago
One-Straw Revolutionary: The Philosophy and Work of Masanobu Fukuoka by Larry Korn 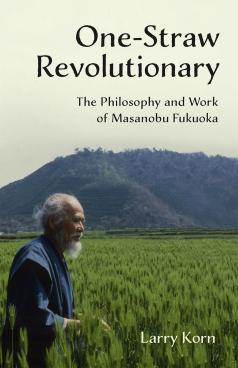 One-Straw Revolutionary represents the first commentary on the work of the late Japanese farmer and philosopher Masanobu Fukuoka (1913 – 2008), widely considered to be natural farming’s most influential practitioner. Mr. Fukuoka is perhaps most known for his bestselling book The One-Straw Revolution (1978), a manifesto on the importance of no-till agriculture, which was at the time of publication a radical challenge to the global systems that supply the world’s food, and still inspires readers today. Larry Korn, who apprenticed with Mr. Fukuoka in Japan at the time, translated the manuscript and brought it to the United States, knowing it would change the conversation about food forever. The One-Straw Revolution, edited by Korn and Wendell Berry, was an immediate international success, and established Mr. Fukuoka as a leading voice in the fight against conventional industrial agriculture. In this new book, through his own personal narrative, Larry Korn distills his experience of more than thirty-five years of study with Mr. Fukuoka, living and working on his farm on Shikoku Island, and traveling with Mr. Fukuoka to the United States on two six-week visits.

The book follows the author on his travels from one back-to-the-land commune to another in the countryside of 1970s Japan, a journey that eventually led him to Mr. Fukuoka’s natural farm. Korn’s description of his time there, as well as traveling with Mr. Fukuoka during his visits to the United States, offers a rare, inside look at Mr. Fukuoka’s life. Readers will delight in this personal insight into one of the world’s leading agricultural thinkers.

One Straw Revolution by Fukuoka
Check out the Fukuoka forum at permies.com

Chelsea Green
The One Straw Revolution


Permies volunteers and stewards, feel free to update this post

This book is a great prerequisite to reading the "One Straw Revolution". Larry Korn provides context which is helpful especially for a reader unfamiliar with Eastern philosophy. For Fukuoka's book is deeper than simply a technique to be applied. Larry Korn documents his early experiences in Japan that ultimately led him to Fukuoka's mountain orchard and rice fields. Also Korn takes us along and details Fukuoka's speaking tour of America.

The book is well written and was a joy to read.

Larry documents the farming practices of Japan before WWII. Larry explains the origins of America's Organic Farming (Asia) and provides context for why Fukuoka believe's  modern conventional and organic farming are simply "left and right hands". IF you youtube Larry Korn you can find Larry's talk of Fukuoka's methods. Honestly I can't believe(i can but i mean Larry could have) Larry didn't write this book sooner.

Larry Korn worked in Fukuoka-san's orchard and rice fields for a few years and spent countless hours traveling with Fukuoka-san on his two visits and speaking tours in America. Larry Korn is American born. Larry studied Japanese during his college years and traveled to Japan. It was seemingly meant-to-be that Larry Korn would end up translating Fukuoka-san's "One straw revolution" from Japanese to English(the first translation of this book as it wasn't received too well in Japan).

Larry Korn did the work of translating with the help of the other student-farmers of Fukuoka-san. Then Larry was sent off to America with the duty of getting the book published and printed. Larry wrties about this in the book. The book was a hit in America. Larry Korn writes about Fukuoka's meeting with Bill Mollison.