plant viruses can be good

Lh Forsythe
Posts: 1
posted 4 years ago
I registered just so I could post this link to a youtube video of a webinar by a plant virologist.

Apparently, not all plant viruses cause disease - in fact most don't. Some confer drought tolerance and some may extend growing season.
The video is worth watching all the way through.

Very nice! Makes me wonder if part of the great gains I see in the first few years of adapting plant species to my garden is due to infecting them with the local microbes that have proven beneficial to other species.

posted 4 years ago
Thanks for the post! I love it when sciency stuff gets posted.

It may be too early to tell and never-say-never, but the general idea at this point is that the virus either produces some product beneficial to the plant or presence of the virus in the fungus induces the fungus itself to produce something that is lacking in the virus-free strains of the fungus.  Although a slightly different story, it's been known for some time that tall fescue pasture grass is most resilient to stress and drought if it is colonized by a fungus, Neotyphodium coenophialum. Unfortunately, that fungus also produces alkaloids that are toxic for certain grazing species.  So lots of work has gone into making toxin-free versions of the fungus that can still colonize plants and provide stress-resilience: http://extension.uga.edu/publications/detail.cfm?number=C861 .   Lots of the work on tall fescue endophytes was done south of you at OSU with the huge grass-seed industry in that state.

"I wonder if these could be used as a sanctuary for beneficial viruses that might allow quick transfer to new growing locations to jumpstart the symbiotic processes."

The concern in planting it with the intention of supporting beneficial viruses is that it would be a pretty powerful magnet for non-beneficial viruses as well.  Current research suggests that N. benthamiana owes it's unusual susceptibility to viruses to a gene variant (relative to other plant species) normally involved in virus defense (below).
BenthiRdRp.JPG 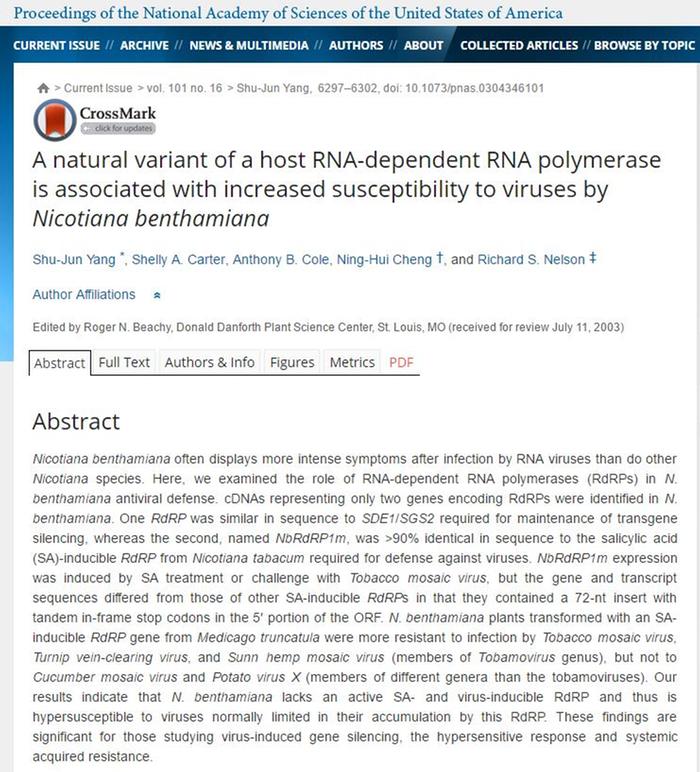 Thanks for the interesting info, and the document!


John Weiland wrote:
The concern in planting it with the intention of supporting beneficial viruses is that it would be a pretty powerful magnet for non-beneficial viruses as well.  Current research suggests that N. benthamiana owes it's unusual susceptibility to viruses to a gene variant (relative to other plant species) normally involved in virus defense (below).

It is something to be concerned about, true. I would certainly be cautious about any choice that radical. However the problem could be the solution; at least in a few years. Once my landraces are established, being able to select for viral resistance would be a huge boon! It might make roguing a bit easier for me and therefor support my laziness. Plus as the video mentions; most viruses are not acute.
Joseph Lofthouse
steward

I am not able, as a subsistence level farmer, to discern whether or not my crops contain viruses. The gist of the video cited in the original post was to document instances in which plant viruses are beneficial to plant life. It has been my position for a long time, that sterile soil is not a good way to grow plants, and the plants grow much better in "germ-ridden" soil. So watching the video reaffirmed my commitment to growing plants in as natural conditions as I can manage: Including being welcoming to whatever bacteria, fungi, or viruses that may be contributing to the productivity of the plants.

I treat my own body the same way: I am constantly eating fermenting foods, and dirt from the garden, and exchanging germs with people and animals.