posted 11 years ago
Hot off the press!

Nori Lamphere
Posts: 31
Location: Onalaska, WA
posted 11 years ago
I got to see this at the workshop at Erica and Ernies a few weekends ago.  It looks great!  Ernie did a test fire for us.

Take a minute and make a donation to support RMH testing/certification.  Paypal your contribution to eawisner@gmail.com.

Posts: 3688
Location: woodland, washington
178
posted 11 years ago
what is the contraption used for the switch?  was it fabricated for this project, or is it an off-the-shelf piece?

Posts: 1
posted 11 years ago
I want to start by saying I have never even heard of permaculture before today and am no way any kind of living example, but I have been perusing this site a bit and there are some interesting ideas here.  However, this idea of a rocket mass heater and in particular this one really scares me.  I've heated my home with a traditional wood stove since I bought it 3 years ago and from what I can tell the rocket mass heater is both inefficient (no secondary combustion) and unsafe.  I say unsafe because of the length of your horizontal chimney as it goes through the floor and the very poor draft that would results, also, I assume the purpose of this length of chimney is to reclaim the heat of the flue gases.  This is not a good idea as cooled flue gases will leave creosote deposits and as anyone who has burned wood knows excess creosote buildup can cause a chimney fire.  In most homes a chimney fire is a bad thing, but doesn't usually burn the house down.  In the case of the rocket mass heater the chimney is running through your floors or you are sitting on it....Yikes! At a minimum I would be disassembling this system every two weeks to clean it out.

Maybe I am missing something and I'm not writing this to turn it into an argument, but I am begging users of this site to stick with the traditional wood stove, hot flue gases are supposed to stay hot for safety not to have the heat re-claimed for radiant heating and the secondary combustion systems offered by all manufacturers now make the burn cleaner than any rocket stove I've seen on this site.  I can't definitely say anything about heating efficiency because I've never seen a rocket stove in action or been in a home with one, but I can't see how it would be better than my traditional stove with secondary combustion, and it certainly is nowhere near as safe.
tel jetson
steward

Posts: 3688
Location: woodland, washington
178
posted 11 years ago
you are missing something, spacecowboyiv, but your concern is appreciated.

the points you raise are certainly real issues, but they are also addressed by rocket heater design.  browse this thread for some more information about them.  or find a copy of this book.

spacecowboyiv wrote:This is not a good idea as cooled flue gases will leave creosote deposits and as anyone who has burned wood knows excess creosote buildup can cause a chimney fire.  In most homes a chimney fire is a bad thing, but doesn't usually burn the house down.  In the case of the rocket mass heater the chimney is running through your floors or you are sitting on it....Yikes! At a minimum I would be disassembling this system every two weeks to clean it out.

You are not off base in your concerns, however, you are not spot on either.

Creosote is a byproduct of incomplete combustion, through poor burn process, impingement or a variety of other causes of incomplete combustion. The RMH does not face a lot of those same concerns due to design, once it fires off the secondary burn chamber, enough of the incompletely burned products do get burned off to pretty much eliminate creosote problems.

While I am not a fan of robbing the flue gasses of their heat, because of the higher level of combustion, some of the significant hazards of this design are significantly reduced. There are still some concerns that have not been proven to have been eliminated, but they are no where near the same level that traditional designed would have at all.

Due to the amateur methodologies used, these units have to be backwards engineered, in other words, they made it, it seems to work, now the science behind why needs to be completed.

Best said, traditional designs clearly define this as a very high risk, in a RMH system, the risk is significantly lower and albeit not eliminated, they are indeed low enough that properly attended and observed, there is no reason to "pull the plug and turn it off" at this point and the owners are experimenters whom do pay attention. I believe to a certain level they are at risk of inventors pride and lack the education on the other hazards to a very limited degree but they are not so closed minded to ignore such issues when presented to them.

If a truly significant hazard becomes apparent, but at this point, a large amount of the hazards of the design no longer exist and while it may not last the usual 10-30 years, they are aware of that too.

Andy Hawkins
Posts: 25
posted 10 years ago
Whatever happened with this?

Its very similar to what I want to do in the floor of my teepee only the stove would be in the middle and the flue would spiral out from the stove so I'd really like to know how this one worked out.
Ernie Wisner
gardener

Posts: 791
Location: Tonasket washington
46
posted 10 years ago
it's heating the cabin like it is supposed to.


no prob i dont have much time so i m getting o as many as i can.

Did you insulate the crawl (slither?) space?

Posts: 791
Location: Tonasket washington
46
posted 10 years ago
no the block of earth that is under the floor was isolated from the surrounding soil with 1 inch of styro board. I left a 3 inch gap under the ply floor to give me circulation space so i would not have moisture problems.

Make note i have not published that stove because it has some bugs in it that i dont like. IT works but not as well as it could.

Andy Hawkins
Posts: 25
posted 8 years ago
So how did it end up performing?

I'd love to see the finished stove and hear how its performing.

I'd also like to know if there a formula for calculating the maximum length of exhaust pipe and recommendations for exhaust diameter.
Michael Quinn
Posts: 1
posted 8 years ago
I am planning on doing this for my house. Have all the pipe and firebrick. Will be putting the stove part together this weekend - then plumbing the pipe. I dread building the thermal battery as it will be in the crawl space! I plan on incorporating the bypass that you show I the video for initial startup - then gradually wean over to main thermal battery...

What kinds of issues are you experiencing and how do you recommend overcoming them?

Thanks!
Justin Stenkamp
Posts: 14
11
posted 8 years ago
I am a professional mechanical engineer and working on a project where we are considering rocket mass heaters as the heating source. We actually were discussing using them in and underfloor application so any more information on this project would be appreciated.

Since I am a licensed engineer I have to work within the bounds of the department of making you sad. Has anybody had any luck getting a RMH system permitted? It was mentioned in a podcast that Paul did with Ernie and Erica. If I recall correctly the inspector came out, thought they put the fire out, was impressed with the system, but didn't know how to permit.
Julia Winter
steward

posted 8 years ago
RMH have code in Portland Oregon, as a variant of masonry heaters. see here for some info: https://permies.com/t/25954/rocket-stoves/Rocket-Mass-Heater-Compliance-Code

posted 8 years ago
I'm told the Portland code passed, but I haven't seen the ATAC website updated with the final code.
I have a late draft version I can share if needed. We have a write-up of the process on our website at http://www.ErnieAndErica.info.

The most relevant existing code (which is more universally accepted) would be:
- masonry heater section of IRC or IBC (right next to masonry chimneys)
- ASTM standard E-1602 for masonry heaters

If you build to those clearances, thicknesses, and so on, it should be permittable in most parts of North America.
You might be able to do it with just mechanical permitting and clearances. Rocket mass heaters actual dead/live loads should be fine on a 4" slab, should not need the 12" reinforced foundations that are specified for masonry chimneys (and unfortunately for masonry heaters too, as most of the European designs are a vertical tower-style heater). Need to discuss this with building department before pouring, tho.

The masonry heater code itself is new enough (late 90s), and they have been rare enough to date, that local building departments still may need a rather expensive making-up-their-mind process for the first one they encounter.
Individual officials friendly, system less so.

Justin Stenkamp
Posts: 14
11
posted 8 years ago
Erica, thanks for the response and resources.
Kristal Cravener
Posts: 10
2
I like...

posted 5 years ago
Have you used the bypass valve innovation on any other RMH? I am curious how well it would do basically using it to switch between systems? For instance, just like you have it in the video one side to heat the floor and the other side of the bypass valve going to a water heater, much like the one Geoff Lawton presents that was made/designed by Tim Barker, I believe...? Since the water heater seems to only need 10 to maybe 20 minutes to heat the water, then turn the bypass valve to the floor side, etc. This way I won't have to build two...?

Going to have to find proper plans for the water heater design, although this picture breaks it down well. They must have welded the copper pipe in place...? If you know where I can buy plans for this design, if there are any available?

Thanks for everything you guys do! I loved the RMH book and all the DVDs!! You guys really break everything down and explain the why and how of it working, so I am not quite as scared to try tinkering and building in the backyard! 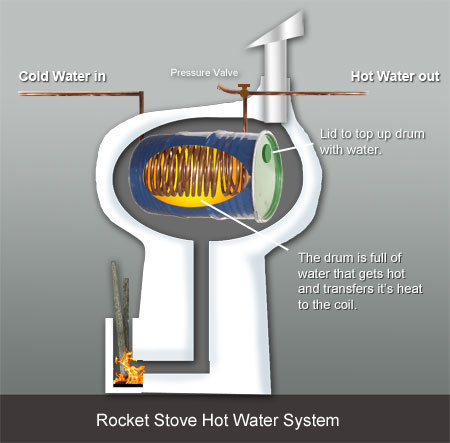