posted 3 years ago
Years ago, Mark vander Meer was here. He pointed to a spot with a lot of knapweed and asked what I was going to do to get rid of the knapweed. He confessed that he still sprays and he cannot think of a better solution.

I told him that wherever I saw something like that, my thought is that that is the exact spot where I wanted to plant a permie (somebody that is bonkers about permaculture). This idea doesn't work for him because he is a forester. He looks to forest land and thinks about one person passing through every five years, and then once every 20 years there might be a crew of 20 to come through and so something to improve the land. There could be some light logging every five to ten years.

Mark is not a gardener. Mark has never raised a garden. None. He has planted thousands of trees and has a bit of a nursery, but ... no garden.

Mark like a lot of permaculture ideas. But somehow the garden aspect of it just doesn't quite fit into his life.

I have a concept of a woodland that is different from a forest - and I think Mark would enjoy that.


So if you plant a permie in that knapweed patch, the permie will need a home and a fence to protect the gardens from the deer and wild turkeys. I suspect that the permie will do earthworks that will kill most of the knapweed. And any leftover knapweed will be plucked by hand. After about four years, about 90% ofl the knapweed within 100 feet of the home will probably eliminated.


When I first arrived, there was a field that was one huge haze of gray with purple - the sign of solid knapweed. We have dug into that and found a lot of sand and a little clay below that field. The sand has been used for lots of projects and the field is now a mix of planted berms and a place to park stuff. In time we will finish the earthworks and set about establishing growies where we park things. But for now ... 99% of the knapweed is gone. And we have harvested potatoes, sunchokes, daikon radish, lambs quarters .... I think we will be building soil there for years to come - but a field of knapweed is now serving many functions and being loved on by ... gardeners.

People who have been here know it as .... arrakis: 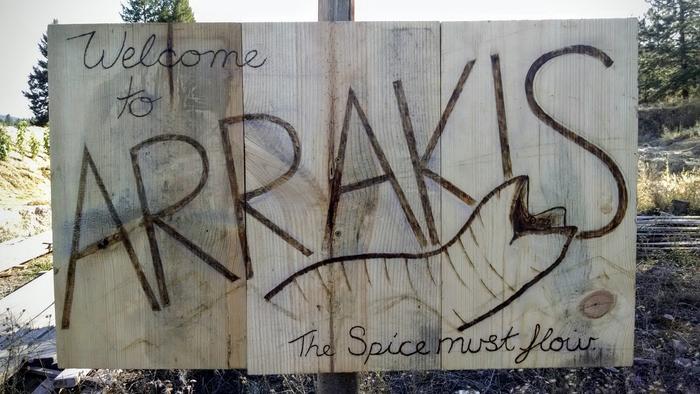 Tomorrow I will have been here for three years. I arrived on june 3, 2013. Jocelyn arrived sometime around june 25th. The plan was to live at basecamp for a few years and then move up to the lab.

Basecamp is one large rock. Not a gardener's paradise. Although we did discover the sand of arrakis, it was not in zone 1. More like zone 3 or 4.

It was clear that a huge chunk of rock was carved away to make a place to stick the fisher price house. This left a narrow rocky spot between the front of the house and steep downward slope. Behind the house is a narrow spot and then a wee bit of "The Rocky Mountains".

To meet our short term gardening needs, we needed some soil to work with. Not only am I a big fan of "adding texture to the landscape" but I also think that the best way to convert "house on a road" to "permaculture sanctuary that is oblivious to a road" is to use a berm. Maybe a berm with hugelkultur.

During the summer and fall of 2013, plans were made for a berm. It would have to be tall and steep because the "shelf" that currently made the front yard was already pretty narrow. 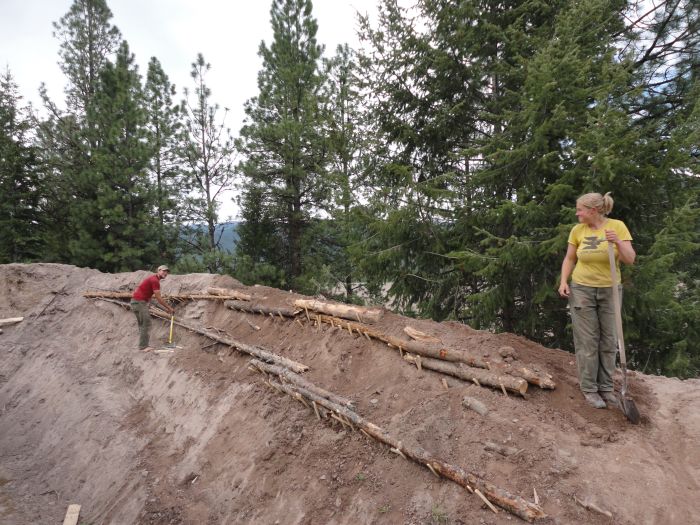 A lot was planted in june and july of 2014 - a bit late for planting things in montana. We didn't have much in the way of mulch. But a few things got started. Critters ate a lot. A sunflower on a south facing part of the berm made it to december 1.

A lot of winter annuals were planted in the fall of 2014. The wild turkeys made the rounds to make sure every spec of green was plucked out.

A paddock fence was completed in june of 2015. The turkeys came to make their rounds of destruction and piled up at the fence not sure what to do.

Seeds were planted. June is normally the wettest month of the year, but the june rains never came. The seeds germinated, got about three inches tall and died. Some garlic that was planted in the fall of 2014 was harvested in the summer of 2015. Lots of native pioneer species filled out the berms, but were utterly destroyed by chipmunks. The chipmunks were discovered by predators late in the season. 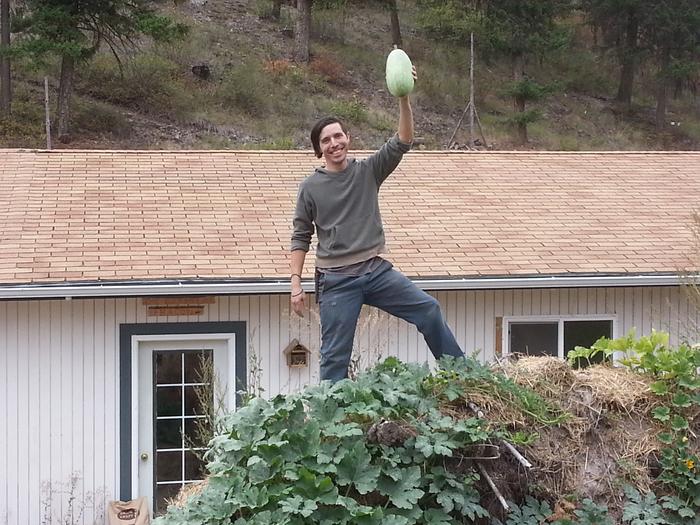 Rabbits worked over the berms this winter and spring - I think a couple of local housecats found the rabbits.

Here is a picture Jocelyn took a week ago of the gate built by Kai to fit in the gate frame built by Josho: 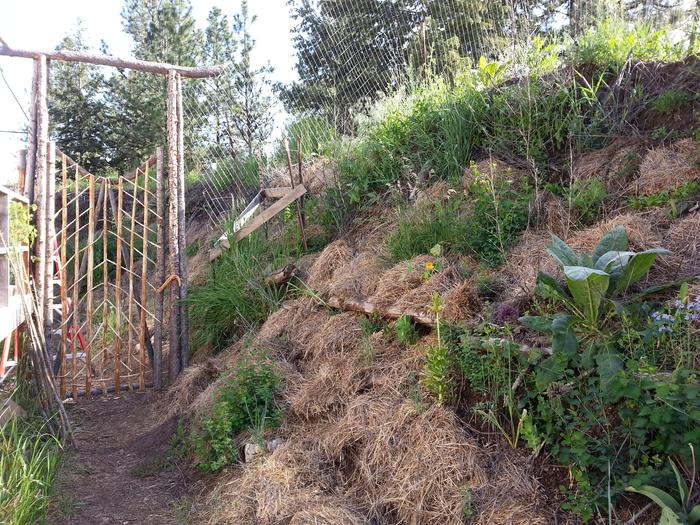 ... ... but the point I wish to make is not so much about the berm, but about gardening a gardener.


In 2013 Jocelyn went out and pulled knapweed. She had some pots with some growies and tended those. But for the most part, she seemed pretty discouraged in the gardening department.

In 2014 the berm went in, and she focused more on a little flat patch she found. At the end of 2014 she was asked where she would like to have a patch and she didn't want one.

In 2015 she ventured to try to plant a few things and they were destroyed by nature.

And now .... she is planting lots of things, finding fun things at the local nurseries, she has a fun gardening apron she likes to wear a gardening apron she got from pantry paratus. It is my impression that she is about 400 times more enthusiastic about gardening this year than last year. I guess some sort of threshold was crossed. The paddock around the garden, the beautiful gate, better soil, lots of mulch, life happening ... it all begins.


I think all of the fence is in with evan, kai and jim. So their growies will now be protected from the deer and wild turkeys. I know that their plots already have a lot less knapweed, and a lot more edibles ...

As their gardens flourish, I think it will act as inspiration for more gardeners and more gardening.

I hope that more people will sign up for the ant village program, which will lead to even more gardening. And maybe we will pick up a couple of residents at basecamp and there be new zone 1 spots here as well. 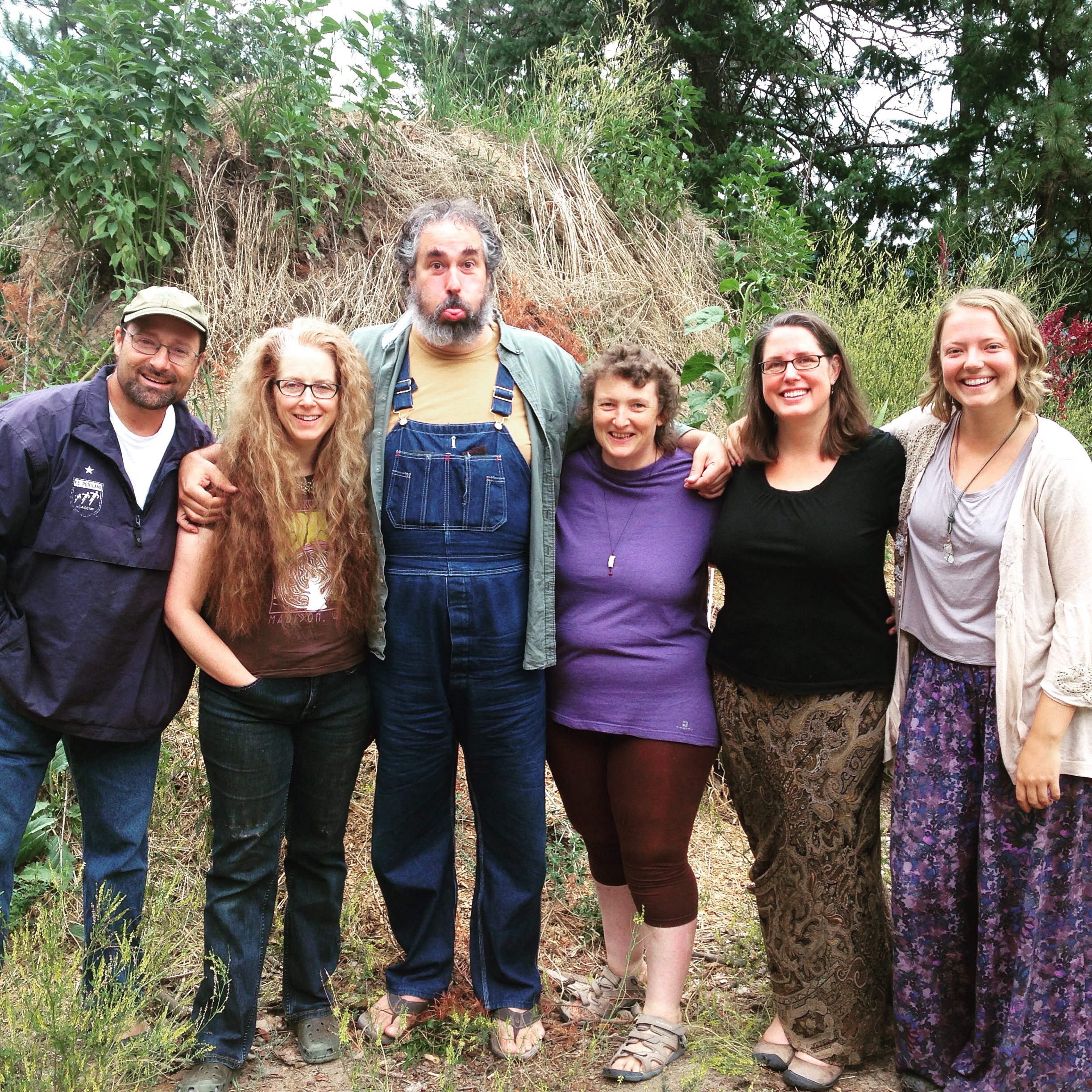 My book, my movies, my videos, my podcasts, my events ... all my stuff!

That's maybe the most important thing you are doing, the cultivation of gardeners. I do believe that all the world's problems can be solved in a garden.

posted 3 years ago
Do you have to walk without rhythm in Arakis?

nancy sutton
pollinator
Posts: 829
Location: Federal Way, WA - Western Washington (Zone 8 - temperate maritime)
56
posted 3 years ago
Lovely story :) And if you were advising an aspiring gardener, what have you learned (the hard way?;) that you would share and suggest, to make their experience .... irreversible ?

posted 3 years ago
Paul, I have seen this happen with my husband. When we bought our place in 2014 and started transforming the front yard my husband was all about the earth works and not involved in the planting and care of the plants. Several months in he would come home from work and wander around the garden to decompress and snack on the veggies. He couldn't tell you what any of the plants were and his only real interest was eating form it.

2 years later he is happy spreading mulch, moving or creating new beds, digging a pond, putting up fencing, weeding, helping plant seedlings and running to the town transfer station to get free wood chips for me. He now happily mows the lawn for exercise and mulch creation. He is slowly learning plant names and wants to help inspecting the bee hives with me. He is loving the garden and enjoying the work that goes into it. It took 2 years to make my husband into a gardener.

Year 1, I tried planting a few things which almost entirely promptly died. It was too late in the year and I didn't understand the property. I did put in solar panels.

Year 2, I started fruit tree guilds, dug up a lot of landscaping fabric, dug a swale / mulch basin off my downspout, and put down a lot of mulch. Felt like a lot of manual labor but sure didn't look like much.

Year 3, like you, the rain stopped at the beginning of May and it was a miserable growing season. I put some more mulch down and learned about watering with five gallon buckets. The mulch basin didn't really work because we didn't get any rain. I planted cover crops in the fall and wrote the year off. Great year for solar.

Year 4 (now), the three fruit tree guilds are functional with very little help from me and I am in the process of putting in six more. I helped out with some seed spreading, division, and very light weeding. The mulch basin got refilled with straw and is back to working. I learned how to water with ollas in the form of clay pots. My plants aren't getting stressed on the hot days. Zones 1 and 2 are actually starting to look quite pretty as well as be productive. Zones 1 and 2 are getting bigger and are better cared for with less work. Vegetables are growing through the dropped cover crops. There are bird species I did not see the first three years. The plants are swaying with bees. I now have snakes that have knocked the slug population way back.

Most importantly and relevant to this thread: I am having fun being a permaculture gardener. It took three full years to start working, but I now have far more for less and can now expand.

Don't let perfect be the enemy of good.