posted 6 years ago
Here is a creation of Lasse Holmes in 2015 that is an indoor rocket wood cooking stove, with a tiny little butt warmer thrown in for giggles: 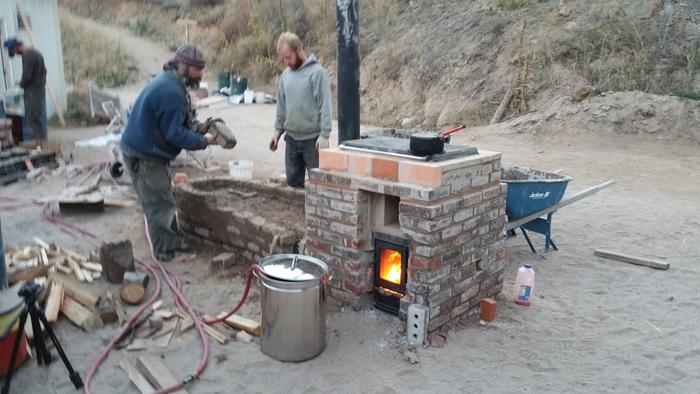 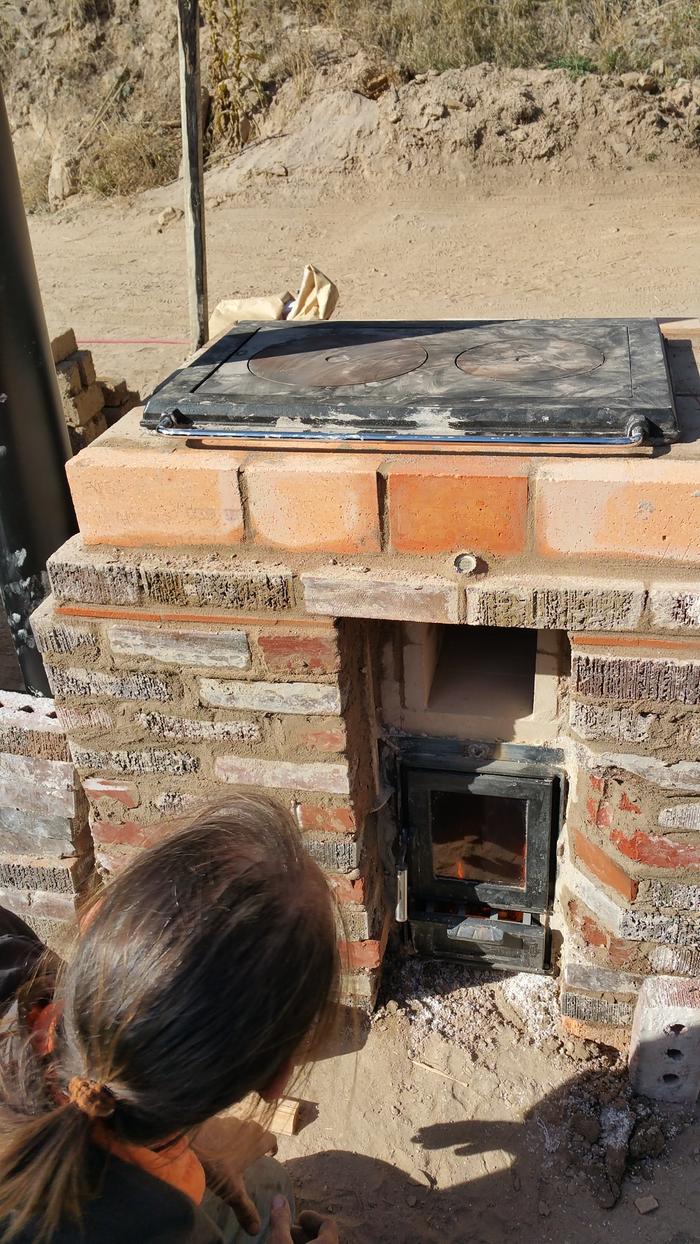 Tim Barkers 2014 creation that has a grill, hot water and and oven, "The Cock it, Lock it, Rocket" 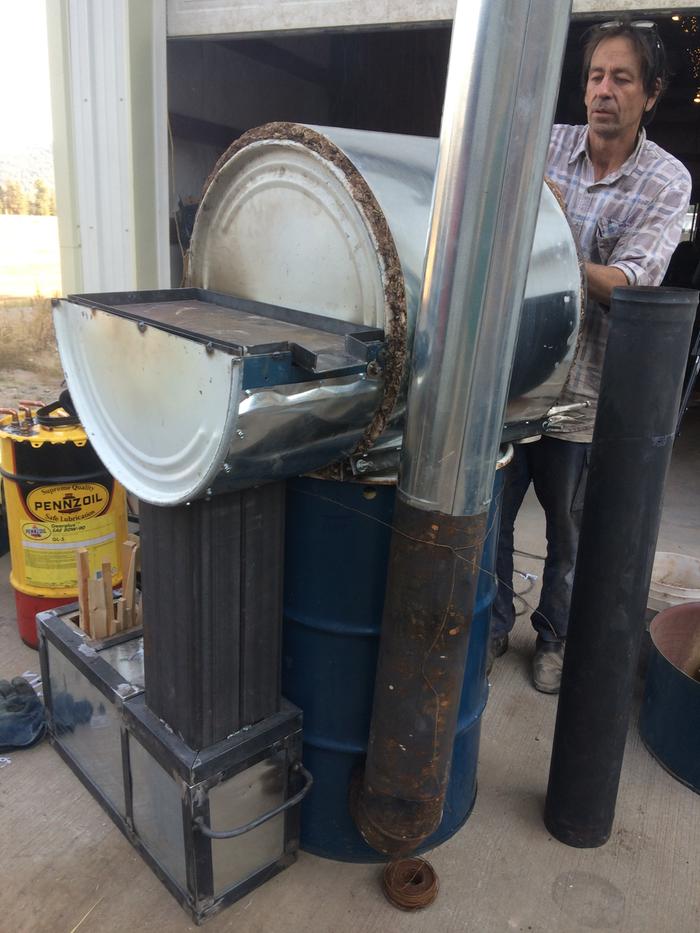 Here is Tim Barker's 2015 design for a grill, hot water heater and oven: 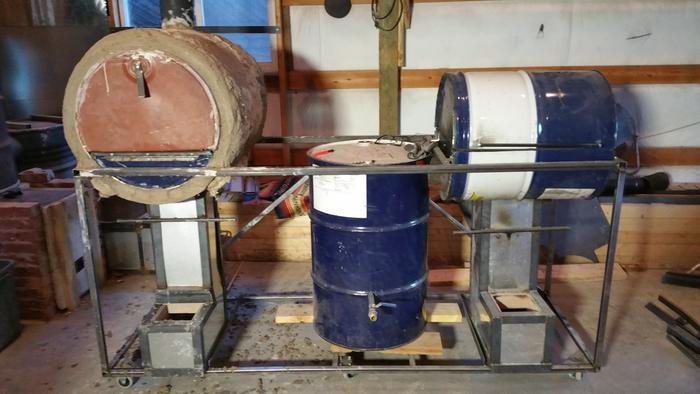 Matt Walker's "rocket smoker" which can be used for cooking, smoking and BBQ .... also has a convenient butt warmer: 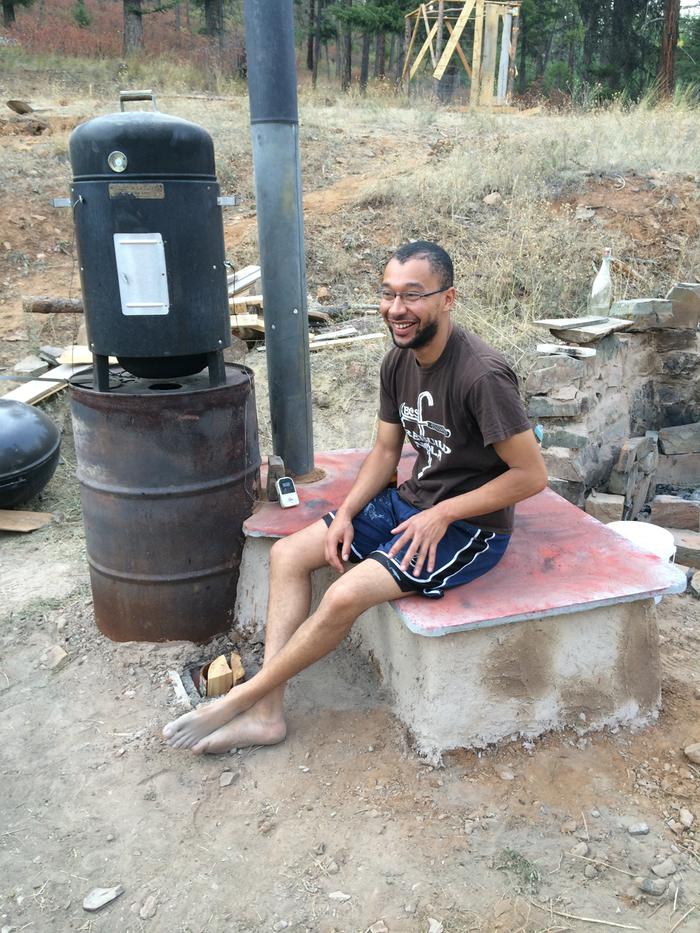 Here you can see the temperature adjuster being used in the evening: 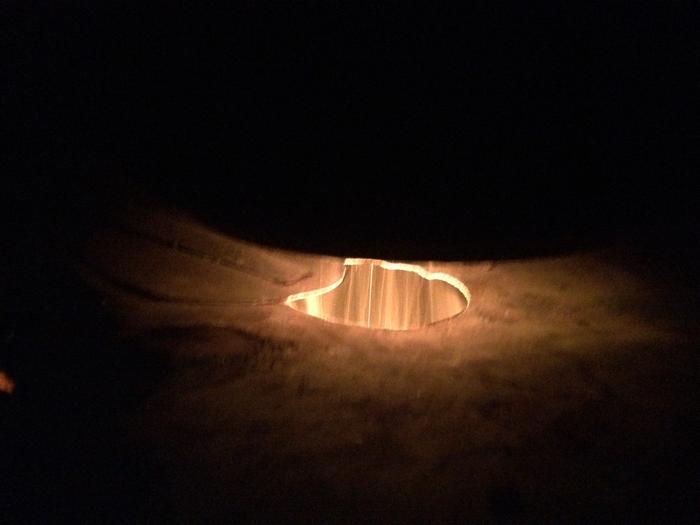 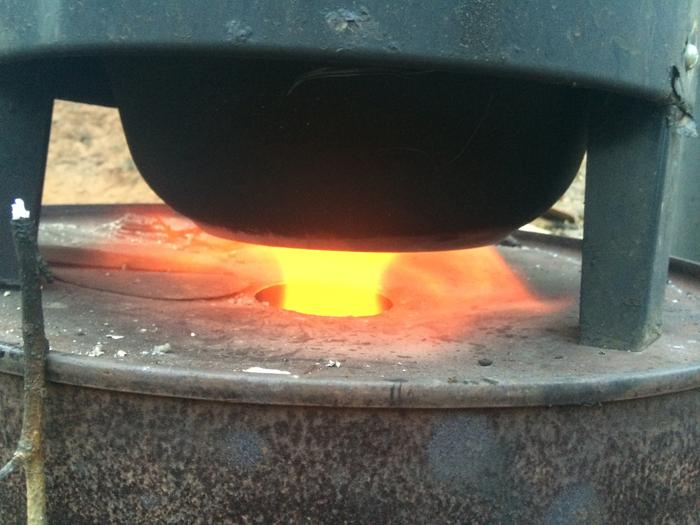 Matt Walker's creation "the ring of fire" used to have a cook surface - but that modified barrel has been replaced with a standard barrel.

We have three different "rocket stoves" and I think two of those are actually TLUDs.

posted 6 years ago
Mmmm...I've been dreaming of smoking ham or bacon with some applewood in the rocket-smoker. Having the temperature gauge on the smoker will make it so much easier to maintain a steady 250°. It's right next to the hay box where I want to experiment with black-eyed peas sans crock-pot.

Seems like it would be even more sustainable and more efficient when the hay box is filled with sheep wool instead of hay, like this one. Positioned right outside the kitchen door it is super convenient!

The plan will be to soak/rinse the dried peas a while, bring them to a boil on the rocket stove and let them finish cooking in the hay box. Meanwhile, my sorrel-and-strawberry-leaf-aide (lemonade substitute) will sun brew nearby. A sustainable feast!

Also, got to saute some wild mushrooms including one morel, YUM! on mini-mouse, the 4" rocket stove.

posted 6 years ago
Last night I got to stack functions in The Tipi! The same rocket mass heater that warmed my bed, also cooked my eggs. And they weren't just ordinary grocer eggs. These were fantabulous duck eggs raised by Evan. Evan built them a shelter fit for a primitive queen; before he finished his own living space! They strictly feed by wandering the Ant Village munching on insects and growies at will. No cage, no grain, no harm and the results are delicious!

Can you see the bubbles? Just the right temperature to fry an egg without it getting cheap-diner-crispy.

The center of the barrel is always the hottest spot. Had I waited any longer the fire would have been hotter and I would have moved the pan to the side. I like em sunnyside up or over easy.


I've been experimenting with the Silverfire Super Dragon Fan Stove for a couple of days. The first attempt resulted in crispy blackened bacon; not the stoves fault, all me and hunger-induced impatience. I'll spare you the horror of wasted pork; the sooty ring around the wood feed shows how much heat there was in trial 1. 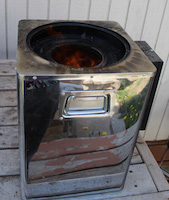 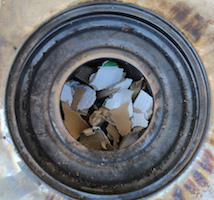 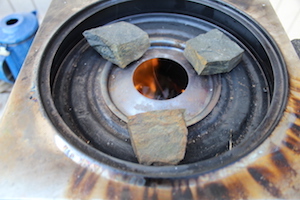 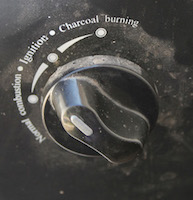 First lesson learned is the same lesson as for all the other rocket-stoves and heaters tried thus far. More paper.

The next trial was far more successful. Once the fire had a steady flame it only took 12 minutes to boil water. Managing the airflow via the electric fan requires keen observation and timing; which I have not yet mastered, thus it took about 30 minutes to get both fires going well. I predict that after 5+ uses one could get the fire going well in about 10 minutes. 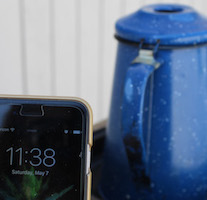 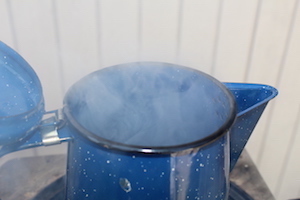 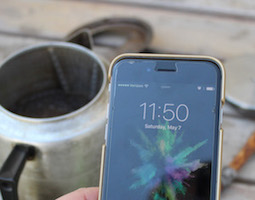 Rocket mass stoves with L-shaped wood feeds require paper first, then kindling, then larger pieces. The Silverfire stove is the opposite, paper on top. The paper should be placed around the inner perimeter of the fire box rather than in the center. The picture above is an example how NOT to layer the paper. Lesson learned. Tossing it in haphazardly or in a centered pile and the fire won't catch the woody bits. Both times I used only sticks and twigs found nearby.

The fan adjustment was a little confusing at first. Basically low is left and high is all the way to the right. When first igniting the paper it worked best when my kettle covered the entire wood feed and the fan was on low. Once it sounded rockety, I slid the pot off the wood feed 0.5 cm and turned the fan on high. there needs to be some airflow between the pot and the 'burner,' but too much too soon and the paper goes out. It is not advised to cook a meal, such as bacon with the fan on high. Also important to remember is that when cooking with cast iron it is best to remove the pan from the fire just before the food finishes cooking. Cast iron retains so much heat that dinner can go from perfect to charred pretty quickly. We don't have the Silverfire cast iron trivet, but flat rocks work just fine.

It was tempting to dismiss this device since it does require electricity. However, the fan can be run off a small solar-power system or a 12v plug. I am confident my Prius could run the fan with a 130w inverter and an extension cord.

The Silverfire Super Dragon Fan Stove will be available for use during the PDC and AT courses.
Julia Winter
steward

posted 6 years ago
That's an interesting stove, thanks! You might want to post your experience as a stand-alone review.

Cooking eggs in the tipi is awesome. Those yolks look HUGE, and so golden. I'm glad you like them sunny side up, because I don't think I could flip that without disaster. You may be a better chef than I and can flip the whole thing with some wrist action. Oh wait. Cast iron pan.

posted 6 years ago
Julia, over easy is good too, but just as you I'm scared to flip em over. Usually my spatula just folds it over like a fried-eff-omelet. Tonight there will be morels cooked on another rocket stove.
Jeremy VanGelder
pollinator
Posts: 257
Location: Proebstel, Washington, USDA Zone 6B
103
I like...

posted 6 years ago
Tim Barker's 2014 stove has a grill with a grease drip. Which is cool. I'm wondering if anyone has ever turned it around so that the grease can drip directly into the feed of the stove? I know some people catch grease and use it for other functions, but it is fun to think of a stove that is somewhat self-fueling.

Tradition is not the worship of ashes, but the preservation of fire.

Janet Branson wrote: Tonight there will be morels cooked on another rocket stove.

Morels - yum! Did you find them on the land?

posted 6 years ago
I did Julia! they are drying in the Tipi right now, but I will take pics before and after cooking. Some were near the tent sites and many are growing in a berm right outside the office door! Don't worry I didn't get too greedy and left some for Paul and Jocelyn, which Joscelyn wants to watch grow even larger. I'm no expert, but it seems like there are some gray morels in the bunch. So excited for a gourmet dinner! Hmm, now which rocket do I use to cook tonight?
Fred Tyler
gardener

Posts: 634
Location: Wheaton Labs, MT and Tularosa, NM
539
8
posted 6 years ago
Here is the rocket stove that Lasse Holmes built in its new home in Cooper Cabin. This was moved up from basecamp during and after the Appropriate Technology Course this summer.

We installed it without the mass bench with the hope that one will be installed at some point in the future. As is, it is a good summer cooking option, because there's no mass bench to heat up.

posted 6 years ago
Where would one buy the cooking plate thingy on the top ?

Posts: 634
Location: Wheaton Labs, MT and Tularosa, NM
539
8
posted 6 years ago
Miles,
We bought that cast iron cooktop from North Stone Heat Supply (a masonry stove supplier). With shipping it was over $400!

posted 6 years ago
That is a gorgeous stove.  We need some pictures of it in action!  How much wood does it take to cook bacon and eggs?

paul wheaton wrote:
Tim Barkers 2014 creation that has a grill, hot water and and oven, "The Cock it, Lock it, Rocket"

Here is Tim Barker's 2015 design for a grill, hot water heater and oven:

Tim's stoves keep evolving aannnd getting rebuilt into new devices! Here is the latest from the 2017 ATC from Paul's all of the rocket mass heaters and rocket stoves at wheaton labs (with pics!) thread: 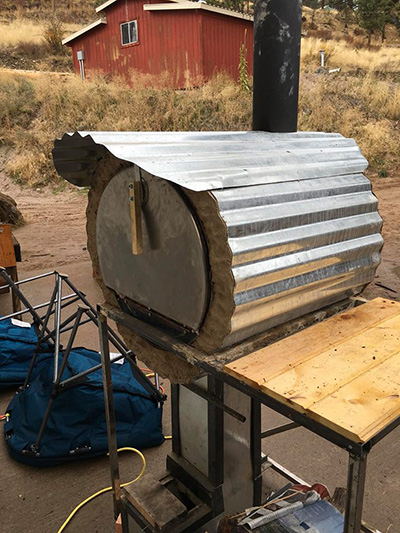 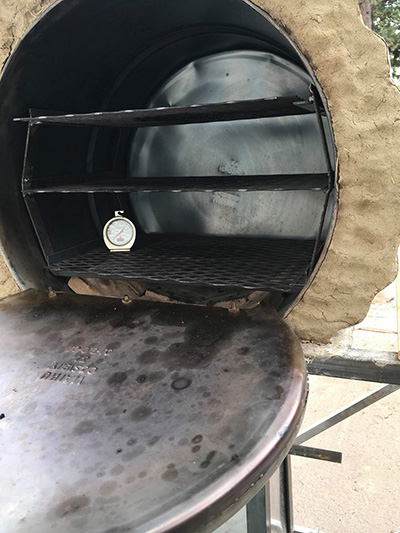 
Davin Hoyt wrote:Erica gives an overview of the Rocket Oven.