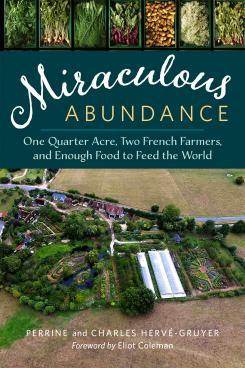 When Perrine and Charles Hervé-Gruyer created their organic farm in a historic French village, they had no idea it would someday attract chefs, farmers, and scientists from around the world. In fact, they had never even farmed before. Charles had spent years circumnavigating the globe by sail. Perrine had been an international lawyer. Their goal at first was just to live a simpler life.
Since setting it up La Ferme du Bec Hellouin their inspiring example has grown, become a beacon in France and in Europe.
They have proved that observation of their site, study, starting from the paris market farmers of nineteenth century to the agroecology traditions of the Amazons their project has become proftable.
Their farm drew the interest of the french national agriculture research institute that started a research on how much can a farmer earn working full-time on a 1,000-square-meter plot of land, and how much food can he or she produce?
This book tells their story, it will be of inspiration to many, their journey will make the reader dream literally and share interesting ideas.


Where to get it?

David Livingston
pollinator
Posts: 4328
Location: Anjou ,France
243
posted 4 years ago
Thanks Lorenza I have" just sent that link to all my french friends

David Livingston wrote:Thanks Lorenza I have" just sent that link to all my french friends

It has been published in french first actually this an english translation, guess they'll laready know the french one

posted 2 years ago
I'm reading this book right now, which I got for free off a table in the lobby of my friend's apartment building! It's hard to put down.  Super amazing stuff in it about how they came up with all their ideas, and who inspired them.  I absolutely love it, so far.  I'm a bit over half way through, and it is so inspiring to see this example of a farm heading in this post carbon sort of permaculture direction, without the tractor and the big fields.  Yay.  !!!   I'll paraphrase someone in the book which described their farm and method as 'market Gardening as a expanded garden rather than a reduced field.' or something like that.

Sergio Cunha
Posts: 55
Location: Southeast Brazil
3
posted 2 years ago
I've read one third of the book and I'd like to know how much costs to them buying a small piece of land by the river with a thatched-roof house in Normandy. And a horse. He says he sold his boat he used to circumnavigate the world for twenty-two years. Hummm...
It seems an amount of money most would-be permaculturers won't have.
Still an inspiring reading.

posted 2 years ago
I'm glad to hear that you find the book inspiring as well, Sergio.  And It is true, that he had a nest egg from selling his boat to start up his farm.  What you seem to be saying, though, is that most permaculturalists have limited means or budgets, which may or may not be true considering what the costs of start ups might be in other regions for farming in other ways (or the means that are available in tropical lands where most farmers live), but even if it were, I think that the reader must look at what he is really saying in this book:  That it is possible to create profitable market farms without the high inputs and costs that are associated with vegetable production where he lives.  The methods that he is describing reduce the costs of market farming to the least possible (considering what they know so far), while gradually reducing labor.  The vast majority of farmers on the planet have access to land, but their costs are super high because they have mechanized, or they till the land with an ox or a horse, or with a mattock or shovel, which knocks them virtually back to the first year as far as soil life and weed cycles go--every single time they break the soil.  This alone makes the tasks of doing the garden work during the season much harder and makes them more likely to want to add expensive fertilizers, buy weed killers or pesticides, or break their backs working to get rid of the weeds.  The land doesn't hold water, it is full of weeds, it requires annual external inputs that take money, time or labor, of some sort... etc.  He admits that he had a start up fund, and that allowed them to try to figure it all out over time, but what he is doing with this book is outlining how important it is to do the research, and to study methods and to brainstorm what might be more efficient ways of implementing them, and to experiment with new things, but to have a principal as well, and that is to do as much as possible without the use of high cost machines or fuels, to build a productive market garden that also, and most importantly, guards and builds soil life instead of harming it.  He outlines the financial inputs and outputs of his farm, so a person can estimate what the startup would be in a different location and with adaptions of his practices.  And I see ways of reducing those costs as well (what particularly comes to mind at this moment is the cost reductions if one studies some plant propagation techniques, like grafting or taking cuttings), and by studying permaculture I think that anybody can adapt and figure out a cost measure that works for their location in the world as well as climate and topography. Most farmers (which is predominantly a poor peasant situation in Asia and Aftrica and Latin America) are living in farming regions, and have access to local food plants which can be propagated for permacultural production and food forestry at very little cost.

Land costs are an issue for some; but that is the case regardless of this book's intent which is to outline the path of inspiring ideas that led them to their particular method, and that it is possible to build a vegetable market garden as well as a herbal and fruit food forest enterprise using hand labor and good planning (the latter of which they didn't have when they started).  I can already see possible ways of improving on some of his methods, and many adaptions that will allow similar methods to work for my colder climate.  People from all over the world (including many from far lesser economic means than France) have come to their farm to see what they are doing, and then adapting (as permaculture needs to be) the methods to suit the local climate/landscape.  While he talks about the problems with big agriculture, and what the mechanization and the chemicalization of farming has done, he is not dwelling on this, but on the solution (because most land being farmed is already not big acreages, and most farmers don't own tractors, but they often do follow the chemicalized approach to fertility and pest management), which is to have a market farm be an expansion of the home garden, rather than a reduction of the industrial field, and again, with my own studies, and with my inspiration from this book, I see ways to hopefully and possibly further improve upon this. The majority of farms on this planet are small scale, but are still causing erosion issues due to breaking of the soil life, and are not efficient use of soil space or labor.  He outlines how this can be changed, or at least how they been able to change things at his farm in Normandy, and the thought processes that led them to their method.

I hope that after reading this, you will be further inspired to delve deeper into what I think are very important insights into building such systems, regardless of having the startup cost, which is considerably less than starting a conventional farm of the same area.

Starting a farm is going to take a great deal of investment, in labor, time, and money, but that is true of most money making endeavors that are worthwhile.  It is far more important to start small and have success than to go big and fail big.  Here's hoping that you find the balance that makes it work for you.  :)

Sergio Cunha
Posts: 55
Location: Southeast Brazil
3
posted 2 years ago
Good points, Roberto.
When I say most would-be permaculturists won't have that money I' m talking about city dwellers who dreams on having their small piece of land and can't afford buying it. I do own mine and trying to do permaculture hier as I am truly converted to it. Those city people comes hier and say how lucky I am for living such a life. Some of them are young and can't find even a job, most of all buying land. Some others are middle aged who worked hard for their whole life and still can't afford it.
Then I  feel really sorry for them. I can't take it smoothly that our society denies land to people who wants it deeply. But may be  that's something for the cider press section.
When I bought that book I had those people in mind. I guess I was misguided by some rewiew. But as I said it is an inspiring reading. Thanks