posted 4 years ago
I just got a package of the above tubers.

I don't expect to have land to plant them in for at least a month, and I've read the stachys don't keep long.

Can anyone recommend the best way to start, or store, them? (The stachys, being in the mint family, I could probably throw in a fire full of glass and it'd grow gangbusters

.) I don't mind doing either; I just want what's best for them. Thanks!
Dave Hunt
Posts: 71
Location: NJ
1
posted 4 years ago
Hi Fredy,
The apois Americana or common called ground nut around here will do fine in a cool dark place for a month. That being said if your groundnut has already been stored for awhile you could always put them in a large pot. That way if they do begin to grow you can carefully transplant them to their final planting site. You can use a potting soil in the pot or find some native soil near a creek bed and fill your pot with that. Ground nuts are often found in nature near streams and river beds.
Unfortunately I don't have any first hand knowledge of stachys affinis but like you said mints are very hardy so they probably will get by okay no matter what you do.
Good luck with them and let us know how everything turns out.

posted 4 years ago
Based on my experience with Stachys affinis (Chinese Artichokes), they will keep well in a sealed plastic bag in the fridge for at least several weeks, and likely a month. You might want to put in a damp paper towel/newspaper to keep them a bit moist. Humid and cool/cold is what you are looking for - trying to keep them dormant. If they are already sprouting when they arrive, I would agree with the advice of potting them up. I did mine one per pot, so they would form little clusters, that could them be spread around the place.

I started most of mine in little peat pots last year, planning to plant them out in the ground when they are bigger. They're still in peat pots now, outdoors, planted under ground level, and under glass/screen to protect from rodents. No action yet that I've noticed this spring, so hoping they survived the winter.

If you live in Ontario, check what we've got in the fruit/nut nursery: https://www.willowcreekpermaculture.com/trees-for-sale/
My wife's permaculture homeschooling and parenting site: http://www.familyyields.com

posted 4 years ago
Thanks to you both.They started sprouting on their own, in the bags, probably while I was writing this. I started them in trays with a lightweight potting mix, some worm castings, and some Foxfire potting soil. Since then they've grown this much, lookit em go. Crosnes in the foreground, ground nuts in the back.
14625475855521822713094.jpg 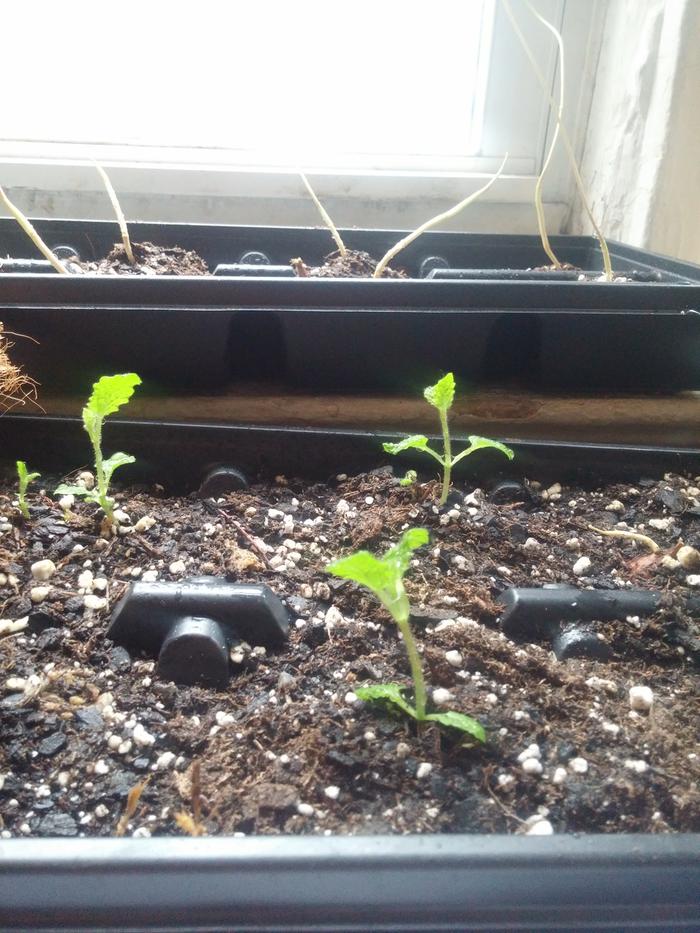 posted 4 years ago
My very observant sister found some Apios tubers along the lake edge near her place. She'd never heard of them but thought they looked "interesting" so she asked me if I knew what they were. She was NOT impressed when I began squealing and jumping up and down with excitement in a manner unseemly for a man of my age and girth. (I was excited because they are an often-discussed plant in permaculture circles but I never expected to find wild ones, and I did not figure I'd be able to prioritize a budget to order any for a few years.)

I stored mine in a plastic bag in my fridge for a couple of weeks and all they did was sprout a little bit. Planted them out and after thinking about things for about three days, they put up about four inches of new stem growth overnight. I am feeling like they are not very fussy!

posted 4 years ago
I don't know that they are not fussy. I ordered mine this February from http://www.sandmountainherbs.com/ground_nut.html. I ordered 25 and probably got 30 tubers. I planted them all that day, some in our duck yard, some by our shed, and four each in two pots filled with soil from our wetlands. All our soil is moist, wetland-esk soil. Of all the tubers I planted, only one sprouted (in the pot filled with soil by our stream). One grew out of 30. I have no idea what went wrong in this process, but obviously they can be killed without trying!

posted 4 years ago
Nicole, I'm wondering if your soil was too wet for them. I had originally thought to plant them in wetlands, but then I read that they prefer well-drained soil, and in any event couldn't simulate wetlands in flats. Planted in flats in a mix of 33% Foxfire potting soil 33% Long Island Compost potting mix (heavy crap, mostly composted bark) and 33% vermicompost castings (and 1% LOOOOOOOOOOVE lol), they are exploding, obviously dying to be in the ground. As they get bigger I am having a hard time moving them around to keep them away from mice as I wait for my land. The mice dig up the tubers, which is a good foretaste of the protection they'll need when planted.

In Stachys updates, they really don't like being in trays. Several have wilted. And the mice love the greens, the tubers only a bit less; they ate the greens off all the ones they could reach, and when one dug up a tuber I put the tray with its 5 survivors on the roof. Over half have gone 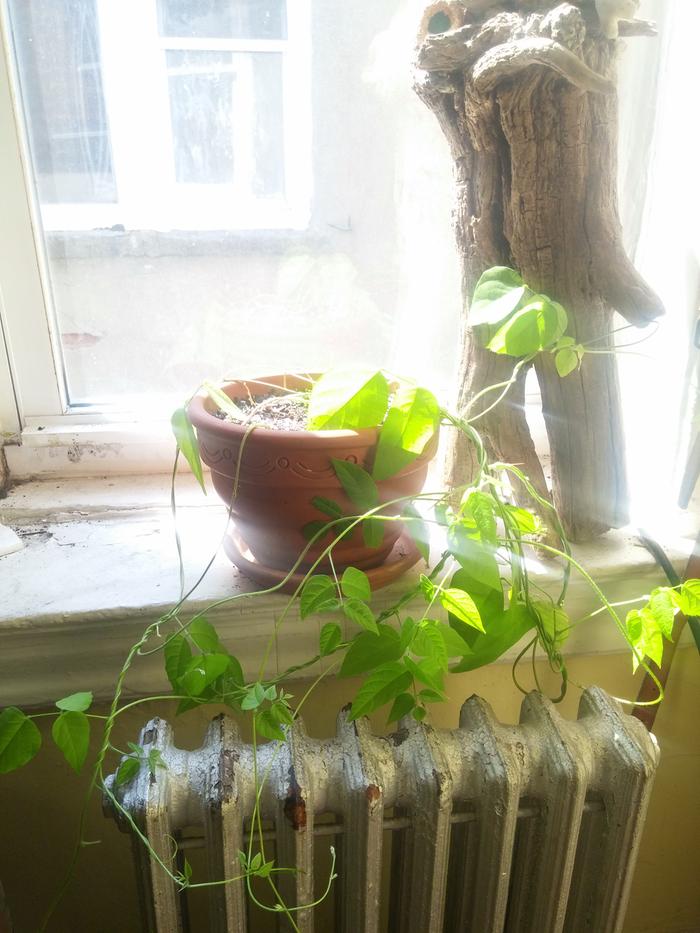 posted 4 months ago
This is an old thread but it's got conflicting anecdotes about whether apios like wet feet or not.  After five years of having them -- I won't say growing -- I am here to reconfirm that they aren't very fussy in the sense of being very hard to kill, but the ones I have, which were found in wet soil, much prefer saturated soil in my garden to any other option.

As I mentioned five summers ago, my sister found some wild apios in saturated soil along her lake shore here in central Oklahoma.  I took them home and I still have them.  Frankly, as an unimproved variety I don't really eat them; the tubers are small and they haven't impressed me a lot with their taste or texture.  But I maintain them, because it would take work to stop.

I've had them in every type of pot and container in my container garden.  (I tend to only grow tall stuff in the ground because it's not good ground, it's full of eaters, and it's way down there, where my not-very-bendy self has a hard time engaging with stuff properly.)  Every fall after the foliage dies off, they sit around somewhere until spring.  And every spring, I look at that pot (which looks dead/empty) and go to dump it in my soil bin, whereupon I find the string of apios tubers.  So I plant them in a new pot, they grow all summer (usually making a nuisance of themselves by climbing/strangling something I like better) and the cycle repeats.  But they also SPREAD, because any little string or micro-tuber that I miss when I'm repotting winds up in some other pot, and the distinctive apios foliage pops up in mid July after struggling to the surface from wherever it was buried some random nine inches deep or whatever.  So I have lots of these.  It would not be unfair to say they are like weeds, albeit welcome ones, in my container garden.

What I have learned over time is that in my dry/hot summer conditions, the best way to keep them is to put whatever pot they are in in some sort of bucket or tub that's about half as tall as their pot, and then just keep that lower tub completely full of water.  That way, they are always in very wet if not saturated soil.  They grow better that way.  Drying them out does not kill them, but the foliage dies back massively and they may be done for the year, or at least until they get a couple of weeks of wet.

This year, for the first time, I got profuse flowers.  I don't believe it's a coincidence that I kept their feet wetter than ever before, in a bigger tub.  I have always been a little bit uncertain that I had apios, to be honest; it's one of the reasons I haven't talked about them much.  But the flowers are distinctive: