I've gotten good enough at starting and heating up the Tipi heater that I can get up at 7, make myself eggs, clean up, and be at the morning meeting at 8. Makes my day exponentially better if it starts with breakfast and tea.

This morning also saw progress of the grass front. Don't know if I've advanced the front or if I'm surrounded on all sides. I swear they tunnel behind me as I work. And today we worked in the cold drizzling rain. I think I filled up my plot today, put in a bunch of fava beans and radish, mostly for soil improvement but I'm sure a bunch will be eaten. Once it warms up I'll add tender vegetables like tomatoes.

Also spent time in Erica's plot plucking grass and mulching over the area. Didn't take too long but there is always more.

And I talked to Josiah and got some advise on grafting onto the apple I've been working around. We are going to try a bit of grafting on Thursday.

I went up to the greenhouse after lunch to finish trimming the eves, then Josiah showed me some work to be done at the Abby and where to sift gravel and sand. Looks like a good deal of work to be done. And I got pulled into thinking about and prepping the Abby I forgot to get a picture of the finished eves. You will have to settle for a cat picture.
GardenMycelium.jpg
WaterInGarlic.jpg
StuckSandmin.jpg

Anybody ever sifted their own gravel before? I've sifted gravel out of a dry cement mix to turn it into mortar mix before, but today Jen and I took rocky excavations and sifted them to gather up rough gravel for burying posts. We got it done pretty fast then took about 15 buckets over to the Abby for later post setting. Then I went back to prepping the Abby wing wall for repair, stripping off cob and exposing posts. I'll get a picture of progress when it isn't such a mess. But I did get a pic of the trimmed eves of the greenhouse.

Bonus while working, I just finished the audiobook of "Defending The Undefendable 2" (Haha Jordan, better keep up)

After a tasty smoothie for lunch Joseiah, Jen, Matt, and I planned and gathered up stuff we'll need to make splitting the bootcamp into two with one group on the lab. We put together all the food stuff, water, fuel wood, and tools. We are certain to miss some stuff but won't realize what until we get going.

Matt and I ran up all the food in the ranger. Then all the wood we could fit. Then got some wood split but there is a lot more to do.

Tomorrow we test out splitting up so going to be a crazy day.
CutEves.jpg
LabFood.jpg
LabFuel.jpg 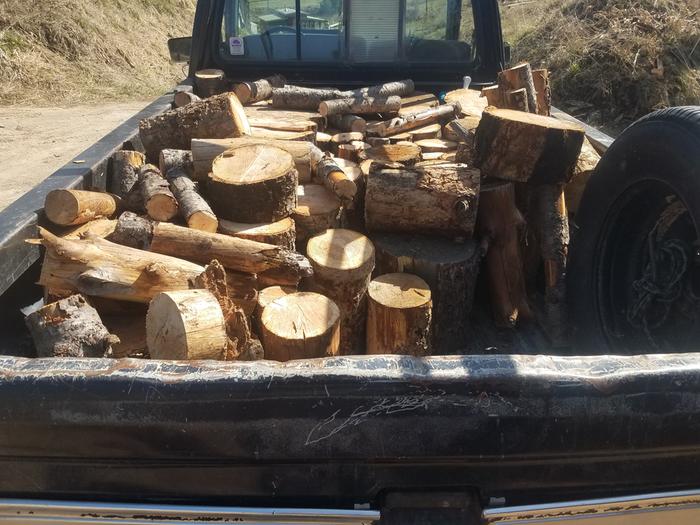 We still are sorting things out to split the bootcamp, getting closer.

This morning Matt and I got to taxi around the willow feeder cans that had been filled up. 3 from basecamp and 2 on the lab. Now stored with the rest of the willow candy. And we brought up sawdust to the empty can by Willow Wonka and filled a barrel full of sawdust and put it next to the Chateau. I think the lab team will be well supplied now. Matt and I also chatted about how quickly fish can spoil due to it's fatty bonds being highly unsaturated and about sunrises and sunsets we've seen from home compared to ones in Montana.

After a long morning of hauling heavy bins and well placed poop jokes, it was nice to have a tasty lunch and sit with the boots.

Then Matt and I finally got to what we wanted to get to this morning, Allerton Abby work. I got a good bit of work done on the Abby wing wall. Pulled out 3 bad posts and dug down another foot and a half for a deeper footing. The plan is to put gravel under and around the new posts. We're going to set a new post and pull out an old one. And work our way over until we do all of them. Then we can finish the grey water line to the greenhouse to be run in front of the Abby wall.

Around 3:30 Josiah showed up with some 2x10's and we attached them up flat to the greenhouse eves, another step closer.

After work I talked with Dez and Erica about classroom improvements, I'd like to help with some of the creative bits but it's going to depend on other projects to be done. 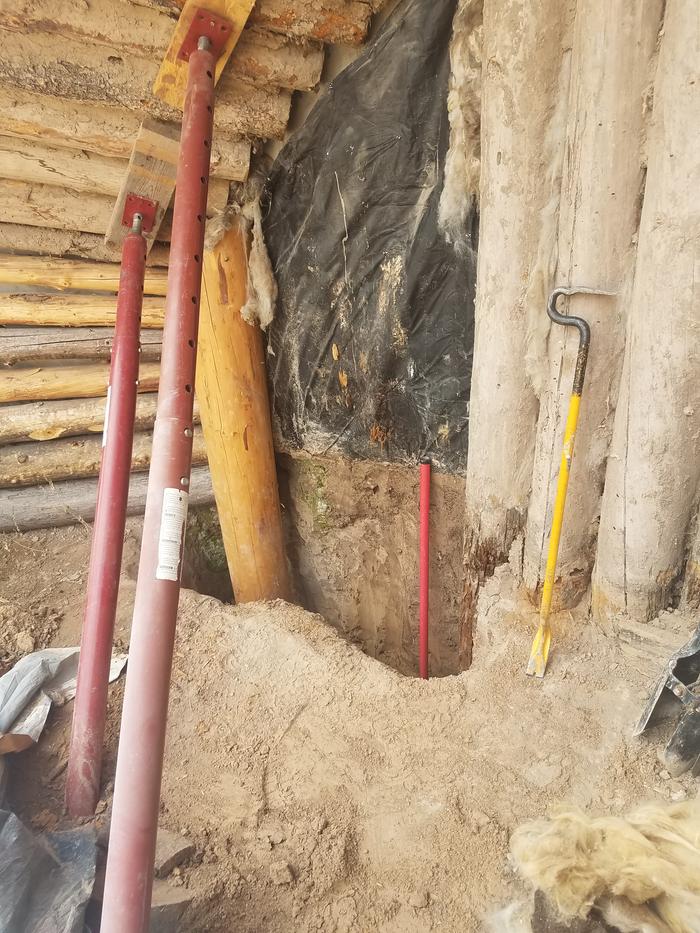 Josiah walked me through two different types of grafts and did some with me. He was a big help and let me use some potting mix he had prepared last year for babying the little trees. I've got the pots in the library where it's warm and I can see it everyday. I've got some more cuttings to play with later but I hope these grafts take. I had two different apples, Calville Blanc 'Hiver which is an old French heirloom apple, and Northern Spy an apple from New York good for juice, cider, pies, and storage.

After lunch Matt and I brought more stuff up to Cooper Cabin. Then we had to start heating up the cabin so we got to try our hand at lighting the rocket stove and rocket heater in Cooper Cabin. They are both different from ones I've used before and took some watching and tinkering. I got the stove going and Matt got the heater going. Then I had to leave Matt to organize the place while I went over to the Abby to peel a great big log for posts.

As I got started it started to snow, and snow, then rain, then stop for some sun, then snow. Wasn't too bad, I got warm by moving around. In the two pic below you can see the log moved over and I can attest I still haven't gotten the hang of using the Force. So I had to prop it up on my own and balance it so the bend in the middle wouldn't spin the log as I worked. From start to finished it took about 2 hours and 20 minutes. Now it's all ready and should be long enough for at least 2 posts.

Finished up with enough time to meet up with Matt and help split more firewood for about ten minutes. And then the day is done, time to rest cause I'm pretty worked over with all that peeling. 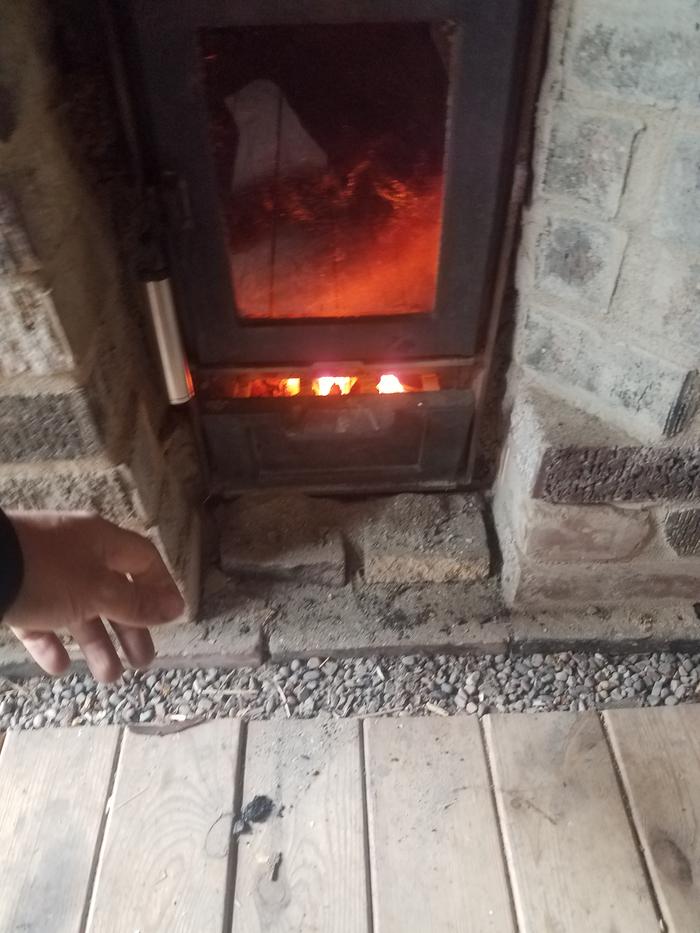 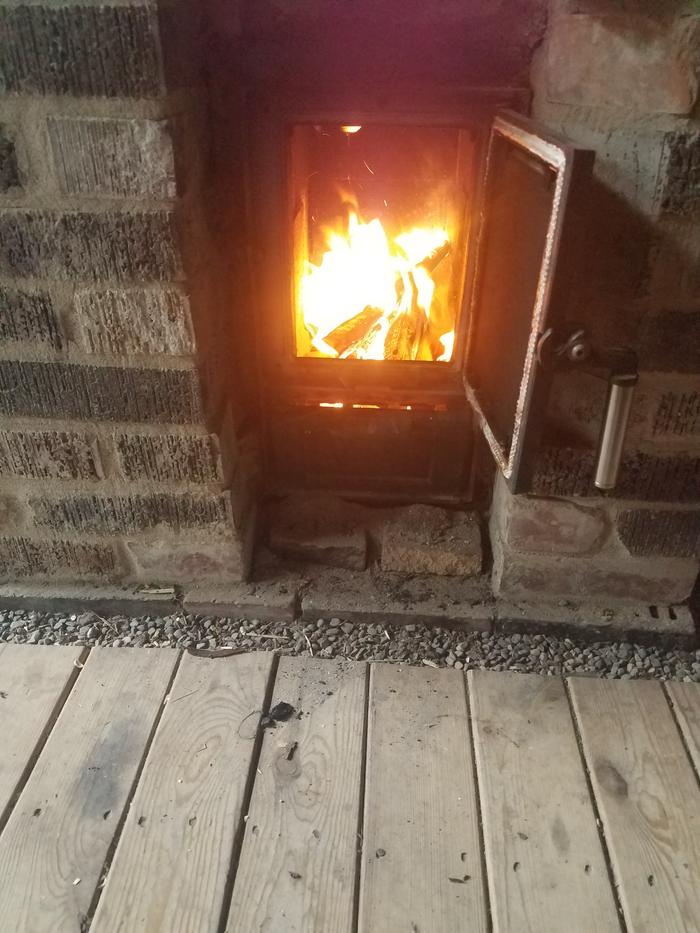 Another busy day here. Started the morning with Josiah drawing out plans for the glass going on the greenhouse. They are going to be about 3'x8' and double pane. It is supposed to be ready in two weeks. Really excited to see them go on.

Then Josiah took Matt and I up to cut down trees for posts. He walked us through the hows and whys of safety and strategy. I got to cut one and there is one picked out for Matt to fell. It's the first large diameter tree I've ever cut. Definitely need some practice on lining up the cuts and keeping them on the same plane.

Fun surprise, got some homemade cookies in the mail. Thanks Mom, their great!

The afternoon was all about collecting the last bits to go to Cooper Cabin. Once we got up there we spent hours organizing and cleaning. I planed most of the shelves so they weren't so rough and hard to clean. Spent hours doing it, note to self plane boards before screwing them down.

Jen, Josiah, Matt and I spent some time just hanging out, making the place comfy, and sipping a bit of Josiah's homemade wine. Josiah and Matt made a great dinner of stir fried veggies, peanut sauce, and ground bison.

Now I'm typing up on the Tipi berm, hope this can reach the interwebs from here and I've got to go read some of Alan Booker's book to get ready for Monday.
11768.jpeg
11764.jpeg
CooperCabinKitchen.jpg
PlanningShelves.jpg 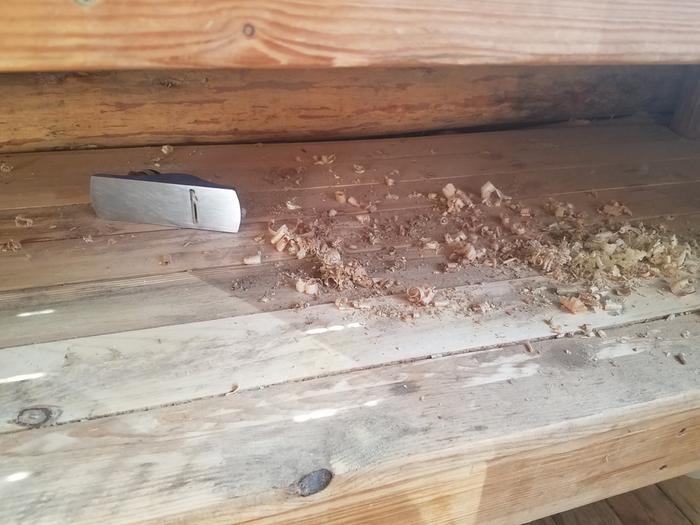