How to build stairs on a steep hillside?

posted 4 years ago
I have NO experience with cobbling together anything that needs to stand up to the elements and be weight-bearing. Our yard is on a steep slope. There is one side with a natural "alley" where it would be very handy to have a set of stairs. (Right now you can scramble up and down but it's a bit dangerous.) The width of the "alley" between the fence and the hill is 1-2 feet (shown below). Underneath is plastic landscape fabric (which I'm not really allowed to get rid of, but could maybe negotiate), then hard-packed dirt mixed with old tree roots. (Some of the random protrusions on the hill are old stumps that were covered over with the landscape fabric.) Would it be feasible to build a set of stairs over top of the fabric, rather than by digging into the hillside? How could it be done so it would hold up? It seems like if I could get some short wooden planks to stand up vertically, it would be easy enough to just fill in the space between them with dirt or gravel to make the tops of the stairs. Maybe I could use a post hole digger and stick poles in there, nail the vertical planks to them? I just don't know how to tell if it would hold up over time; I'm seriously a newbie at this.
16-02-03_slope2.jpg 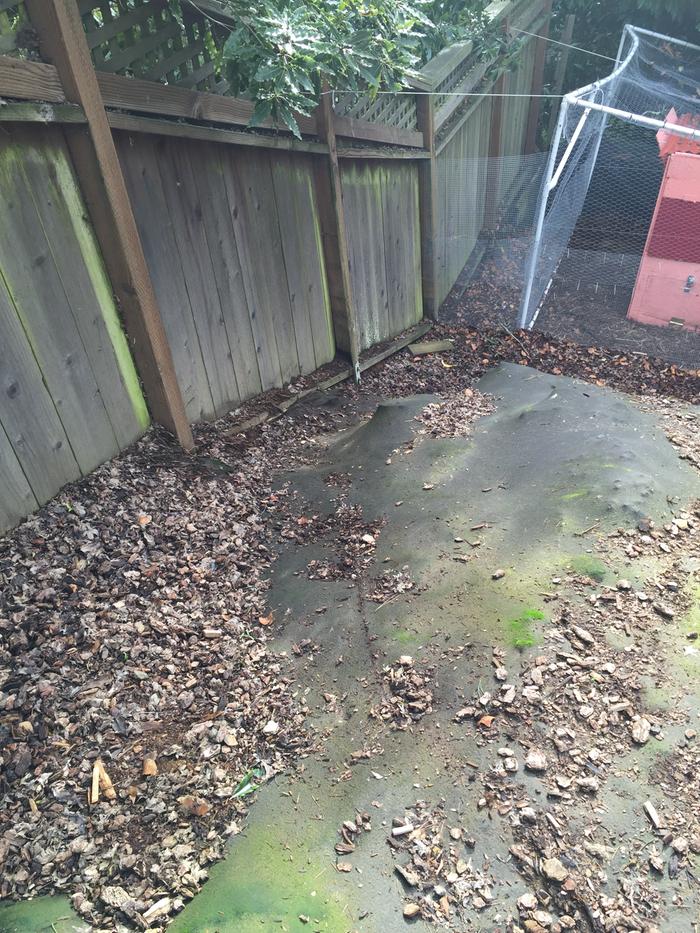 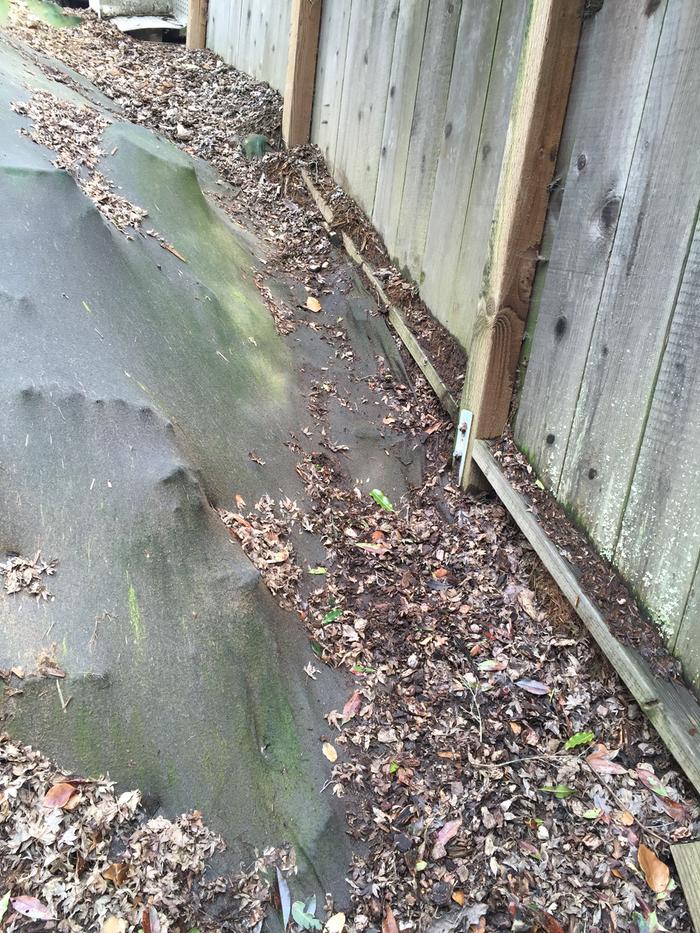 Jack Edmondson
pollinator
Posts: 428
Location: Central Texas zone 8a, 800 chill hours 28 blessed inches of rain
76
posted 4 years ago
From the pictures it looks like a big mess with the stumps under plastic. Yikes. I am going to assume whatever you want to do runs the risk of violating the surface integrity of the landscape fabric. That might make someone very upset.

I would suggest laying a 2x12 plank vertically up the slope. It would need to be pressure treated and varnished to slow down decay; or find a recycled plastic decking material like Trex that will not rot. Every 10-12 inches nail or acrew 1x 1 strips for traction. Basically like a gang plank onto a boat. Then you can lay the board on the ground without puncturing the fabric. Fill in under and around the board to give even support and keep it from moving about. Cheap and easy; and no one upset that the erosion barrier is torn up. Also easy to pull up if the situation changes.

A log ladder can be laid on top of the fabric. We'll drained soil can be dumped against each rung, to create a stepping surface.
Steve Oh
Posts: 51
Location: SW Ohio, 6b, heavy clay prone to hardpan
16
posted 4 years ago
I think it would be best if we understood a bit more of the situation.
Why is the landscape fabric "untouchable"? Is this a rental property? What about building codes?
Why do you need access? Are you trying to move heavy gardening materials or just taking a stroll?
How much water runs through that "alley" when it rains?

There are codes for building stairs, tread width requirements, maximum riser height, handrails, etc. If you are in a situation that doesn't even allow you to puncture the landscaping fabric, I can't imagine a non-code compliant set of stairs, that opens up liability issues, would be acceptable. Anything you do that would be considered safe will require being anchored, probably be a minimum of three feet wide and require a handrail on at least the "open" side away from the fence.

Additionally, although Oakland isn't a very wet area,with only 24" of rain a year, that is still obviously a natural drainage for the yard. It also appears to be heavily shaded, if the moss on the fence is any indication. That likely means materials will stay wet and rot quickly if not properly treated. Water damaged stairs on a steep slope sounds like a serious injury potential, which can translate into a serious lawsuit. Even if someone is trespassing, you can be liable if they are injured. Again this all depends on the situation, of which we know very little, so advice here is difficult. But, regardless, any "safe" stairs are going to be a major undertaking.

If I only needed casual access, I might consider some large stainless eye lags (lag threaded screw eyes) screwed into the 4x4 fence posts and a thick rope handrail, if that would suit your needs.

posted 4 years ago
Thanks for the replies so far. I like the idea of the gangplank or log ladder. I knew that there was a solution that I just couldn't stumble upon on my own! There is a great salvage place 15 minutes away and I can slowly buy suitable pieces of wood as I see them.

To answer some questions:
It's a rental, but the owner doesn't care what I do as long as everything can be undone when I leave. I can't screw into the fence itself. But building codes and lawsuits are not a concern.

No one would be using this but me (though I'd rather not injure myself). Not even a trespasser would have reason to go down the hill as the only thing there is the chicken coop.

I go up and down a few times a day to care for the chickens and pick up dog poop. The current way up/down is not particularly safe either, and I'm surprised that I haven't fallen on my ass while carrying 50 lb bags of feed.

Some water flows down during rainy events but most if it goes down a different path.


If those answers change any recommendations, fire away!

Jackson Vasey
Posts: 17
Location: CT. Zone 6a
8
posted 4 years ago
Before I dug into my hill and installed cinder blocks, I used an old wooden ladder laid down on the ground. So, it's like the gang plank, but you're stepping on the dirt instead of a board in between the 'rungs'. I would walk only in between the rungs, and put my weight on them if I was gonna slide backwards.
Todd Parr
pollinator
Posts: 1793
Location: Wisconsin, zone 4
95
posted 4 years ago
If you don't mind some hard work, I would ask the owner if you can remove the plastic and dig into the ground a little. You can make steps from "urbanite" that is free almost everywhere. Your expense could easily be nothing but your labor and the steps would last basically forever. If you only made the steps 1-2 feet wide, it wouldn't be obtrusive. If I were the owner, I would be thrilled to have someone install the steps for me for free.

posted 4 years ago
Todd, how would you secure the urbanite in place?

Posts: 3289
Location: Upstate NY, zone 5
180
posted 4 years ago
About the same way you would secure stone steps. There are a few things to make sure you do, and avoid. You ideally want (urbanite) slabs that are large enough in width, depth and thickness that they can lock into each other, with the back edge of one step tucked beneath the next step up. Obviously for steps you want a top surface that is flat and level, but if possible, you want the bottom surface to be wider than the top, and very importantly not to be rounded or convex.

I have seen many people set stones for a walk or steps, and they usually set the flattest, widest face up and the more rounded side down. Unless the piece is so heavy that a person can't tip it by standing on an edge while the piece is on a flat surface, this is a recipe for failure. Imagine standing on the rim of a dinner plate. Is it going to stay where it is, or is it going to tip? No matter how stable it may seem in solid dry ground, what will happen when the ground is wet and muddy?

First you need to find out what the slope is. Hopefully it is on average at least twice as long horizontally as it is high. Much steeper than that and you stand a good chance of the soil not being able to hold up for the long term, depending on the character of your local soil. For safe travel, steps in a flight should all be relatively uniform in length and height, so you can take the next step and be confident that your foot will fall where it should without looking closely. In code construction, that means the rise between treads in a flight must be the same within about 1/4". In informal construction for occasional use, you have a bit more flexibility. A good way to keep yourself honest is to get a straight stick or board, lay it on or just above the ground next to where you want your stair, and mark off tread nose points at uniform intervals. As long as the final steps match this fairly well you will have a good stair.

There are several rules of thumb for the ratio of riser height to tread length, one being that rise + run should equal about 17" to 19", which makes a comfortable stepping stride for average people. The steeper the stair, the smaller this sum should be, and the more gentle, the larger. When you measure your total rise and run, note the ratio and the sum of total rise and run, and select a number in this range that divides evenly into the sum total. If it is steeper than 7 units rise to 10 units run, look for a smaller number that gives a larger quantity of steps. I have found 7 1/2" : 10", 6" : 12", and 5" : 14" to all be comfortable stairs. 8" : 9" works as long as your feet are not too big or clumsy. Proportionally larger measurements can work as long as you are comfortable taking notably larger steps than you would indoors. Something like 5" rise to 24" run would require you to take half steps in between each tread, and could be uncomfortable to walk on without watching your step carefully.

So actually setting the steps...
After laying out the positions of the tread noses, start from the bottom and dig in as needed to set the first tread solid and level. As this will have no bottom brace, make it the biggest and most stable of the pieces on hand. If you need extra thicknesses of material to get the correct rise to the next step, add them while making sure they are stable, sticking out into the ground at the sides if necessary. Then dig and set the next step. You would do best to look over all the material before starting, and decide on which pieces will be treads and which face of each should be up and which edge should be exposed, if there is more than one option. If practical, make the base of the exposed edge sticking out a bit farther than the top edge unless the piece is large enough for the next step up to anchor its back edge solidly. For a light-use stair, the treads can even be narrower than deep, say a foot wide by 18" back into the hill. If there is a thicker edge to the piece, you can either set the thickest edge exposed, or use a bracing chunk under the exposed edge and make this thinner with the thick part toed into the hill. This is something that needs to be evaluated on a case-by-case basis, and is where art and experience come into play. You most likely don't want one side of the exposed edge to be thicker than the other side, for stability.

When you reach the top of the flight, you probably want a wider, heavier piece than others, as this position gets more uneven traffic than elsewhere.

posted 4 years ago
Wow Glenn, thanks for that write up! Very helpful!