Paper wasps and mud daubers build nests in two bat houses that are located on a nearby wildlife refuge (SW Washington state) - see below.  The bats seem to tolerate the wasps/daubers, but over time the wasp and dauber nests consume much of the space in the bat house, and I have to clean them out in the winter when the bats are gone.  So how can I change something (e.g. bat house design, interior surfaces, attract wasp predators, etc.) to discourage the wasps and daubers while still attracting bats?

Posts: 123
posted 10 years ago
id be excited about the wasps.  but then again ive got a garden right here and the wasps are voracious predators of caterpillars and other things that mess with my food.  can you just make the houses a bit taller/longer to accommodate bats and wasps?  i guess you still have to go through the hassle of cleaning them in the fall/winter because the wasps dont reuse their nests.  yeah i see your problem.
Jeff Mathias
Posts: 125
Location: Westport, CA Zone 8-9; Off grid on 20 acres of redwood forest and floodplain with a seasonal creek.
4
posted 10 years ago
Hi adunca,

To me that last picture says it all. Looking at it from the perspective of "The problem is the solution"; I think there just is not enough good natural habitat in the area for all. You have healthy trees and old dead trees without bark but nothing in the middle. The bat house is the next best thing and everything around knows it.

It seems to me your only real solutions are:

1. Figure out how to create, replicate or mimic the natural habitat. I do not know much about bats but the bark in picture four looks like good natural habitat. See how it is peeling up leaving exposed areas similar to the bat houses. I think if you could work something out to mimic that bark up and down the tree and on many trees in the area you would create more habitat than the bat houses alone. Something along the lines of fixing warped rough cut lumber in shingle like fashion to create pockets that mimic the bark peeling away. This would also allow the bats, wasps and daubers some separation up and down the tree. Really what I think you need is more trees in the just starting to lose bark stage but since that is not realistic the above seems doable and mostly permanent if implemented with that in mind.

2. Figure out a way to redesign the bat houses in a way undesirable to the wasps and daubers. Although I think I have heard there is a special relationship there; something about the wasps being defenders and protection from mites and ants etc., so that may not be optimal to actually do away with them.

3. Way more bat houses in the area. You already know what this will lead too, but for a short time solution until you can get the natural habitat going strong this could work, but I do not think this is a true long term solution unless you and those who may follow are committed to winter cleanings. It would reduce your work load by only needing to do some not all bat houses each winter. If you go this route I would figure out how to collect some of the bat waste for fertilizer since you are there cleaning anyway you may as well stack some functions.

"Study books and observe nature. When the two don't agree, throw out the books" -William A Albrecht
"You cannot reason a man out of a position he has not reasoned himself into." - Benjamin Franklin

Posts: 3605
Location: woodland, washington
147
posted 10 years ago
you could try wormwood or mint rubbed in there as a repellent.  the bats might not like that either, though.  interesting problem.  not knowing much about bats, I would sort of expect them to eat up the wasps.  interesting that they might be pals united against ants.

is the refuge Ridgefield?  should I not guess to protect the innocent?

posted 10 years ago
Thanks Jeff and Tel.

Tel - I too was wondering if there is some plant-based aromatic that the wasps would not like but the bats would ignore.  I have no idea what that might be though.

Re: Ridgefield refuge - no but you are close.  It is Steigerwald Lake (near Washougal), which is part of the Ridgefield complex.  You can see these bat houses from the new trail at Steigerwald.   As you might guess, I built and placed them.  I had to do some convincing in order for the refuge manager to let me place them.  One of their requirements was that I do all the bat  house maintenance.  Thus my question.  I actually don't mind doing it, I'm just wondering if I can better understand what is happening here, and also it is kind of a pain to clean out the nests.

One design change I am making is to make the interior baffles one piece that is removable.  Thus I could more easily clean and inspect it (for parasites and usage).  I plan to make two more of these, to use at a couple of other refuges farther up the gorge.

You are right about not enough good natural habitat for bats - that is why I placed bat houses here.  Around here, the most common natural bat roost is under the exfoliating bark or in cavities of tall, dead/dying trees that get a lot of sun and are near water.  However those are becoming more and more rare.  A bat house simulates exfoliating bark.  Bats will use anything that is close to exfoliating bark or a warm tree cavity - loose shake or lap siding, attics, even belfries

.  The sun exposure and proximity to water are key requirements.

As you noted there are some trees in the area with exfoliating bark.  However these are mostly cottonwood trees, which decompose rapidly.  Thus the bark loosens and falls off within a couple of years.

Regarding natural habitat for wasps and mud daubers, I'm not sure what their natural roost space would be, but apparently it is very similar to bats.  One thing I did not mention is that we are doing habitat restoration in this area, i.e. planting thousands of native plants.  We put a protective tube around most of them, and the wasps really love those tubes.  There is at least one wasp nest in every tube - and there are probably 3,000 tubes within 1/4 mile of this spot.  So I think there is plenty of wasp nesting space.

These are non-native wasps which I think is a factor.  There are some native wasps around but I have never seen them use the bat houses.

I like your idea of putting up "fake bark" using lumber.  I have heard of people doing this, with some success.  But the refuge manager is very sensitive to aesthetics so I'll have to think about that a bit.  Perhaps I can glue some real bark to the lumber, like I did on the bat house landing pad: 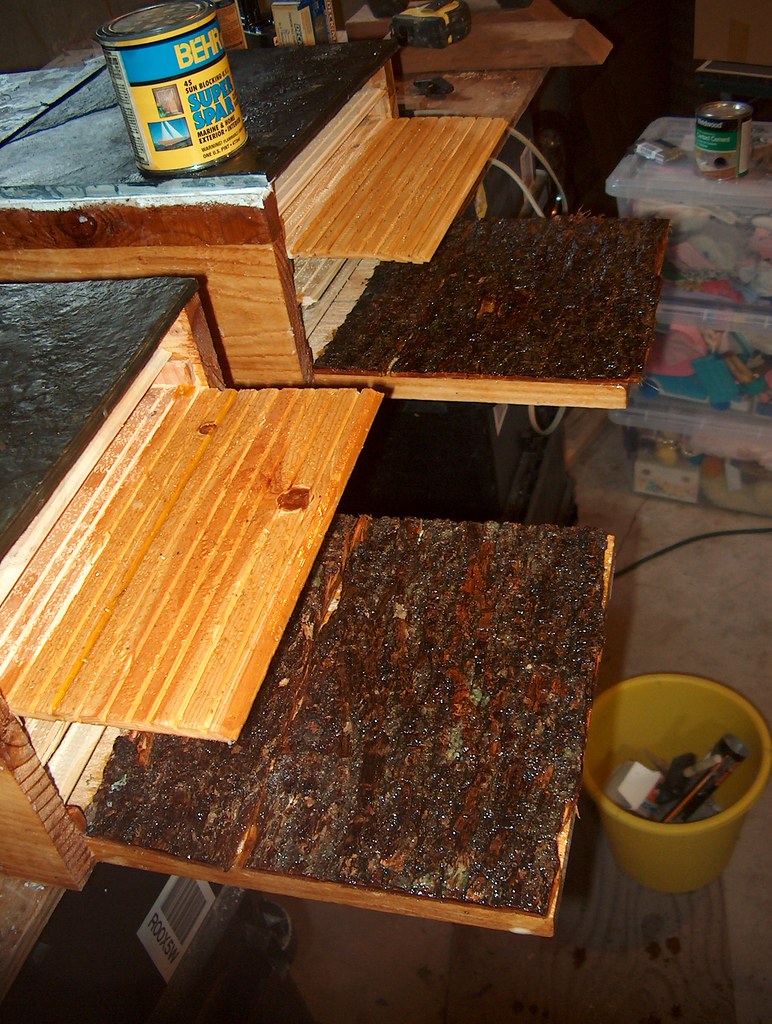 Re: more trees, we are planting tons of trees, some of which will eventually be killed to provide nesting cavities for birds and roosting space for bats.  But that will be decades from now.  All of the dead trees in this area were killed by beavers.

Re: relationship between wasps and bats - that could indeed be that wasps eat bat parasites, and perhaps the bats know this.  But the bats do seem to usually choose crevices that do not have wasp nests.

Re: way more bat houses - I don't think the refuge manager would allow that unless the two houses I have become completely full.  Thus far the most we have had in one house was 6.  The bat house is large enough to hold around 300 bats.

Re: collecting guano - with only a handful of bats there isn't much to collect, but if we get a lot then yes I will definitely collect it.
tel jetson
steward

Posts: 3605
Location: woodland, washington
147
posted 10 years ago
I've heard that some wasps and hornets can be driven away with a decoy wasp nest.  might be worth a shot.  something as simple as a paper bag full of air can work, though I don't imagine that would last long exposed to the elements.

If you get too far from the stone age .. things go haywire.

tel jetson wrote:
I've heard that some wasps and hornets can be driven away with a decoy wasp nest.  might be worth a shot.  something as simple as a paper bag full of air can work, though I don't imagine that would last long exposed to the elements.

i usually let wasps do whatever they want around my place because i love what they do for me in the garden.  on the other hand, this summer i let them do their thing on my front porch and at first it wasnt a problem.  the paper wasps we have here in central texas are super docile and wont sting unless you step on them or bash their nest.  well, they kept building more and more and more and more and etc. colonies to the point where i had to knock them down.  all that takes is a powerful stream of water from the hose.  had to be a hundred wasps flying all around me and none of them sting me.  pretty nice of them.  there where three really large colonies with 30-40 wasps each. probably 10 smaller colonies with 5-10 wasps.

some wasps didnt rejoin their former colonies and started building their own new colonies.  so i ended up with more wasp colonies but the wasp population started to decline.  wasp activity is now a lot lower because most of the wasps that where just sitting around their former nests have mostly left.  i also started removing small wasp nests using the shoe+splat method.

thats kind of where im at right now.  i still have some wasp nests on my front porch but theyre much smaller.  winter will be here soon enough which will kill them off for the season.  not sure why i recounted this entire story... maybe it'll give some wasp insight.