posted 5 years ago
Hello folks!
Today I've run for the first time my biochar set up, which I got from youtube (can't link right now as I'm on 4g, no YT)
Very simple setup, as seen on the picture.

This set up doesn't have an inner chamber, a barrel inside a barrel. The guy in the YT video was running this design 4 at a time and seemed very succesful. I was not.
I loaded the barrel with dried branches and broken up pallets.
Light it up.
Put the chimney. It seemed to burn incredibly well, fire was hot and most of the time, there was little to no smoke and still a roaring fire. I thought it was a good sign.
But in the end, I have a bunch of ashes at the bottom, and little to no charcoal.

My air intake is about 20 holes of 0.5 inches at the bottom. It was lifted from the ground by a simple piece of wood.

There are small air leaks at both connections of the barrels.

My diagnosis is ... too little air coming in from the bottom? Not enough mass, too many small branches?

Any inputs are welcome!!! 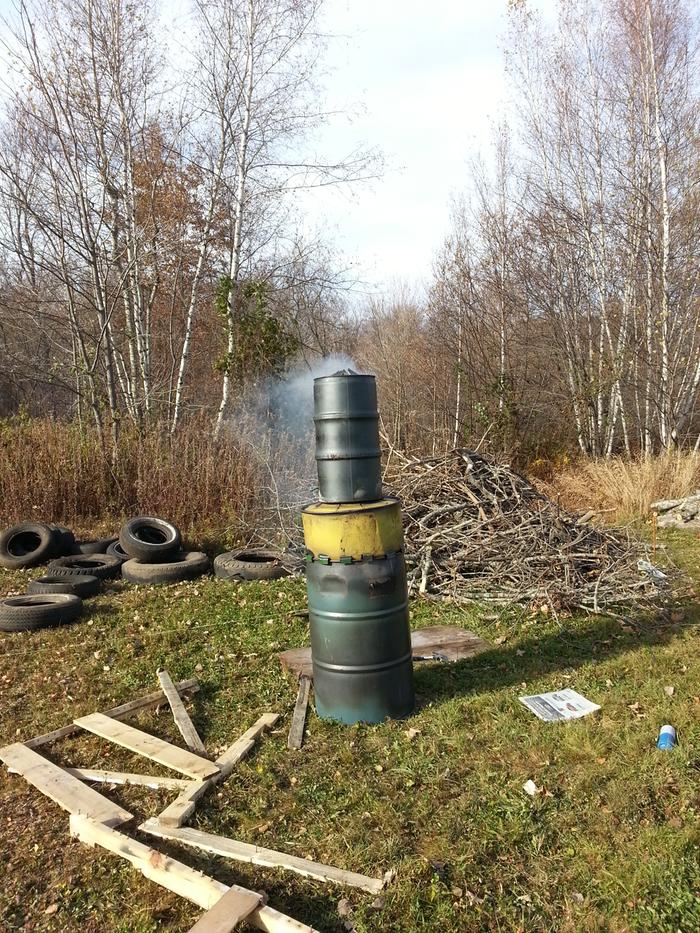 To make charcoal, you have to stop oxygen from getting to the charcoal after it has formed. Additional oxygen will cause it to burn to ash. Oxygen is excluded most easily by placing (some of) the wood in a retort (an inner steel can), so that it off-gasses, but doesn't burn. It can also be accomplished by cutting off the air supply to the fire at the appropriate time, for example by covering the inlet air holes with dirt.

Charles Laferriere wrote: It seemed to burn incredibly well, fire was hot and most of the time, there was little to no smoke and still a roaring fire. I thought it was a good sign.

No, a bad sign. This has to be a SLOW reaction, lots of smoke (unfortunately) and no roaring. My burns take anywhere from 4-6 hours to complete.


But in the end, I have a bunch of ashes at the bottom, and little to no charcoal.

My air intake is about 20 holes of 0.5 inches at the bottom.

posted 5 years ago
From what I've read and watched, there are plenty of different ways to make biochar. My own method uses a homemade TLUD stove. Essentially it is a metal garbage pail with a zillion holes punched in its bottom, set upon metal "legs" inside a larger metal garbage pail with a zillion holes punched in the bottom. There is no lid put on the inner smaller garbage pail. The lid for the larger garbage pail has holes punched around the perimeter and in the center a single large hole about four inches in diameter for the flame. This lid acts as a flame constrictor and encourages the pyrolysis gases to ignite. With proper running, this stove produces no smoke after the first few minutes. Unlike charcoal making, I run a "smokeless" stove for biochar.

The inner garbage pail is packed tight with wood pieces, be they old lumber, coconut husks, or tree branches and twigs. No sawdust since it doesn't allow the air to draft upward. It is lit from the top and allowed to burn for a few minutes before the flame constrictor is added. I will let it burn until the flame has died back and is no longer robust, indicating that pyrolysis is completed. I then remove the flame constrictor, pick up the inner pail with a hook so that I don't burn myself, and dump the embers into a bucket of water for quenching. I could use a hose to stop the burn, but quenching with a bucket works for me.

Some observations.....
....the embers are still burning and glowing bright red when they are quenched
....if not quenched, the embers will continue to burn completely down to ash
...my method results in some ash in with the biochar, which is not a problem for me
....depending upon the material being charred, I get 1/8 to 1/4 biochar by volume. I've seen other stoves that produce a higher percentage of char than this method.
....the burn will last anywhere from 30 to 50 minutes depending upon the fuel being charred
....I can cook atop this stove for about 30 minutes and not interfere with the biochar process as long as I don't have pan too close to the flame outlet.
....the pails burn out after a few months of use. The inner pail's bottom burns out first so I usually wedge a new bottom on it made out of folded up old wire fencing that I've bolted into place so that it does fall out when I empty out the embers.

My method is not the best. But I can usually get the pails for free from restaurants who are replacing their gummed up or damaged pails. So it is an economically acceptable method. No or little smoke is a major plus for my situation.

Druce Batstone
Posts: 58
9
posted 5 years ago
I failed with the conventional barrel in barrel method (indirect heating). Now, I use a single 200l steel drum that I learnt from http://bruceteakle.blogspot.com.au/p/blog-page.html - very easy, consistent results for lump charcoal. The method would not work with finely divided material.
Edward Lye
Posts: 37
1
posted 4 months ago
Please have a look at my setup: https://permies.com/t/148449/Introducing-ARS-biochar
To innuculate the biochar, I use compost tea from my ALL-B: https://permies.com/t/141679/Introducing-compost

Garden Mastery Academy - Module 1: Dare to Dream
will be released to subscribers in: soon!
click here for details
reply
reply