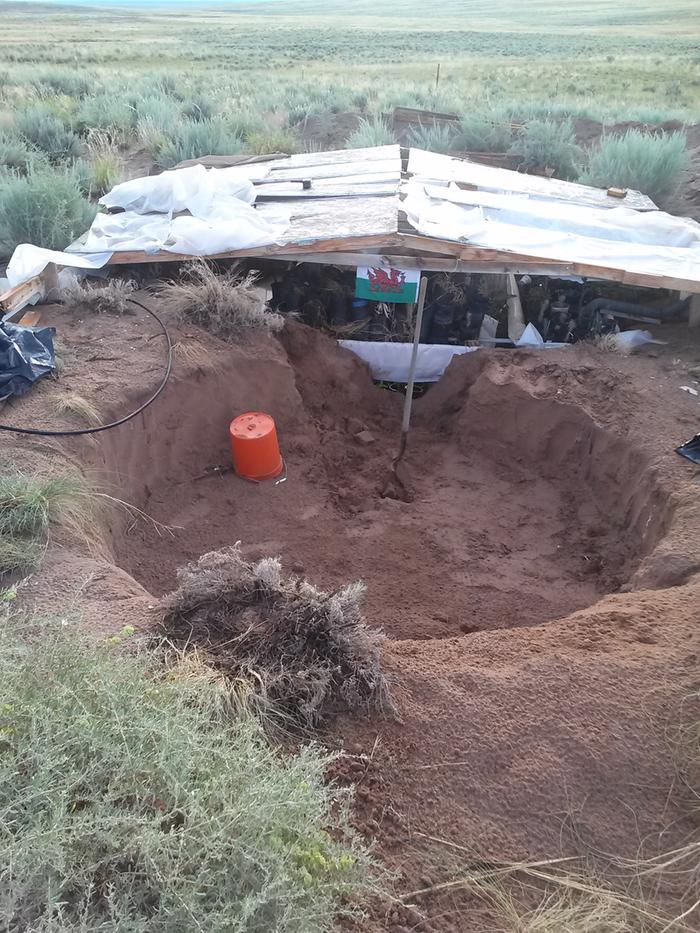 i did not get a chance to test that theory.

its about four and a half feet deep. i dont know how much the soil depth affects the temperature.

in january mid day it was 40° outside and 70° inside. at night everything froze.

in june it was 100° under the roof and the water in the (hydroponic) trays never got higher than 70°, at night the tray water was 60°

this winter i will see if i can keep the water warm and maybe tent the trays instead of trying to keep the greenhouse warm.

the circular hole in the foreground is what i dug to put a 1000 gallon kiddie pool. i was thinking bluegill.
since i am only there a week out of every month and a half there was no use for that.
i extended the pit another 12 feet.not yet so deep though, i bonk my head on the rafters.

right now i have 190 gallon size pots in the trays. one tray always has water. the water is circulated by a 24 volt bilge pump powered by a 12 volt, 7 amp solar panel.

the other two trays are in line, one higher than the other. by day the water in the lower tray is pumped up to the higher tray and flows back to the lower. at night the upper tray will dry out.

both systems have an external supply of water( 50 gallon drums) attached to a float switch.

i dont know what will work. im not there to babysit it. i just want to prove that i can grow food out there.
in october i will roof it over with 22% white relective nursery shade cloth. a neighbor had success with it.

i dug the pit with a shovel.
the rafters are two 2 by 4's bolted together and held at the angle i wanted by a third 2 by 4 , also bolted. all pretty cheap. the shade cloth is going to hurt though.

sorry i dont have any pictures. i accidentally erased everything yesterday. im working on retrieving them now.

this area is in northeast arizona on the purgatory plateau. if you look down the vally you can see patricia sanders house.
halooo patricia!