My bike has a 48 volt battery. I could see using a coil similar to what is found in old vehicles,  to create the ultimate taser jolt, which would destroy the tools used by the thief. When  bolt cutters are used on a chain,  a circuit would be completed,  and ZAP!  The current would cause the bolt cutters to arc and be ruined.  I have seen this happen many times at demolitions. It's usually done by workers who are confused by the concept of flipping the main breaker.

The design challenge,  is to build a good lock that will destroy only the tools and keep our thief alive,  to steal another day. In north America we're very concerned with the health and well-being of our thieves. Perhaps you live somewhere where this wouldn't be of prime importance.
............
Whenever I have a house which I don't want the copper stolen from, I leave a live,  exposed wire in a very prominent location. Nocturnal thieves generally go for the easiest,  most visible target. The flash must be blinding.  They have left me bolt cutters, flash lights, gloves and many other artifacts.  I arrived one morning, to find a broken window and a really nice little sledgehammer with blood all over it. The door was not opened.   If only I had set up a camera.  He could be YouTube famous.
.......
I'm not going to pursue this invention right now. It's something for the memory banks, should the need arise.
20150712_123426.jpg 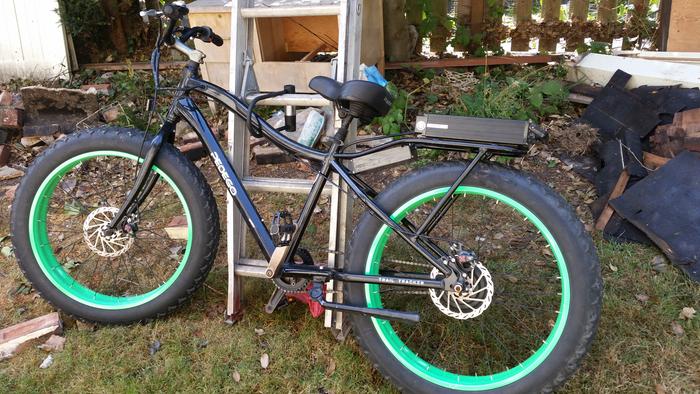 posted 7 years ago
Would the short circuit damage the battery in any way, or drain it substantially? I'd see that as an important design consideration. (More important than thieves' health, but I'm rather misanthropic about theft.)
Eric Thompson
pollinator
Posts: 493
Location: Longview, WA - USA
62
4
I like...

posted 7 years ago
Start with a small non-lethal prototype - just enough to stop a dog that is peeing on the tires...
Lydia Hines
Posts: 4
Location: Los Angeles
I like...

posted 4 years ago
One wise guy said that all bikes and locks should weigh 50 pounds to be safe. The lighter and more expensive the bike the heavier and more robust the locks.