Adventures in Permie-ing up a small city plot

Genevieve Higgs
pollinator
Posts: 117
21
posted 5 years ago
Sharing accommodations uses less resources - good thing. Multi-generational family cooperation - good thing. Being able to move back home when life throws you a curve ball - good thing. Living with your parent when you're all grown up - good opportunity to practise getting along :/

So I thought that I'd write a bit about the experience of trying to "help out" with the garden around my (mom's) house. Just to give you a hint of our differing garden philosophies: I am happy to use fertilize with fresh urine when appropriate, she keeps miracle-gro under the kitchen sink. If anybody has ideas or suggestions, please share! 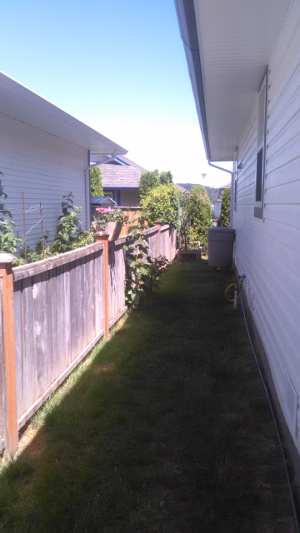 Genevieve Higgs
pollinator
Posts: 117
21
posted 5 years ago
So you will have noticed that there is a picture of one of those little between-the-houses spaces in the top post. I've always thought that its better off being a duplex with a larger side-garden on one side... but hey a little shady strip is what we've got.

The fun - two raspberry canes- volunteer spread from the neighbor's yard have been allowed to exist - as long as they don't get in the way of the lawn mower. Which means they are tied to the fence pretty tightly. But what I have been wondering is, what would happen if I encouraged these guys to spread out all the way down the fence? They obviously want to live there. I could patiently spread the canes out a little bit more each year. Or I could go get a bunch of canes from a nursery and sneak them in there - "happy valentines day! I planted 7 raspberry canes along the fence just because"

Does anyone know if it's worth getting different varieties?

Removing the grass is out, but subtly pulling out and piling up a little bit of grass around each stem to make a mini-mulched zone hasn't been noticed yet. We have slugs, should I be leaving a space between the grass mulch and the stem or should it be snugged up tight?

Last question: There seem to be lots of bees around, happy to sip on the raspberry flower bouquet. Is there anything that I could plant in the fence-perched hanging basket (there could be a few more next year) that would make the bees happy?

There is a common area beside the road way. Its dry and sunny. The landscaper who is paid to maintain it by the strata is quite easy-going. I was thinking of propagating some rosemary and lavender into the empty spot... maybe from cuttings? They both grow big around here. Rosemary is available from the back deck herb garden, and lavender is all over the area.

Are there any other decorative herbs that fit the same hot/dry climate niche? There are quite a few nooks around the California lilacs that would not get anybody in trouble with the strata if tastefully filled
guerillarosemary.jpg 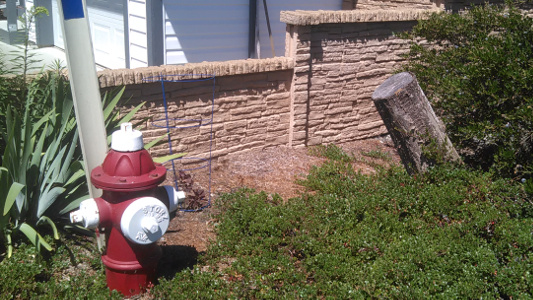 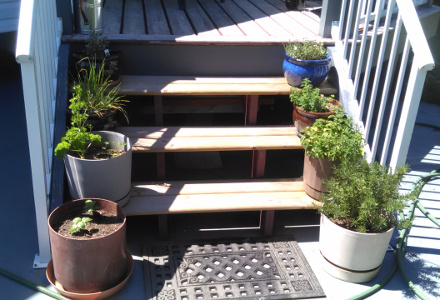 posted 5 years ago
With lavender and thyme propagating by division is super quick and easy. I got my lavender from a huge overgrown bush on public property. All I did was stick a shovel down into the stem area and get one big shovel full of roots with a few stems. It works well, replanting is as simple as just popping the shovel full in a new hole.