Rick Frey
Posts: 45
Location: Oakland, CA
2
posted 5 years ago
Partly because I love jacuzzis and my gas water heater broke, partly because I've been having fun playing around with rmh designs and variations and partly because I saw something like this on youtube, I started playing around with the idea of running a full size core for a rocket mass heater, except instead of putting the barrel on the top to redirect the heat, I put a radiator on top of the barrel and run my jacuzzi water through the radiator to heat it up.

My rocket heater is heavy fire brick, 6" design, my riser is a 1/4" steel tube, 24" tall with 3" of 8:1 perlite/clay insulating it (encased in a 12" duct). I ran the heater for a while before setting the radiator on top, it drew great, heated up fast, and with very little wood, it was pumping out extreme heat. I let things cool down and set the radiator on top. The radiator is just bigger than the size of the barrel, so it fits on snugly and there's about a 4" gap between the top of the riser and the radiator. I ran water through it for a while to make sure everything was good, then started my fire. The barrel is seated on top of the heater core, I've got a bunch of sand in the bottom of it so it's air tight-ish at the bottom.

As it turns out, my efficiency is not what I was hoping for. I've burned probably 8-10 lbs of wood, and I'm still under 90 degrees (that is a lot of heat movement, after 2 hours it had hit mid 80's). The air leaving the radiator is the temperature of the water, every bit of heat is getting sucked out of the air it seems like. It's a new, aluminum radiator and a 5 gallon/minute pump so the water is moving reasonably quickly through it.

So, any thoughts/ideas on how to speed this system up or is it operating at about the exact capacity it's capable of? I'm mostly burning 2x4 scrap, old pallet pieces and small tree branches. The barrel is hot, around 180 degrees near the top, but since the riser is open at the top, I would think most of the heat is going straight up through the radiator and mixing with a bit of barrel air. I wouldn't think I'm losing much heat to the barrel. The core is obviously warm and sucked a lot of heat to heat those fire bricks. I put one layer of red brick around the core with an air gap as a small bit of insulation, but maybe I'm losing some/significant heat through the core? Most of the core is under the barrel, it's only 6" or so of the fire tunnel that is outside of the barrel.

Anyhow, it's a fun project, fun to get to try out a fire brick design, fun to pour a riser and test that out, but I'd actually like to get to soak in my hot tub, so if there's anyway to speed up the system, I'm all ears - Rick 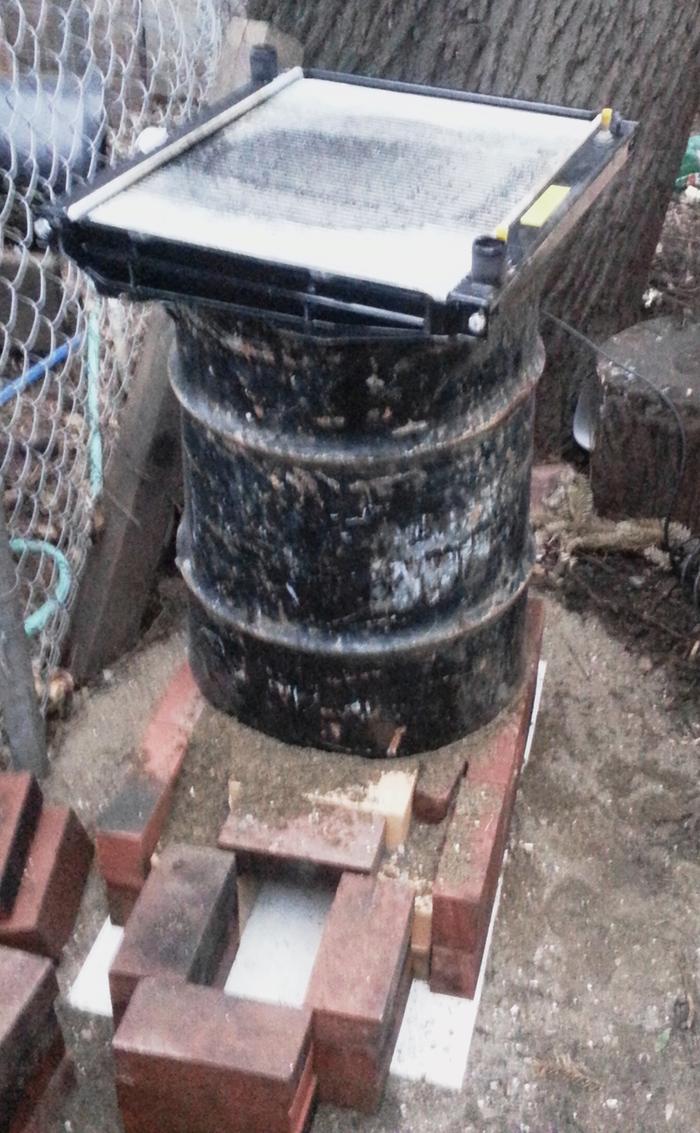 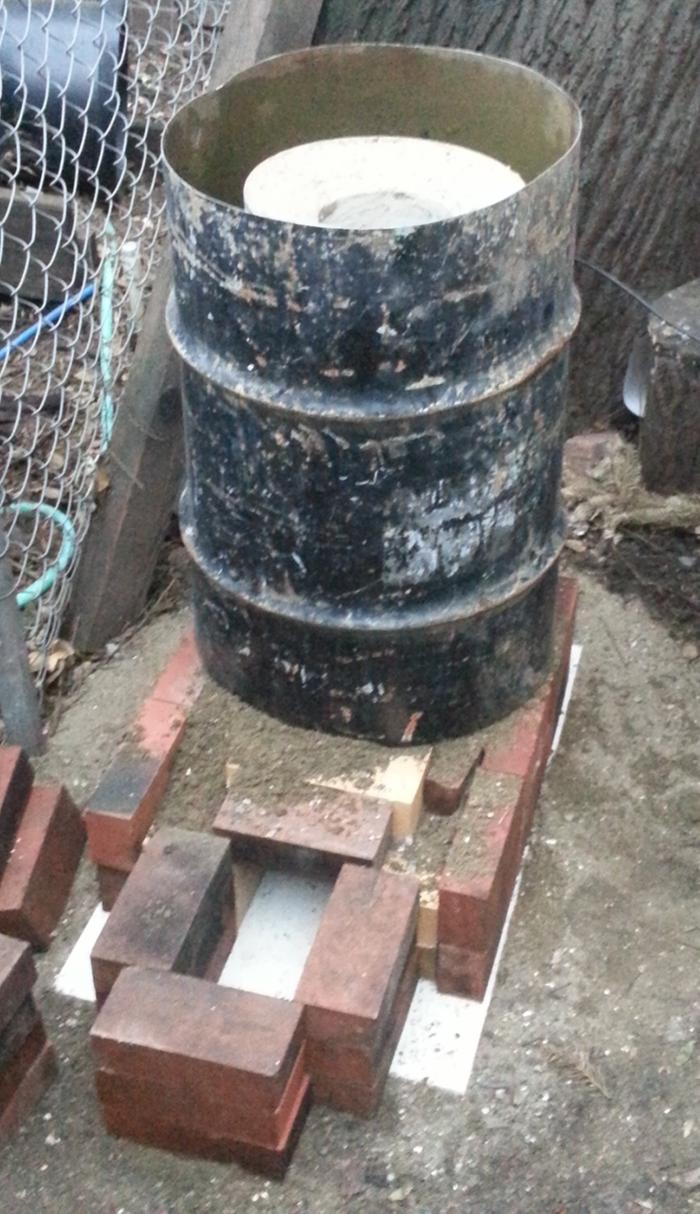 posted 5 years ago
It looks like the spacing between your tower top and the top of the barrel is greater than 2", could that affect it? If it is greater than maybe the turbulence etc is not enough to generate as much heat? Not an expert, just a thought.
Alan Lamborn
Posts: 22
Location: Iowa (Zone 4-5)
posted 5 years ago
Based on the two pictures I have a couple of assumptions for my opinions which may be completely wrong. Is the barrel topless and the heat riser exhausting straight up through the radiator? I didn't see an exhaust route behind the barrel like a horizontal run or chimney so I'm going to run with that.

With those assumptions the space between the top of the riser and the radiator may be too small. Let me explain. The bulk of the combustion should be done by the top of the riser so more turbulence isn't needed at this point. But we have a column of heat that is aimed at the center of your radiator. To borrow from the 80/20 rule; 80% of the heat is hitting 20% of the radiator. The barrel is a good stable platform for the radiator, but is not performing the normal function of a barrel in the RMH. That had me confused for bit.

To improve this, one would want to spread out the blast of heat from the riser so it hits a greater portion of the radiator. Kind of like the diffusers that can be used on gas stoves. That is currently a small gap to spread the heat out that quickly, so adding some type of shroud and moving the radiator up and further from the riser while also adding something to disperse the heat column may be a big help to the heat transfer. Since the barrel is only in a supporting role, the exterior could be lightly insulated to reduce the heat loss. Unless of course you have a use for the radiant heat off of it.

WARNING: Be mindful of "BOOM-Squish" when using intense heat and water systems. A failure in your circulation system or low water levels can be catastrophic.

Rick Frey
Posts: 45
Location: Oakland, CA
2
posted 5 years ago
You're right on with your assumptions, the barrel serves mostly as structure and to insulate (to a degree) the air that the exhaust mixes with before it hits the radiator.

But, unless there's some inefficiency in the radiator not being able to handle extreme heat, how much does it matter whether the heat from the riser mostly hits a small area vs gets distributed over a larger area? If the water couldn't absorb the heat quickly enough, that would make sense, but for the first two hours of the fire, the air coming out the top of the radiator is cold. The air flowing past through the radiator only warms up as the water temp in the jacuzzi warms up.

It would be a pretty easy thing to try, but since the air leaving the radiator feels cold, it didn't seem like a heat transfer problem. Or maybe there's still a chunk more heat left in that air and with better diffusion I could capture it as well? Or maybe better diffusion would heat the surrounding air better and the net heat through the radiator would be better? But then, would't I be losing more heat through the barrel if the air is mixing and diffusing more?
Alan Lamborn
Posts: 22
Location: Iowa (Zone 4-5)
posted 5 years ago
I feel silly now, you've clearly put more thought into it than I have. You're right on with the air temperature out of the radiator. That sounds like a clear indicator that it is pulling all available heat from the riser exhaust. Plus not much is mixing with the barrel air since it is a closed system.

So at the risk of still not being helpful, I'll throw out another spot to look for improvement. If we are currently pulling nearly all the heat out of the exhaust, we need to start with more heat in the exhaust.(boom-squish disclaimer) I'll admit when I first replied to this posting I hadn't seen your cast core picture. So it looks like you are further along the experience path than I am. I need to quite playing with my loose stacked firebrick and riser and finish a bench out!
AL

Rick Frey
Posts: 45
Location: Oakland, CA
2
posted 5 years ago
Having come from a statistics background, I wanted to write the multi-variable equation for heat through the radiator. You start with wood burned, there'd be some kind of efficiency for the heat of the burn and the completeness of the burn, then there would be the potential sources for heat loss.

Probably add in a factor for some heat loss from the jacuzzi while the water is heating up, a bit of heat lost through the pipes running from the radiator to the jacuzzi, anything else?

For this project, I'm using a dry fit fire brick core (surrounded by one layer of red brick and sand on top) and a 6" x 24" steel tube riser with 3" of 10-1 perlite insulation around it. Not a perfect system, but not bad. There's no smoke to speak of coming through the radiator, I might try doing a burn again with the radiator off to get a temp reading on the top of the riser and maybe I'll put that fire brick for spreading out the heat on top of the riser and take a heat reading off that after 15 mins of burning or so.

One other factor, and maybe this is what you were referring to, I haven't done a careful sample of pre-weighed wood that I know is very dry and is fairly dense. A lot of the wood I'm burning is fallen tree branches, and many of those are 3" diameter pieces but almost totally hollow. Maybe I'm not burning as much wood as I think I am?

I had an old pallet I burned a few days ago and I got the highest temps I've had in a while. I've got another pallet just like the one I burned, maybe I'll try using that wood and see what difference that makes ...
Dave Lot
Posts: 152
7
posted 5 years ago

Rick Frey wrote:Partly because I love jacuzzis and my gas water heater broke, partly because I've been having fun playing around with rmh designs and variations and partly because I saw something like this on youtube, I started playing around with the idea of running a full size core for a rocket mass heater, except instead of putting the barrel on the top to redirect the heat, I put a radiator on top of the barrel and run my jacuzzi water through the radiator to heat it up.

Anyhow, it's a fun project, fun to get to try out a fire brick design, fun to pour a riser and test that out, but I'd actually like to get to soak in my hot tub, so if there's anyway to speed up the system, I'm all ears - Rick

Have a look at my thread : 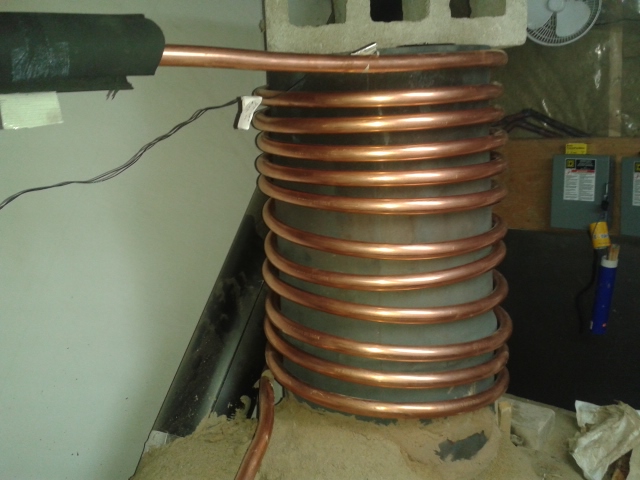 I'm trying to "blast heat" my jacuzzi water, to see how many btus I can deliver to water as quickly as possible. It might turn out that rocket mass heaters just aren't blast heaters. My natural gas jacuzzi heater is rated at 150,000 btu's hr and I know I'll never get that kind of output from a rmh (use a 16" barrel as the riser, a 55 gallon barrel to hold the insulation ...), so maybe I need to rethink the problem. Instead of trying to do it quickly, I've got an old 50 gallon hot water heater, maybe I use my rmh to heat water up to 140 degrees or so, and store it in the hot water heater just as an insulated tank. Then, when I want to jacuzzi, pump the hot water into the jacuzzi, and see if I can get it hot enough?

Keep in mind, that this is from freezing - solid ice chunks - ice water up too 140 F.

Good luck, and keep us updated.