Kevin MacBearach
Posts: 213
Location: Beavercreek, Oregon
2
posted 5 years ago
The city was out in the neighborhood today trimming and chipping branches over the power lines. I asked them if they wouldn't mind dumping their truckload of woodchips on my property, and they were fine with that! So now I have a huge amount of chipped Douglas fir, cherry, and maple. I've never had a pile this big to play with. I do have large amounts of manure from my two dairy cows, 40 chickens and a few rabbits to add to this pile.

Knowing the make-up of the wood chips and the manures I have, I'm interested in any ideas from anyone on the various options (besides just making one giant steaming pile) relating to farming and/or permaculture.
P1190021.JPG 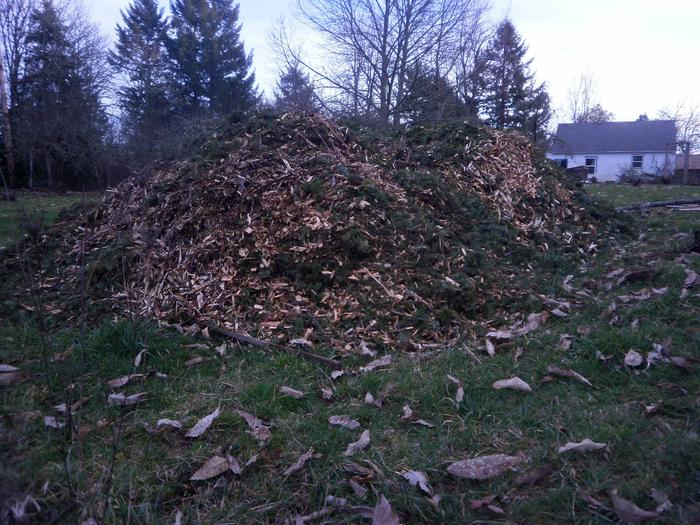 Tom OHern
Posts: 236
Location: Seattle, WA
12
posted 5 years ago
If I were you, I wouldn't compost it. That stuff is far more valuable as mulch than anything else.
Peter Ellis
Posts: 1444
Location: Fennville MI
43
posted 5 years ago
But don't let it just sit around too long. A pile like that can spontaneously combust.
Mike Hamilton
Posts: 82
Location: north end of the Keweenaw Mi.
posted 5 years ago
what we did with our 2 piles [the chips were too big ]Soooooooo

the chips went for ground cover,walking path's and erosion control. the fines went to the compost bin [8'X8'] mixed in layers of browns and household left overs

Kevin MacBearach
Posts: 213
Location: Beavercreek, Oregon
2
posted 5 years ago
Yes, mulch would be nice but I really want to get a compost project going. Actually it's a chicken/compost project.

I think this pile would be best composted because it has a good amount of fir needles in it so it might not be good around garden crops. I'm hoping it will compost with all that Douglas fir so I'll be using lots and lots of fresh cow, pig, rabbit, ad chicken manure mixed with it. I want to do the Berkley method but I don't have much in the way of green plant material, being it's the middle of winter now.

I'm going to do 50/50 animal manures and brown material. I hope that works.

Winecaps-2014-06-02.jpg
Kevin MacBearach
Posts: 213
Location: Beavercreek, Oregon
2
posted 5 years ago
Oh wow! That's a whole new side of farming to me. Looks very interesting. Is that solid mulch? Is it all coniferous?

posted 5 years ago
I like the idea of running chickens on it. Even if it is just woodchips with no other organic material there are a lot of critters for them to eat as they stir things up and the pile starts to break down. Slime molds showed up in my woodchips, don't know if the chickens ate them or not but it seems like they did. Not only will it be a good place for chickens and create a lot of food for them but the leftovers of the pile will be great fertility.
Maurice van der Molen
Posts: 12
Location: Amsterdam and France
3
posted 5 years ago

Kevin MacBearach wrote:Oh wow! That's a whole new side of farming to me. Looks very interesting. Is that solid mulch? Is it all coniferous?

It's a mixture of spruce, pine and fir, mostly shredded spruce christmastrees (only clean ones without sprays) and there were probably some chips from broad-leaved trees already on the spot. Some additonal fresh straw will also do, I usually put on a layer of wet fresh straw first. The mycelium also needs some soil microbia in order to grow... mixing some compost will do.
The Wine caps (also known as King stropharia, Garden giant, Godzilla Mushroom) are usually not difficult to grow. And once you have a settled patch, you can spread it around as much as you like.
See also: Wood chips and King Stropharia >> on the forum.

Kevin MacBearach
Posts: 213
Location: Beavercreek, Oregon
2
posted 5 years ago
When you say 'spread it around," do you mean to the garden, or pasture?

Posts: 3593
Location: woodland, washington
143
posted 5 years ago
I used a pile that I would guess was about twice that big to heat water. I didn't add any manure to it, just water. coiled some 1/2" poly pipe through it and stomped it down real well with each new layer. heated the water up to 160º Fahrenheit for over a year.

I just used it to heat bathwater, but I don't think that was the highest use. because it was producing heat constantly, I think a better use would have been to heat a structure by circulating water through a radiator inside, but I didn't think of that while I was building it. as it was, it made a pretty great outdoor bath. and once the wood chips had broken down enough that the pile wasn't heating anymore, it was still a great heap of mulch to use anywhere we needed it.

that was a mix of alder, Doug-fir, red cedar, maple, and a few others I couldn't identify. maybe a third to a half of it was cedar, though, so I was surprised that it heated up so well.


I'll second the wine caps recommendation, too. easiest mushroom I've ever grown. bees like the mycelium, too, and it's great for the dirt. only problem I have with it is the violent vomiting that follows when I eat it. apart from my sister, I've never met anyone else who had a bad reaction to it, though, so don't let that dissuade you.

Kevin MacBearach wrote:When you say 'spread it around," do you mean to the garden, or pasture?

I mean you can use your Original patch to innoculate other woodchip patches or even try innoculating places where there is a lot of woody (carbon rich) mulch such as your garden maybe.
You can also add fresh straw to your patch each year to keep it going.
But if you can get more woodchips you can grow a good cash crop of Wine cap mushrooms while at the same time you're composting the chips in your garden.
steve bossie
Posts: 609
Location: Northern Maine, USA (zone 3b-4a)
52
posted 3 years ago
i do the same thing. i have k. stropharia and elm oysters coming up around all my trees and bushes! i use pure hardwood chips from a firewood business nearby. was told they won't grow on conifer chips. is there a lot of conifer in your chips? we have a lot of spruce chips available from timber production but i didn't use it as i didn't think it would work for them.