Questions about cob bench used as platform for aquaponics setup

Rick Frey
Posts: 45
Location: Oakland, CA
2
posted 6 years ago
I'm getting ready to build a rmh to use in a greenhouse, ideally as the platform for an aquaponics set up. The cob platform would be roughly 4' wide by 8' long by 18" tall. What I'd like to do is put a liner we use in aquaponics directly onto the cob platform with a bit of wood framing to hold it up. The liner would be 4' x 8' x 1' tall and would be filled with water (roughly 32cf of water, right around 2000lbs spread over the 4' x 8' platform.

Could a cob platform support that weight? And, can I count on even enough heat distribution so I won't melt the liner or light the wood support framing on fire?

My basic plan for the platform would be to build it on the ground, a 3" layer of sand for insulation, then 3" of cob, 6" ducting (4 runs through the platform) with cob all around it and 6" of cob on top. I'd like it to be warm on top (70-90 degrees) but never so hot it would melt/damage the liner. I'd use a wood frame to hold it all in during the forming, but I'd think to take off the wood frame after (there will probably only be 4" of cob between the side of the platform and the edge of the outside duct on both sides).

No matter how confident I am, before I put the liner on, I'll run a bunch of tests to make sure it's all working according to plan. Worst case scenario I could add a layer of bricks on top of the platform or put a layer or two of some cementaceous board to spread out the heat a bit better, but I'd like to make the cob portion as well designed as possible to get the final height to a desired level. If I need less cob, I can fill the bottom, if I need more on top to ensure no burning and even heat, I can dig down or raise the height of my bed.

Last question, in building a platform like this, I'm estimating needing around 40 cf of cob. 4' x 8' x 2' is 64 cf, - 25 cf for the duct leaves 40 cf. I could easily use some hunks of urbanite, old bricks, old cement pavers, anything to help take up space. But I'm a bit nervous about having to come up with a yard or so of cob. Is that an awful task or not that bad?

Thanks for any input - Rick
Glenn Herbert
gardener

Posts: 3479
Location: Upstate NY, zone 5
210
2
posted 6 years ago
A yard of cob is a lot of work, no question. If you have access to urbanite or rocks to fill the inner core with, that will be great. It will probably be denser and hold more heat per cubic foot than cob. Just build a "lasagna" as some have put it, with layers of rock packed with enough cob to leave no voids.

The cob platform could easily support the weight you describe, as long as you ensure the water doesn't leak into it. 6" ducts with 4-6" of cob on top should give no significant hot spots to damage your liner, and if the wood frame is at the outer edges it will be in no danger. The water will quickly absorb and distribute any minor hot spots.

Have you thought out the wood frame around the edges? 8' is a long span to hold against the weight of a pool, and it will try hard to spread the base of the wall. I would experiment with the frame you plan on the ground first (without external bracing on the bottom) to see how it works.
Rick Frey
Posts: 45
Location: Oakland, CA
2
posted 6 years ago
So my original plan was to build a wood base/frame for the platform (engineered sturdily enough to handle the weight of the cob and the water on top) but I started getting nervous about hot spots and burning the wood. It would be easier if I could build a smaller, thinner cob platform on a wood table. The original plan was OSB bottom and sides, layer of foam insulation, 3" of sand, 6" sheet metal ducts on top of the sand and sand surrounding everything. I planned on running a few tests to check the temperature of the top of the sand, and as needed, I could add cement board to distribute the heat or a layer of bricks for more mass and spacing if needed.

I found out/heard that sand won't work well as a heat storage material, too much insulation and I'll be likely to still have lots of heat exiting my duct even after close to 30'. A history buddy of mine who uses cinder blocks for everything was thinking of the roman baths and suggested using cinder blocks as both the fill material and the duct material (you'd line up the cinder blocks so the gaps made a channel and the exhaust gases would run in those channels (with some custom made something that did the u-turns at the end of a row of blocks). But it sounds like cinder blocks and most cement stuff can't quite handle that much heat.

So, I'm back to cob, but would really love to not have to come up with a yard of cob. If I'm just doing an inch or two of cob under the ducting, as much rock/urbanite fill as I can find along with cob to fill in cracks, around the ducting and then 4-6" on top, that should be fine? (i.e. no wood burning and no liner melting

That comes out roughly to half a yard of cob (assuming I can add in rock/urbanite as available).

Anything else that would work as an easy to make/find material for filling in around the ducts, catching the heat from the ducts and holding it/passing it to whatever rocks/urbanite I have in there?

Thanks for any thoughts
duct-layout.JPG 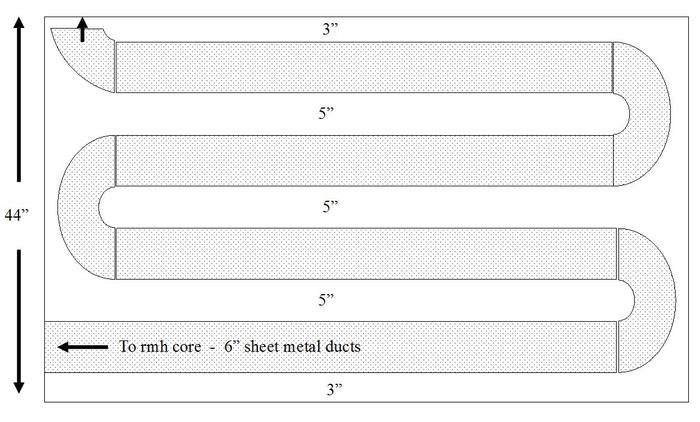 Posts: 3479
Location: Upstate NY, zone 5
210
2
posted 6 years ago
Actually, the great majority of the heat exchange ducting will be at a low enough temperature to not damage concrete block. You would need to use cob casing for the first several feet, then you could switch to block. There is the issue of the rough surfaces of block, so you would need to ensure enough larger cross section to give good airflow.
Using several cores in parallel might be a good option, as long as you can assess the relative flow in each and adjust for equal flow. It might even work to have a big cob manifold at one end, like a half-barrel bell, which feeds all of the block cores equally, then collect the gases in another manifold at the other end and go to the chimney. This would be a miniature version of the Roman hypocaust or the Korean ondol.

Trying to make any wood frame that holds up the whole system is not going to be practical. The weight would require such heavy framing that it could get expensive, and you need enough thickness of cob/mass surrounding the ducts and isolating heat from wood that you would end up with a taller platform than you want. Just insulate the ground and lay your masonry (with sand insulation at the bottom) from there. It might be most practical to use a steel cable or tie rod at the midpoint of the wood frame, set in the top inch of the cob and holding the sides from bowing. A 4' clear span for 2x4 framing is not unreasonable, as long as the joints are strong enough. Run the vertical framing down to the ground outside the cob mass and it should be good and sturdy.