Jeremy Watts
Posts: 19
2
posted 5 years ago
Joel Salatin always talks about raising chickens on table scraps alone, but I can't find any literature to back it up. It makes sense that they would have historically filled this "recycler" niche, back when grain was too expensive to feed to animals, and layer pellets haven't been invented. But the literature all seems to say that your chickens will be scraggly and unhealthy if not supplemented with grain. My thinking is that they would probably be healthy if they could forage in the compost pile and get worms and bugs too, but maybe just produce less eggs. I'm going for a zero input system. Just wanted to see if anyone had experience with this before I tried it.
Zach Muller
gardener

posted 5 years ago
It will depend on the breed to some degree since some are better at finding bugs and stuff. Will you have any areas for the chickens to go like paddocks? If that is the case then a lot of their diet can come from plants and bugs there. If they will be confined then as long as there are enough scraps it Will be ok.

Also here is a link to a thread about jeoff lawtons video on his chicken tractor which includes a lot of good information regarding kitchen scraps and chickens.
Dale Hodgins
Posts: 9002
Location: Victoria British Columbia-Canada
670
posted 5 years ago
We had many chickens when I was a kid. A few breeders were fed over winter. Many spring hatchlings survived and thrived until about October without ever being fed grain. They worked the barnyard, fields and ditches along the road. Neighbors grew corn and other grains. The chickens gleaned those fields after harvest. When the food ran out or snow came, they were slaughtered. All that we provided was scraps, a barn, pond and a dog that kept dogs and timber wolves away.

Eggs were sometimes collected. Very dark yolks and thick whites. Chicks hatched after July would not be very big at slaughter, so we tried to prevent nesting in summer.
neil mock
Posts: 67
1
posted 5 years ago

we have a group of ~20 hens and 1 roo that are in our compost area. it is more than just table scraps, we collect food waste from 3 restuarnts, and they get all the left overs from the vegie garden (~3 acres) harvest (damaged lettuce leaves, brocoli leaves, ect.....), and all the normal plant trimmings you get from the land. we typically dump compost 3 days a week, the days we do not dump compost, the chickens get a handfull of cracked corn.

the chickens are fat and healthy. they are mixed breed duel purpose birds, we usually get 8-10 eggs/day. which is lower than our production flocks, but so are the inputs. and we get compost.
IMG_4099.JPG 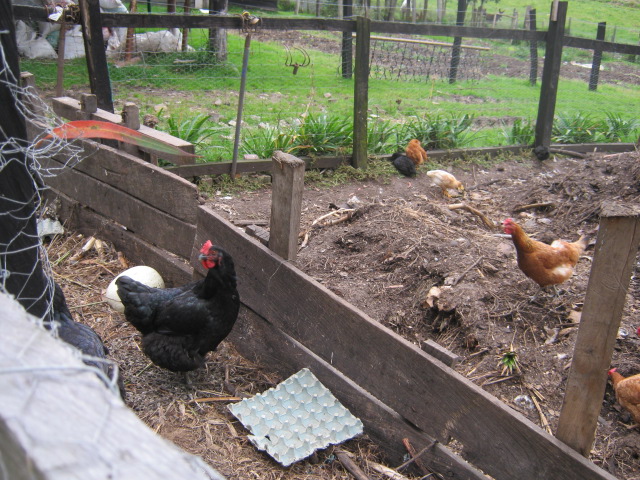 Justin Rhodes
Posts: 77
18
posted 5 years ago
Currently I only feed compost and kitchen scraps. I've been doing that since I saw Geoff Lawton's video "Chicken Tractor on Steroids". Accept I do a rotation inside a run. Like, Neil Mock I've experienced a drop in egg production up to 50% but I have NO feed costs and I get a square meter of compost each week! The chickens seem happy and healthy.

We use our whole organic kitchen scraps, but also pic up the bags of discarded produce from the local health food store. I can't imagine that what I'm feeding isn't MUCH healthier than stale purchased grain.

I believe if a chicken has a choice it would eat 70% protein, 20% forage and 10% grain. I am working to increase winter protein consumption through sprouting some grains (increases it's protein by 20%, growing red worms and feeding them more milk from our family cow).
2014-12-29-15.26.50.jpg
2014-12-29-15.23.32.jpg
2014-12-29-15.27.26.jpg
Tom OHern
Posts: 236
Location: Seattle, WA
12
posted 5 years ago
Justin, I've heard a few people claim that sprouted seeds contain more protein, but my understanding was that the amount of protein is not actually increased, but just that the starches are consumed by the growing sprout, so the protein to starch ratio left in the seed is higher. This thinking seems to be confirmed by several other sources on sprouting seeds and also including my homebrewing experience, where grains are malted (sprouted before being roasted), to convert the starches to sugars, not proteins.

Do you (or anyone else for that matter) have any info on the starches actually being converted to protein, so that the amount of protein in the seed actually increases?

Justin Rhodes
Posts: 77
18
posted 5 years ago
Tom, I'm not 100% I understand your question. But from what I understand when a seed begins to sprout it breaks down the brown proteins into amino acids (which are proteins that are easier to digest). It does vary from seed to seed, but in some cases, increase the protein levels up to 35%. Here's a seemingly scientific article (and web site) with more than I want to know about sprouting:

posted 5 years ago
From the article


The total content per Mung bean rose on the average from 25% in dry seed to 37% in the (dried) sprout.

I can't see that it's possible for the actual amount of protein to increase, but, like Tom suggested, I think what has happened is that most of the carbohydrate has burned off to fuel the sprouting process, so the percentage of protein is higher.

Very roughly, protein would start off as 25% and carbs would be around 60% with 15% of summat else.

But if half the carbs burned off, then the same amount of protein would now form 36% of what was left, if the water content is ignored.

I have to watch my carb intake, so sprouting my beans is a good way to drop the carbs.

R Scott
pollinator
Posts: 3650
Location: Kansas Zone 6a
117
posted 5 years ago
Sprouting makes more nutrients AVAILABLE in a digestible form. Once they are green, they are adding total dry mass as well. Sprouting is a great way to stretch grain and improve nutrition for animals or people. All it takes is water and time.

Keep in mind that old farm house kitchens ran differently. You didn't buy cleaned detopped veggies from the store, you brought them up from the root cellar or clamp with all the dirt and most the tops still on. You had probably half the potatoes go bad, plus peels almost every day. You had apples go bad or need a lot more trimming. They had a lot more to feed the chickens. My grandma probably had at least a gallon of scraps per person she was feeding per day.

Grandpa's idea of feeding sprouts was to cut a strip of sod from somewhere that needed dirt removed and feed it to the chicks locked in the brooder. They tore it up, not a root or worm left.