rocket mass heater with glass to see the flame

does somebody know of Rocket Mass Heaters with a glass see-through, that allows to see the flame ?
I find it very cool to be able to see the red and yellow colors of the fire.

Posts: 3372
Location: Southern alps, on the French side of the french /italian border 5000ft elevation
170
posted 6 years ago
https://permies.com/t/40007/rocket-stoves/Results-batch-box-thingy-Innovators

posted 6 years ago
Louis; Hang a grocery store convex mirror over your feed tube and you can watch your flames from anyplace in the room.

Louis Romain
Posts: 52
4
posted 6 years ago
@thomas hahaha nice one ! You know I was thinking more about something to directly see the combustion !

@satamax ok thanks, this is great !! I am not sure I really understand what is the strategy to keep the glass cleaning itself.... Do you think you can sum it up here ?
Ramzez Imaginative
Posts: 18
Location: Valcourt, Quebec, Canada
posted 6 years ago 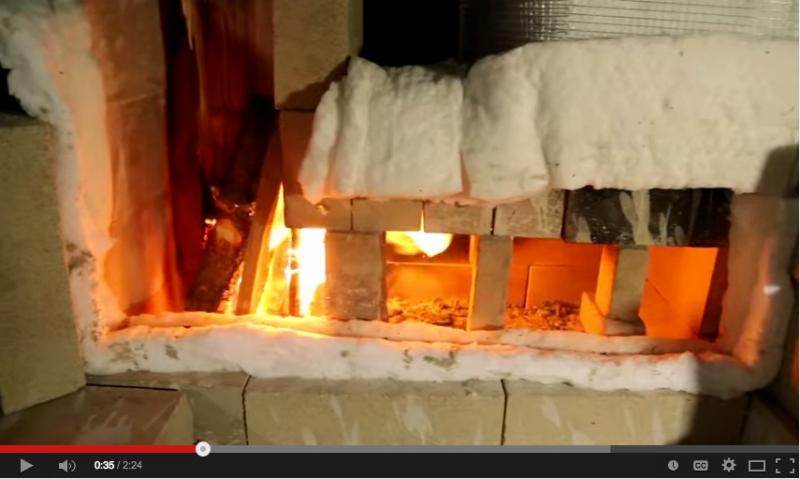 Louis Romain
Posts: 52
4
posted 6 years ago
Yeah I think it's for educational purpose !

Thanks anyway
Erik Weaver
Posts: 219
Location: S.W. Missouri, Zone 6B
8
posted 6 years ago
Yes, that was only for demo.

Most of us like fire! Air is a good insulator. I've wondered how many layers of glass/air/glass one would need to get the insulation value high enough to allow the temps drop not to be too bad?

I too would like more info on the way to build to keep the glass largely self-cleaning. I've run across this before, but have not paid much attention to it so far.

What if one made the outside face of the feed tube -right in front of where you stand to feed in the wood- of glass? Of all the places in the fire box, as I recall, the feed tube is the one place where reducing the heat may be a benefit, so as to discourage it beginning to act like a chimney.
Sam Barber
Posts: 641
Location: Missoula Mt
43
posted 6 years ago
Here at wheaton labs we have a few with glass in them. Two of them are batch boxes and the other one is a pebble style. They are pretty nifty.

Leland Lewis
Posts: 2
posted 6 years ago
I looked at the info provided, but didn't see anything about the type of glass. I assume one would want tempered glass made for heat, so I was wondering about the glass door from a scrapped toaster oven since it is made for temps of at least 450F.

Putting the glass beside the feed chamber sounds like a good idea; I have found it to be the coolest area of burn and still have a good view of a flame.

As for double pane, wouldn't you need an insulator gas or a vacuum to eliminate heat transfer and pressure buildup from heating the air in the void.

I've only ever seen just a single pane of ceramic glass is used in these types of applications. My guess is that it is the easiest way to keep the glass below its melting point, cooling by both passing a lot of heat, and by convection.

Sam Barber
Posts: 641
Location: Missoula Mt
43
posted 6 years ago
the few pieces we have are Neoceram glass it is not cheap another option would be to see if you can find woodstove doors or something along those lines to scavange glass from them.

posted 3 years ago
Neo Ceram / ceramic glass is the stuff that holds up best.
It can sometimes be found in stove doors, or the tops of "glass" topped cooking stoves (electric kitchen stoves).

We've had mixed results with Pyrex or similar tempered glass.  Some people use it for lids, in areas a bit back from the worst heat of the fire.  Some people have had Pyrex in the fire walls that shattered rather spectactularly within a few minutes of lighting their first fire.

For those who care how the heater works, not just how it looks:

Be aware that glass is generally not as good an insulator as the more typical brick-and-perlite or brick-and-insulation we use to build the fire box.
Glass inserts may cause poorer performance or a dirty burn.
Introducing a thin glass-walled section to the firebox may also introduce cracks / stress / air leaks, and will require a higher level of skill than typical RMH construction.
(doubling up to two or three layers of glass could reduce the heat shock and potential heat loss, but only adds to the skill needed to ensure heat-resistant, airtight, expansion-jointed construction).

The original developer, Ianto Evans, consistently said, "If you want to watch a fire TV, light a candle."
We've had some folks build a small Rumford fireplace in next to their RMH, for occasional "fire TV" viewing pleasure, while still being able to shut down the fireplace shutoff damper and run the heating on the more efficient RMH.

posted 3 years ago
Here's some of Matt's videos:
fire-aquarium: