posted 1 year ago
This is a particular favourite of ours discovered when living on Mallorca.

Frito Mallorquín is a traditional dish  made from heart, lung, liver and kidney, usually of lamb but can be from any other animal - goat is particularly good.  Small cubes of the meats to be used, potatoes, red peppers, onions and bulb fennel are fried in olive oil with salt, pepper, fresh fennel, bay leaf and pepper, but a little chilli makes it spectacular.  It neesds to be eaten piping hot so heat bowls before serving, serve with bread and aiollí.  This is probably arabic in origin and I have never seen it 'up North'. The Spanish make a great deal from offal and it is readily available in butchers, but we never find chicken with their giblets.  Odd. 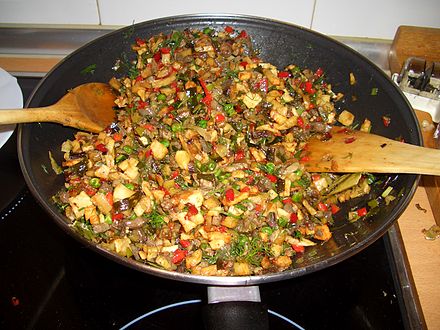 posted 1 year ago
The prices of meat these days is pretty crazy! I also do a lot of cheap cuts/stretching.

As background- I'm the daughter of a butcher who learned to cut meat prior to refrigeration and who worked at everything from local butcher shops, to small abattoirs, to large packing houses, to grocery chains. Dad's very incredulous sometimes by what is "cheap" now, as he says some of the best, most flavourful cuts are the cheapest! His motto is "there's no bad meat, only bad cooks".

Dad makes a traditional European liver pate for Christmas every year - very, very cheap, very, very good. He has the local store order him in pork fat and (i think pork) liver, and runs them through a meat grinder 3-5 times to mix them, then mixes in seasonings and cream. Makes little loaf pans and cooks them in a pan filled with water. Serve with crackers or on toast with cucumber...  Yum!!! Extras are given away to relatives and/or frozen.

For cheap/off cuts - sausages are the ultimate solution, and are surprisingly easy to make. I grew up helping Dad at a church, where we made thousands of pounds of traditional smoked sausages every month, as a fundraiser and for 1000 people plus dinners to support the church. I have fond memories of mixing (by hand!) the ground meat, rice, and seasonings together, and then watching as they poured in the blood. My favourite was the grey sausage (liver), but the black sausage (blood sausage), and kolbassa were also really good. And people went wild for the head cheese (not I!) made of all the scraps of the pig and it's head not commonly used, like the head and hoof meat, tongue, heart, etc, cooked to produce gelatin with lots of spices then stuffed in a casing and smoked. In retrospect, I probably would have liked it better if my father hadn't said they put the brain in there (I think he was lying).

When I go to the grocery store I usually have my dad's voice in my head (and sometimes on my phone if I see a good deal and am not sure how to use the meat). This is what I look for:

- Clearance beef -it's the best tasting, and the dark colour is good! - but never buy clearance poultry/pork (he doesn't trust it).
- Large chunks I can cut into smaller chunks - most very tough beef can be improved by cutting it against the grain into fine strips, then either very quickly searing it in butter, or slow cooking. IMHO, cutting meat into tiny pieces in soups/stews etc improves the flavour of the stew, and allows you to stretch the meat further.
- Cheap steaks - these can be tenderized in a number of ways : Marinating it overnight or for a few days,  using chemical/enzyme means (pineapple juice or tomato or lemon juice). If you use pineapple juice, keep it short, because the enzyme is actually eating away the connective tissue and it's easy to overdo it. I cook a lot of "meat in tomato sauce" kinds of meals.  Dad also has a mechanical meat tenderizer, which works well but is a pain to clean.
- Cuts of beef/pork with fat marbled throughout - these are the most flavourful cuts, and don't get dry when cooked as a roast.
- With a decent boning knife, it's a matter of minutes to debone chicken thighs/chicken breasts, and usually saves you a lot over buying the pre deboned stuff. It's a titch longer (10 min? I'm slow) but deboning a chicken is also very easy to do. I personally prefer thighs over breast because of flavour, so that helps. If I'm feeding a crowd, I usually buy 3-5 whole chickens and debone them, then make stew.
- personally (sorry Americans!) I've started to avoid American pork. There is a lot of it in our stores, and it's usually the stuff that goes on sale, and I always think it tastes "off". I do buy Canadian pork when it goes on sale.
- Lots of the big roasts are best portioned off into pieces - I'll buy a $20 chunk of meat, then portion it out for the freezer into stirfry strips + chops+ roasts.
- I seldom eat offal (usually liver or chicken hearts if I do). I want to try tongue and oxtail, as both parents give rave reviews, but don't see them in stores.
- Lard - If I cook with really fatty pork, I often skim the flavoured fat from the top and keep it in the fridge and use it as a sandwich spread, maybe with some finely diced onion or garlic. Yum!!!
- This is common knowledge, but when using ground meat for meatloaf/meatballs/hamburgers, etc, I usually stretch it with corn meal and/or grated carrots to make the meat go farther and also catch the fat and make a better tasting thing.

Oh - and I second the suggestion to look at an instant pot for fast dinners with cheap meat cuts.
Skandi Rogers
pollinator
Posts: 1536
Location: Denmark 57N
426
I like...

posted 1 year ago
I hate reading these threads :( I used to cook cheap meat back in the UK but here in Denmark it doesn't exist. and I really mean that, and I miss slowcooked meat! One thing I say that people should check is the amount of the product you will throw away, chicken thighs is a good example here, the cheapest are thighs with backbone but they are 50% bone, so the ticket price is not a fair comparison

the prices I pay for various pork cuts per kg, these are offer prices but not amazing offer prices (10DKK is about $1.5)

As you can clearly see the best cuts from the pig are the cheapest. with the nasty cuts being in some cases over triple the price.

Beef is not quite the same, but still shows really poor cuts being massively marked up.

tail and ossobucco are a good 50%+ bone and cost an absolute fortune.

Chicken is even worse,

The only way to "save" here on meat is to keep an eye out on the offers, and then buy bulk, quite often they sell the entire loin of beef 3-4kg for 200DKK it's the only way we get beef, it's almost all pork and chicken just due to the price.

posted 1 year ago
Skandi - if it helps, prices are similarly outrageous here in Canada too. We keep joking there ought to be a security guard for the meat display!!!

Those look pretty similar to what you listed.

Oh - wait, there's a (really) good sale on pork (but the weird tasting American pork) on right now ( I haven't seen a meat price below 2.50/lb in months)... 1.77/lb, 3.90/kg, ~20 DKK. All the other pork is 3.99/lb (~45 DKK) and up. Still not going to buy it though!
Lana Weldon
Posts: 163
8
posted 1 year ago
Actually, "older" animals can also be full of flavour and tasty, you just need to slow cook for many hours. For instance, slow-braise older goat for stews, ragus, curries.
Because it has so little fat, compared to other animal, goat can become tough if cooked at high temperatures. So, slow cooking with low, moist heat such as with stews and braises are best, while marinating the meat before is also good.
Michael Cox
pollinator
Posts: 2821
Location: Kent, UK - Zone 8
370
I like...

posted 1 year ago
The dining hall at the school I teach at did an absolutely amazing beef brisket the other day. Absolutely succulent, melting off the fork.

10 hours cooking time. I have petitioned for them to do it again :)

posted 1 year ago
In my admittedly highly biased BBQ opinion low & slow is definitely the best way to cook brisket. TX is famous for that! I can't speak for cooking it in an oven though. Cooked about 16 hours over oak &/or mesquite coals is how it's usually done there. It develops a crusty "bark" on the outside with a pink smoke ring layer under that. I brine them in salty water overnight before cooking but some people don't. Cook with fat side up for at least the first few hours. Sliced across the grain. YUM!!!