posted 8 years ago
Glad you liked the pictures. Might I ask what prompted the curiosity? You mentioned a car breaking down but not being a sleeping option, which made me a bit more curious. As to construction, they are usually pretty basic. A ridgepole of some sort with sticks laid across it on either side, then a bunch of debris piled on and mashed down a bit, then a layer of sticks to help keep it that way, followed by further layers of debris and sticks to create a water shed and to hold everything in place. Lastly filling it up with no less than four feet of dry and relatively stick-free debris to insulate the ground and around you somewhat. I find that having a pile just outside of the shelter can be helpful if it isn't raining since the insulation can get a bit mashed down from a night of rolling on it.

While not required, a blanket can be a great godsend in a debris shelter since you can pile up the inner debris, lay a folded blanket in, then cover it the rest of the way and have an easy way in and out without ending up with thin spots or getting leaves all pushed to the back or pulled out in the morning. Then again, if it is going to be more than a couple days, yesterday's upper inner debris will be tomorrows increase of lower debris.

posted 8 years ago
I've built and slept in debris huts - warm, comfortable and so quiet compared to a tent. Everyone else was up with the birds and the sun, I was still dozing at 8am

You need to think of a debris hut as a sleeping bag with structure - if you want to be warm, you need it as snug and tight to the skin as possible. Then you can fill the space with packed leaves to make it even more insulative.

If you want to build a larger shelter, with more open space for more people you probably want to look at different techniques and supplement the heat with a fire.

We did make a two person design, that could possibly be adapted for a 4 person. From above it looked like a V shape with two people sleeping in the each straight section of the V. The entrance was where the two straight sections met on the inside of the V. You get two properly snug "sleeping bags" but also a small shared porch area at the entrance for gear. To adapt it for 4 you could make the sleeping bags a little wider and make them snug double sleepers.

I'll see if I can find a picture or two.

Arthur Haines
Author
Posts: 28
12
posted 8 years ago
Dear Ginger, most debris huts that I see built (including many photographed) do not function well as a shelter. We tend to think in terms of tents (more spacious), a shelter that works because we bring sleeping gear (bags and blankets) into them. Debris huts are made to function as the tent and the sleeping bag, so they are small, filled with soft debris, and have a deep covering of material to shed precipitation, wind, and (as importantly) biting insects. If you plan to seep inside one with sleeping bags and trail pads, then they can be made more spacious, but still need a deep covering of (preferably) broad-leaved debris to shed rain and a doorway that can be closed off well enough to keep insects out. One common mistake that is made is that people place supporting poles (to hold debris) on the ridgepole in such a way as to extend the support poles high into the air (so that they protrude from the debris). This can funnel rain water down into the shelter. Though most debris huts are made for one person, you can place two beside each other so that they share a wall (the inside wall), making it more efficient to gather covering material. Here are two videos (part 1 and 2) that explain the process relatively well.

Justin Jones
Posts: 55
Location: Lake Arrowhead, CA
9
posted 8 years ago
I've been working on a design for a debris hut, which I really prefer to refer to as a 'debris cabin', comfortable enough to overwinter in here at base camp. The idea is to build a warm, livable shelter, using mostly the dead woody detritus from the surrounding land and no powertools other than a drill; a true eco-building on the scale of traditional native american structures. I am going to attempt to convey my ideas using nothing other than the english language - no images (yet) - and I fully expect that much of it will be lost in translation.

The design is an A-frame with an excavated floor. The roof is pitched at a 60 degree angle. The poles are 10 feet long, yielding a floor 10 feet wide. The poles are spaced at roughly 1 foot increments. Pairs of adjacent poles on one side of the A-frame are bonded at the top and in the middle by horizontal braces, notched and screwed in. The two poles opposite the pair of bonded ones are seated in the ground, and v-notched at the top, to rest against the upper brace. The A-frame is braced across the floor mid-level; this brace rests on the middle brace of the bonded poles. From ground level, this makes the ceiling 4' 4" in the middle 5 feet of the cabin. I need a height of more like 7 feet, so the ground will need to be dug down 2' 8". The cabin can be as long as you like - in my case, probably about 15 feet. I haven't quite figured out the door and the back wall but they will both need windows.

Once the frame is up and the floor is excavated, the walls can be built. The first layer is 2-3 logs thick, stacked horizontally. The 'logs' in this case are usually around 4 inches in diameter. Empty spaces in between logs are filled with pine cones and straw (for better insulation). The rest of the walls, a total of 4 feet thick, are stacked vertically, to aid rain runoff. A plastic layer will be added to half the roof, and the other half will be thatched, perhaps with tightly bundled green ponderosa needles, as an experiment. The inner walls may be thinly cobbed later in the future. Light and heat will be supplied by candle mass heaters. Ventilation may be supplied by an earth tube run through the floor or a water-proofed thermal mass, a-la Hait.

Every day, every season there is change, something new to observe, and constant learning. Permaculture has the dimensions of a life-oriented chess game, involving the elements, energy, and the dimensions of both life-forms and building structures (also with political, social, financial, and global implications).

posted 5 years ago
Ben and Josh's creation that they call "the bear den". 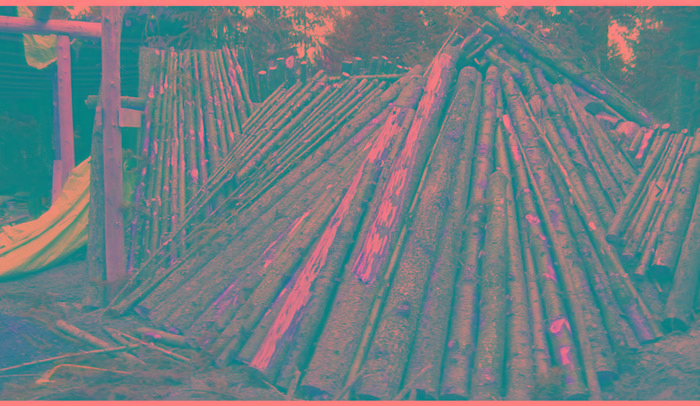 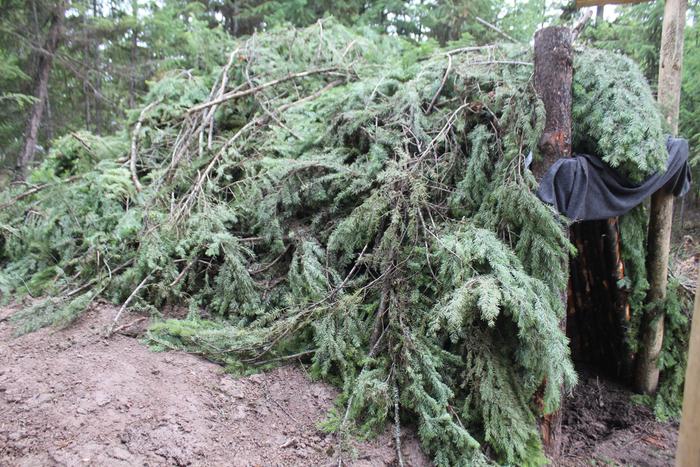 I think it has come a lot further than this now.   It has a rumford fireplace, a door and a window ...