chicken down hugel up

posted 6 months ago
Thanks Daniel. Interesting picture there. Notice the angle is about 43 degrees. That's supposedly the natural settling angle of things like piles of sand or rice. This hugel was built considerably steeper but I'm assuming will eventually settle at around that same 43 degrees.

posted 6 months ago
During the past week or two the hugelhump received a few strawberry plants & a few sweet potato slips. Maybe a few random seeds & a baby green bean plant too. Tonight this salad bar was officially opened. Chard, kale, & cabbage were the main ingredients of dinner.

The pics show the steepest slope of the hugel. It's located on the downhill side of the terrain so some stuff naturally slid off during winter. Surprisingly little though. The past few weeks have been warm & wet. I think Humphrey's decomposing innards are coming back into full scale action. The hump has noticeably shrunk in height lately & developed some cracks on this almost vertical side. One of the cracks is deeper than it appears in the pic. Yesterday some small sticks & comfrey leaves were stuffed inside. Today I raked up some lawn clippings & filled the remaining cracks & gave it a quick overall mulch before some storms started. Will add a layer of comfrey mulch in between rain showers the next couple days. Next week any available spot of soil will get bean & peanut seeds. Notice the sunroots!!!

Not visible in these pix but the wild rice experiment in the mini-pond seems to be doing good. Fairly sure now that it's rice & not volunteer lawn. Have observed many birds, bees, & butterflies plus a few lizards drinking from the pond. Mostly likely the groundhog has discovered it too.

There's a lot of healthy food about to happen on this hump. We expect to eat or preserve at least a little something from this hugel every day until winter arrives. I think it was well worth the roughly 20 hours it took to build. 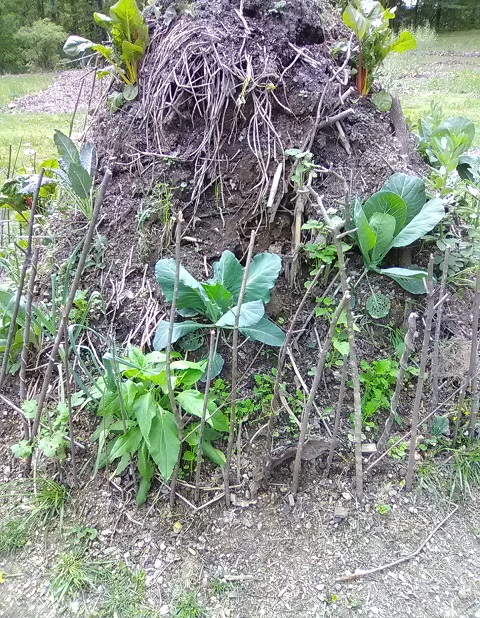 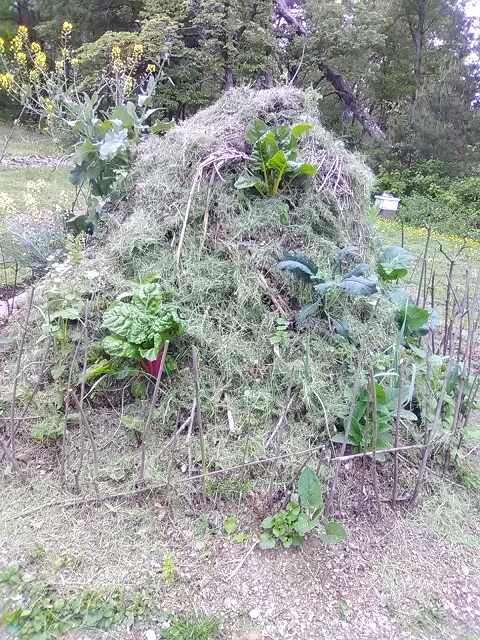 posted 6 months ago
Things are constantly changing on Humphrey. The largest brassica was cut down because it was seeding. It got too heavy & developed a severe downhill lean. Looked like it might cause a mini avalanche so it was chopped. The horizontal rainbow chard pic shows same the same basic thing but is in no danger except becoming dinner. A small batch of peas & fava beans are almost ready to pick. Recently there have been more beans & other seeds planted on it. Some are starting to sprout. The existing plants are all getting bigger & look healthy. Harvesting & eating something from it almost every day. The wild rice is still doing good. Many birds in the area now know where this little pond is. Something broke 2 sunroot stalks. Probably a family of groundhogs who live close. 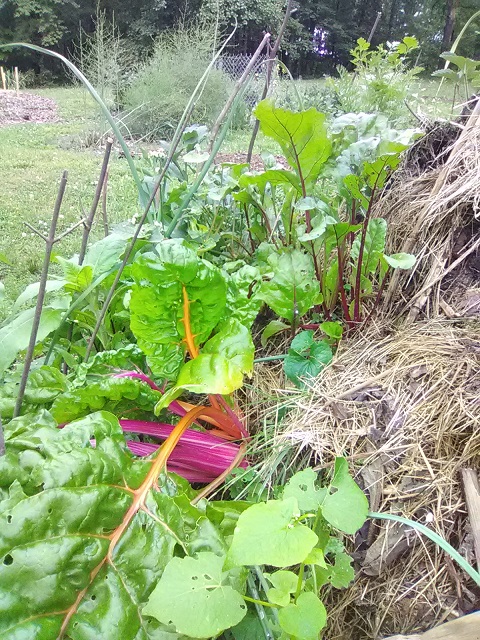 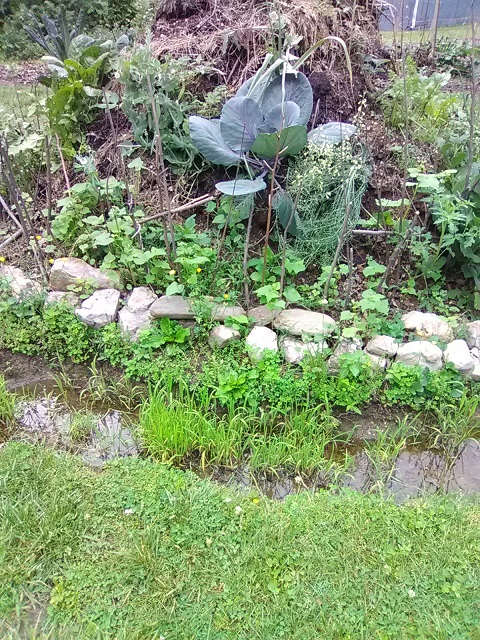 posted 5 months ago
WOw, wish I'd read the Saga of Humphrey through before trying to make my hugel bed...or before trying to make an estimate of the footprint for the person who kindly let me use her yard for it :p.  Well, fortunately, she's happy with the behemoth, but I definitely didn't think it through or wattle it through nearly as well as you, Mike.

I may post a work thread on mine as well as posting on the Permacutlure According to Paul (PEP) badge thread.

posted 5 months ago
Your Bogart hugelkultur is great Joshua. Made me laugh.

Humphrey got it's first haircut today. It wasn't pretty. Hedge clippers were involved.

It's now growing food faster than we can eat it. Some of the plants were getting very big & blocking a lot of sun from smaller plants. So I harvested 12 pounds of chards, kales, & cabbages. The chards will probably regrow but the cabbages & kales might not because the weather has been hot lately. No worries. Others are just as large in the main garden. What was harvested today won't go to waste either. After the hugeljungle was cleared a bit I staked up a few tomatoes & put one in tomato traction using some twine over the peak with a rock for weight. All the comfrey around the base was chopped down. Tomorrow that will carefully be spread on the hump for mulch. Peas are fading out but beans are kicking in!!! Found the first tiny tomato of the year once everything was cleared. There are some excellent looking beets. A few nice spinach too but those mostly got smothered out by chard. A couple of the squash plants are starting to get decent sized. Sunroots are getting rowdy. Buckwheat is almost ready to harvest. A few corns are near the top. Just because.

The pix show before & after today's activity. One shows the elderberry still growing on the peak. The last one shows young wild rice grains. Wild rice that has no chance of reaching maturity & giving us a harvest. Birds devour it about 3 days after it appears.

We get fairly consistent year round rains. Haven't watered anything this year except the wild rice in the pond. Lately I've noticed a couple of chipmunks hanging around. They're not super common around here so I think they found the pond water! There is a breed of tiny frog that lives here but haven't seen any around the pond yet. Only a matter of time. Bees & butterflies sure know where it is. 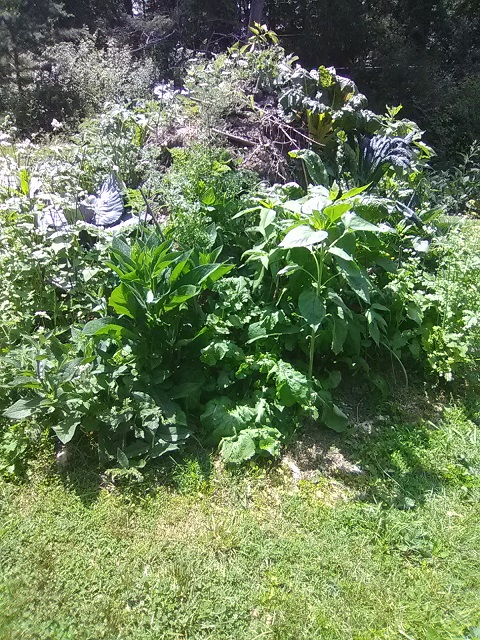 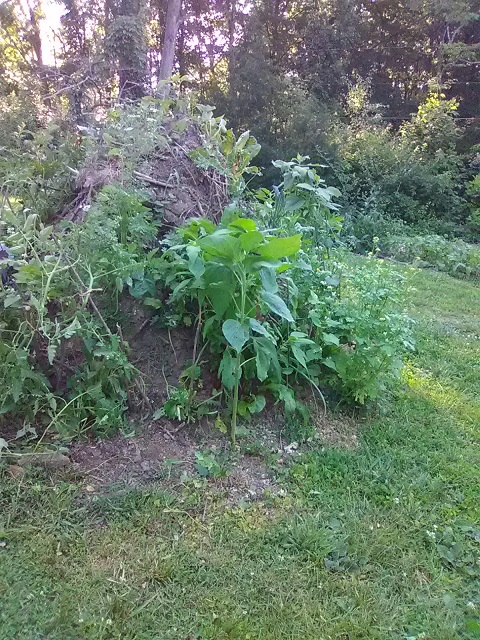 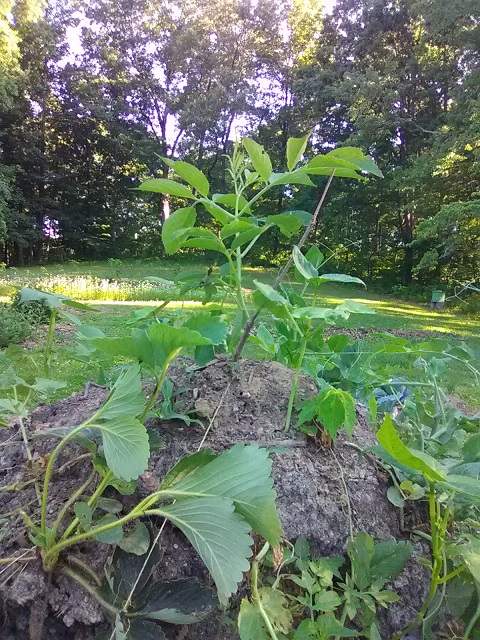 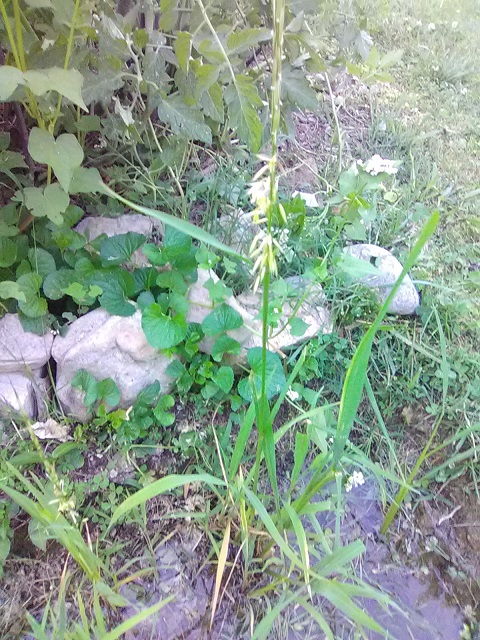 posted 4 months ago
A storm broke a tree limb so it seemed an appropriate time to start expanding Humphrey. Simple enough. Dug a hole. Filled the hole with the tree limb pieces & the original soil. Then mixed the remaining soil with some mostly composted cow manure & decayed wood fragments to top it off. Planted yelloweye beans in the new space. Might add a watermelon or two tomorrow. Rain is predicted for most of the next week so I'll try to dig up enough of an area to build another hump. Much easier to dig this soil when it's wet. There's a 120 foot maple tree nearby that fell last year. Plenty of wood!

Haven't watered the wild rice in about a month. It's still producing grains & birds still eat them all. Nothing else has been watered yet this year, except by rain. Since the last update there has been 6 or 8 grocery bags of chard, kale, & cabbage harvested from this project. Mostly chard. Gave it a mulch of about 20 large dried & crumbled comfrey plants today. The sunroots & tomatoes are getting large enough to almost completely hide the hump. Many young tomatoes on the vines. Started using some sticks to train the tomatoes off the hump so the other plants can grow too. They will need serious stakes soon. The last of the peas have been chopped down & the first squash was harvested earlier this week. Some beans are starting to climb. Corn, strawberries, & the elderberry are still doing their thing. There are some nice beets hiding among everything else. Might have to send search & rescue to harvest those. Threw some basil & oregano seeds on it a few days ago. Various flowers are almost ready to bloom.

If memory serves the original footprint was 49 square feet. Slightly larger now. It's now feeding 9 people on a regular basis. I prefer that over useless lawn any day!!! 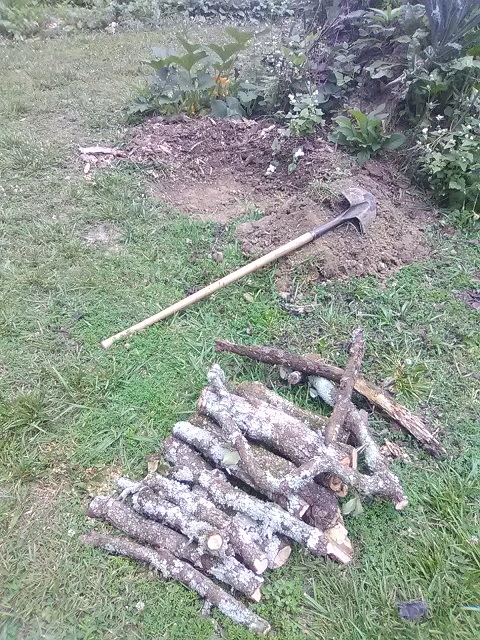 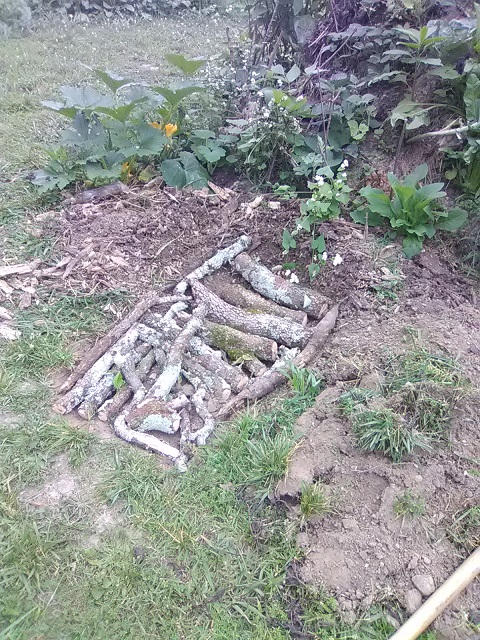 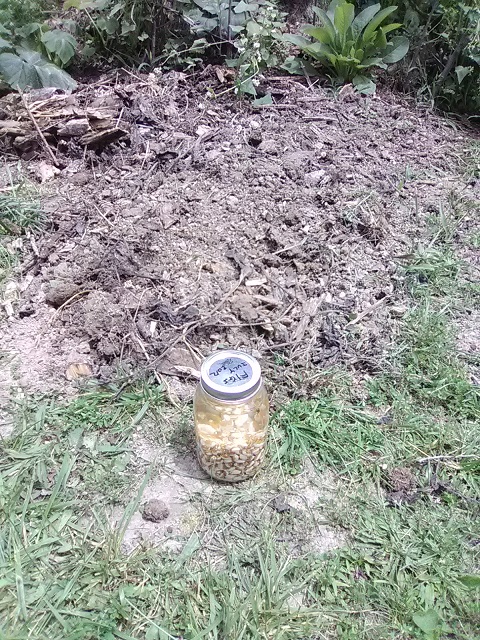 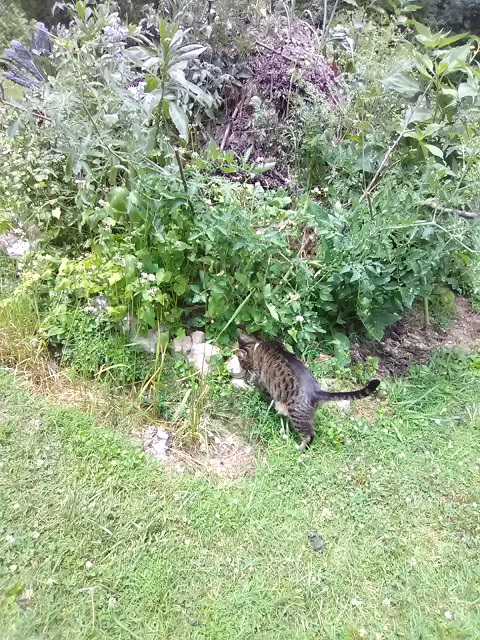 posted 4 months ago
A week or two later another storm knocked some more limbs down so another expansion was made. Some more yelloweye beans were planted but only a few are trying to grow. Those in the first extension are about a foot tall now & looking good. The soil in this extension is very poor compared to the first one. It's also well past planting time. Hot & dry lately. So far Humphrey hasn't need any irrigation but other parts of the garden needed some yesterday. Sunroots, sunflowers, & tomatoes are making it increasingly harder each day to see the actual hump.

My estimation is that the food already harvested from Humphrey is roughly equivalent to the time it took to make it. Everything harvested from here on out is essentially free food. Less lawn, more food. That's the plan.
more-extension.jpg 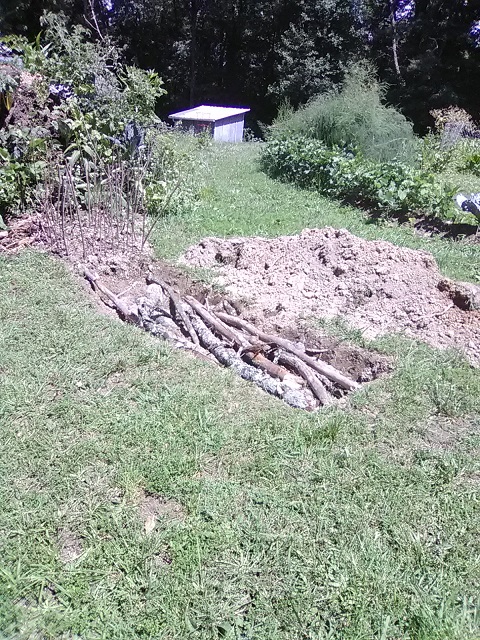 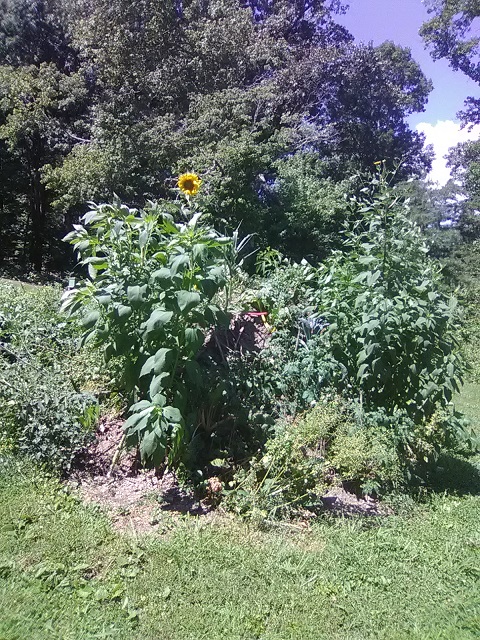 posted 2 months ago
Autumn is rapidly approaching. The hugelhump appearance is changing as summer plants finish up. Harvested the first of the sunroots yesterday. I'm not sure if this was just one plant or several because there were 2 main stalks & a few smaller ones. Look at this basketball sized clump of tubers! There was about 50% more still in the ground in that spot. This one clump is easily quadruple the total amount planted last year. Roughly 10-15 pounds. Harvested about twice as much today (mostly from a different garden area) & have a different variety there that are still flowering. Those are 12 feet tall. It might be overwhelming. Humphrey has produced an amazing amount of food this first year with very little effort. (not including the work required to build it)

Special thanks to Pearl & to Joseph Lofthouse for sending such wonderful specimens!
sunroot.jpg 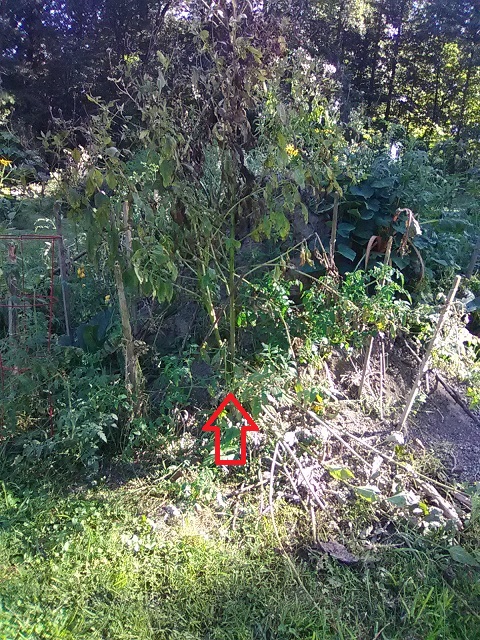 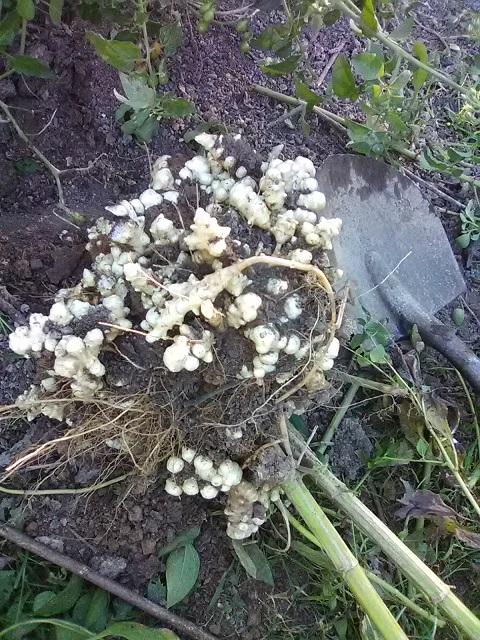 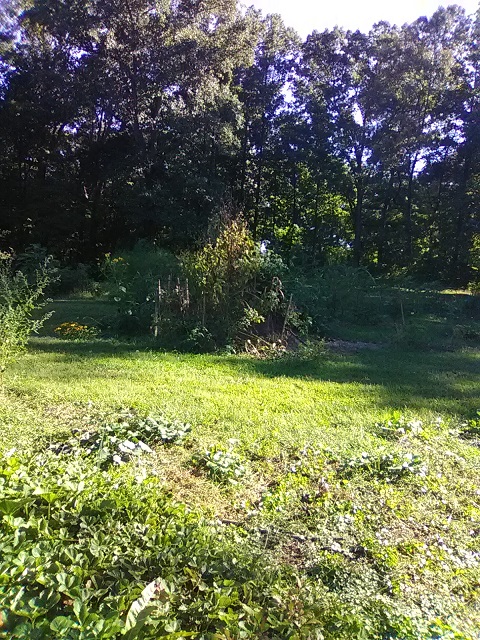 posted 2 weeks ago
Humphrey is about a year old now so time for an update. The good, the bad, & the ugly. The good is it grew plenty of food. There really wasn't anything bad except being over planted. It became a jungle. Most everything still growing on there now will survive winter.

The ugly became more noticeable after some crops were harvested or died off for winter. The height is about 5 feet now. Some cracks have developed. Some slippage has occurred, especially on the steep side. Some of the wattle framework is visible. The cracks will be filled, the slippage raked back up, some comfrey leaves will be added along with some soil & manure. The little pond is now filled with old logs, kitchen scraps, & other compost material. It will be topped off with soil. A thick layer of leaves will be added for winter soon.

Will plant a few fava beans on it before adding too many leaves. Next spring I think it will be completely planted with strawberries. Flowers in the pond & all around the base. Tomatoes or squash in the hugeltrench towards the dog. I expect there will be plenty of volunteer sunroots & tomatoes too.
top.jpg 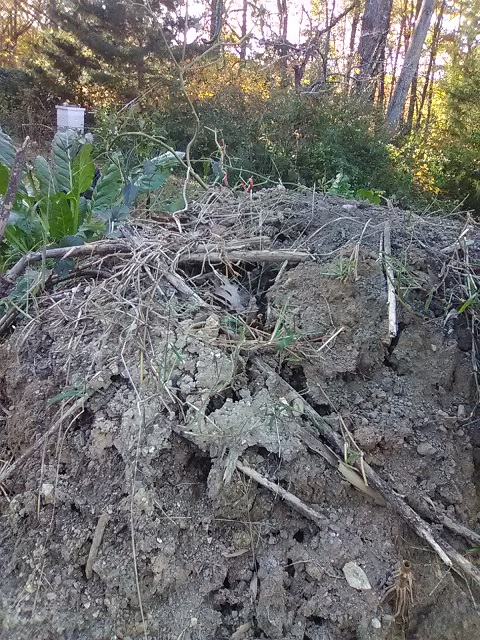 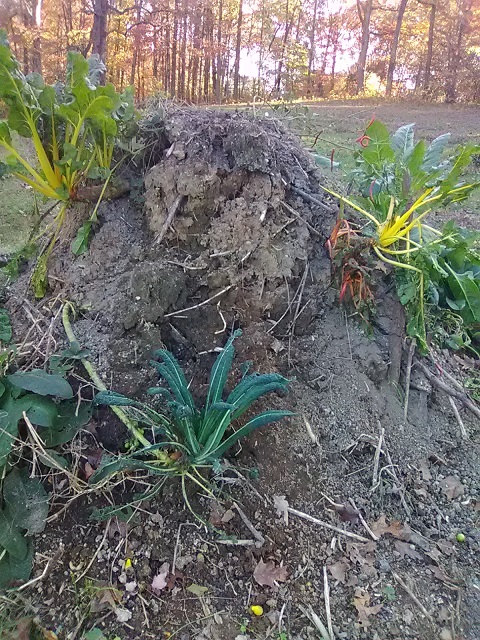 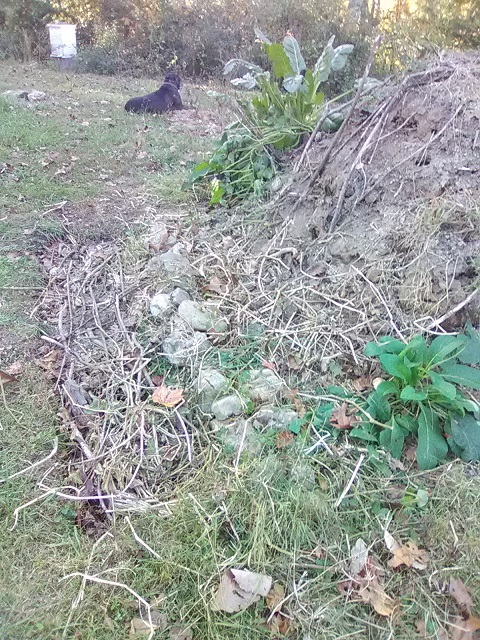