Does this mean that you dismiss the entire idea of invasive species causing environmental degradation ? Are the millions spent controlling invasives during tree planting completely unnecessary expenditures that planters have been duped into believing will help. Did I imagine the huge areas of parkland that have been overrun with ivy ? Are my photos faked ? ... -----

Concerning broom, I had about 2 km of it along a roadside which branched out to the point where any vehicle would be scratched up even when driving down the centre. It also made it impossible to discern where the road dropped off abruptly. If I were to get a wheel over this cliff, I could conceivably tumble to the valley floor. I got it under control and used it as mulch to favour trees that now shade much of the area. I agree that it should not be uprooted or burned.

Part of my deal with tenants on this property prescribes eviction for planting certain invasive species. There's a new one. Invasive species can render you homeless, just as they effectively do to many wild critters who find them unsuitable to their needs.

To any of our members in Oregon --- Please post a photo showing what ivy has done to your corner of the world. The cost of cleaning up Oregon's park lands would eat up the entire state budget for years and even then might fail. While we're at it, feel free to post a picture of range land overrun with tumbleweed, a lake choked with water hyacinth or a spot where your neighbour's bamboo is coming up through your asphalt. Let us know how much of this stuff you eat or use for any other purpose that isn't compost. How much area has been invaded and how many hours per year do you spend managing the problem ?

On the edible issue --- While it's true that there are plenty of edible weeds out there, they currently make up about 1% of my diet. That puts me near the top in this regard as most people eat none. The only invasive that is widely eaten around here is the Himalaya blackberry. When used as animal forage, it is possible to gain some significant benefit from a few invasive plants. The quantity currently eaten by humans in North American is a very small slice of the total biomass involved.

This thread started out as a challenge to put these species to productive use. It's not about eradicating them. Since the original posting, I have earned about $1000 in controlling them and I've eaten probably 150 pounds of berries, mint and wild fruits. If I'm able to sell the various tools that I'm making, more money will be earned. My road is now passable and broom on hot, dry slopes is managed for its nitrogen value.

I keep a large area of ocean view parkland clear of ivy by girdling the tree trunks, but I have no plans to attempt total eradication on my own. If you're in Victoria, check out the ocean side park between the Terry Fox statue and Cook St. Ivy is slowly closing in along the ground. My efforts have saved the canopy with extra effort given to the areas of Gary Oak that were completely engulfed and dying 10 years ago. When I started, it was difficult to walk amongst these trees or even to tell if they were still alive.

Since I don't have a degree in ivyology, my efforts are no doubt driven by pure pseudoscience fueled hysteria. :

The trees would have done just fine in windy conditions under tons of tightly wrapped vines without light and deprived of water.
Cohan Fulford
Posts: 79
Location: West Central Alberta, Canada
1
posted 7 years ago
To me the real test of an invasive species is whether it is an occasionally appearing exotic which simply adds another element to the biota, or a thug which grows in monocultures crowding out all natives in its path and thereby reducing biodiversity..

Dale Hodgins
Posts: 9002
Location: Victoria British Columbia-Canada
671
posted 7 years ago
Wikepedia has a good write up on the subject. http://en.wikipedia.org/wiki/Invasive_species
nathan luedtke
Posts: 165
37
posted 7 years ago
I think that there is a lot of potential middle ground between the poles of "Invasion Biology/Pseudoscience" and "Kill them with poison".

I did some work for the Nature Conservancy in the Florida Keys, and it always struck me as odd that they were using pretty nasty poisons to remove Lead Tree, Australian Pine, et al on backcountry islands, and not filling in those ecological niches with "natives".
Nevermind that you could call "natives" like mangroves a pretty damn invasive species- for goodness sake, they drop floating clones in the sea, which float over to sandbars, root, and colonize them!

I personally prefer not to use the term "invasive", as I feel like it's not an useful term, and there are parallels to racism/immigration politics. "This plant is not from here and is taking all the resources and it must go." Even so, I've seen Kudzu in action so I know what people are saying when they talk about "invasives".

I prefer to use terms like "opportunist" species. You don't see kudzu taking over in the middle of an established forest, right? You see it at the roadside, spreading out over disturbed or marginal land, until it starts eating at the forest edges. You see it along power line easements, railways, culverts- all places where the "native" flora has been disturbed. That's why I like Lawton/Holzer techniques- IMMEDIATELY after doing earthworks, you do dense planting and mixed seeding over all disturbed soil, ensuring that disturbed land doesn't further degrade and provide an inlet for unwanted opportunists. Contrast that with a road or building site, where the soil is disturbed, and then left uncovered, and degrades under rain erosion and solar exposure, until it's only suitable for weeds/kudzu/etc.

Lance Wildwood
Posts: 41
Location: Sunshine Coast BC
posted 7 years ago
We humans simply have too short a lifespan to contemplate the larger, more infinite/indefinite life cycle of a plant species in a new area. For the most part they will blossom and bloom to their hearts content then fade into some small iota of the new biosphere they entered. But hey, I guess I'm an old school permie that still reads books and doesn't listen to guvmint (sic) propaganda nor submit to political greenwashing by ngo's...
Geesh...I think 'global warming's' a scam as well? The only really 'green' thing that makes sense is permaculture. It's not only a green thing, but as we watch Cyprus unfold into a Euro collapse (The DJIA is tied to the Euro price oddly enough) which leads into a 2008 global scenario as far as markets go...its really the ONLY thing that makes sense! Any combat with plants that doesn't end in the compost or digestive tract just seems pointless.

Not to say you can't make a business out of it. Look at Gore and his carbon credit scheme or Washington state trying to put a CO2 tax on cyclists! you can not make this stuff up! But productive land use scenarios would eliminate most 'invasive plants' right off the bat. Kudzu=hog feed, scotch broom=soil builder, ivy=culling of chemtrail diseased trees. Geesh, I live in an islanded community (PNW) and have suggest that our 'official community plan' include cutting down all non food producing trees below the highway between sea and mountain.
I view things with a practical, trained eye. Not sentimentality for a supposed stasis in nature (edenic ideology) that I view as constantly in flux.

I am looking at warping my advanced course into a diploma course and this thread may just have solidified it into "the role of novelty in plant paradigms in highly disrupted terrains inhabited by personages who wish to retain a geriatric eye trained upon a supposed what-was'. Add to that "and will never live to see the 7th generation of ivy-broom interaction with feral rabbits and purple loosestrife but presume much in the face of not knowing but being told by supposed superiors'. Those 'piled higher and deeper' once known as PHD's.

They are 'invasive'! Bring back the gingko!!!

I charged $50 an hour on this project. It was a tough slog with lots of climbing. Ivy has already killed some nearby trees. They are near the ocean. Strong winds brought them down. 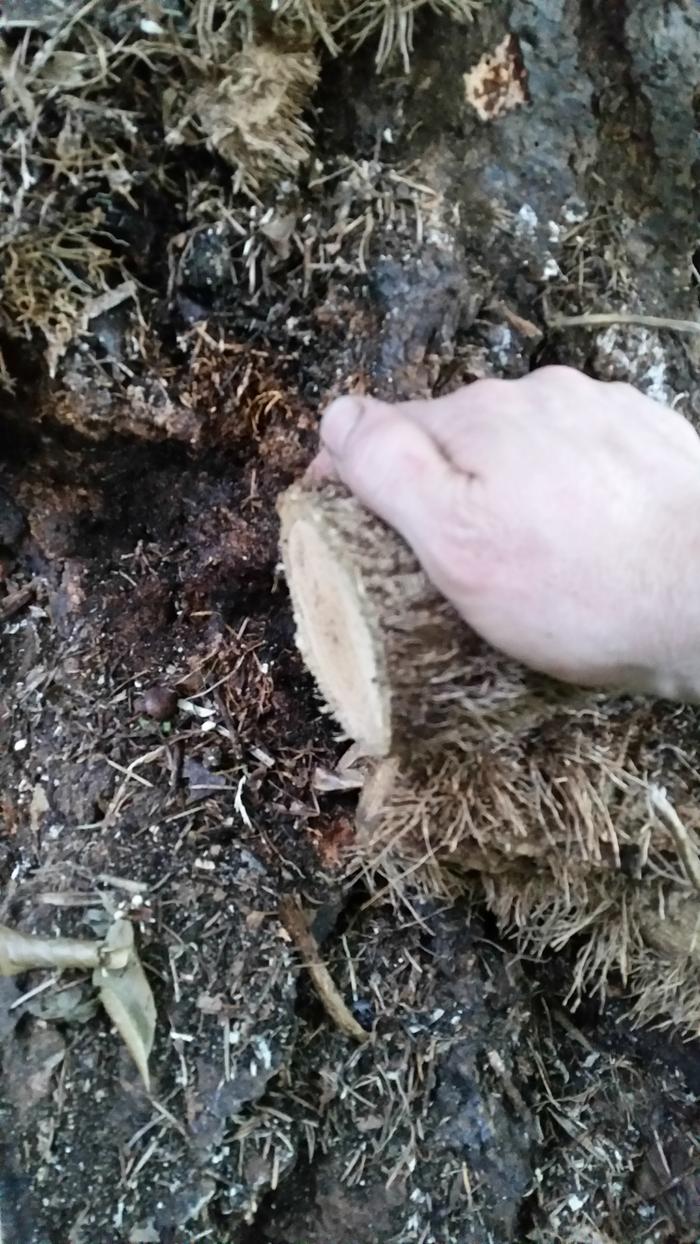 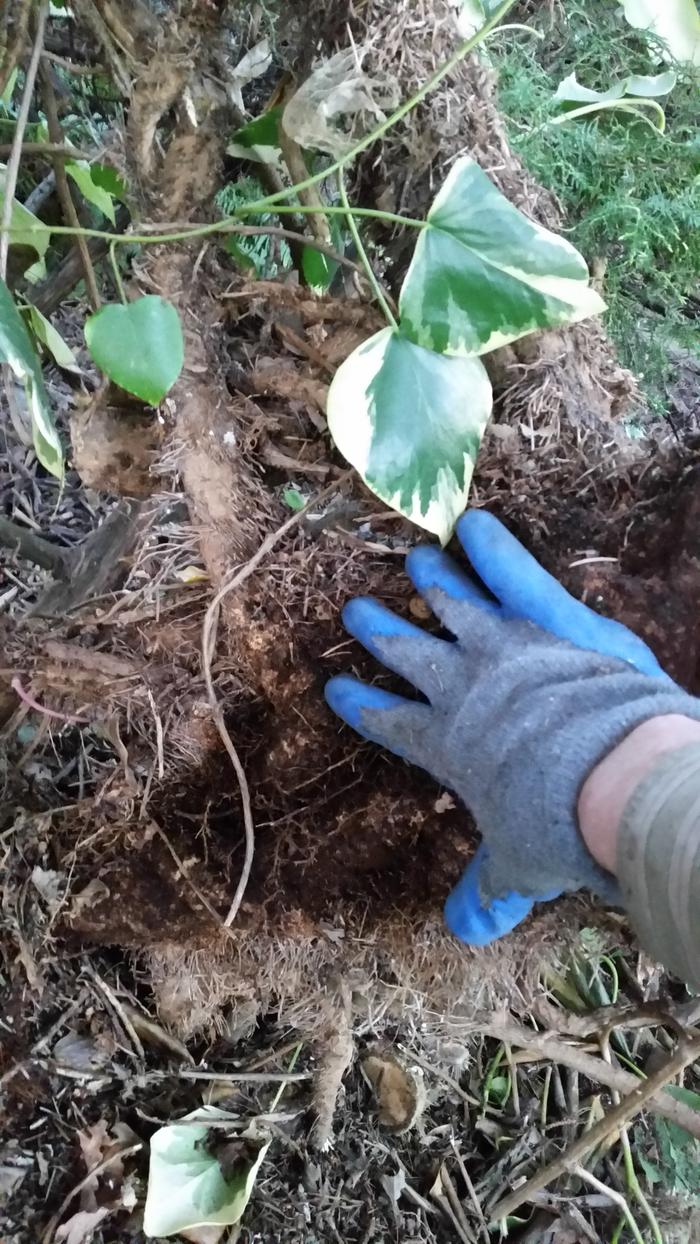 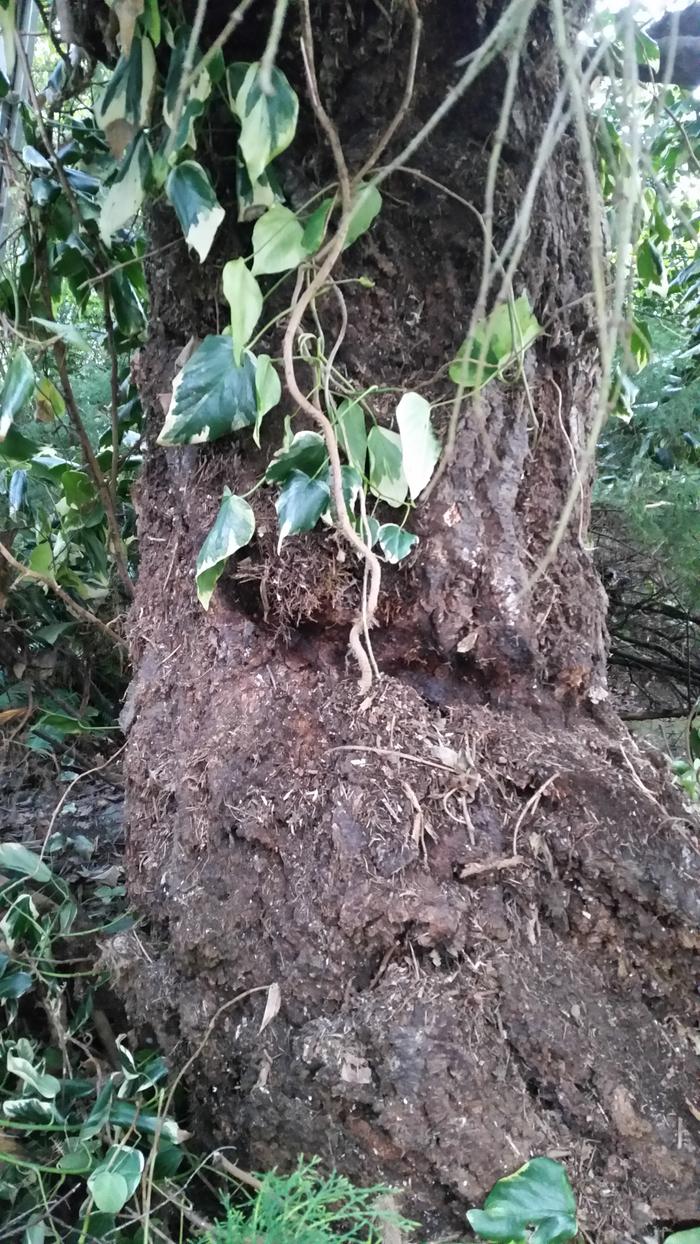 I bought some quality tools from Fiskars, which are making life easier. This little pile of tools cost $125 which seems like a lot, but it took me 2 1/2 hours to pay them off. Super light and strong. 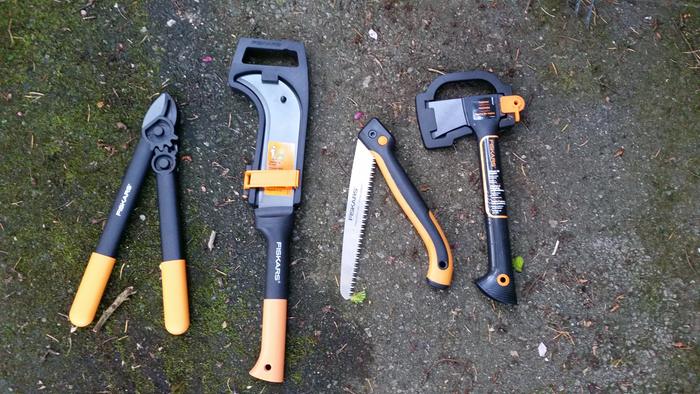 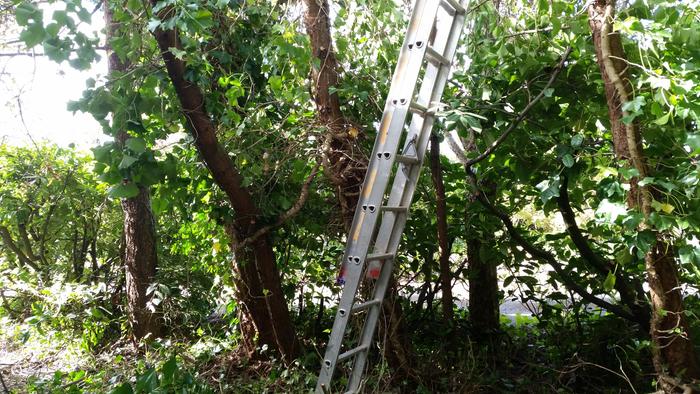 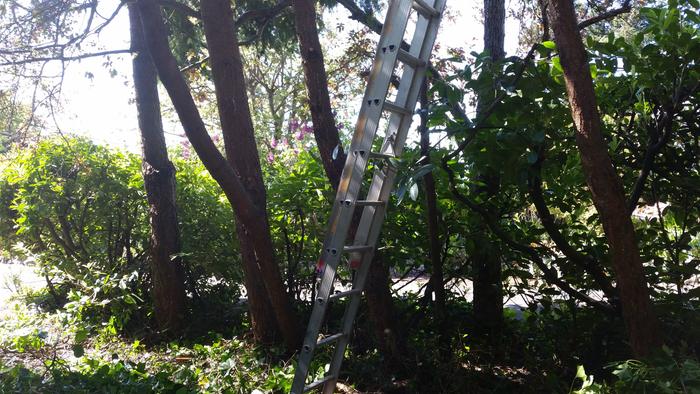 Sharon LaPlante
Posts: 26
Location: Brooksville, Florida - Zone 9a
1
posted 5 years ago
i have many invasives on my property and have found several uses for them, but i sure wish i had more ... wish i had the energy to put them to use in a business ... that would be a win win.

i have running bamboo that i constantly use for plant stakes. i add leaves to flower arrangements to add some greenery. i have yet to be able to prepare any shoots because my squirrels get up way earlier than me and beat me to them.

Skunk vine (Paederia foetida) has tasty leaves prepared as greens. http://www.sharonsflorida.com/skunk_vine_edibles.htm The vines are coiled and dried, and used to make a medicinal tea in asian culture. the dried leaves are used in ethnic dishes.

Feral hogs are delicious and i have dressed and had a freezer full many times. i love feral hogs, but they are a lot of work to butcher if you don't have a good set up for it.

Kudzu is too hairy to eat - http://www.sharonsflorida.com/kudzu_edibles.htm. it does have other uses though ... cordage ... livestock forage ... jelly from the flowers. Maikeru if you eat it i'd love to hear your experience because I couldn't get past the tons of hairs.

Water hyacinth - i use it for mulch and improving the soil ... seems like it has the potential for great compost.

air potato (dioscorea bulbifera) - haven't found anything it's good for. any ideas?

great thread! instead of spraying herbicides on those pests ... let's use them!
nathan luedtke
Posts: 165
37
posted 5 years ago
Dan Hemenway (not Toby) published this white paper on Kudzu Utilization back in 2006.

Full of great info and is a good example of really thinking through business ideas from a Permaculture perspective. It's a little sparse on details (he wrote it as a speculative venture- there's a note in there about further details being available if someone wanted to invest) but I'm sure all kinds of businesses could be built off of any similar "invasive" plants.
Dale Hodgins
Posts: 9002
Location: Victoria British Columbia-Canada
671
posted 5 years ago
Good news on the invasive species front in Great Britain!

Lenders are starting to refuse to mortgage properties that contain Japanese knot weed. Insurance companies are also steering clear of these properties. The entire financial industry has taken notice. The courts have ordered certain properties to be cleaned up and for the owners of those properties to pay for the cleanup of neighboring places that have been contaminated.

This can go into hundreds of thousands of pounds. Those who spread invasives to neighbors,  could find themselves bankrupt and homeless.

This is the most severe punishment that I've heard of for being party to this type of environmental harm. I hope  financial disincentives spread faster than kudzu after a rain.
...........
Now there's a business opportunity.  Whether you work for the home owners,  the bank or the insurance company, someone has to get rid of the stuff.
Michael Bushman
Posts: 144
Location: Sacramento, CA
8
posted 5 years ago

Fred Morgan wrote:Too bad there is no way ethically to utilize the worst invasive species...

(that would be us)