Jay Angler wrote:Permies who have "time" just because of self-isolation may be a rarer breed than you think!


Thanks for the response, Jay. I'm no stranger to living on a homestead and pursuing tasks & projects — been doing it for decades, and so have most of my friends.  Homesteaders aren't generally a lazy bunch just yearning for something, anything to do with their excessive down time. LOL  Nor do I think that people practicing backyard permaculture are folks without things to do.  All I can think of is that possibly you took my post in a different way than I intended it... and anyway the post was not aimed at you specifically, Jay.

However, all the above aside, there still may be some people who, for instance, used to go to work at an off-homestead job who now are not able to do this, for one reason or another — and who may be working on something such as what this thread is about. My shout out was to that sort of Permies member.

posted 8 months ago
Sorry Joel - I shouldn't have been a bit goofy! In case you didn't seem him, here is Sammy the Scarecrow!
https://permies.com/t/139611/permaculture-upcycling/ungarbage/Scarecrow-case-Scareeagle

He may not look exactly like a gadget, but considering I had to build for our climate (wet), I did have to think differently about how to build him (buckets and used chicken wire instead of straw for example).

What I was hoping was that if we had a few new posts to this thread, someone who *has* been doing something cool, will post pictures. Let's hope!

Amber Adams
Posts: 5
2
posted 8 months ago
This isn't something I've designed, but I recently came across this guy's YouTube channel and I'm definitely going to make his plastic bottle cutter. He goes into some depth on how to make it, use it, and how handy the plastic tape it generates is across a wide variety of applications. One man's trash is another man's tool:

Gary Bogdan
Posts: 4
posted 8 months ago
So happy I found all these homemade gadgets !
My neighbor has a weld shop and would be Interested in sure . What I would like is an auger big enough to dig 2' wide holes so I could plant , say a quarter acre of berries and also plant a 3 sisters or 5 sisters garden , using the auger to dig the hills . Thanks , Gary

Sorry my phone wanted to say anger even though I typed in auger !
Joel Bercardin
pollinator
Posts: 579
Location: Western Canadian mtn valley, zone 6b, 750mm (30") precip
72
I like...

Gary Bogdan wrote:So happy I found all these homemade gadgets !
My neighbor has a weld shop and would be Interested in sure . What I would like is an auger big enough to dig 2' wide holes so I could plant , say a quarter acre of berries and also plant a 3 sisters or 5 sisters garden , using the auger to dig the hills


Two-inch (and larger) augers are often found in the conveyor mechanisms of various machines, so could be the source for that part. Then something might be welded up, for fitting into a drill. Gary, maybe you or your neighbot could take some pics here of useful gadgets made by you or by him?

Amber Adams wrote:This isn't something I've designed, but I recently came across this guy's YouTube channel and I'm definitely going to make his plastic bottle cutter


You're right, Amber, he's got a good Youtube channel going — I've bookmarked it. Thanks.

posted 3 months ago
I'd seen a friend using a store-bought retriever to pull items from the front of his truck bed to the rear, or across the bed from one side to the other. It’s called a "cargo management tool". Simple principle. So, I decided to make one. It's basically a long-handled, L-shaped tool.

I used a length of broom stick on hand (52" long), and some 3/8” round steel rod. I forged an eight-inch piece of the steel rod, using an acetylene torch to heat the rod into the bright-orange heat range (around 1700* F), hammering it flat for about three inches on one end, and hammered the opposite end into a fanned-out, duck-bill sort of shape. Then, with the middle portion heated, I bent this metal head to about 90 degrees. A bit of grinding on the working tip rounded it off more and removed burrs. At the other end of the head, the part that would attach to the handle, I drilled a couple of screw holes.

I flattened off about a four-inch portion of one end of the broom stick. I spread some epoxy glue on the flat side of the metal head, applied the head onto the flattened part of the wooden stick, then drove in a couple of short wood screws. 24 hours later, the retriever was ready to use. I keep it in the bed of my truck all the time.

Obviously, the second project (a tree-pruning aid) was simpler to fashion. It’s just an old broom handle with a hole drilled into an end, into which I drove the wood-screw type end of a hardware-store utility hook. Often I’m way up a ladder when I need to pull hard-to-reach fruit-tree branches nearer and make pruning easier, or sometimes just possible at all. Sure, it’s almost effortless to make, but it’s very handy.
Truck-hook.jpg
Tr.-hook-detail.jpg
Tree-hook.jpeg

posted 2 months ago
I'd been meaning to make something like this for a while and finally the other day I realized by opportunity to harvest wild apples around here was done for the season so I set about making an apple picker for the high branches.  At first I was going to metalsmith up something more complicated (and admittedly nicer all around) but then started thinking about the random stuff I already had on hand that could be cobbled together to make one.  I post a shot of the stuff I started with, a vinegar container from the recycle bin, some longer screws and bolts, and a couple pieces of scrap grid beam I've been making for another project.  In the end I used a few different screws and grid beam from the first photo to get a longer reach on the tines.  Then I bolted it all to an old extending pole I've kept around for years knowing it would be useful some day.  A bit of the ever handy duct tape to soften sharp edges and I've got a cheap functional apple picker!

You are welcome to check out my blog at http://www.theartisthomestead.com or my artwork at http://www.davidhuang.org
My latest blog post is Recent Studies Reveal Awesomely Effective Treatment for Rampaging Disease.

posted 2 months ago
Very nice picker David. Do you have problems with seeing the apple to guide the tines to just the right spot because the vinegar jug gets in the way? If so, wondering if it could be made out of a see-through clear plastic container instead?

David Huang wrote:At first I was going to metalsmith up something more complicated (and admittedly nicer all around) but then started thinking about the random stuff I already had on hand that could be cobbled together to make one.  I post a shot of the stuff I started with, a vinegar container from the recycle bin, some longer screws and bolts, and a couple pieces of scrap grid beam I've been making for another project.


Hey, that picker's great David! I like it as it is — to my mind, no need for an artful metal piece. It functions, and actually looks interesting too!

Plus, it's inspirational: it demonstrates what can be done with odds & ends, along with a bit of imagination and finesse.

posted 2 months ago
Thanks Gerry and Joel.  I do like how it demonstrates what we can do with odds and ends too.  To answer your question Gerry, I was generally able to position the tines seeing well enough around the vinegar container.  However, as I was picking apples I decided that if I find myself with some sort of clear container in a similar size and shape I would change out to that.  I think having a clear container would be advantageous.

You are welcome to check out my blog at http://www.theartisthomestead.com or my artwork at http://www.davidhuang.org
My latest blog post is Recent Studies Reveal Awesomely Effective Treatment for Rampaging Disease.

posted 2 months ago
Here's one from a month ago. We have been giving our dog fluids via subcutaneous injections. The syringes have very little to hold onto, and are therefore difficult to operate.
I have a machine shop at work, so, plan A was to machine a handle out of a solid block of aluminum (too much work)... plan B was assemble it from 3 parts (still a lot of work) or solder the parts together? (less work)...
I had some copper tubing to make finger rings, but not the right size tubing for a sleeve to fit the barrel of the syringe... I'd have to make some (more work again)

Here's plan C, the "don't go home empty-handed plan": all cut and bent from one piece of the tubing I had chosen for the finger rings (3/4" copper plumbing pipe, from the scrap bin). Done in under 20 minutes.
Turns out the gap in the sleeve is a feature, not a bug, since it allows the gadget to slip on/off without having to thread the whole long needle tube through.
syringe-ring.jpeg 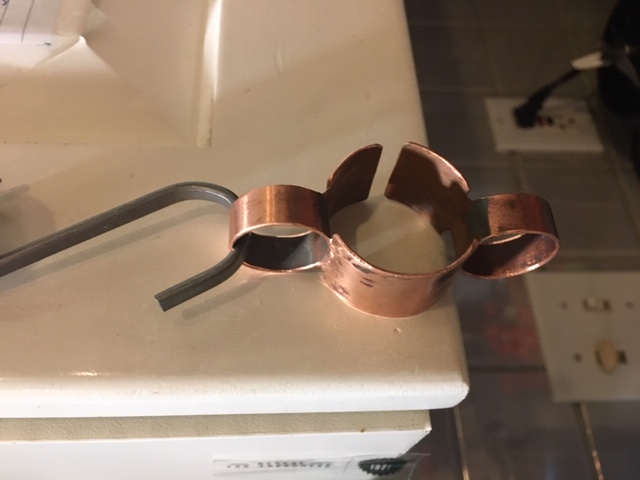 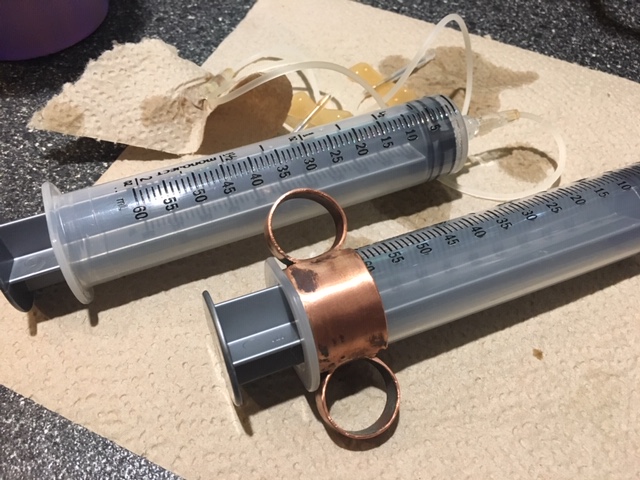 posted 2 months ago
Great job Kenneth!  A couple of questions. 1) Did you solder the ends of the finger loops to the body?  2) Did you heat up the copper before bending?

posted 2 months ago
No annealing, it was soft enough to flatten and bend using a small hammer.
No soldering required!!! It is all made from one section of pipe, all one piece.
The length of pipe is 3x diameter of syringe barrel. The finger rings were centered on the quarter points of length, two saw cuts for each leaving 1/4 of the circumference of the pipe. The ends and center section that would wrap around the syringe were cut away to leave 1/3 of the circumference of the pipe.
The ends an center were flattened before forming into a circle, and the finger rings needed a little flaring with a ball pein hammer to make the curve smooth.
If I were trying to get the ends to meet, the 3x diameter would’ve been 3.14159 x (diameter + tubing wall thickness + an allowance for clearance)... far too fussy on the maths, especially with handy whole numbers in metric (30mm) that could be done in my head by using ‘3’ instead.
The other feature of the open shape (intentional) is that it springs a little bit to grip onto the syringe, staying put.