If you were a survivalist....

Tara Swenson
Posts: 26
Location: Portland, OR
2
posted 6 years ago
where would you live in Cascadia?

I'm not really much of a survivalist/prepper, but am starting to develop leanings that way... More in terms of natural disaster preparedness than societal collapse, but thats just me.

I'm just curious where others who feel similarly have chosen to put down roots and why?
Deb Stephens
pollinator
Posts: 643
Location: SW Missouri, Zone 7a
127
I like...

Tara Swenson wrote:where would you live in Cascadia?

I'm not really much of a survivalist/prepper, but am starting to develop leanings that way... More in terms of natural disaster preparedness than societal collapse, but thats just me.

I'm just curious where others who feel similarly have chosen to put down roots and why?

Tara, I don't live in Cascadia, but that would be a good general place to be in I think from what little I know of the area. There appears to be an abundance of water (#1 priority for me), and that area is not going to be a prime target for a nuclear war or even a nuclear facility meltdown. You would have to be prepared for earthquakes and eruptions, of course (well, in some areas), but there are definitely worse places to be in a SHTF scenario. It is not over-populated either, so no wild rush to grab whatever resources may be available if the crisis is sudden.

If I had to choose any place in the world to be though, I think I would go to Canada -- it is still relatively wild, unpopulated, and there is more available fresh water there than anywhere else on Earth. I would NOT come to where I actually live (SW Missouri Ozarks) because everyone around here thinks the answer to a disaster of any kind is to build up a bigger arsenal than anyone else has so you can shoot anyone who stands in the way of taking what you need! :

posted 6 years ago
I don't know much about northern California or BC, but I would assume away from the shore (Puget Sound is safe, as tsunamis wouldn't make it through), as well as away from any lahars that could come out of the many volcanoes. They might not be active now, but you never know when they might start up....

So, for example, Glacier Peek in Wa would keep you from Arlington, Mount Vernon, and Darington. 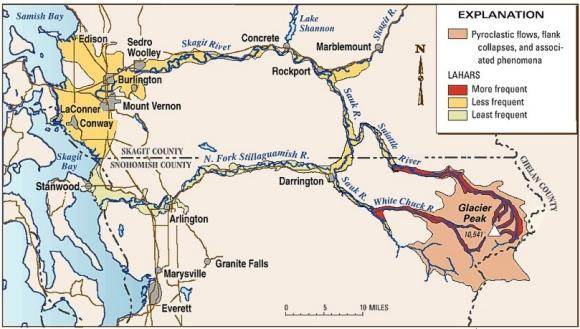 Mount Baker would rule out Burlington and Bellingham 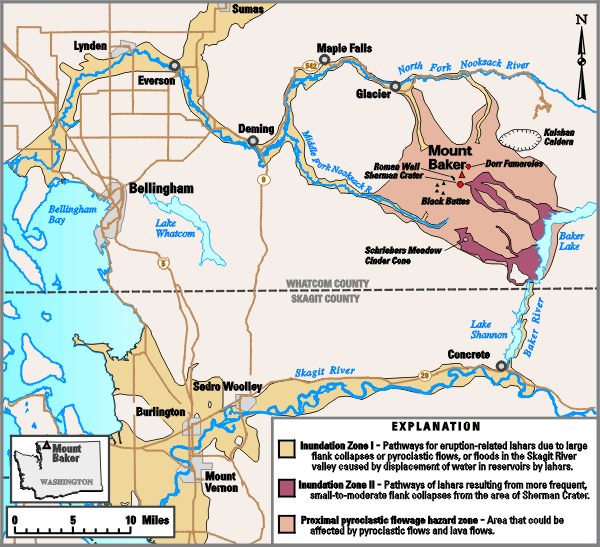 I'd stay away from the foothills around those cities, too, because many roads would be down. Anywhere south of Seattle, you have Rainier, St. Helens, and Adams' lahars. So, if you wanted Washington, I'd go for the area south of Arlington and north of Tacoma. I'd also go for the foothills, as that has less population density--as long as it's not too far for you to walk home from work if disaster struck. Inland on the Olympic peninsula would also likely be good, though there might be more fire danger on the eastern side of the Olympic Mountains.

I'd avoid Eastern Wa and Oregon for the same reason--fire danger; as well as volcanic ash fall-out.

The Oregon Coast Range is likely also a good place to live. Fertile area, no lahars, no real fire danger, no tsunamis.

Of course, look at the individual property, too. Make sure it's not in a flood plane or on unstable, avalanche-prone land.


~ Dragons, Fairies and even a Mini-Paul! ~ You Know You're a Permie When...~ All About Permies, including tutorials ~Herbal Hugel Spiral of Randomness!~Tricks to Keep the Dirt from Sliding off a Hugel~List of Cascadia Bloggers and Facebook Pages!~

Jack Edmondson
pollinator
Posts: 426
Location: Central Texas zone 8a, 800 chill hours 28 blessed inches of rain
76
posted 6 years ago
Interesting question. One I have some background contemplating. I decided to return to Texas but lived in Cascadia for 17 years. Here is my take on the question:

The Olympic Peninsula (on the wet side) is just about the ideal place for me. Land is cheap. Often one can find acreage for $1k/acre. With land that cheap the battle is often water. The Pacific side gets 14-22 FEET of water a year (The Hoh rainforest is here.) The climate is temperate. Much of the peninsula is USDA hardiness zone 8b. As a comparison Houston is 9a. That means 3 growing seasons, possibly a 4 season harvest with the use of cold frames or greenhouses. There is fish and game in abundance to supplement food supply in the proper seasons. There are thousands of acres of public land to hunt and fish should the need arise. Temperate climate, cheap available arable land with good soil, plenty of rain, recreation, solitude, and available medical care make the peninsula ideal for me.

There is currently 20 acres north out of Hoquiam on West Ocean Beach road, that has been on the market for a while. Asking price is $25k, but I believe they would negotiate. Also it appears 10 acres of it is in reproduction fir and hemlock which in a few years would provide a nice cash crop to off set the purchase price, if one was interested in selected logging. The elevation is 160 to 220 feet above sea level but most is flat plain with south slopes on the very northern edge of the tract, making for great orchard space. Power is at the road about 500 yards. Well depth in the area can be as little as 130 feet from what I can find. 10 acres are already cleared. The road to the property is gated, so I believe your 'neighbors' would be timber company land; but Gray's Harbor does not have their tax rolls on line and searchable to verify.

If you have ever seen the "back to eden" documentary Paul Gautschi's farm is on the peninsula. He is on the 'dry side'; but same hardiness zone.

Look at what he can do with only a few inches of rain per year, as opposed to feet of water. Also the amount of slash and logging waste readily available all over the peninsula would make a great resource for wood chips or hugelculture if one felt the need to augment the rain absorption of the soil.

As for risks stated before, I consider tsunamis, volcanic eruption, and earthquakes to be non issues, both from a stand point of risk, and infrastructure. If they are a concern for someone, I would add that the Olympic range is not volcanic, eruptions and lahars are not possible. The closest threat is Mt. Rainier a hundred miles and many drainages away from the coast. Puget Sound would stop its effects far short of the coast. Prevailing winds would blow ash away from the coast. I have been camped on the peninsula within a 40km radius of the epicenter during a 5.3 quake. Without buildings and modern convinces to disrupt, it was nothing more than trees swaying as if a strong wind. Although the animals seemed confused for a few hours. (I had several black tail does let me walk within a dozen paces of them, as if to ask "what is going on?") Finally, most of the western coast is cliffs and 'high banked', making a natural levy at the coast. Although drainages would act as funnels raising levels farther in land, most of the elevation of the upper coast is hundred feet above sea level, with high ground available to get above any incoming flood.

That is my take on the question. I would encourage anyone looking at starting a small permaculture farm to consider the area. The Quinault area is a very overlooked part of Western Washington that has a lot of positives for the small permaculturalist.
Thom Foote
Posts: 35
Location: Colbert, WA
posted 6 years ago
The Cascadia region also has a suplus of people. Something to think about. Eastern Washington is less populated, enough water and plentiful resources and you can still find affordable land.