Katya Coad
Posts: 24
1
posted 6 years ago
Hi, I have some questions about very sandy soil, and I’m wondering if anyone can help me. My husband and I bought our (bare) property about 2 years ago and so have only just finished having the last of the excavation work done this summer. Our soil here is incredibly sandy, as in 95 to 98% sand. It has great drainage, but that’s about it (I’ve attached some pics). I desperately want to see some greenery around our yurt next Spring (other than the natural foliage, which is also beautiful… I was thinking of various groundcovers like thyme and others) and want to get in a veggie garden as well, but I’m new to the whole gardening thing and not sure how to proceed. We also won’t have any of our own compost ready until probably the following year.

I guess building the soil up over time would be best, but wouldn’t that mean years of waiting? Should I buy some clover seed and plant, say, 30 lbs (I read that) on the acre or so around the yurt? We have wood chips down at the bottom of the property… should I scatter some?

On the other hand, I guess we could just buy a whole bunch of topsoil to throw down everywhere, and in some raised beds as well, but I guess that would be very expensive and I’ve read that you have to be careful buying topsoil, as you don’t know what you might be getting, so I'm not sure about that either.

If anyone has any suggestions, I would so much appreciate them.
DSC_3674.jpg 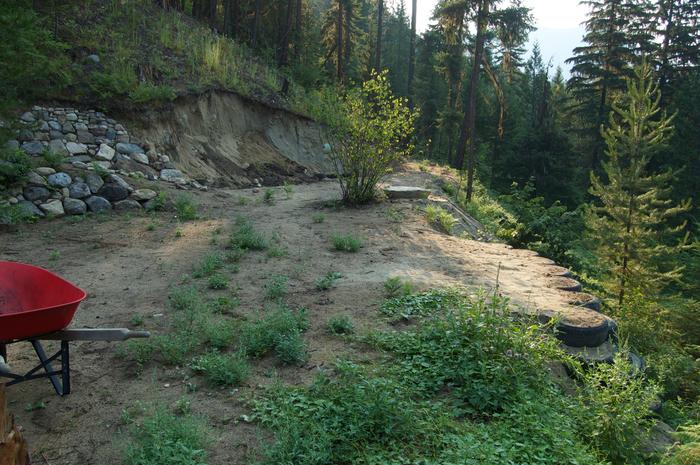 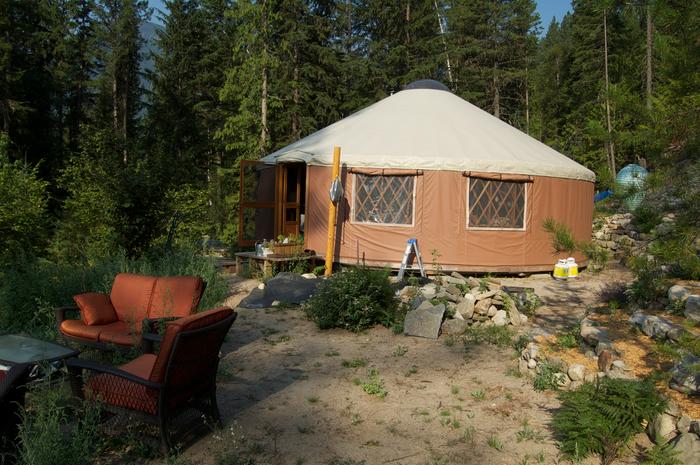 Alder Burns
pollinator
Posts: 1606
Location: northern California
218
posted 6 years ago
I would investigate the possibility of making biochar with those wood chips or other woody debris, and even waste paper. Sandy soils have a way of eating up organic matter, especially in warm climates. Biochar will slow this process down and give you a longer-lasting amendment. Best is to pile the char and inoculate it with urine or other high-nutrient matter before putting it on.....
Dale Hodgins
Posts: 9002
Location: Victoria British Columbia-Canada
671
posted 6 years ago
I would call excavation companies to see if you can get a good clean source of clay. Add enough clay and organic matter and eventually you'll have loam.
Peter Ellis
Posts: 1536
Location: Fennville MI
60
posted 6 years ago
If you include some location information it helps people focus their advice a bit more. For example, my soil is pretty much one hundred percent sand. But, I am only a few miles from the ocean in a wildly different environment than your photo shows

Still, some suggestions. Don't scatter wood chips, pile them six inches deep. You want to get some concentration of your amendments.

I would recommend doing 'raised beds' but not the box framed kind people fill with purchased dirt.
Instead, dig a trench, load woody debris, leaves, any manure you might be able to find, into that trench and then bury it again. The area will be raised above surrounding soil level because you have both fluffed it up with the digging and lifted it with the load of organic matter. Put a load of mulch on top, whether wood hips or leaves or both, to protect the soil from erosion and reduce evaporation. The buried stuff will start to breakdown and promote fungi and soil bacteria and worms, lots of friends to help with your gardening. It will also hold lots more water than the sand would on its own.

In small areas, say four feet wide by twenty feet long, you can have a pretty significant impact on the soil pretty quickly.

The bio char suggestions are worth following as well. It will be good for you to get some cover crops going; nitrogen fixers, dynamic accumulators, plants that will grow well in your climate and provide lots of organic matter for you to chop and drop and use as mulch in the garden beds.

You don't need to bring in topsoil - it won't stay, water will carry it down through the sand and you won't even know it was there in a year or two.

Those are my observations, from working the sand bar called the "New Jersey pine barrens". And get chickens, if you possibly can. The very best soil on my property is the place that was the chicken run for about six months, and with only 3-4 chickens!

It's really hard work to get and keep it rich and water-retentive enough to grow demanding things like 'traditional' vegetables, productive trees etc.
In my extremely sandy environment, I've developed and maintained the soil for the more demanding plants
but I'm thrilled if there's something that also copes with dry sand without 'proper' summer heat-figs, globe artichokes, any old Mediterranean herb...
I mix in a lot of locally-adapted native plants as aside from encouraging wildlife, they can't stand mollycoddling, which suits me just fine!
Dale Hodgins
Posts: 9002
Location: Victoria British Columbia-Canada
671
posted 6 years ago
That's a word I'm going to adopt --------------

As suggested above do you have access to excavated clays, more wood chips, manures?

My soil is a very fine silt and land is on a slope. Inspired from this site I do a modified "post-hole dug zai pit" for each plant
1. Shovel off top soil layer and save
2. Use post hole digger and go 18" down (or as needed for roots of plant)
3.line bottom with biomass gley (leaves or paper, etc) to slow water absorbtion
4. Mix in mature compost with soil removed. At top mix top soil and organics
5. Leave a small basin so it collects water
6. Build a small semi circle basin on the down slope side to also help collect run off rain
7. Plant

It might be efficent to compost directly into the "PH zai pits" and save a handling step.

If you hit bedrock or clay in only a foot or two, the picture is very different than the coastal sandbars that tend to be practically bottomless sand pits.

Katya Coad
Posts: 24
1
posted 6 years ago
Peter, the sand goes all the way to China…

Tim Malacarne
Posts: 226
Location: South central Illinois, USA
2
posted 6 years ago
I see some excellent advice posted above... You have to sorta re-gear your mind toward scrounging for organic matter. Recently, a farmer friend of mine brought me 2 farm truck loads of rotten silage, the composters delight, because he remembered how much I like it...

I have to say, it looks to me like you are doing a good job so far. Keep up the good work! Best, TM
Katya Coad
Posts: 24
1
posted 6 years ago
What about a wood chipper to make our own soil over time? There are tons of tall pines that are constantly falling on our property… we've been told the bulk of them are reaching their lifespan. Kind of makes sense to utilize those, but are there any reasons this is not a good idea?
Leila Rich
steward

Katya Coad wrote:What about a wood chipper to make our own soil over time?

Pedantic I know, but for me, as long as you mean "to add organic matter to the mineral soil", that sounds fantastic!
Be prepared: getting as much organic matter as possible onto/into the native sand may become a bit of an obsession

Katya Coad wrote: are there any reasons this is not a good idea?

In my experience, conifers make perfectly fine mulch.
The turpines in the wood may slow decomposition a bit, but nothing dramatic.

Dale Hodgins
Posts: 9002
Location: Victoria British Columbia-Canada
671
posted 6 years ago
Being in the West Kootenays, I suspect that you have quite a bit of rock flour in your sandy soil. Glaciers have been there recently, in geological time. This sort of "sand" isn't nearly as nutrient deficient as Florida sand or sand from beaches. Rock flour silt often contains many nutrients that plants need. Water retention is still a major issue, but these mountain soils are simply too young. They contain many of the building blocks needed in a good garden soil. My rock flour hugelkultur is performing pretty well. The main thing lacking was organic matter to hold moisture. Every time a worm ingests the small particles, minerals are made available.
Ray Ko
Posts: 15
Location: Central Virginia zone7
posted 6 years ago
What finally seems to be working in my sand box of a garden is using a middlebuster to make a trench a foot deep and a foot wide the legnth of the row. Then filling it to about 6 inches above ground level with good soil/compost (18 inches total). Then, mulch heavily and no-till from then on. Phenomial results. No weeds. No irrigation. The row has plenty of moisture even though the paths look like a barren wasteland.

The first time I tried this, I skipped the no-till step and plowed the garden again. It quickly went back to a barren wasteland.

Rob Browne
Posts: 65
Location: Blue Mountains, NSW, Australia
posted 6 years ago
For your intensive vege patches you could consider wicking beds to stop the nutrients and water just draining away. For the rest of thegarden make haste slowly with lots of mulch that is thickly layered and get lots of local native plants established as nursery plants.

Katya Coad
Posts: 24
1
posted 6 years ago
Just wanted to say thanks again everyone for all your great suggestions... lots of terms and ideas I'm unfamiliar with, but I'm slowly learning.