Karen Walk
Posts: 122
Location: VT, USA Zone 4/5
4
posted 7 years ago
I'm thinking about incorporating some grazing animals into my food forest next year. It is young and has many low shrubby fruit bushes (blueberries, currants, raspberries, saskatoon, etc). Many of my trees are quite short and young. Are there any animals that have a strong enough preference for grass over trees and shrubs that they could be fenced in with the food forest as long as they have plenty of fresh, delicious grass? Are there other animals who could be fenced in with the trees/shrubs?

posted 7 years ago
What is your climate, hardiness zone, and location? What local animals live natively in the area? Are there any closely related species that could be integrated into the system?

The first things that come to my mind are chickens, ducks, geese, and rabbits. I think sorting animals out by size would be a good way of deciding what to add; in my environmental science class, we learned that animals feed following a method of Preferential Order of Consumption- similar to how humans eat one thing over another. As long as their favorite foods are there, they probably will not go after the trees and shrubs. The reason I bring height in is that controls their potential eat; smaller terrestrial organisms like rabbits are constrained by their height and ability to move around. The birds may prefer the berries over the grass.....

We have lots of wild deer (they eat the trees if they can get to them). And also lots of wild rabbits. I have about an acre of food forest, plus another 10-15 acres of pasture. I'd like to stick with larger animals because they are easier to manage fence-wise. I have three goats now, and they are not allowed anywhere near the trees. For them, the trees are like preference numero uno. They eat grass from time to time as well, but prefer the forest edge and shrubs. Would love to find a larger animal that will respect 2-3 strands of electric wire that at least won't devastate my young trees if they get out.
Dave Burton
steward

posted 7 years ago
Does anyone in your area raise pigs or sheep? They might be possible options....

Tim Wells
Posts: 120
Location: Essex, England, 51 deg
1
posted 7 years ago
My soay sheep graze 20 year old woodland. They eat a small amount of lower leaf. I shred some coppice for them to browse. I would be concerned about access to young trees. They ignore the elderberry saplings that self sow. They do bark a little though what they eat doesnt seem to kill the tree. It appears that they leave enough cambium intact. They munched a blueberry i put in as a test so I would wire soft fruit to protect.

Pigs prob a better option. My pigs will take the sloes (blackthorn) berries and apples from low branches. My Kune pigs graze and a pot bellied cross troughs a little. They eat the cherry stones that birds discard. They wont eat bark or shrubs in my experience but will rub to scratch so that may knock over and / or destroy some young trees. You just have to try it.

Ducks prob ideal while forest is young if you have water. Even chickens may strip lower foliage. But protecting them is harder.

Peter Ellis
Posts: 1593
Location: Fennville MI
69
posted 7 years ago
Small trees and largish animals just don't make a good combination. Even if the animal has a strong preference for grazing over browsing, they may graze on a small enough tree. Or, as noted before, take it out scratching an itch.
I would look to geese and ducks. Geese are very much graders who will focus on grass (or why they love golf courses), and ducks will help with some pest issues, like slugs, while not being very destructive of young trees. Chickens scratch enough to be a threat to young trees.
When I get to where I have to make these decisions I will be going with geese and ducks in the baby food forest.

Karen Walk
Posts: 122
Location: VT, USA Zone 4/5
4
posted 7 years ago
Thanks for the feedback. I do have three adult Muscovy ducks. I like them because they are very friendly and quiet. One hatched seven ducklings, so the duck population will go up, but so far they are not big grass eaters. I have over an acre of grasses I would like to keep down without much mowing. I can't imagine how many geese that would take - I don't think that geese are an option because of noise.

Pigs are a possibility. I didn't think that they were major grass eaters, but a little more research shows that they can be when there are grass varieties that they like. I'd have to fence them a few feet off the trees for a few years while they get established. My main concern with pigs is that I am also trying to encourage a local snake population - and pigs like to eat snakes.

The attraction of larger animals is that there are fewer in number to manage and that I don't have to worry about predators. And while a cow won't protect chickens or ducks from predators, their presence has been known to reduce predator pressure on smaller animals. Sounds like cows would need to be fenced away from the trees until the trees can handle a good scratch and an occasional browse.

I agree. Pigs are not an option as they will girdle trees, pull out shrubs and cause much havoc. Chickens & turkeys will eat the grass but they'll also rip up any mulch you have put down.

I have a newly planted food forest & I might let the sheep in at the end of the season. Other than that, I have put mulch down to suppress the grass & planted comfrey and nasturtiums to suppress grass too. I occasionally go in with a cordless battery weed wacker or a corn knife to do chop & drop.

Trees need to be quite large to handle cows.

posted 7 years ago
Here's a pic from the Silvopasture group I belong to: 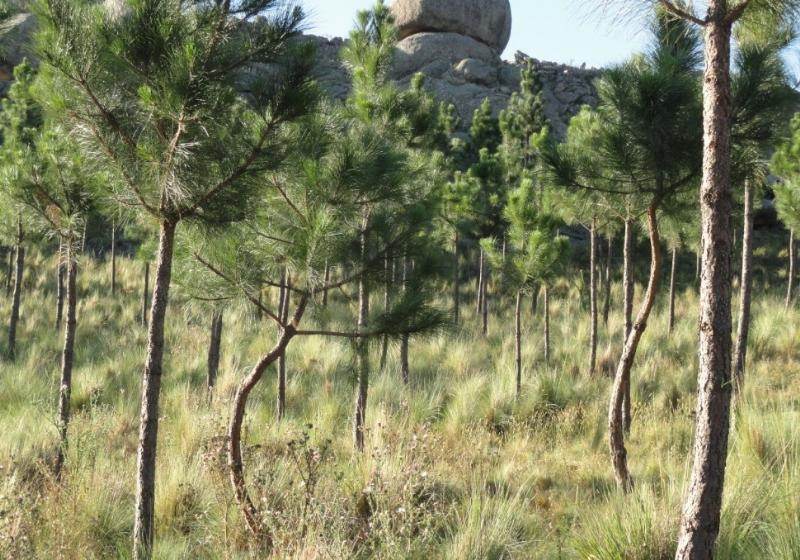 The trees were used as scratching posts by bulls during fly season.