posted 6 years ago
People are talking about winter coming up. Now is the time to prepare.

Last winter was cold (26 below). The previous three winters didn't get get below zero (at least I'm pretty sure they didn't). But still, spending a winter in a tent is far from comfortable.

I have been asked this so many times, I want to state it just to save my future self some time. This is my list of things that I think would be pretty quick solutions for staying warm this winter. Just to make sure you have a bunk through the winter.

70) Work harder than everybody else. Then you will get a bunk in the bunk room, love shack or wofati 0.7.

71) Build your own wofati. Sepp builds one of his animal structures in one day. That is about 240 square feet. Tim says that if the logs were there, he and another guy could build a 10x10 wofati in a weekend. I think it could be made faster by a variety of techniques. 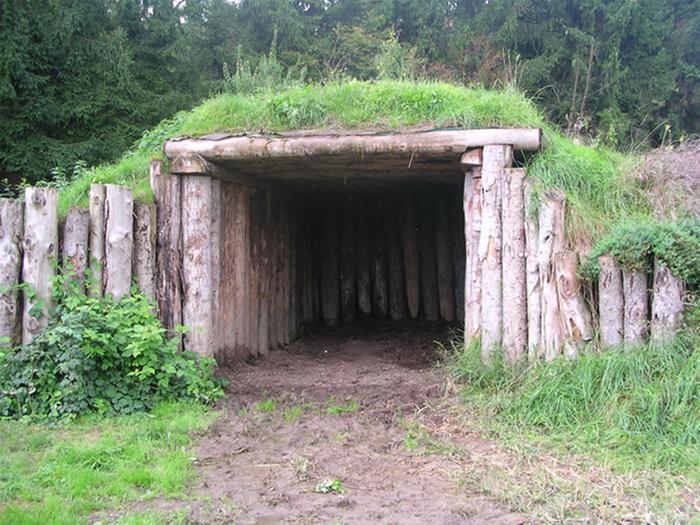 72) Build a debris hut. I'm told it would take less than a day and is super easy. 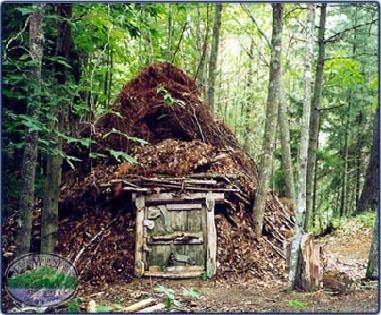 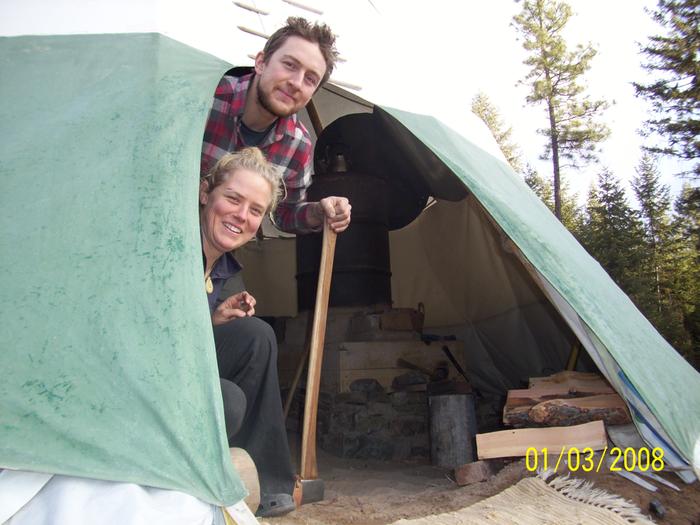 74) A gapper was here earlier this year and wanted to build a treehouse with a rocket mass heater in it. At first I thought it would not be possible, but after a lot of discussion, we came up with a steep spot on the volcano where if you built a tree house, one end would be close to the ground and the other end would be way up in the trees. The end close to the ground could have some support from the ground for a rocket mass heater!

75a) Last year we build these cool shelves for the auditorium. During the October workshop it got pretty cold and some people decided to set up camp in the shelves rather than in a tent. I wish we had a picture of that. But the auditorium does have a rocket mass heater. And while the current shelves are full there is a need for two more shelf units. Not only is this entirely plausible, but it would seriously meet my humor needs. 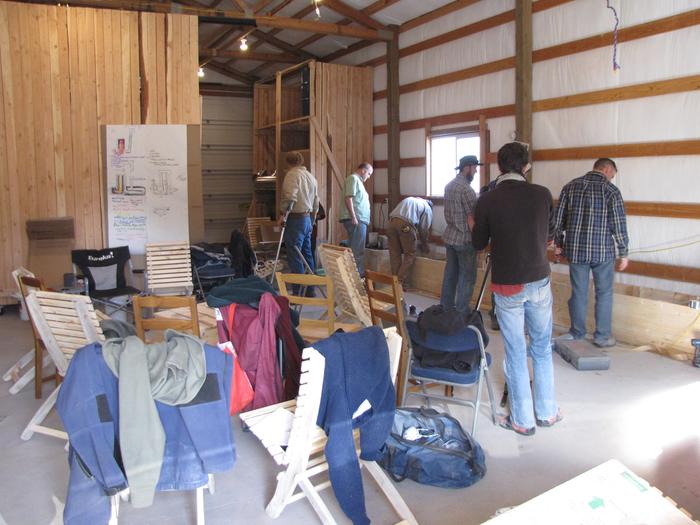 75b) There is a sort of "mezzanine" in the auditorium. The "floor" of that space needs some carpentry. And there has been talk of working in a solar tube or even a dormer. 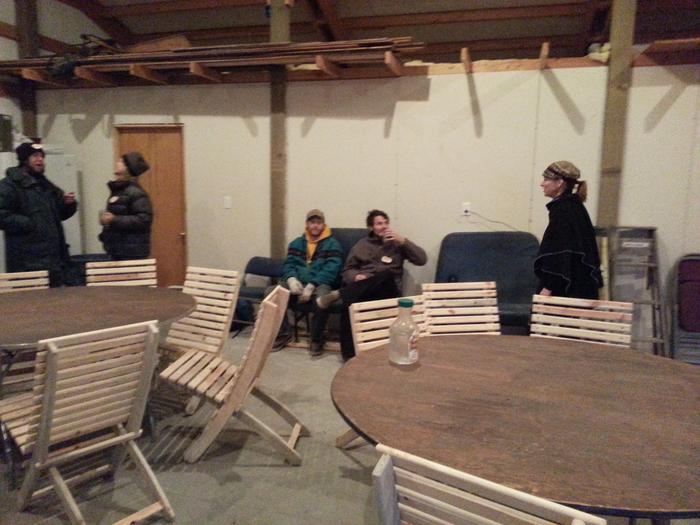 75c) the biggest concern for 75a or 75b is that once in a while Tim needs to do some welding in there. We have installed a huge fan to vent the space. And, if the rocket mass heater is running, that would be pulling a lot of air out of the space too. And, of course, the auditorium is used as a shop a lot. And about one night every couple of months, there will be a late night of work in the shop.

76) the porta cabin was built in a day. And improved several times. There might be about five days into it now. It has insulation, inner walls and solar. I think it is the smartest way to build a tiny house. Although I also think this tiny house is a bit rough. 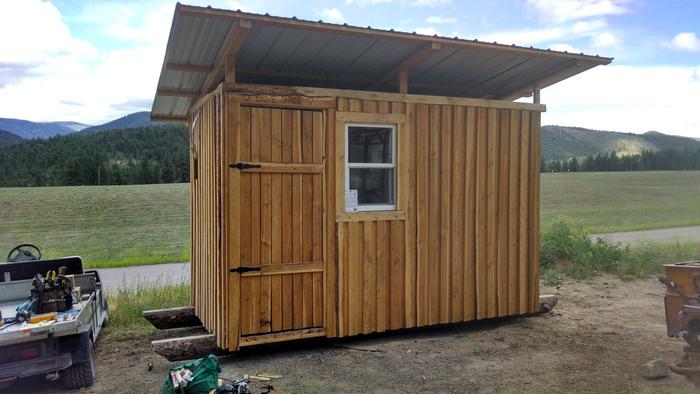 77) How about a tiny log cabin? We have lots of trees.

posted 6 years ago
If you have cob, get some bales, sticks, and build a bale house. Issue is to get non dusty, well packed and even sized squared bales. Then you put some chicken wire on it, cob/plaster it, and make a roof. Build a RMH inside and you can if the cob gods go along with you; you and a buddy can have the basic house up, branch and log roofed, and plastered in a day. It WILL be insulated. I have been in this state before, before I heard about RMH's at least.
William Halliburton
Posts: 8
posted 6 years ago
FWIW, Open Source Ecology is about to build a code compliant passive solar compressed earth brick house in five days with machines we built ourselves and bricks made from on-site soil.

posted 6 years ago
William, thank you! We have soil that if unamended is adobe clay; I am going to be chewing through that site on the other end of the link.
Chris Fox
Posts: 31
posted 6 years ago
About a year ago I build a very simple straw bale shelter. Pallet for "foundation, straw bale walls, 2 scrap windows. I got the inspiration from Straw Bale Shelters. I had an rv hook up on site so I used a window ac unit for cooling. For a couple of hundred dollars it worked out surprisingly well.
paul wheaton
steward

posted 6 years ago
Here is a possible idea.

Here is a picture of an 8x8x8 shed. Imagine stretching it out to, say, 16 feet long. And maybe making it 10 feed wide. 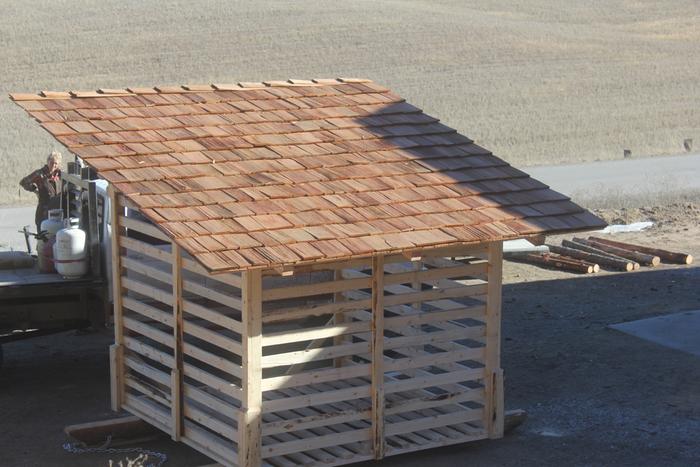 You could leave out the side wood.

Then you can stack straw bales along the edges. But put in a door frame and a window or two.

Straw bales are 18 inches wide. So it would be 7x13 on the inside. Bigger than the love shack. And straw bale. Maybe the floor would be solid and could have some sort of thinner insulation.

R Scott
pollinator
Posts: 3684
Location: Kansas Zone 6a
134
posted 6 years ago
You are going to be up against the clock already--Winter is coming.

Back here in the land of (almost) no trees, sod houses and dugouts were the expedient shelters of choice. Lots of people died when their dugout collapsed or the door was frozen or snowed shut, but lots more died from hypothermia from not having enough shelter. My father in law can still remember people living in dugouts towards the end of the depression in Nebraska. Straw bale houses were upscale then.

posted 6 years ago
I would do a search on Craigslist for "yurt" every so often. A tipi is more indigenous, but I think a yurt with a rocket mass heater would be comfy indeed.

posted 6 years ago
Nice picture, Paul. How was that one finished off?

I do thankfully have home for the coming winter, but will be taking many measures to make it easier to heat. Walipini are being done next spring; so. (mostly got injured and way behind schedule). Just that I had seriously looked into Earthships and bale homes several back and almost built a bale home about 2000... and in a few days you might be able to put one of those up to make the winter.

And Paul, is that one made of recycle pallet, or...?
paul wheaton
steward

When you say "that one", I think you are referring to the wood skiddable wood shed? What you see is complete. I threw that out there with the idea of making a skiddable shed and then throwing some straw bales in it to make a tiny straw bale home.

posted 6 years ago
Yes, Paul, 'that one' seems to be the 'skiddable shed'. Talk about a great idea.

I finally talked spouse into TWO hugelkulturs, they're still being built. Hehehe.

Loving this site more and more. And thank you for the replies, I know you're a busy dude, Paul. (Did love the award vid from Sepp Holzer)

I still have a hate/love affair with bales. I made and tossed my share when younger, now they are so (deleted) useful. You can build insulated homes; insulate perimeters; stand them on end and grow potatoes; put up a few pallets so your intown neighbors can't see and make a pee-bale compost...

I just like the idea if you are being strapped for time, doing the spike/bale stack quick shelter...
Enrique Garcia
Posts: 94
Location: Las Vegas, NV
posted 6 years ago
I took a class in Austin on earth bag building & the teacher, Thea Bryant, was starting to use Onion/Potato bags & preferred them to the expensive Polypropylene bags which is what adds all the cost to that kinda project ... they worked great !! Crazy cheap too .. just add earth + 10% aggregate .. tho if you have more trees in that area ... not sure the time it takes to ready those ...
Jason LaVoy
Posts: 20
posted 6 years ago

I had an (untested) idea to build a simple log cabin like this, then cob the inside six inches thick to chink the logs and add thermal mass.
Justin Jones
Posts: 55
Location: Lake Arrowhead, CA
9
posted 6 years ago
I am currently working on a debris cabin for base camp. I've posted initial design ideas at the debris hut thread: https://permies.com/t/36878/ancestral-skills/Debris-Hut#299395

Every day, every season there is change, something new to observe, and constant learning. Permaculture has the dimensions of a life-oriented chess game, involving the elements, energy, and the dimensions of both life-forms and building structures (also with political, social, financial, and global implications).

Once i get things sorted and am able to get out there as a gapper i am sooooo groovin on doing this (:

Rebecca Boshemian
Posts: 7
2
posted 6 years ago
74) A gapper was here earlier this year and wanted to build a treehouse with a rocket mass heater in it. At first I thought it would not be possible, but after a lot of discussion, we came up with a steep spot on the volcano where if you built a tree house, one end would be close to the ground and the other end would be way up in the trees. The end close to the ground could have some support from the ground for a rocket mass heater!


Have you folks heard of a dude called Michael Garnier, who did a bunch of experimentation to develop an artificial tree limb that can hold in the neighborhood of 8,000 to 9,000 pounds? He also has a heavy duty limb that he claims can hold something like 23,000 pounds. This is of great interest to me, since I'd like to put a RMH in a treehouse built on 4 trees outside Portland. Surely that's enough of a weight carrying capacity to allow for a RMH in a tree? Thoughts, anyone?
paul wheaton
steward

Photo from the link above. 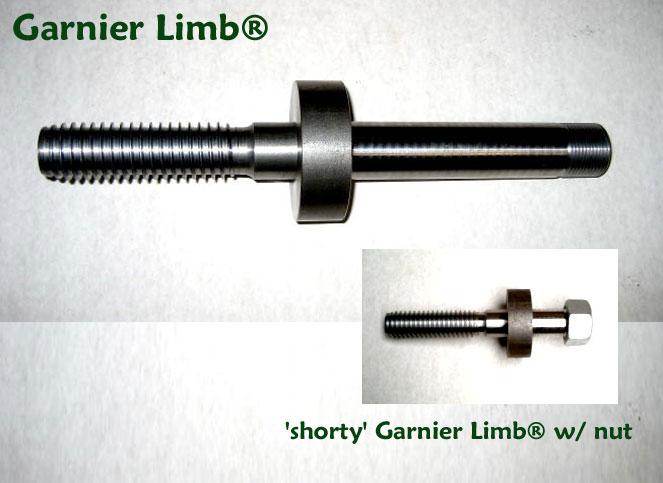 The image below is from the wikipedia page Treehouse attachment bolt and shows the artificial limb growing into the tree over time.

Eugene Rominger
Posts: 21
Location: Paso Robles,Ca
1
posted 6 years ago
If you ever find your self in southern Oregon with time to kill stop in for a tour and\or ride the zip lines.
Or better yet stay few nights sleeping 40' in the air.
if you have any plans to build anything resembling a tree house talk to Mitchael first.

J.O.T, DYI level 7.5, Maker of stuff and curmudgeon in training

Rebecca Boshemian
Posts: 7
2
posted 6 years ago
I have indeed spoken with Michael. He speaks with authority about tree houses in general, but since he's not familiar with the rocket mass heater, he can't really offer an opinion on whether or not I would be able to install one in a tree house.