Angelika Maier
pollinator
Posts: 1456
Location: cool climate, Blue Mountains, Australia
23
posted 8 years ago
Ages ago I saw on the web a fully enclosed soldier fly breeder. This could be a nice project for my husbands birthday, which would be a doable task for me.
Do they work at all?
Which is the best setup? What are your experiences with the soldier flies?
And were do you get the flies from?
(Breeding cockroaches the big ones would be even better they are nice and crunchy)

posted 8 years ago
Do you mean the BioPod?- http://www.thebiopod.com/

I've no personal experience, black soldier fly not seeming to be too widespread in the UK.
Angelika Maier
pollinator
Posts: 1456
Location: cool climate, Blue Mountains, Australia
23
posted 8 years ago
No it was something you put together with these white buckets and some tubes.

Nicola Savio
Posts: 8
Location: Lessolo (To), Italy
posted 8 years ago
Hi, I'm working on an enclosed system to breed Black Soldier Fly in order to get the maggot, the leachate an (possibly) the compost getting rid of the pig manure all at once.
Now I have finished the pod and I'm looking to get my first bunch of maggots from a friend so I don't know if it will work...
Anyway if someone has got some advice I will be very pleased to listen...

Have a good life
Nicola

BSF.jpg
Christian Kettner
Posts: 73
Location: North Carolina, near Raleigh
4
posted 8 years ago
Hi angelika..looks like a pretty cool design in the photo...I have had soldier flies for two years now and they seem to really stick around once they get established..
You can buy larva at pet stores or pet food suppliers but they go by a different name, but an easy way to get some going right now before you build a breeder can b easy..it worked for me.
Just put half a cantelope (skin on) in a sneeky spot out in your yard..observe it daily..you may notice a soldier fly or two hanging out on it after a day or two wait a day or so after you notice a fly and then transfer it to your soldier bin or temporary bin or bucket as the cantelope skin is a perfect egg laying medioum for the flies and they seem to love melons and cantelope.
I have been using a super simple system in a plastic storage bin and I used. PVC pipes laying on an angle and long enough for the pipe to protrude and the larvae to fall in a bucket....it was a little too simple for something that I would make as a gift for someone but it worked And the bin also contains d worms that would live hqmoniously with the larvae and keep composting through the winter when the soldiers went dormant...I use the larva to supplement the diet for tilapia in an aquaponics system ....
The system in the photo looks really good as a system that could also be used indoors if the exit tube led to a container....it looks like it is a sealed system and you wouldn't have flies hovering around the house...soldier flies are very docile though and do not bite or bother people.

Christian Kettner
Posts: 73
Location: North Carolina, near Raleigh
4
posted 8 years ago
A system can as simple.or complicated as you want...if it just for feeding livestock you can use any container.....just search you tube for soldier fly bin and you will get ideas for building one...it can be spatially open so the flies can get in to lay eggs...and some sort of ramp leading from the surface out..some like to have the ramp near the edge because supposedly the larvae circle the perimeter to find an escape route once mature.
Burra Maluca
Mother Tree

posted 8 years ago
From what I understand, black soldier fly will mate while flying, and I'm not sure how high in the air they are when this happens.

The behaviour is called 'lekking' if you want to research it.

Yes is a semi-sealed system. I would like to be sure to grow a good community. My plan is to compost pig manure and humanure, feed chicken and ducks with the pupae and be sure to have a stable colony of BSF around. I've seen some but not so much, probably it depends on how cold winter is so I prefer to have an enclosed back-up.

Thank's for the hint! I will make some research. The only thing I found is that BSF need light to mate and, probably, some leaf or grass. To be honest I've picked up the design idea from the Austrian Designer Katharina Unger
Probably they will need more space...

I'll keep you up to date when the maggots arrive...

posted 8 years ago
Anybody breeding them in a junked freezer?
Seems like a good fit, may need a lightbulb heat in the winter,
may not.


Eating Bindweed
Eating Buckwheat Greens
Paul explains why I spend time here,better than I could myself.

William Bronson wrote: Anybody breeding them in a junked freezer?
Seems like a good fit, may need a lightbulb heat in the winter,
may not.

I would have concerns about them overheating in the warm seasons. The critters generate quite a bit of heat, along with everything else they do, and will start trying to get out if the environment gets too warm for them.

posted 8 years ago
My wife just bought a Bio-Composter from blacksoldierflyblog.com. It had great reviews and was a lot cheaper than the Bio Pod. I told her I could build one but she just laughed and pulled out the Honey-do list.
Nicola Savio
Posts: 8
Location: Lessolo (To), Italy
posted 8 years ago
Hi to all,
Well, I have an update about our BSF bin:
we have colonised it with 1000 maggots and everything seem quite nice (they are devouring alla the stuff some friend of our had in a fridge that broke down during the summer holiday)
but... we have some problem with the landing board to the collection jar: the maggot don't just migrate on a 35°-40° degree surface but they can just take a walk upside down spreading on all the inner sides of the bin.
Now we have to find a tweak... any suggestion?

In the photo: the 'landing board to the exit' 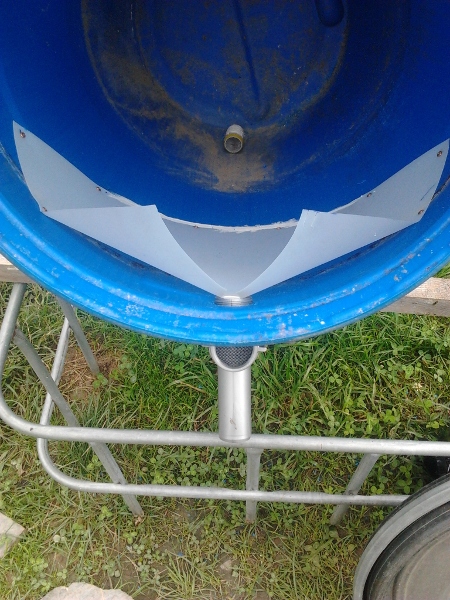 posted 8 years ago
Do they go towards the higher points? If they have any preference at all you could use pcv tubing or some kind of hose, piercing the 55 gallon blue drum at strategic points and all leading to chickeny doomness...
Or if there is anything they can't climb or won't cross use that to corral them in the right direction. Velcro tape, copper wire,aluminium foil, petroleum jelly, petroleum jelly mixed with hot pepper, salt, onion/garlic juice, etc.

Nicola Savio
Posts: 8
Location: Lessolo (To), Italy
posted 8 years ago
Good tips! Thank you. I will try something to corral (probabli velcro or such things).
For now they seems to have slowed down due to a few cool night... we will see...
Thank again!