Introductions! I, our land and community...

Joshua Chambers
Posts: 71
Location: the state of jefferson - zone 7
posted 10 years ago
Hello all you permies!

I must say that I have been really enjoying this site, and all you delightful people on it!  Since there's no designated introductions thread, I hope you'll excuse a touch of background.  I promise I'm here to talk about our land, and the permaculture possibilities here!  I'm excited to share this site with you and hear the and ideas and discussion!  I took a bunch of pictures last week, to show you all.  :)

I have, my whole life, been obsessed with the way we live.  With intentional community (I was way into BF Skinner), food forests, energy systems (Viktor Schauberger, et al.) and alternative construction (for a long time now, underground construction after Barefoot Mike's book and many others), and all the rest of sustainable living.  I'll call my dad a "new age academic" with a good dose of sci-fi in there (I grew up on Heinlein).  When I found Fukuoka and Holzer (a year or two ago!) I was in love.

So after a while on the road with the Rainbow Family, running a little library in the woods, a small tribe formed around it, and we planned to live the dream, to buy land, and plant food forests (at least that was my vision!).  We eventually stumbled into a fantastic little town, a lush backwoods spot, between Shasta and Lassen, who's logging and dam building boom left the town with old foundations and fruit trees and a big school, now down to a few hundred people and a handful of kids in the school.

We have 90 acres on the south-west face, and a half mile by road from the base (and river) of a mountain called Chalk about a three mile drive from town (closer by river).  On the other side of the mountain, there is a mine, where they mine diatamaceous earth (DE!).

In town they call us the rock pile, the reason which the pictures will show.  A touch under half of the property is covered by an old rock slide.  There are two major kinds of stone, though there is great variety of each kind.  One is a heavy rock, which breaks off in beautiful flat pieces with all kinds of corners and right edges, ideal for building!  There is also volcanic rock, in lots of different colors, very light and full of holes.  I don't have a definitive explanation of how or when this formation occured, though I feel certain that the rocks came down from above, maybe off the now characteristic chalky face (shown in the pictures covered in the snow, and a DE deposit) or maybe from the nearby volcanoes.  Both would explain the variety.

So stone is our first major resource!  These rock slide areas are big, too, and so very hot and in full sun.  They hold heat for a time, too, and are a home to lots of wild-life.  With the slope of the hill, I think they seem just perfect sites for large in-ground structures, even built partially out of stone, covering their roofs with soil!  I had always planned on earthship style buildings, with small geodesic greenhouses towards the back to let in light (I have a hoard of books on underground houses), I hadn't looked at Oehleresk designs (as discussed in Paul's delightful wofati artlce) for some time.

Our water comes from a very large and beautiful natural spring coming right out of the side of the mountain, about on the same elevation as the top of the property.  There is a creek running through the opposite corner of the property, though there was a water war some decades ago, and it's a touchy subject with some of the neighbors there, so we developed a different spring, the next ridge over.  This is a great placement, really, because the water line  is long, and runs like a backbone right down the middle of the land, and off of it we have branches.  We have a 2" a third or so of the way, then 1" and we're going to run a second 1" to a different area where we are developing.  We're learning a lot about water systems, and have plans for a buried copper line some day when we can afford it and have a big digging machine!

We absolutely need a backhoe or excavator to dig terraces, move stones, dig ponds, everything.  However, there is an absolute slew of old logging roads, so we are able to drive over halfway up into the land, and with a machine, we'll be able to work the rest into action, so we have good access.  Even my little 4wd car drives our crazy rocky road!

Our summers are very hot and dry, and our winters are rather wet.  The climate has, it appears, been changing.  Apparently (according to locals) even 20 years ago the winters were frozen all season, lots of snow, very cold and full.  Now, the winter is... mild.  It snows, sure, several feet last year (though this winter has been even MORE mild than usual) and yet the sun is out it seems over half the days through the winter, and everything melts, and thick snow condenses into this very tough almost-ice.  This year it's mostly rain.

Everywhere on the land that isn't rock-slide is a dense woodland/forest.  The last bout of logging was done some twenty-something  years ago, and it seems VERY overgrown and thick!  Most places you can barely walk through it.  The major tree species we have are cedar, several kinds of pine and fir (still learning them all), oak, dogwood and broad-leaf maple.  There are two kinds of oak on the land, which apparently no one ever really mills or uses, and they used to just leave them, so the oaks are HUGE.  One kind is live oak, with prickly leaves that everyone thinks is holly and some of which hold their leaves a long time through the winter, though brown.  The other kind may be called red oak, which are lovely and more normally oak-ish, producing copious leaf-mulch!  In the shrub layer we have red root (produces a soapy flower in the spring and early summer and has a medicinal root), red bud (nitrogen fixing!), and in the sunny spots, lots of manzanita.  There are some spots where you can really see the forest succession pattern, with old rotten manzanitas under the now enormous shady thickets, where the shrub layer has been suppressed, and all that can grow is poison oak (PO), and some other great medicinal forest herbs including wild ginger, oregon grape, also raspberries and wild grape!  Lots of large mammals too such as bears, all sorts of cats (ringtails, mir cats, feral cats, bobcats, mountain lions...), skunks, etc.  Quite a diverse ecosystem!  ;)

While in the forested areas, the soil looks and feels very good, and soft under your feet, I'll certainly admit in most spots it's pretty rocky digging, however there IS dirt under the soil, and even under lots of the rock-slides!  The composition of this dirt is primarily a silt (volcanic?) that can masquerade as clay, with almost no real clay at all.

It's very big and diverse, with lots of micro-climates and such.  I'm finding it overwhelming to think about more than just one zone at a time, planning food forest patches of all kinds!  I can't quite see how to embed my attachments in the post, so I'm going to make replies with more pictures plus blurbs.  :)

In my opinion, as important to permaculture as the food forest, is our social infrastructure and the behaviours of our culture.  Our economic and social environments need the sustainability and sanity that we seek in our plant polycultures.  This is why the vision for this land is one of intentional community.  We began with zest and little but the Rainbow "welcome home" attitude and a consensus circle, which reminded me that our alternative culture is as broken as the mainstream one.  So it is our task to create a culture that works for us, and our children and their children and can continue to do so permanently!  ;)

So at the moment we're seven adults and six children nearing some real agreements and social structure, explicit membership and an economic system!  It's an exciting time.  And since we've moved here, our little town is changing.  Some permies have and are moving into town, including some slightly mysterious group buying up large swathes of down town, including the big hot springs, and there is rumour of an eco-village on the epic old down town farmstead they just bought.  Here, we have a great chance at critical mass and a real LOCAL economy!

Sorry, if that sounded like an advert, I hope you'll excuse my enthusiasm!  :)

Thanks for the great forums!


afternote:
argh, my attachment is NOT more than 5mb, and yet still it fails... hmm... pictures to come in replies!

tel wrote:
any chance the hot springs folks are the Avalon Springs folks?

I just asked, and it's not them, though the brother I'm talking to says he's been there.
Joshua Chambers
Posts: 71
Location: the state of jefferson - zone 7
posted 10 years ago
Here is one of the lower rock slide areas, about a third of the way up the property, and in the background is the snow-covered chalky face of our mountain!

Okay, this one worked, I guess it just doesn't like 3 meg pictures!  I'll scale some down.
HPIM3181-(Modified-in-GIMP-Image-Editor).JPG 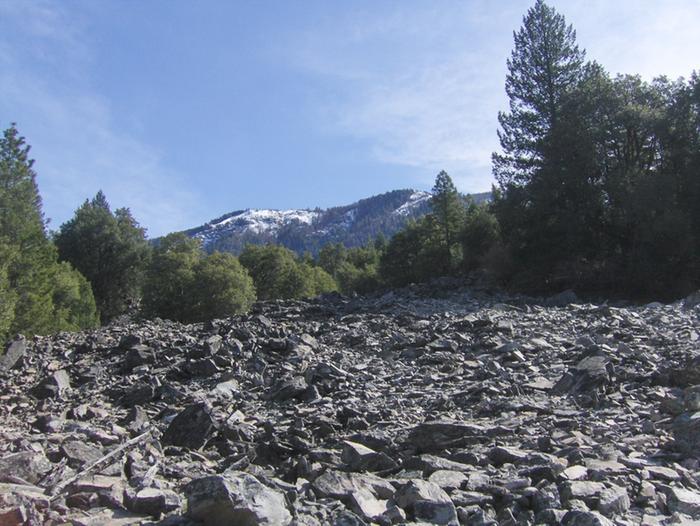 Joshua Chambers
Posts: 71
Location: the state of jefferson - zone 7
posted 10 years ago
Here's three simple raised beds I made last year and put dripline on.  I didn't import any soil for it.  Seeds germinated fine and then when they started really growing, just yellowed and died, stopped growing.  I found some fish fertiliser and put it on, but it was too late to get a harvest... Also the fire and our water line going out definitely had something to do with it.  I did harvest FIVE black beans, which should be very hardy and drought tolerant, eh? 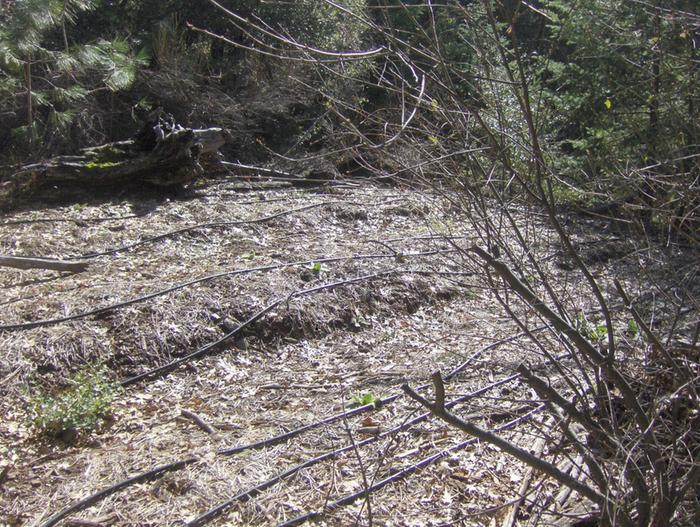 sure wish i had some of that rock..our property is more lowlands and we have very little rock and i'm a rock lover..

will be interesting to see how your community progresses

Posts: 211
Location: Northern California
posted 10 years ago
Very neat, Joshua. Sounds like you have microhydro waiting to happen, since that water's coming downhill anyway. It sounds like your community is doing great work, and I'll be really happy to hear about your successes. How long have you been living and working on this patch?

(Tangent: Stone, the abundance of or lack of... It kind of reminds me of Settlers of Catan, that game where you build towns and swap resources--stone is always big toward the end of the game, although at first you want sheep and wood and wheat. For some reason you can build a bridge out of wood and sheep. I don't know why. Maybe you use the sheep as floats. I'd love to see a permaculture version where you cooperate to use limited resources most efficiently together, rather than compete to control them. Maybe I'll design it...)