posted 6 years ago
This was pretty funny and educational at the same time.

David Livingston
pollinator
Posts: 4328
Location: Anjou ,France
242
posted 6 years ago
Thanks for that I am a big fan of owls and will be making owl nest boxes in the summer . They are the good guys on the farm .

It just talks about shrimps

David Livingston wrote: I will be making owl nest boxes in the summer . They are the good guys on the farm .

I agree David, i would like to add owl habitat on our farm too.
any links you would suggest for a simple owl box? do they need to be area/breed specific?

video works for me -
i like how the they disguise themselves when young, lol

http://mdc.mo.gov/discover-nature/outdoor-recreation/woodworking/build-barn-owl-nest-box
Barn Owl are very good at mice vole And rat control And are found world wide often quite close to human habitation a couple of Boxes wildly placed should do the trick one pair Will make a big dent in the rodent population

Posts: 7926
Location: Currently in Lake Stevens, WA. Home in Spokane
316
posted 6 years ago
Here is a great resource for building a variety of nest boxes for a dozen species of birds (including barn owls):
Cornell: Birds nests (Dead link)

EDITED to update link: Archived link
Dan Miller
Posts: 4
Location: Tennessee
posted 5 years ago
If I can post this pic, it is a pic of my latest owl house. I have four at my place and this one is for my brother.

David Livingston wrote:Thanks for that I am a big fan of owls and will be making owl nest boxes in the summer . They are the good guys on the farm .

Yeah when they aren't ripping the heads off your poultry. We had an owl fly over the head of my husband when he opened the door to the barn even though he also had our great pyr with him. Flew over his head to get to the chickens which were caged up inside. We have Satan's owls breeding on our property.

posted 5 years ago
A picture of Satan's owl.
Owl.jpg 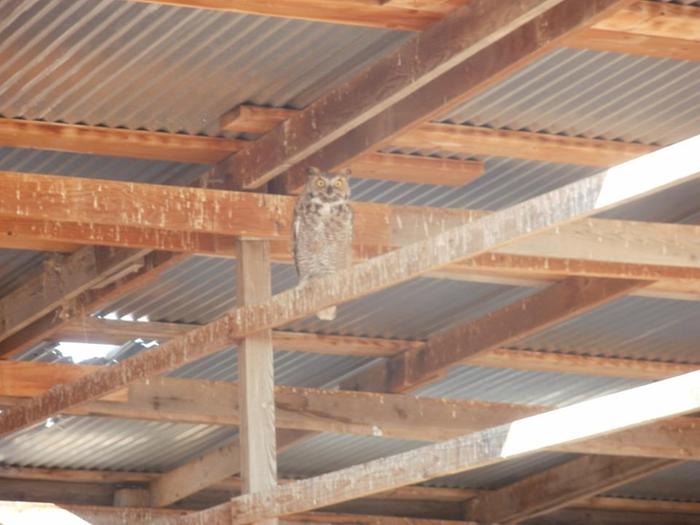 Dan Miller
Posts: 4
Location: Tennessee
posted 5 years ago
That owl has a pretty innocent look to him. I'd say he was framed. But seriously, my owls are screech owls and too small to take on a chicken. If I can get a pic of one of them peeking out of the box, I will post it.
elle sagenev
pollinator
Posts: 2130
Location: Zone 5 Wyoming
223
I like...

Dan Miller wrote:That owl has a pretty innocent look to him. I'd say he was framed. But seriously, my owls are screech owls and too small to take on a chicken. If I can get a pic of one of them peeking out of the box, I will post it.

They gave us months of hell. lol Day and night they would sit on the fence trying to get chickens. We haven't had a problem since then, though we know they are around, and I credit the peacocks for that. That day the owl flew in over my husbands head our not even 1 year old male peacock decided to test out his attitude. Now that he's 2 and fully mature he's very very large and very very territorial. So I credit him with keeping the owls away from the barn. We still see Satans owls around occasionally.

posted 4 years ago
Since John Polk's excellent link to nest box plans for many species (including owls) is broken, here's the Internet Archive version:

Dale Hodgins
Posts: 9002
Location: Victoria British Columbia-Canada
666
posted 4 years ago
A very small owl has learned that when I cut branches and dig, small creatures often skitter away. The owl took to lingering on branches about 15 feet above me and usually about the same laterally. Several mice and small birds were pursued last summer when I was making road improvements.
D Nikolls
pollinator
Posts: 1294
Location: Victoria BC
156
posted 4 years ago
I've had an barred owl do that when I was dragging hugel wood up out of the gully. Not so small! Watched him take a mouse and then fly straight into a branch, lose the mouse, do a flailing flip midair, and somehow recover faster enough to land on the next branch down. I cracked up, and he stopped shadowing me after that...

We liked the great horned owls better, but they've become scarce over the last 20 years, with the barred owls moving in, in what seems like much great density... though this might be due to the much greater racket they make, and their less reclusive behavior...
Burra Maluca
Mother Tree

posted 4 years ago
I'm not sure what species of owl they are, but three times in the last couple of weeks the local owls have decided to hold parliament around my farm. I'll swear they'd arranged themselves on the stone wall around the top two acres and were attempting to put the world to rights with their great, long discussions about whatever it is that owls hoot about. Each had a unique voice, and by the end of each night I had a pretty good idea of which direction each one was in relation to my bed. One particularly loud one seemed be almost right behind me.

It was quite an experience. I do wonder what it was all about though.

posted 4 years ago
Nocturnal owl hooting can be a negative when you are trying to sleep. The past few years, around this time of year, we have had the same thing happen to us.

In our case, it was the Great Horned Owl:
https://en.wikipedia.org/wiki/Great_horned_owl

All the racket was mating season. They are pretty dang big birds in this neck of the woods, and when you are trying to sleep, they are also quite LOUD.

This site is an amazing resource for bird calls, so there are samples for what we were hearing:
https://www.allaboutbirds.org/guide/Great_Horned_Owl/sounds

We have a large population of many different types of raptors where I live, so our chicken coop has stayed empty so far.

I have a local farmer friend that swears an owl can wipe out much of a flock in one night. Eating mostly just the heads...

Anyone have any good way to keep the daytime raptors like Redtaill Hawks, and the evening raptors, like Great Horned Owls from eating their chickens?
D Nikolls
pollinator
Posts: 1294
Location: Victoria BC
156
posted 4 years ago
While I was interning in 2014, we lost a couple muscovies to a bald eagle.

The flock we lost them from was in a fenced 1/8th of an acre. Much of it had some cover; tall grass, and a bunch of young bushes/trees that were individually fence-ringed to protect the roots from the ducks.

The most exposed area was around the hutch, and a long narrow lane from the area around the hutch to the portions with more shelter. We ran a 6-foot wide strip of snow fencing, the bright orange plastic stuff, up in the air like a canopy, over this part of their enclosure. No more trouble after that, at least not that year.

We lost chickens fairly rarely, even though they were free-ranging larger areas including open fields, often far away from people. The roosters were very vigilant, watching the sky and calling all their girls under shelter if something scary was spotted. The muscovy drakes could care less about this stuff.
Tracy Kuykendall
Posts: 165
2
posted 4 years ago
Listening to the owls hootin' around the place at night rates right up there with a fire in the fireplace. But don't kid yourselves, out here in the oilfields storage tanks make for handy spots for them eat their catch. I've found skunks-rabbits-domestic cats-turkey poults, I've come to the conclusion that they're like any other predator, if they can wrap a lip around it, they'll eat it.
Mike Turner
pollinator
Posts: 432
Location: Upstate SC
45
posted 4 years ago

Lazlo Rose wrote:
Anyone have any good way to keep the daytime raptors like Redtaill Hawks, and the evening raptors, like Great Horned Owls from eating their chickens?

Keep bushes (blueberries) and bamboo groves spaced around the areas where your chickens roam so that they have only a short distance to run to get under one. Bamboo groves are especially good chicken protectants since their closely spaced canes act as a sieve against aerial attacks and the maze of canes can also deter the movements of any terrestrial predator larger than weasel sized (the chickens have no problems moving around in them). Chickens love bamboo groves and spend a lot of time in them, not surprising since their ancestors were native to southeast Asia, an area with lots of bamboo. Bamboo also acts as a magnet for a lot of smaller birds, which roost overnight in the groves and fertilize it with their droppings, stimulating earthworm activity which the chickens also enjoy.