Deer and Animal Proof Your Trees and Plants

Very easy to do too... they don't seem to want to walk on it.

I have also read of chicken wire being laid down to achieve the same result.

Chelle
Rob Sigg
Posts: 715
Location: PA-Zone 6
posted 12 years ago
That is actually a really great idea, has anyone in these forums tried it?

Pat Maas
Posts: 196
Location: McIntosh, NM
posted 12 years ago
Don't have deer here, but do have quail, crows, numerous birds that love to pick up freshly planted seeds,cottontails and jack rabbits, gophers, voles and occasional melon loving coyote or porky in the pumpkins.

Love using chicken wire around newly planted trees. Daffodils planted in the tree wells. Pieces of pipe cut in half and the appropriate size and length wired together for really persistent cats shredding tree bark. Chicken wire stretched and stapled onto frames over raised beds.

Will be using more row covers to keep the birds out of freshly planted growing areas they tend to bother more.

Will also be adding more bird friendly crops/trees/bushes away from planting areas.

For me having anything on the ground is a recipe for disaster-guaranteed I'll find it when not paying attention and whoops.

posted 12 years ago
I like this idea, and as soon as I can try it out I'm going to.  I have an area where cats have been visiting.... hopefully that will stop!

I already know, from experience, that wielded wire on the ground won't stop ducks.
Or maybe it's just my all-terrain ducks

Chelle Lewis
Posts: 428
Location: Hartbeespoort, South Africa
3
posted 12 years ago
Jami, perhaps chicken wire loosely laid for the ducks?... just a thought. what kind of ducks do you have?

We have antelope here that it would work with... the footing would be too insecure and they are very skittish. I actually love seeing them... it is such a rare occasion.. and usually I hear them first on the fallen leaves at night and have to peek out with no lights on. But I have porcupine that just loved munching up my new hibiscus down at the pool. Who would have thought hibiscus would be food? And a young avo tree.

This will not work with monkeys though... but I know now what will.

My neighbour with electric fence and dogs had no monkey troubles... but now he has taken the dogs up north with him while on contract. All the corn.. etc... gets raided now... even with the electic fence still on. So it is the dogs that make the difference. I have been asking around and this is proving consistent.

Just to decide on which dog now...  I think I want an LGD. Not sure which one though. .... Needs to be able to handle our heat.

Cyara wrote:
Jami, perhaps chicken wire loosely laid for the ducks?... just a thought. what kind of ducks do you have?

I have Indian Runners, hand raised, and fearless.  They assume the yard is theirs.  I've had to put wielded wire around plants I want, or at least in the beginning of spring growth so they don't get trampled.

I know the chicken wire won't work with them for barrier protection.  To reseed the lawn I throw down the seed, lightly cover it and lay down some chicken wire.  As soon as I move off they are on it

investigating my work.  The wire keeps them from moving the dirt/seeds with their bills.

I'm sure it would work if I electrified it, or cut and turned up the sharp pieces of wire, but this is to much work....

Thanks again for the great tip!

To monkey proof my plants I have decided to go with the Anatolian Shepherd Dog. They won't raid my livestock while chasing monkeys away.... I think. Hope their presence is enough to discourage the monkeys.

Still want to learn if it is only sheep they guard.... or all livestock. 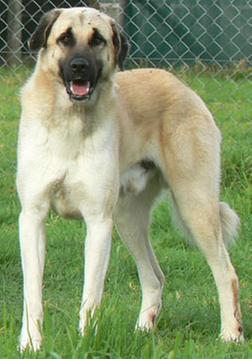 Pat Maas
Posts: 196
Location: McIntosh, NM
posted 12 years ago
Cyara,
It depends on what they become accustomed to as pups. They will protect what you introduce them to and bonded with as small pups. I have 5 LGD's now with my goats and wouldn't trade them for anything.
Buy from a reputable buyer and preferably from someone with dogs from like conditions to yours. Check references as LGDs from line to line are not the same. You want working parents-not show dogs.
I know you do your research, so on something this important you might want to look at two dogs. It prevents a single dog from being ganged up-which is a good possibility if you have enough monkeys.
Here I use the dogs in pairs or trios as with packs of dogs, coyotes and occasional bears, mountain lion and bobcat  this is needed.
Have seen first hand the "damage" one dog can do, but also know if my old fella Buster had help at the time it likely would have never gotten to that point. He tore up a pit bull.
When you have working dogs-LGDs- predators have a tendency to stay clear. Even the ravens/eagles don't mess with the little ones here as my dogs look up constantly and the bigger birds know that.
Chelle Lewis
Posts: 428
Location: Hartbeespoort, South Africa
3
posted 12 years ago
Wow, thanks Pat. So you have this working for you already. Great advice. Much appreciated. I had planned on 2 dogs to start... glad there is an extra reason for that.

How young must they be to bond? Usually only able to acquire pups at 8 weeks.. is that young enough? I downloaded a manual last night on how to train them... haven't yet had time to read it but will. Hope it is good.

Did you train your own dogs?

Chelle
Pat Maas
Posts: 196
Location: McIntosh, NM
posted 12 years ago
Cyara,
The earlier the better. I almost lost my bitch(bit by a young rattler) when the pups were a couple of weeks old so they probably started a bit early at 4 1/2 weeks. Had them in with the goats, but in a separate pen.  By the time they were 8 weeks old they were in with the goats full time.
Ideally 6 weeks, but 8 weeks will do. Just keep them separate to start until they get used to your livestock.

Their sire Buster kept them in line. I just did the collar training which is a must along with basic obedience training(helps when it's time to get shots or spaying/neutering, or....) Just be patient on the obedience training-these dogs don't take to being man handled-slow, easy and firm is best.
Read, read and do more reading and ask questions every chance you get to someone your way with LGD's.
It's a human learning curve as well as the pups.

Will make another note here, if you can, hold off on spaying/neutering until they are a year and half old. This will allow for their bodies to mature sufficiently and to gain the bulk needed when duty requires.
Some would disagree with me, but when you have big and bad for them to deal with, they need every advantage you can give them until you can lend them a hand. Hungry, hurt predators will ignore common sense and your dogs will have to deal with it.
misc-pictures-from-farm-046.jpg 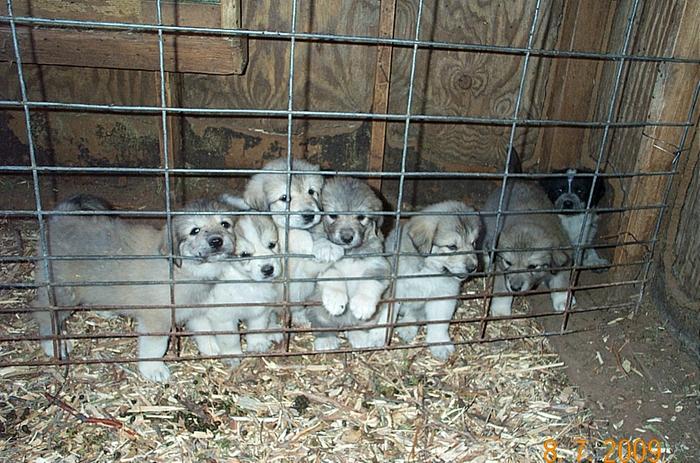 we have the coyote, occassional bobcat, big birds, etc... problems here on the farm, too, including the neighbor's, down the road, long horns (cows). we've usually kept two to three dogs on the place at a time.

the last two we rescued from a shelter. one was a collie mix about 3 years old, and the other a collie/healer mix 6 weeks old. all our 'kids' have been mutts and rescued from one situation or another.

they have learned very fast here. i teach them hand signals, and ed teaches them certain words and they do a great job of chasing the long horns just off the property then coming right back. one biggy is that they all had a natural instict for herding in their breed.

they bonded with our ducks, chickens, and goats almost immediately. we had one shepherd dog that the chickens and ducks would sleep around during the daylight hours. amazing something that big could be so gentle with something that small.