Attempt to make biochar with a rocket stove

Mike Daniel
Posts: 18
posted 6 years ago
I created a J-tube using 75 firebricks. Recently I used perlite insulation held in by cinder-blocks to insulate around the heat riser. The rocket stove is working wonderfully, the fire is burning sideways and is reaching high temperatures. On top of the rocket stove I used two bricks and some angle iron to elevate an oxygen limited retort right above the heat, around that I place a 55 gallon drum with the bottom cut out and a chimney on top to create a stack effect. The biomass placed inside the stainless steel retort did not char, I was certain that some of it would. Any advice on this? I did do some further research and saw that stainless steel is very heat resistant, and Im starting to see that it may not have been the best option.
Kiln-with-CMUs-007.jpg 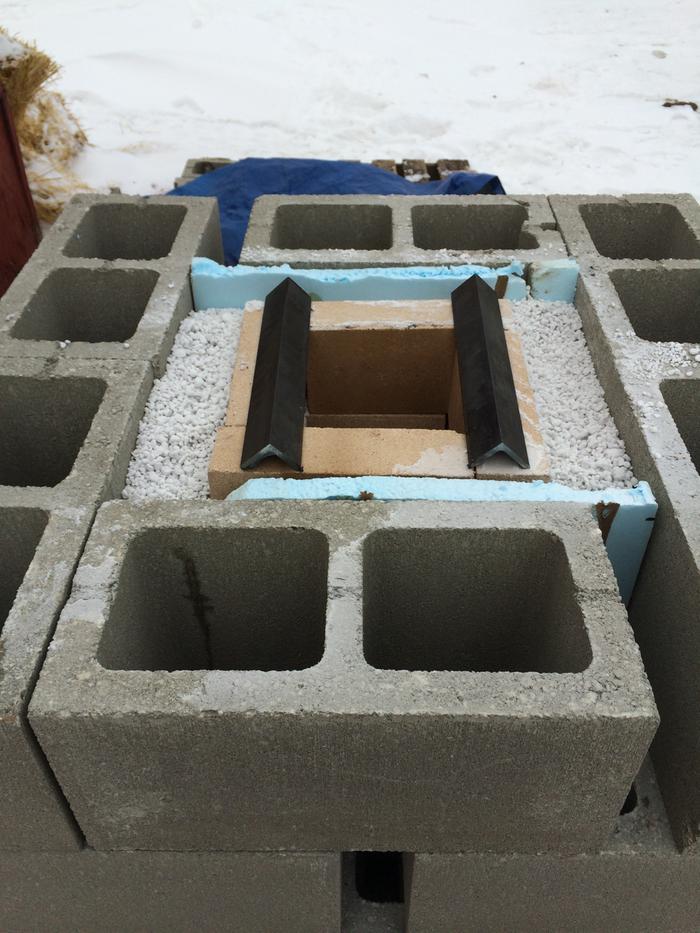 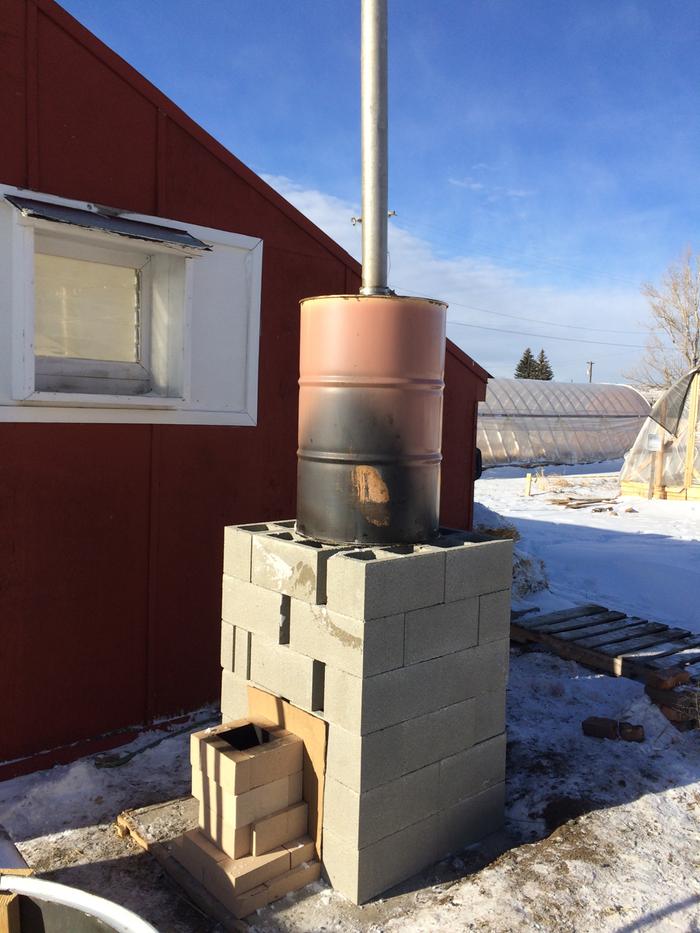 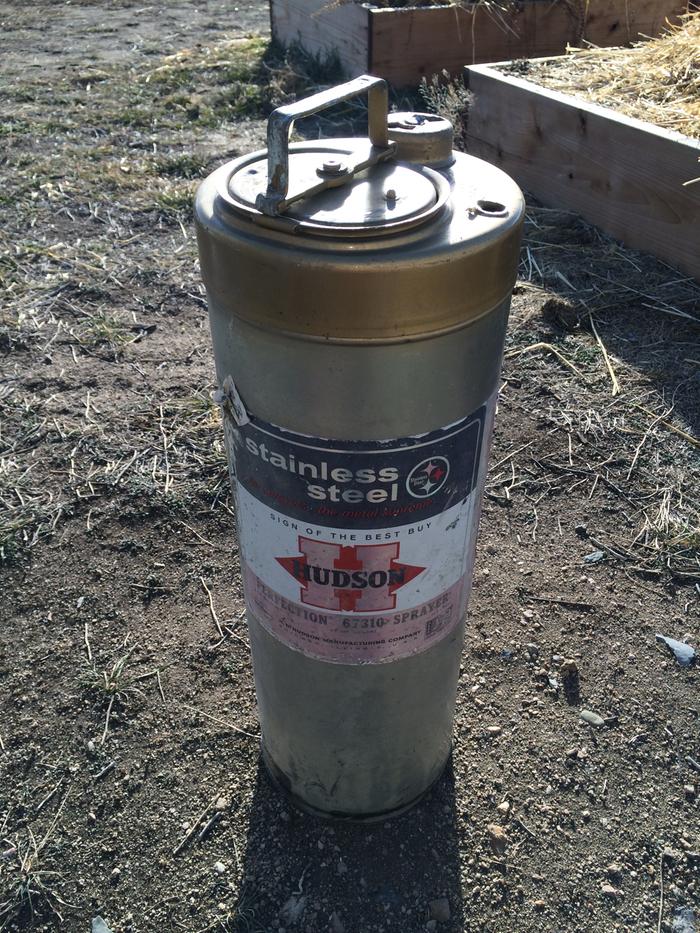 John Elliott
pollinator
Posts: 2392
88
posted 6 years ago
How long did you cook this and how hot did it get?

You need to get that retort up to at least 400F to start charring the stuff on the bottom. As it cooks it may transfer heat up and make the layer of char on the bottom thicker. And it is going to take time. A long time, as in "I don't know what happened in the kitchen, I must have left the range on when I went out to go shopping because when I came back two hours later, dinner was all burnt to a char" time. I'm thinking your rocket stove is a little undersized to provide that much heat, especially since I see all that snow on the ground in the picture.

Even if you rig up that barrel to support a top-lit updraft (like in this other post of mine), it takes at least a couple of hours for the top of the fire to char its way down to the bottom of the barrel.
Mike Daniel
Posts: 18
posted 6 years ago
Thanks for the input! It was right at 32 degrees farenheight outside today. I am not sure exactly what temperatures the kiln reached, I haven't purchased a thermometer yet. Because this was my first burn I was unsure of how long to burn, but I stood there for 2.5 hours and continually added wood as other logs had burned down. I then added wood from salvaged pallets and they actually seemed to have burned better. I want to try with a different retort, one with material other than stainless steel.
Mike Daniel
Posts: 18
posted 6 years ago
Also, here is the rocket stove without the added insulation.
image.jpg 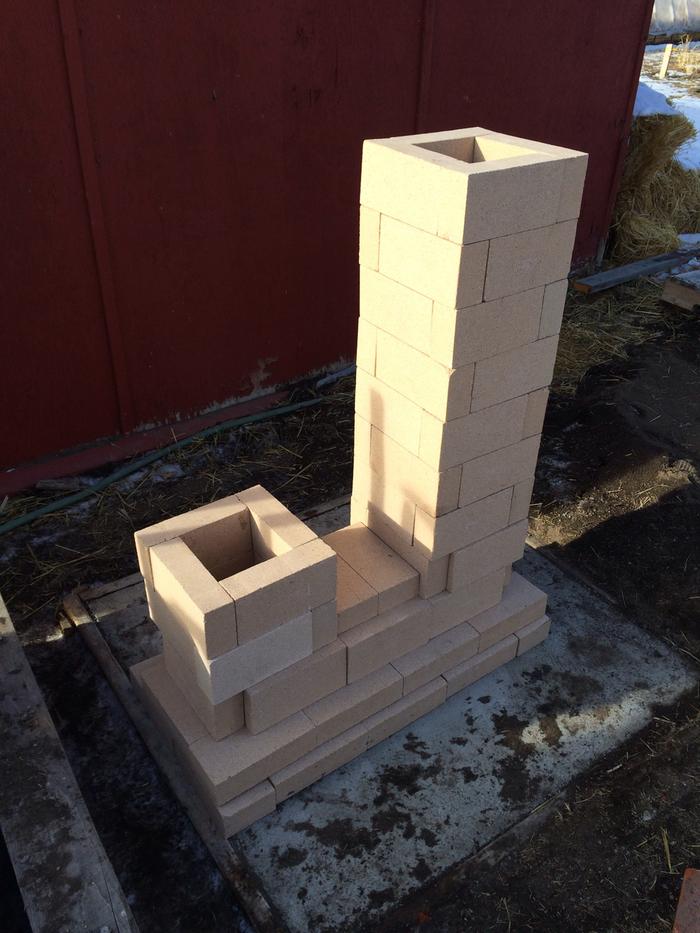 Jeff Buck
Posts: 4
Location: Denver, Colorado
posted 6 years ago
Hello, Jeff here. Long time lurker, first time poster. I've been here studying to build a RMH at home. I've been dissuaded from the basement so it'll be for the workshop/greenhouse or outdoor seating, maybe on the front porch. We live in a neighborhood where the houses were built back when people were generally more social so the porch is a good one (concrete and brick and big).

Anyway, I'm also interested in biochar and noticed this thread. I want to make sure I understand your setup. I think the steel vessel in the third picture is your retort which sits on the angle iron and the flue gas from the stove passes around but not through the retort. Put another way, the pipe going off the top of the second photo is a chimney for the retort only, not for rocket stove gas. Is that right?

If so and you get the load to char, I think you'll get a lot of pretty nasty exhaust out the top of it. That's all unutilized fuel ... and nasty.

The second photo in this thread shows a way to get at that fuel that seems compatible with your setup. Once pyrolysis begins, combustion of exhaust gasses in the burn tunnel could eliminate the need for additional wood fuel at some point if well designed. A chimney like yours would probably help it draw better. But I imagine quite a bit of gunk could condense out of the smog on the way down that pipe to the burn tunnel so I have to wonder if it's prone to clogging.

Two years ago, I taught my 7th grade class how to make biochar using the instructional materials found here. We made TLUD stoves out of soup cans and developed a rubric to evaluate the charcoal. These were scaled down versions of the type linked to by John Elliott earlier. It was a BLAST and I will never again hesitate to teach kids about fire in a serious and intelligent way (we did it in science class).

At the end of the project, students shared some of their research on other ways to make biochar. There's some pretty sophisticated, hand made systems being used out there, but I like simple. This is one of my favorites, sort of a collapsed version of yours. An L- shaped rocket stove is built right into the retort itself. The heat riser is not insulated and becomes the heat exchanger for the load in the retort. The pipe out it's top is from the rocket stove, not the retort and there's a small port from the retort into the burn tunnel near its mouth. Once the wood releases enough gas to produce a steady flow, it keeps the process going without additional wood though I suspect it gets hot enough to burn off some of the carbon rather than leave it as charcoal. It seems well made to me but looks like it might be dangerous which definitely got the kids' attention.

Some students proposed building one of these and a barrel sized TLUD to see if one did a better job than the other. An accessory for a J-type rocket stove such has you have built would be an interesting comparison too. But alas, summer arrived and I didn't teach science the next year. There are still photos of kids firing their stoves hanging around the school. I wonder how many of them could still describe what's going on in the stove or detail the differences between the pyrolysis of the wood and the intense after burn swirling around the secondary air ports. They've all continued to high school but I still see some of them. I'll ask.

Thank you for the input. Very interesting project with your 7th graders, I am actually speaking to a couple of 7th and 8th grade classes next week about this material. Do you have any advice on that? I have been trying to get creative with my powerpoints and teachings aids, I do not want to lose the student's interest, and I also do not want the material to be over their heads.

When I fired this kiln up the other day, it burned very clean, you could not see and smoke coming out of the chimney, but, none of the biomass inside the retort charred (I think its because I was using stainless steel, which is very heat resistant). If the material did char I was thinking that the pyrolysis gasses would just flare off in the chamber, but I eventually do want to re-route those gasses to be burned off at the start of the J-tube. The chimney you see is just connected to the 55 gallon barrel, the bottom of that barrel is completely cut out and placed over the smaller keg (pictured above). It is kind of a closed system. Ideally, the chimney has the same area as the portion of the rocket stove where wood is loaded to be burned. As heat rises through the chimney it creates a... siphon I guess is one way to put it, a push/pull type motion with the air flow, that is the idea anyways. The heat travels around the smaller keg that is used at the retort. Hope that makes sense?
R Scott
pollinator
Posts: 3551
Location: Kansas Zone 6a
68
posted 6 years ago
I am going to guess you didn't get hot enough. You should have burned more paint off the barrel than that.